People at high risk of developing bowel cancer are being denied a ‘life-saving’ £200 test on the NHS, a charity has today warned.

Four in five hospitals across England are not testing patients for a condition called Lynch syndrome – a genetic condition which significantly increases a person’s risk of the disease.

Testing for the condition can help guide the treatment of current patients but also determine whether or not their families are at increased risk of bowel cancer.

Deborah Alsina, chief executive of Bowel Cancer UK and Beating Bowel Cancer, said: ‘The price of testing for Lynch syndrome is peanuts – only £200 per patient.

‘CCGs need to loosen the purse strings as the price of testing for Lynch syndrome far outweighs the cost of treating bowel cancer patients.’

Lynch syndrome is an inherited condition passed down through families – children of people with the condition have a 50/50 chance of developing it.

It has no symptoms but people who have it have a significantly higher risk of developing bowel cancer and other cancers.

The test to identify the condition costs just £200 and is recommended by the National Institute for Health and Care Excellence.

But the UK’s leading bowel cancer charity Bowel Cancer UK and Beating Bowel Cancer found that 83 per cent of hospital trusts are not following official guidelines to test all bowel cancer patients at the time of their diagnosis for Lynch syndrome.

The charity received responses to Freedom of Information requests from 153 hospital trusts in England.

It found that among those who do not provide the genetic test for the condition, nine in 10 cited financial reasons as the main barrier.

The charity, which released the findings to mark Bowel Cancer Awareness month in April, said clinical commissioning groups (CCGs) – which commission services in each region of the country – need to ‘loosen the purse strings’ and ensure funding is available for the test.

Ms Alsinah said: ‘Until there is clear local and national leadership and a firm commitment to improve the services for people at high risk of developing bowel cancer, the estimated 175,000 people who carry this inherited faulty gene will continue to fall through the gaps of health bodies such as the NHS and CCGs because they are reluctant to take responsibility.

‘At the moment, hospitals are being pushed from pillar to post, with no organisation being held accountable.

‘A lack of funding and resources from CCGs means that hospitals’ hands are tied. Until these issues are being addressed, generations of families will continue to be devastated by cancer and lives will be needlessly lost.’ 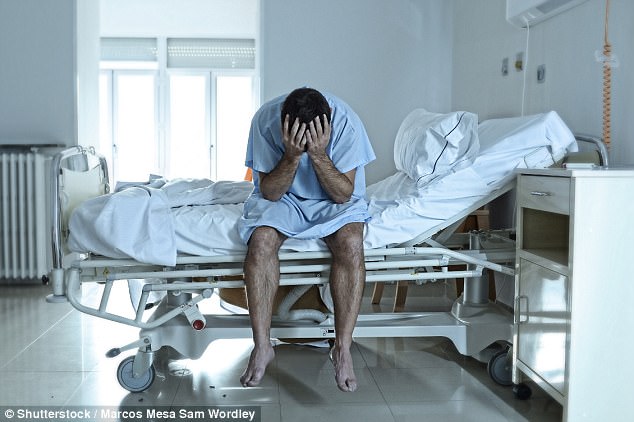 CCGs around the country have been subject to a number of controversies concerning their funding decisions recently.

Earlier this month, for instance, some CCGs were criticised for introducing guidelines that would refuse surgery to smokers and obese patients.

The deadlines were accused of being ‘draconian and discriminatory’ by the Academy of Medical Royal Colleges.

For example, in York, the regional CCG will implicate a policy that anyone needing surgery who has a Body Mass Index of 35 – which is very obese – or who smokes will be referred onto Prevention and Better Health Strategy program for six months.

Obese patients will be sent to weight loss and exercise classes while smokers will be offered smoking cessation counselling and nicotine patches.

The program is supposed to encourage healthier lifestyles.

Meanwhile, in February, the Bath and North East Somerset CCG announced it would deny women fertility treatment if their partners were obese – despite there being no evidence obesity affects male fertility.

Professor Allan Pacey, a male fertility expert at Sheffield University, said: ‘I can only conclude that CCGs are making up their own rules in order to ration funding.’