Police have found the bodies of a family of four, including an 8-month-old girl, who were kidnapped at gunpoint from their trucking business in central California.

Merced County Sheriff Vern Warnke said that all four victims were found dead in a rural farm area on Wednesday night, saying that his ‘worst fears have been confirmed’.

‘We found the four people from the kidnapping and they are in fact deceased,’ said Warnke. ‘There is no words to describe the anger I feel, and the senselessness of this incident.’

He added, referring to the killer: ‘There’s a special place in hell for this guy, and what we’re going to deal with tonight is bad.’

It came just hours after police released shocking surveillance footage that showed the moment the hard-working Sikh family was kidnapped at gun point.

Victim Jasleen Kaur, 27, was kidnapped along with her husband Jasdeep Singh, 36, their eight-month-old daughter Aroohi Dheri and her 39-year-old brother-in-law Amandeep Singh from their newly-opened trucking business on Monday morning.

Suspect Jesus Salgado, 48, was arrested on Tuesday in Merced, California, after he used one of the victim’s ATM cards, though he has yet to be formally charged with the kidnapping and murders. 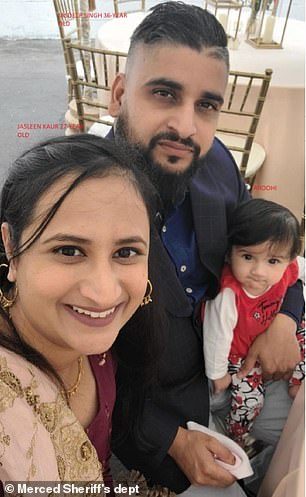 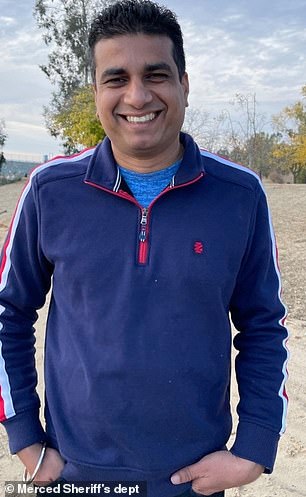 The bodies were found in a orchard near Indiana Road and Hutchinson Road, by a farm worker who immediately contacted authorities, officials said.

The video released earlier on Wednesday shows the kidnapper first walking up to the family business at the intersection of Dickenson Ferry Road and South Highway 59 in Merced County.

The kidnapper is carrying a trash bag filled with unknown items, which he sets down as he pulls a gun from his waistband. 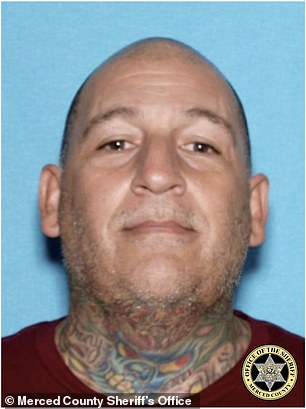 Jesus Salgado, 48, was arrested Tuesday in Merced, California, after he used one of the victim’s ATM cards.

Later, it shows him leading the male victims, who had their hands zip-tied behind their backs, into the back seat of Amandeep Singh’s pickup truck.

The kidnapper then went back to the trailer that served as the business office and led Jasdeep Singh, who was carrying her baby in her arms, out and into the truck before the suspect then drove away.

Family members said nothing was stolen from the trucking company but that their relatives were all wearing jewelry.

Merced County Sheriff Vern Warnke said that after the kidnappings, an ATM card belonging to one of the victims was used in Atwater, a city about 9 miles north of Merced.

Warnke said the kidnapper made no ransom demands in what he believes was a financially motivated crime.

Authorities in Merced County were attempting to speak with the hospitalized suspect, Salgado, to determine whether another person was involved, Sheriff Warnke said.

“Until we get some kind of conversation going with the suspect, we are not 100 percent,” Warnke said of Salgado, who attempted to take his own life before being taken into custody.

“I fully believe that there was one other person involved. We don’t have any evidence to support that. It’s just the circumstances surrounding this.” 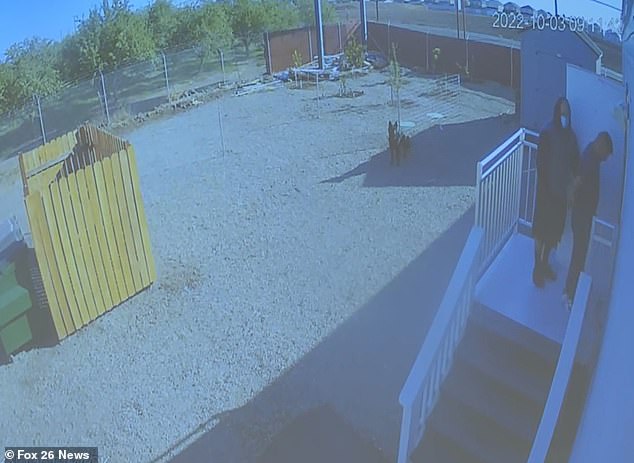 Video footage shows the suspect leading the men, who had their hands zip-tied behind their backs, into the back seat of Amandeep Singh’s pickup truck 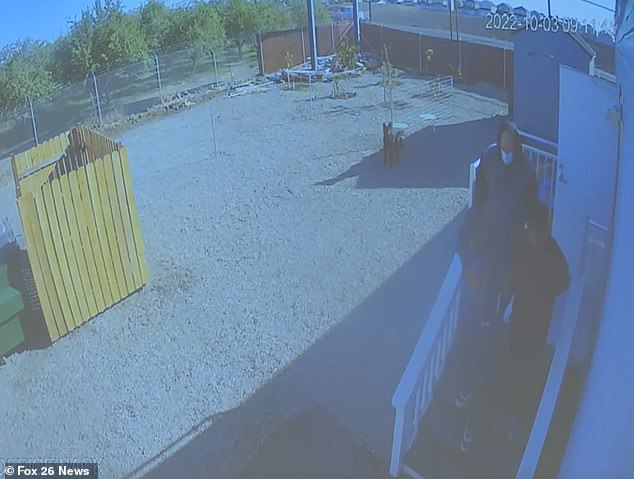 The men, with their hands tied behind them are then led to the truck

Before the heartbreaking discovery of the bodies, relatives of the victims asked anyone who owns a convenience store or gas station in the area to check their surveillance cameras for images of the suspect or the family.

‘Please help us out, come forward, so my family comes home safe,’ Sukhdeep Singh, a brother of the victims, said, his voice breaking.

Relatives of Jesus Salgado, 48, contacted authorities reporting that he had admitted to them he was involved with the kidnapping, Warnke told KFSN-TV on Tuesday.

Salgado tried to take his own life before police arrived at a home in Atwater, and he has since been hospitalized, he said.

Warnke said detectives have not been able to speak to Salgado, who has been under medical sedation in the hospital, but they are hoping to do so Wednesday with the help of doctors.

‘I can tell you that every time he has even come near consciousness he has been violent,’ Warnke said. 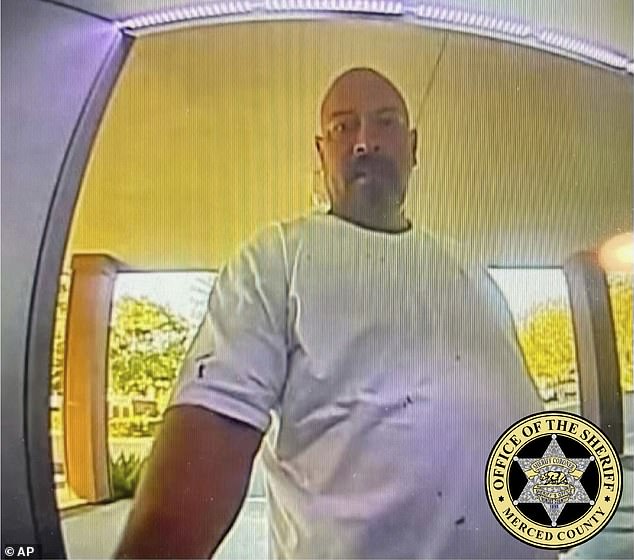 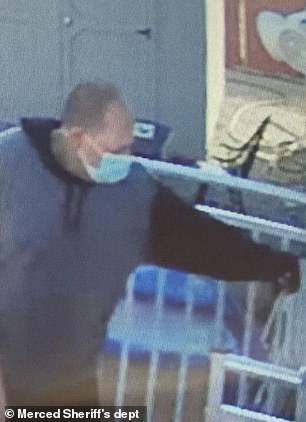 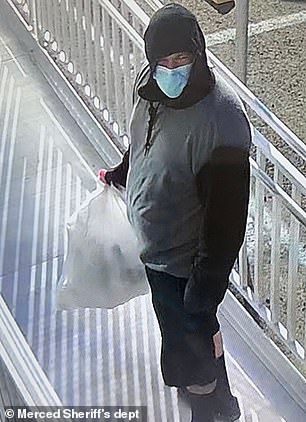 Earlier in the week, police released these images of the suspect- now believed to be Salgado

Salgado was previously convicted of first-degree robbery with the use of a firearm in Merced County, as well as attempted false imprisonment and an attempt to prevent or dissuade a victim or witness.

He was sentenced to 11 years in state prison in that case, according to the California Department of Corrections and Rehabilitation.

He was released from prison in 2015 and discharged from parole three years later. He also has a conviction for possession of a controlled substance, the corrections agency said.

Investigators have not found a link between Salgado and the family to show they knew each other before the kidnapping.

‘As of right now, we believe it was random,’ Deputy Alexandra Britton said. ‘We don’t have evidence to prove otherwise.’

Family members told KXTV-TV that the office for Unison Trucking Inc., the family’s business, had only opened about a week earlier.

‘My husband is very peaceful and calm person. We don’t have any clue why they kidnapped them,’ said Jaspreet Caur, wife of the kidnapped uncle.

The sheriff said detectives believe the kidnapper destroyed unspecified evidence in an attempt to cover his tracks. 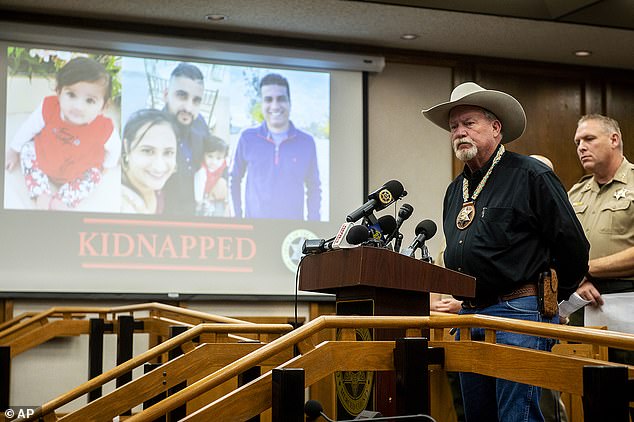 Officials have not yet revealed a motive for the kidnapping, and the family remains missing

The sheriff’s office said that firefighters on Monday found Amandeep Singh’s truck on fire. Merced Police Department officers went to Amandeep Singh’s home, where a family member tried to reach him and the couple.

When they were not able to reach their family members, they called the Merced County Sheriff’s office to report them missing, the office said.

Merced County Undersheriff Corey Gibson said a farmer found a phone belonging to one of the victims on a street in Dos Palos, a town 30 miles southwest of Merced, and answered it when the family called it.

Warnke said that while detectives have not established any motive or determined whether Salgado worked with any accomplices, he believes the suspect was driven by money and colluded with someone else.

‘I fully believe that there was at least one other person involved,’ the sheriff said, noting that he does not have any evidence to back that up.

He added: ‘My speculation is that it’s financial.’

The sheriff’s office said the FBI, the California Department of Justice, and other local law enforcement agencies are helping with the investigation.