Four men have been arrested on suspicion of murder after a man in his 30s was found dead outside of a post office on Boxing Day.

The man was found on Eston High Street in Eston, north Yorkshire at around 8.30pm by officers.

He was found seriously injured by paramedics before being pronounced dead at the scene.

According to police, the four men currently in police custody on suspicion of murder are aged 29, 30, 32 and 38.

The man in his 30s was found on Eston High Street, in north Yorkshire, outside of a post office at around 8.30 pm on Boxing Day

The victim has yet to be formally identified.

The male victim died after being found seriously injured in flats on the High Street.

David Fisher, who owns Katie’s Cardz, said: ‘I came over last night, we were going to tidy the shop.

‘When I came over to drop everything off, they wouldn’t let us through. 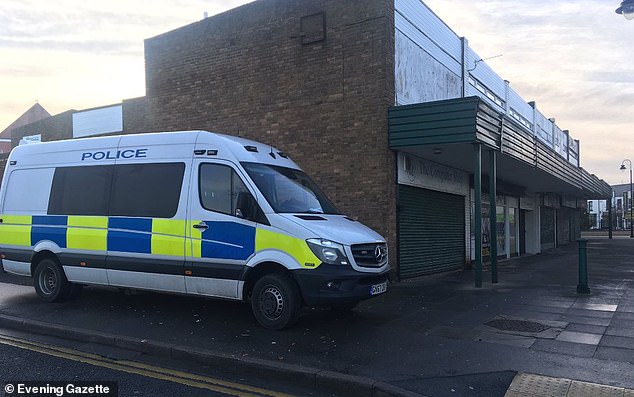 ‘The ambulance was still there, they were in and out, waiting for detectives to come. ‘We knew then it was a fatality. I thought, ”God, it’s somebody’s son or daughter”.

‘It is the family we have got to feel sorry for. Nobody deserves that.’

The 59-year-old, from Eston, said he believes that the flat are privately rented by a letting agency. He said: ‘It is young lads that get put into the flats. ‘We have had some lunatics in these flats.

‘I would hate to think what it will be like in 10 years time if the government and local authority don’t start to tackle this.

‘We have definitely got a problem with gangs. ‘You pray for rain because they won’t be there.

‘Every old age pensioner will tell you they don’t come out.’ 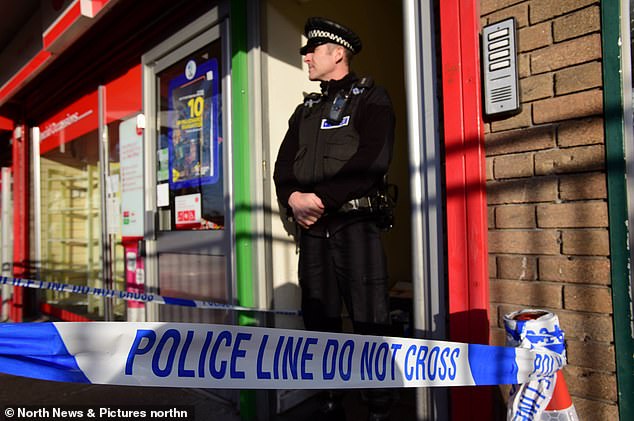 Police forensic officers could be seen combing through the scene for evidence.

A Cleveland Police spokeswoman said: ‘Four men, aged 29, 30, 32 and 38, have been arrested on suspicion of murder and are currently in police custody.

‘The man has not yet been formally identified and while we understand residents may feel concerned by this incident, we do not believe there is any risk to the wider public at this time.

‘Officers will remain in the area providing a reassuring presence and continuing inquiries into the circumstances surrounding the man’s death.

‘We would ask anyone who may have seen or heard anything suspicious in the area yesterday afternoon or evening to contact Cleveland Police in complete confidence via the 101 number.

Information can also be passed anonymously to the independent charity Crimestoppers on 0800 555 111 or www.crimestoppers-uk.org