Four people are shot dead at a home in Missouri before suspected gunman exchanges fire with police and flees on foot, sparking a seven-hour manhunt

Four people were fatally shot inside a St-Louis-area home, and the suspect exchanged gunfire with police as he fled just after midnight Friday before being taken into custody just after dawn in a convenience store where he had sought shelter.

Three victims were found dead inside the home in St Charles, Missouri, a city of about 70,000 people on the Missouri River northwest of St Louis.

A fourth victim was taken to a local hospital and died there, according to St Charles Police Lt Tom Wilkison.

Police stopped the suspect as he tried to drive away from the home, and a short gun battle followed.

The suspect then fled on foot, tried unsuccessfully to steal a woman’s car, stabbed her and fled again on foot. Her injuries were not life-threatening, authorities said.

The suspect was taken into custody at a convenience store a few miles away at about 7.30am Saturday. He also was injured, and Wilkison said he remained in a local hospital Saturday.

Four people were fatally shot inside a home in St Charles, Missouri, (pictured) on Friday night before the suspected gunman fled on foot, sparking a seven-hour manhunt 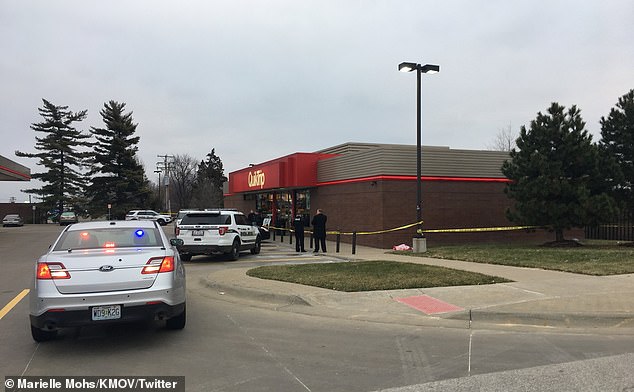 The male suspect, whose name has not been released, was captured at a QuikTrip convenience store at around 7.30am Saturday. Police are pictured on the scene

Police were called to the scene by a call from within the home a few minutes before midnight Friday, though they were not saying who made it.

‘During that phone call, the 911 operator could hear gunshots in the background,’ Wilkison told The Associated Press.

Authorities were not releasing the names of the victims, pending notification of their relatives.

They also did not name the suspect or provide details about the weapon he used or his potential motives.

Authorities also did not know whether he was injured while exchanging shots with police or at another time.

Officers from multiple law enforcement agencies and helicopter and SWAT units converged in the neighborhood where the shootings occurred and cordoned it off but couldn’t find the suspect. He was reported at the convenience store about seven hours later.

‘My sense is that he went in there, was seeking shelter. It was really cold last night,’ said Capt Scott Will of the Major Case Squad of Greater St Louis, leading the investigation. 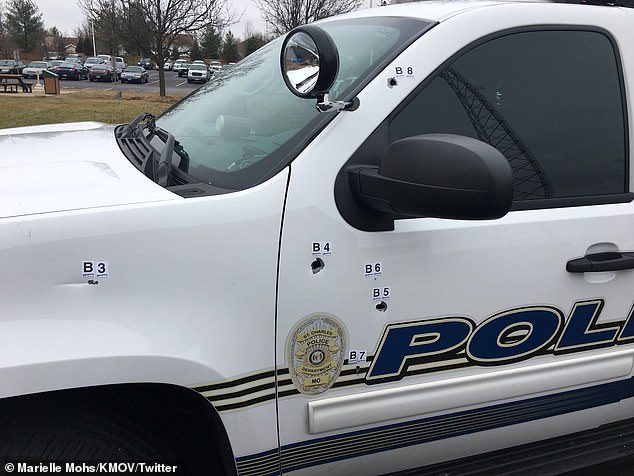