Two US soldiers and two American civilians have been killed after an ISIS suicide bomber blew himself up outside a restaurant in Syria.

A US official who declined to be named confirmed the casualties after an explosion in the city of Manbij earlier in the day.

The attack marks the biggest single loss of life by US force during the Syrian war. Only two servicemen had been killed prior to Wednesday’s blast, along with two non-combatants.

Alongside the two American troops killed, a third was a civilian Defense Department employee, the Pentagon said.

The fourth American killed was a contractor supporting the U.S. effort in Syria.

It comes after Donald Trump ordered US troops to withdraw from the country, claiming ISIS had been defeated.

The Britain-based Syrian Observatory for Human Rights said 16 people died in total including at least nine civilians while dozens more were wounded.

Local reports suggested the soldiers were inside the restaurant when a bomber detonated their device outside.

ISIS propaganda agency Amaq said the terror group was responsible for the attack.

‘A suicide attack carried out with an explosives vest hit an international coalition patrol in the city of Manbij,’ the organisation said via social media.

Video from the scene showed a coalition helicopter landing to take the injured away.

U.S. military Col. Sean Ryan said they were ‘aware of open source reports regarding an explosion in Syria.’

He added: ‘Coalition forces conducted a routine patrol in Syria today. We are still gathering information and will share additional details at a later time.’

One of the men was said to have been ‘very seriously’ hurt while the other escaped with non-life-threatening injuries’. 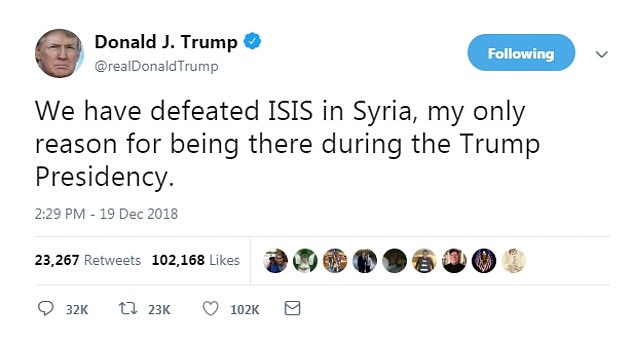 The blast comes almost a month after President Trump called for US forces to withdraw from Syria, claiming the ISIS had been defeated 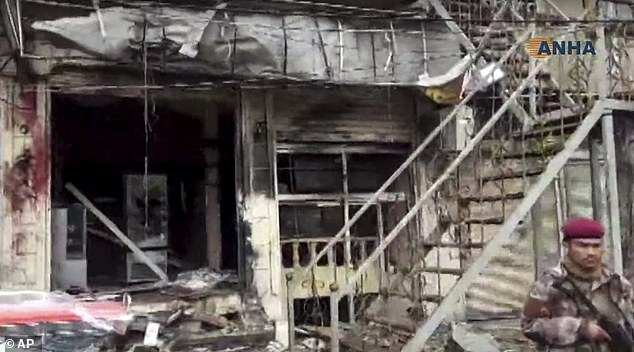 A total of 16 people, including at least nine civilians, were killed in the blast according to the Britain-based Syrian Observatory for Human Rights

The blast comes as America begins withdrawing from Syria following Donald Trump’s shock announcement that he was bringing all troops home.

Ground equipment started being withdrawn from the country last Thursday, according to CNN, with the exact timetable for full withdrawal unclear.

While Trump has made it clear that all 2,000 troops would be leaving with Turkey taking over the fight against ISIS, other administration officials have been less clear.

John Bolton, Trump’s National Security Adviser, said the US would not leave until it had received guarantees from Turkey that its Kurdish allies would not be attacked.

Turkey considers some Kurdish groups, including those who helped in the fight against ISIS, to be terrorist organizations.

Manbij, which has been occupied by Kurdish YPG forces since they seized it from ISIS in 2016, has become a flashpoint in the withdrawal plans.

The YPG fear that, after America has gone, towns like Manbij will be attacked by Turkey in an attempt to drive them out.

American troops began patrolling Manbij several weeks ago in an attempt to stave off attacks by Turkish-backed Syrian forces which occupy several nearby towns.

Kurdish forces also reached out to Damascus, which is controlled by dictator Bashar al-Assad, for assistance as tensions grew.

Syrian government troops began massing near the town shortly after Christmas, according to The Guardian.