Four-year-old is left on an unstaffed ward after a six hour operation, mother, 32, claims

A four-year-old boy was left on an unstaffed ward all night after a six-hour operation, his appalled mother has claimed.

Faye, 32, who declined to disclose her surname, was at her son’s bedside at Russells Hall Hospital, West Midlands, on October 16 after he had a routine operation to control an ear infection.

Jackson reportedly went without any check-ups or medication all night. His mother was even forced to go looking for a nurse when emergency bells were ignored, only to find empty corridors.

Faye told MailOnline: ‘The level of care from the nurses was despicable.’

Russells Hall Hospital in Dudley has been under investigation this year after inspectors rated its emergency care as ‘inadequate’ in a report.

Fifty-four deaths between January and June were ordered to be investigated by The Care Quality Commission (CQC). 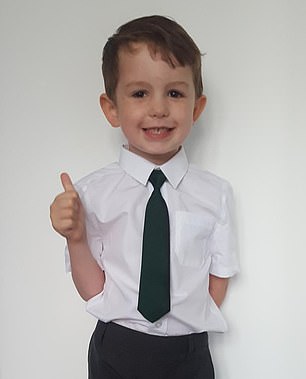 Mother Faye, 32, claims her son, Jackson, was left unattended all night at Russells Hall Hospital, West Midlands after a six-hour operation to resolve an ear infection. He is pictured left on the ward on October 16 and right fully recovered after the incident 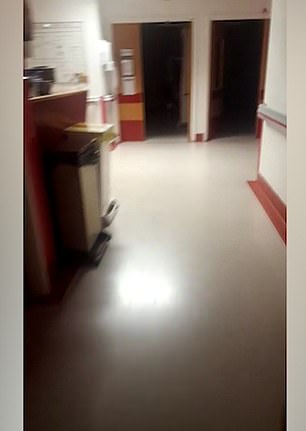 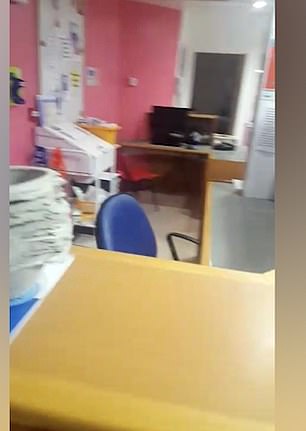 Faye filmed the empty corridors of the ward when she left her four-year-old son’s bedside to desperately search for nurses, who she claims did not come when she rang the emergency bell

Jackson was born with the serious bacterial infection mastoiditis, which affects the mastoid bone behind the ear.

After his symptoms were dismissed as a minor ear infection for years, he was eventually diagnosed at three years old, with him now requiring a mastoidectomy – a surgical ‘clear-out’ that removes diseased cells in his ear – every year.

Mastoiditis is a serious bacterial infection that affects the mastoid bone behind the ear.

The most common cause of mastoiditis is a middle ear infection  that has been left untreated.

Most people with mastoiditis recover quickly and have no complications as long as the condition is diagnosed and treated quickly.

The symptoms of mastoiditis typically include:

Cholesteatoma can also cause mastoiditis. This is an abnormal collection of skin cells inside the ear which may prevent the ear draining properly, leading to infection.

Mastoiditis is a serious infection and should be diagnosed and treated quickly with antibiotics.

You may need to go to hospital so antibiotics can be given directly into a vein through a drip.

In some cases, surgery may be needed to drain the middle ear (a myringotomy) or remove part of the mastoid bone (mastoidectomy).

Treatment isn’t always easy and the infection may come back.

If the mastoid bone is severely infected and isn’t removed, it can cause hearing loss and life-threatening health complications such as a blood clot, meningitis or a brain abscess.

Last month’s operation was Jackson’s second routine mastoidectomy and took four hours longer than expected due to his condition being extremely severe.

When surgery finished at 6pm, Jackson was taken to a day ward, where Faye believes all the other patients had been discharged or moved to the night ward.

‘No-one came with antibiotics and no-one came to check his vitals every few hours,’ she said.

‘The nurse on the ward came to me at around 8pm to say she was heading home and someone will be taking over, and will be bringing the antibiotics for Jackson and a bed for me.

‘It got to 10:15pm and the bed and antibiotics hadn’t arrived yet.

‘I didn’t want to leave Jackson on his own for too long. I pressed the emergency call button to get someone’s attentions and it was going off for at least four minutes but no-one arrived.

‘It was at this point I had to try and find someone. That’s when I took the videos.’

Faye also noticed multiple red marks on a computer screen at the ward’s reception, which she believes represented the number of children whose check-ups were overdue.

After finding a nurse, Faye was given a bed 20 minutes later, but she claims Jackson’s antibiotics never arrived.

The youngster should have been given antibiotics immediately due to him developing a blood clot infection after his first mastoidectomy, his mother claimed.

‘Food from his tea was also left at the end of his bed all night,’ she said.

‘I was woken up early [the next] morning when someone came to take Jackson’s vitals, which should be checked every two hours after surgery, but that was it.’

Jackson was discharged the next morning with his antibiotics, with Faye believing her son missed two or three doses.

She even thinks her son has suffered lasting physical effects from the traumatic night.

‘He’s quite resilient because he is used to the pain he has had all his life,’ Faye said.

‘But now he has bald patches, which doctors say are from the stress of the operations.

‘Children at school are commenting on it’, she said. 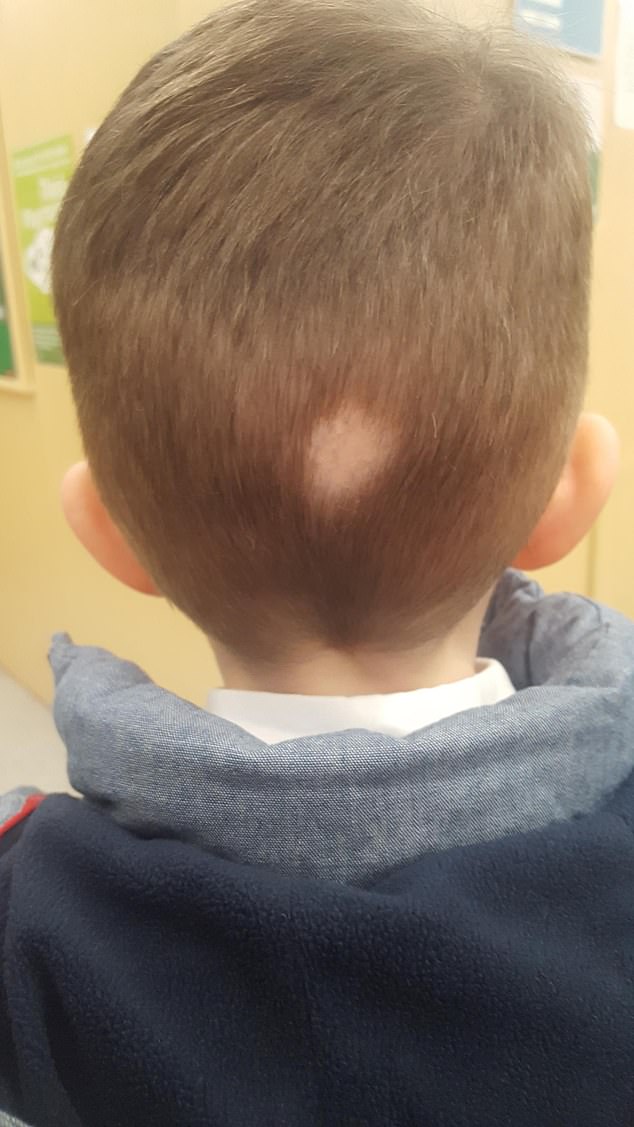 Jackson has since developed bald patches on his head from the stress of the operation, according to doctors, which children at school have commented on

After his first mastoidectomy at Russells Hall Hospital eight months before the incident, Jackson and his mother hoped his mastoiditis had been cured.

However when they got home, the youngster’s face suddenly began to swell.

‘He’d been in surgery for six hours, so I thought it might be normal,’ Faye said.

‘But his head just kept growing and growing through the night. When he woke up I could see his eyes were shut.

‘We went back to hospital and they said go home and see how it progresses, but we were back that night.’

Faye was told she to drive her son to Wolverhampton New Cross Hospital, half-an-hour away, for an emergency operation. 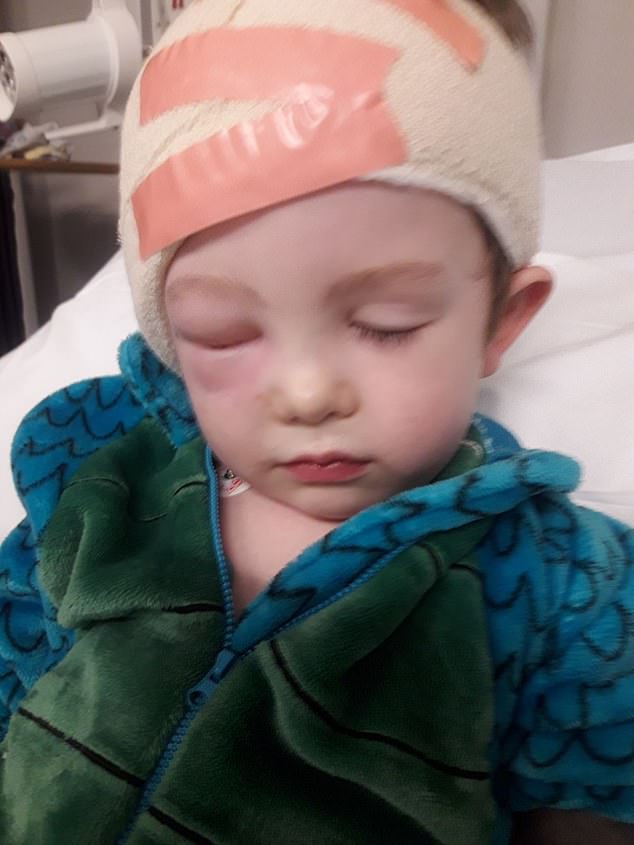 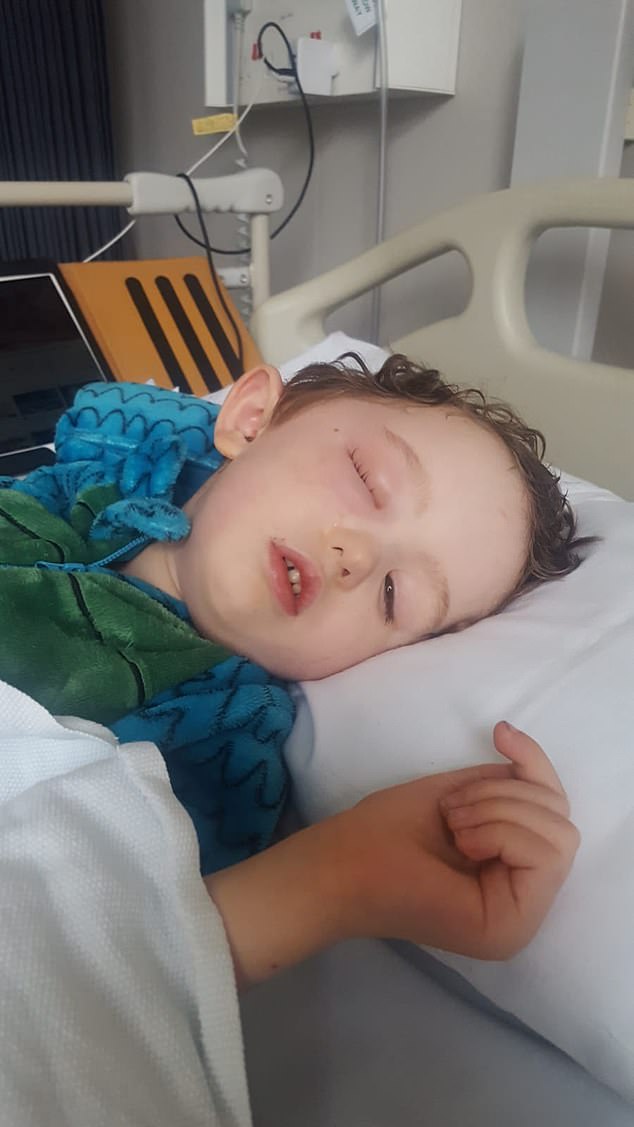 Doctors had to remove a blood clot infection from behind Jackson’s ear at Wolverhampton New Cross hospital (pictured), where his mother claims he received ‘traumatising’ aftercare

Although the surgery went well, Faye describes the aftercare at Wolverhampton New Cross as ‘horrendous’ due partly to there being no pillows on Jackson’s bed. She even had to go to Argos to buy her pillows.

Faye added: ‘Where the infection had been removed, it hadn’t been properly dressed, and so it was leaking onto his shoulder and clothes.’

The nurses also struggled to get a cannula with antibiotics into Jackson’s hand, attempting up to 16 times, until his hand was bruised, she claimed.

‘It was the most traumatic time of my life’, Faye said. ‘They applied aesthetic cream on his band but it had worn off. They even asked me to hold Jackson down whilst he was crying.

‘They were going to try his feet but I stepped in and said “no more”. He was traumatised and I wanted them to give him gas but they refused. It was disgusting.

‘They managed to get the cannula into his hand in the end.

‘A nurse gave me a form and said please complain because nothing will change if you don’t’, she said. She never officially filed a complaint.

Although outraged by the level of care Jackson received, Faye added: ‘I’m not complaining about the system as a whole – if it wasn’t of them he might not be alive at all.’ 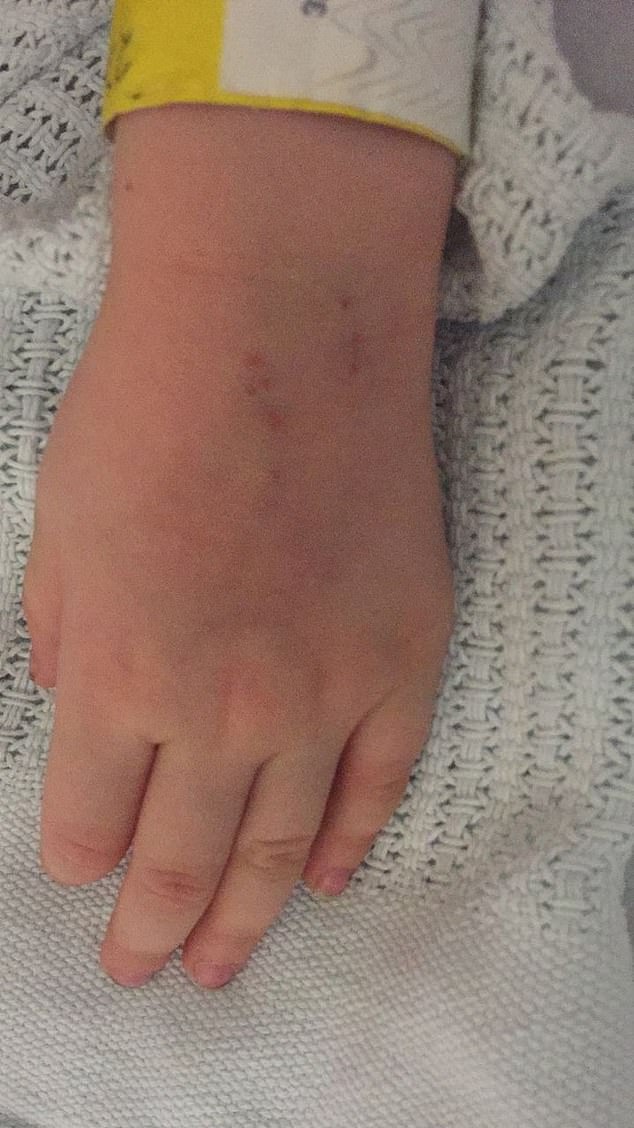 Nurses at Wolverhampton New Cross Hospital attempted to get a canula into Jackson’s hand 15-16 times, according to Faye, who was asked to ‘hold him down’ while he screamed 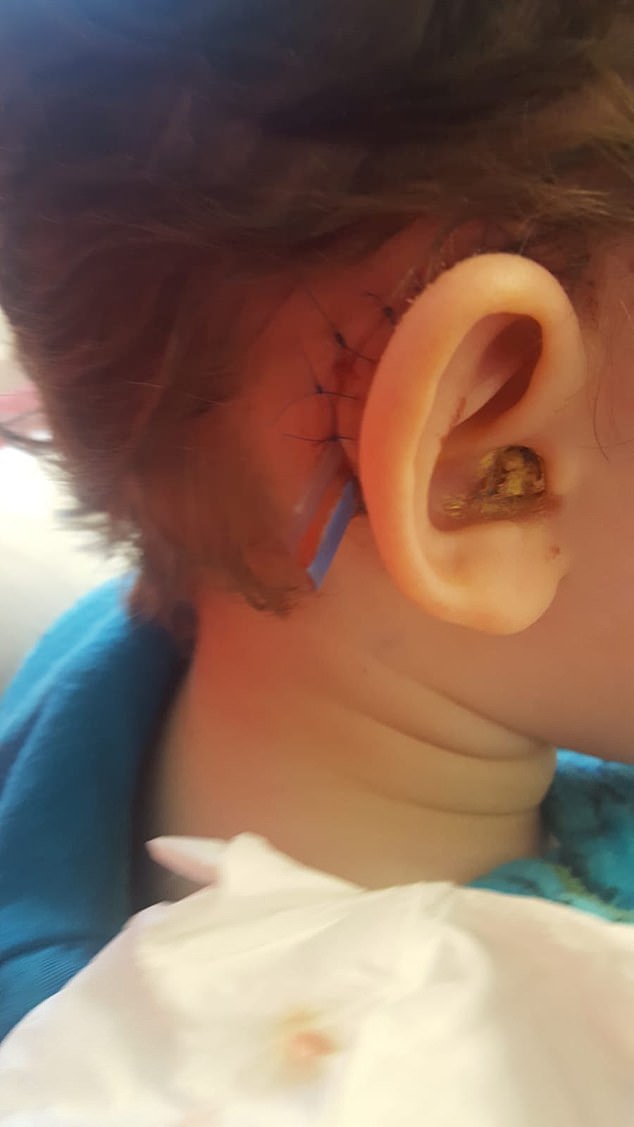 Jackson’s surgery wound was ‘leaking down his shoulder and clothes’

Jackson has since been told his infection still has not cleared up and is moving closer to his brain.

‘They’ve said he will need surgery again and it will be within the next 12 months’, Faye said. ‘It relives me that it’s not so bad that it is an emergency. But I’m very worried that it’s close to brain.’

Doctors started prescribing Jackson with antibiotics for ear infections when he was just seven months old.

At one year, Faye recalls Jackson began to sweat profusely but his temperature was not high enough to go to hospital.

It was not until he was three that Jackson was diagnosed with mastoiditis when it became so severe he was bleeding from the ear, by which time he was already partially deaf.

‘I was concerned he was living off antibiotics. In the end I said no more, and that’s when they referred me to a specialist,’ Faye said.

‘They removed a polyp [small lump] they thought was causing the infection. But when it returned, they finally gave him a scan and found the mastoiditis.

‘It took ages to finally get down to it for something that could potentially kill him.’

Speaking of the discharge that came from her son’s ear, Faye said: ‘The smell was like death. There was gunk on his pillow so I’d have to wash his bedsheets every day. He gets very hot and is sweating through the night.

‘It was hard to give him a hug because the smell was so bad, even though we had cotton wool by his ear all the time.’

‘When he was diagnosed I didn’t know what it was and I when I looked it up, I read that it was the main cause of child fatalities, or at least it was at an earlier time. I was very worried.’

‘I was a bit p***** off it had taken three years of infections for them to find it out.

‘He is now 90 per cent deaf in the one ear and needs multiple surgeries possibly for life.’

Russells Hall Hospital, run by the Dudley Group NHS Trust, was blasted by inspectors last month, with its A&E department being described as ‘inadequate’.

An investigation into 54 deaths over six months found patients with suspected sepsis were made to wait 11 hours for life-saving treatment.

Dudley Group NHS Trust Hospital’s chief executive Diane Wake said it was ‘too late for many people’ who had suffered as a result of poor care.

Faye intends to make a formal complaint to the hospitals involved, worrying until now that doing so would put her out of favour and jeapordise Jackson’s treatment.

Diane Wake, Chief Executive at Dudley Group NHS Foundation Trust, which is in charge of Russells Hall Hospital, said in a statement:

‘We cannot comment on the specifics of any patient’s care without their express consent. However, we can confirm that we have four day case beds on our children’s ward at Russells Hall Hospital. A nurse is allocated to the station overseeing these beds and our patients are never left unsupervised.

‘We have no record of a complaint relating to a child and this procedure. When we do receive complaints, we take them seriously and do all we can to improve patient care.’

Wolverhampton New Cross hospital has been contacted for comment.