Four-year-old suffered a stroke from the chickenpox

A four-year-old girl was forced to relearn how to walk and talk after the chickenpox caused her to have a stroke.

Sophie Fuller has been left permanently brain damaged and with limited use of her right arm after suffering a stroke in what doctors have called an ‘extremely rare’ case.

Since the incident last July, Sophie, of Clydebank, West Dunbartonshire, requires 24-hour care and has to take blood-thinning injections twice a day.

Although still affected by the health scare, the youngster has returned to nursery and has even learned to ride an adapted tricycle.

Sophie Fuller was forced to relearn how to walk and talk after the chickenpox caused her to have a stroke last July. She is pictured recovering in hospital in August 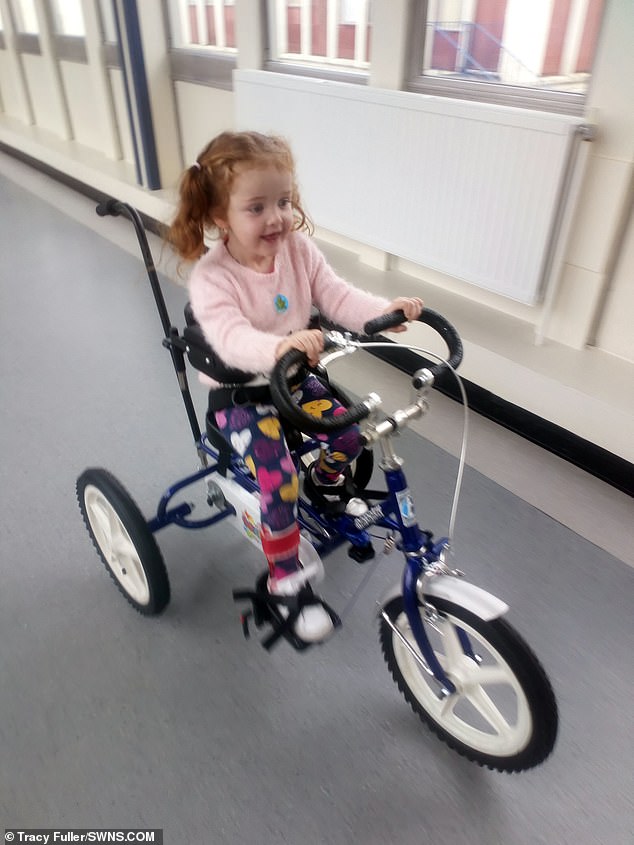 Sophie Fuller has been left permanently brain damaged and with limited use of her right arm. She is pictured earlier this month riding a specially-adapted tricycle 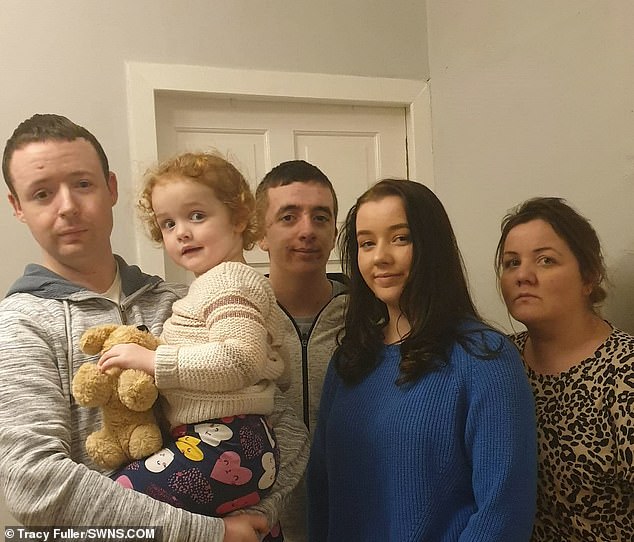 Sophie’s mother Tracy Fuller (right), 33, says their family is ‘living in fear’ that she will suffer a second stroke, with the blood vessels in her brain still being dangerously narrow. She is pictured being held by her father Edwin, 32, with her siblings Courtney, 15, and Connor, 17

Five out of every 100,000 children has a stroke in the UK every year. Research has shown chickenpox can increase the risk of the condition in youngsters.

The virus behind chickenpox is thought to cause blood vessels in the head to narrow, according to the Stroke Association.

Four months on, the blood vessels in Sophie’s brain are still very thin, which puts her at risk of suffering a second stroke.

Her mother Tracy Fuller, 33, said: ‘Sophie will always be at risk. It’s affected her mentally and physically.

‘We keep her in our bedroom and don’t let her sleep on her own.

‘We are living in fear, making sure she is breathing, but we are a really strong family and have a lot of support.

‘This is going to be a long journey. This has completely changed our lives.

‘You’re living every single day and you’re reminded what happened.’ 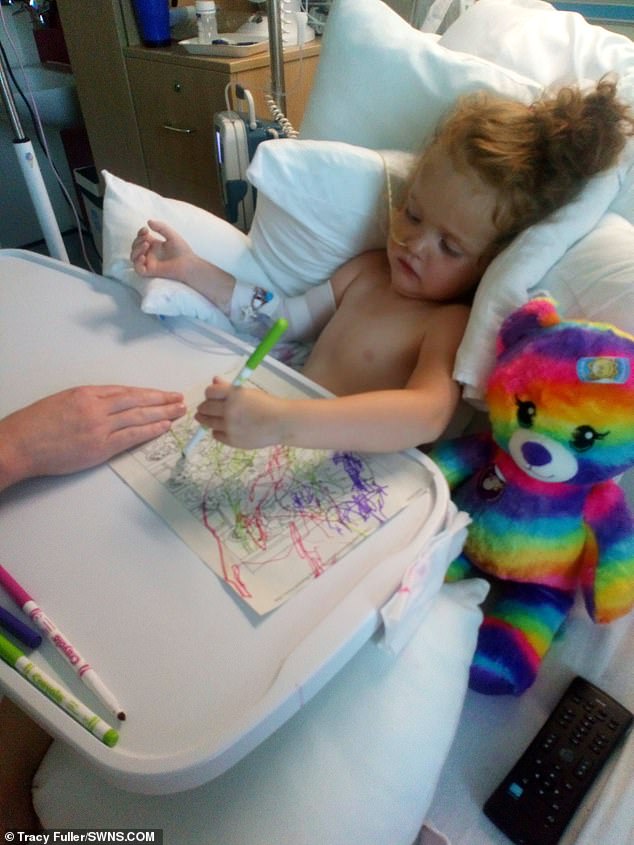 Sophie fell out of her bed last July while suffering from the chickenpox. Her father picked her up, only for the youngster to have a seizure in his arms. She is pictured that month in hospital 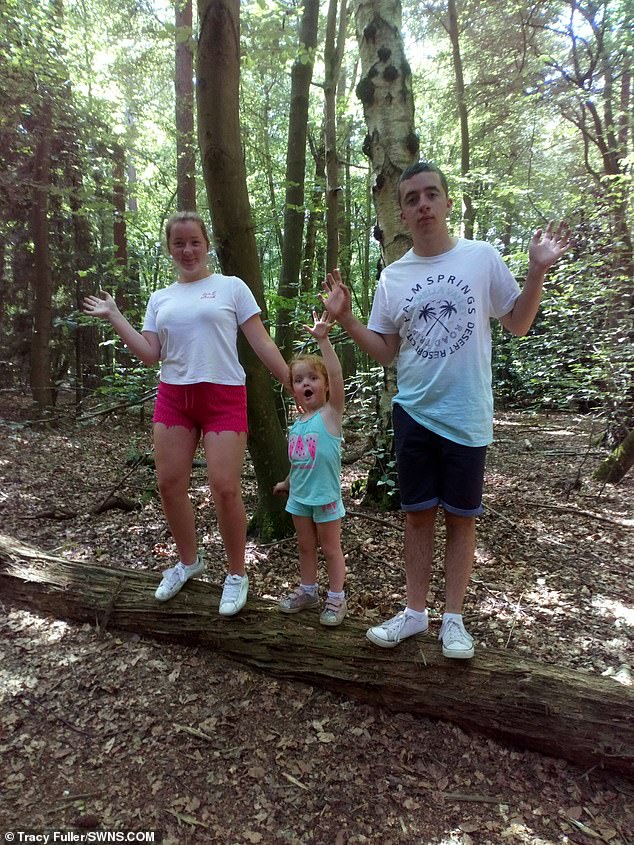 Pictured on holiday last June with her siblings, Sophie now requires 24-hour care and is forced to endure blood-thinning injections twice a day to prevent her suffering a stroke again

CAN CHICKENPOX CAUSE STROKE?

Stroke has been reported as a ‘rare’ side effect of chickenpox.

Dr Tina Tan, professor of pediatrics at Northwestern University, told Today: ‘Basically, the chickenpox virus infects the large blood vessels in the brain and causes inflammation in them.

‘The blood vessels can scar and that can decrease blood supply to the brain, which can lead to stroke.’

Studies have shown children are most at risk six months after they first become infected with the chickenpox virus.

This can leave youngsters with permanent disabilities, including paralysis or seizures, depending on which blood vessels are involved, Dr Tan said.

Other scary complications can include the blistering skin rash shingles, meningitis, pneumonia and dehydration if pox lesions develop around the mouth.

Sophie’s father Edwin, 32, first knew something was wrong when he picked his daughter up after she fell out of bed, only for her to have a seizure in his arms.

Mrs Fuller, who is also mother to Courtney, 15, and Connor, 17, said: ‘When I saw her I panicked and said “she’s having a stroke” – it’s absolutely heartbreaking.’

An ambulance rushed the youngster to the Royal Hospital for Children, where she stayed for eight weeks.

‘We witnessed everything she went through,’ Mrs Fuller said. ‘They told us to keep talking to her.

‘All I wanted to know was whether she was going to be alright but nobody could tell me.

‘My husband realised how severe it was. It’s just the worst thing you can possibly imagine.

‘The hospital staff saved her life. We can’t thank them enough. We feel they are part of our family because of what they have done.’

Although still deeply affected by what happened, the family put on a brave face and are looking forward to taking Sophie to Disneyland Paris next month so she can meet her favourite Disney character – Beast from Beauty and the Beast. 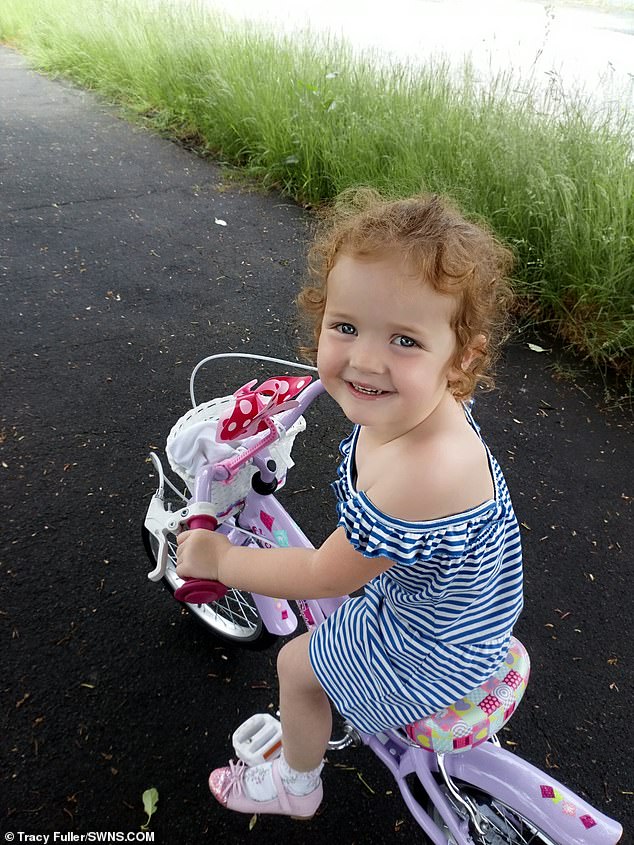 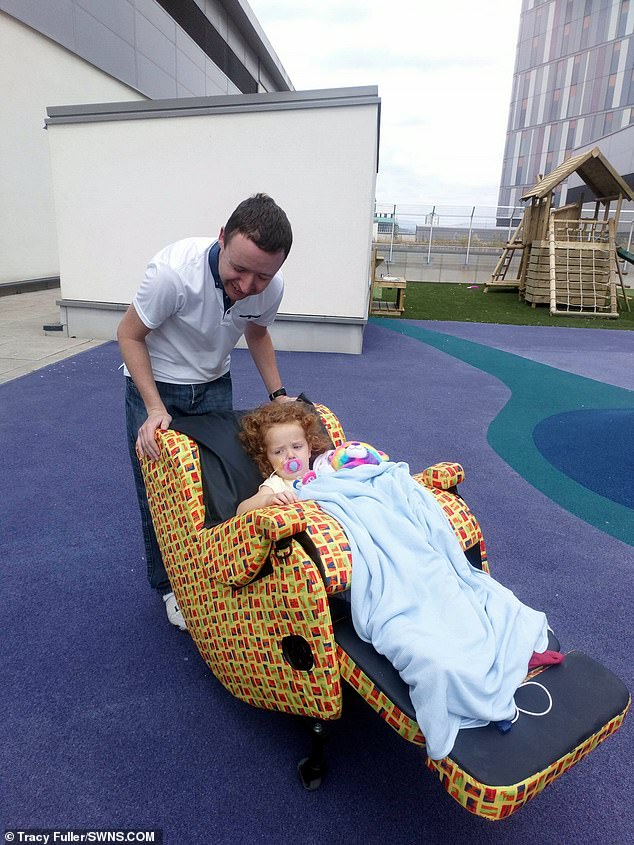 Sophie is pictured on the hospital rooftop last July being wheeled around by her father. Mrs Fuller claims he was more aware of how dangerous her condition was when she had the seizure 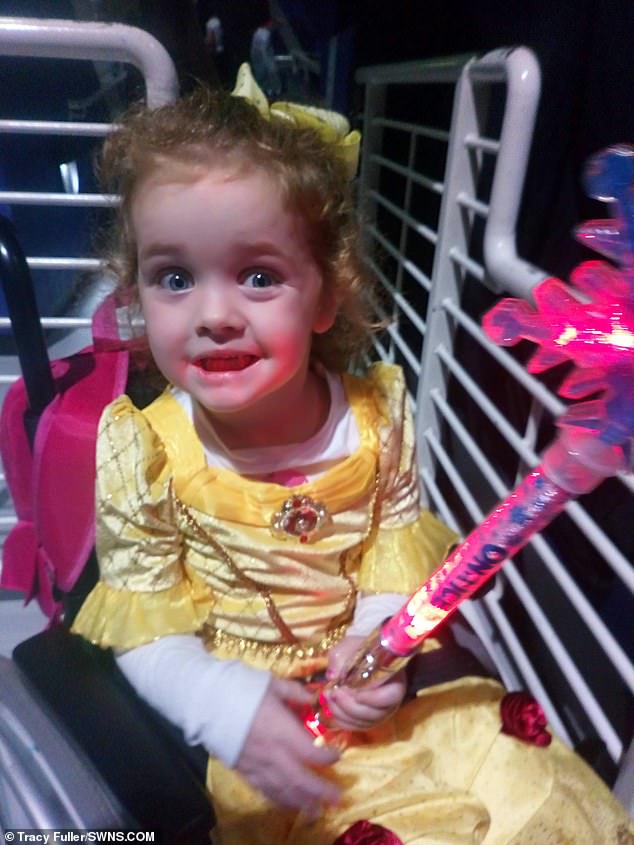 Despite what she has been through, Mrs Fuller describes Sophie as a ‘head-strong girl’. She is pictured in her wheelchair in September watching Disney on Ice. The family are taking the youngster to Disneyland Paris next month to meet Beast from Beauty and the Beast

‘The strength she has shown, we have got to keep going for Sophie – she needs us to keep going,’ Mrs Fuller said.

‘Every single day we get upset but we have to hide that from Sophie.

Doctors have told Mrs Fuller such a young child suffering a stroke is ‘very, very rare’.

‘No four-year-old should be experiencing this. Anyone can take a stroke at any age – I have learned so much,’ she said.

‘She’s come so far in only four and a half months. We are so proud of the journey she’s been through, and we want to thank everyone who supported us.’