Fourth caravan has left El Salvador to join others in Mexico

Some 2,000 migrants traveling in two groups departed El Salvador’s capital Wednesday morning on their way to the US by way of Mexico, making it the fourth caravan to embark on the 1,000-journey in the last two weeks.

This latest group hit the road even as President Donald Trump promised to send thousands of troops – possibly as many as up to 7,000 by some estimates – to secure the southern border and increased pressure on Mexico to halt the flow of people.

Police in San Salvador estimated the two groups leaving the capital numbered around 1,000 each. One cohort left around dawn, followed by a second later in the morning.

Some waved Salvadoran flags as motorists honked in support and shouted, ‘God bless you.’

This map shows the positions of all the caravans headed to the US, including the fourth group that departed El Salvador Wednesday 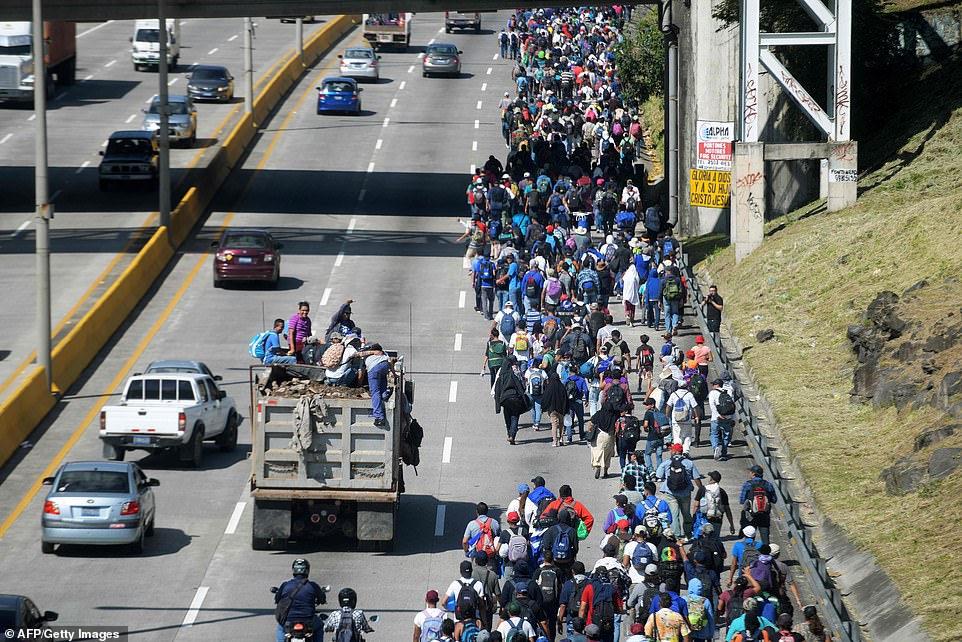 On their way: Some 2,000 migrants departed El Salvador’s capital of San Salvador Wednesday en route to the US by way of Mexico 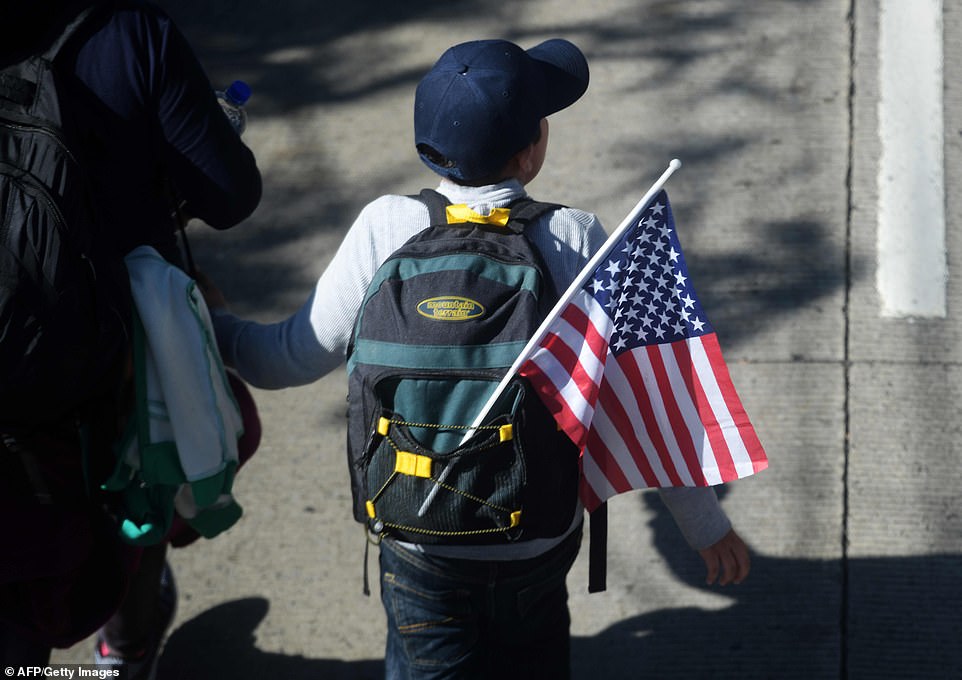 A boy with a US flag joins Salvadoran migrants embarking on a journey in caravan to the United States, in San Salvador 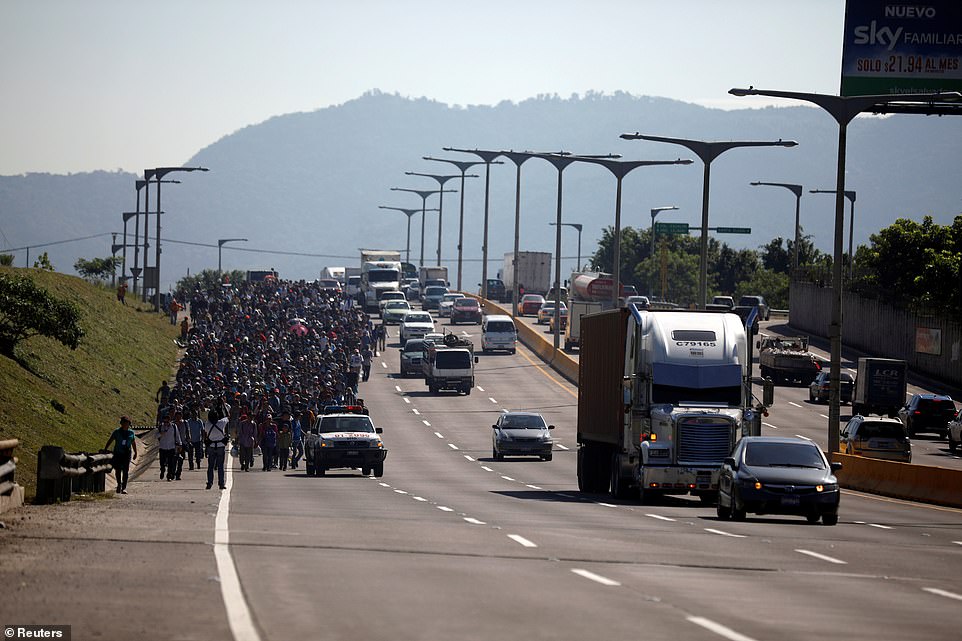 This is the fourth Central American caravan to have embarked on the 1,000-mile journey to the US border 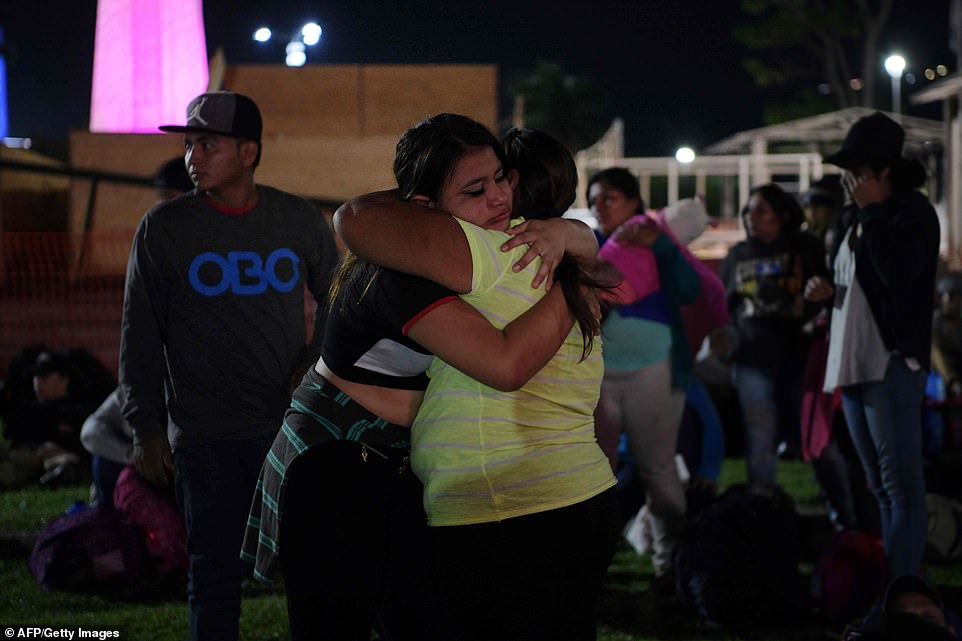 One group of about 1,000 migrants departed El Salvador’s capital of San Salvador at dawn Wednesday 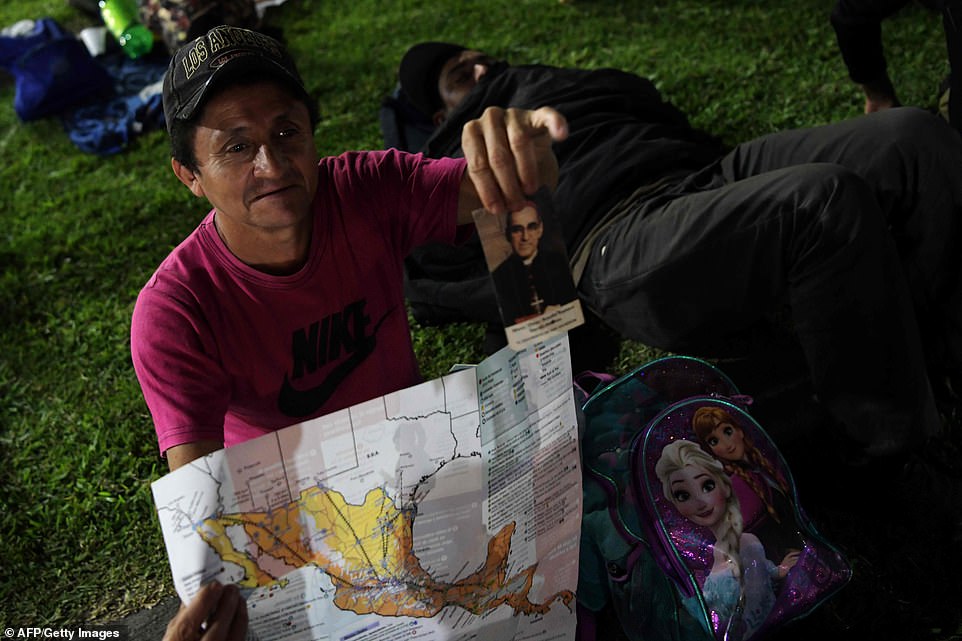 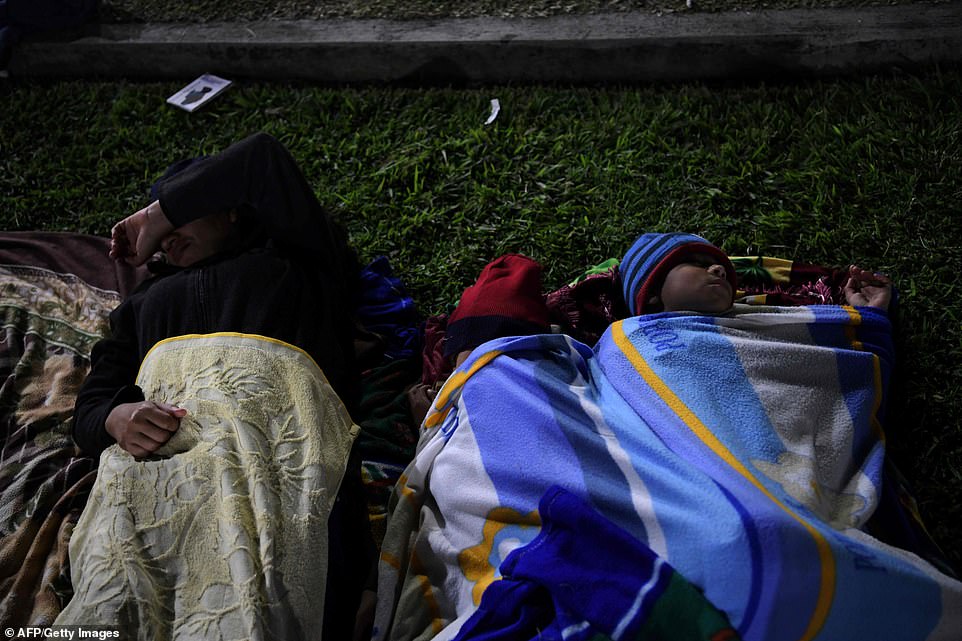 Salvadoran migrants rest, including children,sleep on the grass in the Salvador del Mundo Square before going on the road 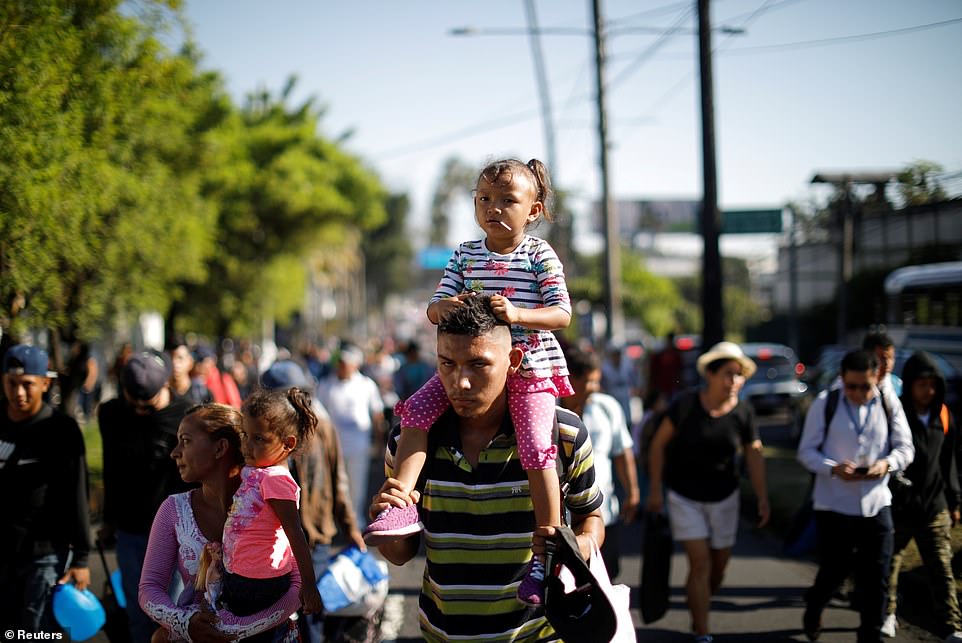 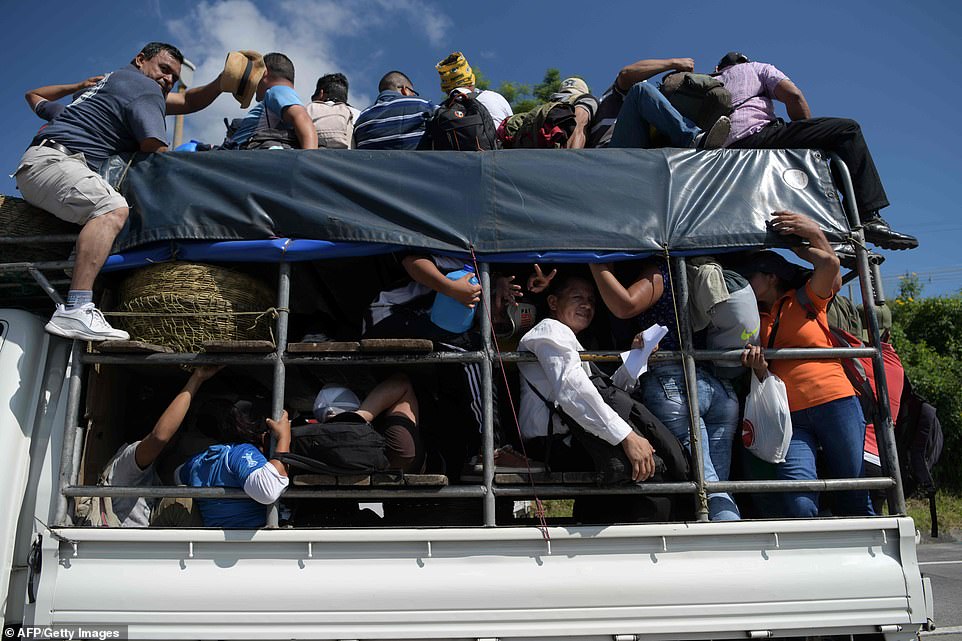 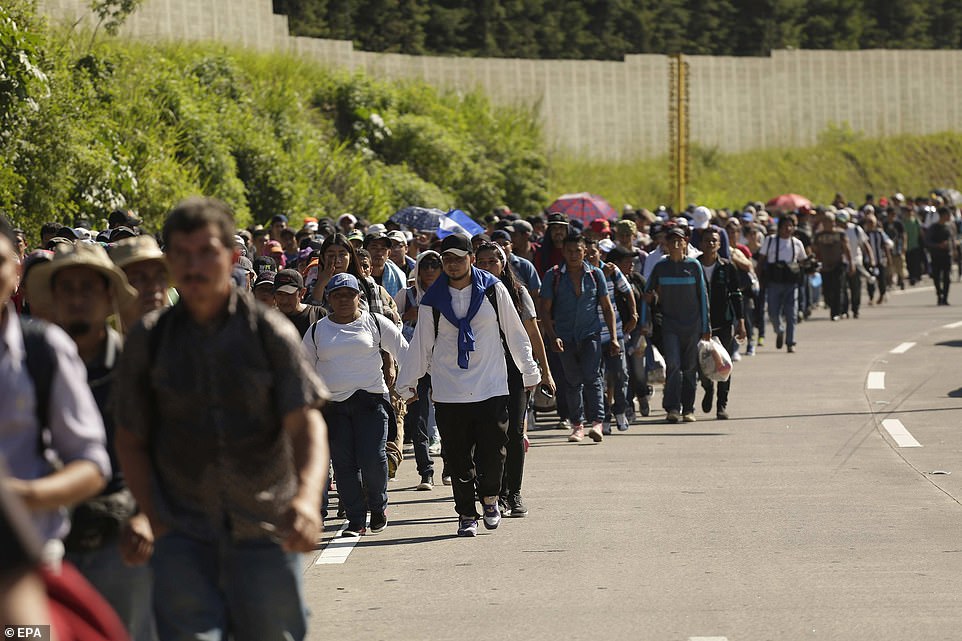 A second group of migrants numbering 1,000 took off from El Salvador in the morning Wednesday

The caravan included men and women pushing strollers and others with children on their shoulders.

On Sunday, a separate group comprising about 300 people set off for the US border from the Salvadoran capital.

The first caravan numbering 4,000 mostly Honduran national, which has been on the road for the past two weeks, planned to rest at least a day or longer in the southern city of Juchitan beginning Wednesday, hoping to organize mass transport northward after days of hard walking in scorching temperatures that have left them about 900 miles from the nearest US border crossing in McAllen, Texas.

‘We are waiting to see if they are going to help us out with buses, to continue the trip,’ said Omar Lopez, 27.

Organizers say the buses, if they do materialize, would take the migrants to Mexico City for meetings with legislators, not to the still-distant US border, though some would probably continue to the border after reaching the capital.

It’s unclear if Mexican authorities would agree to provide the vehicles, in light of White House press secretary Sarah Huckabee Sanders’ statement today praising the country’s leadership for stopping the migrants from getting rides.

‘Mexico has stepped up in an unprecedented way,’ Sanders told Fox News. ‘They have helped stop a lot of the transportation means of these individuals in these caravans, forcing them walking. They have helped us in new ways to slow this down, to break this up and keep it from moving as aggressively toward the United States.’

A second, smaller group, of 1,000 or so migrants who forced their way into Mexico on Monday was trailing some 250 miles back, stopping for the night in the city of Tapachula.

A third group of migrants from El Salvador legally crossed the international border bridge between Guatemala and Mexico on Tuesday and headed to Tapachula.

At a Tuesday evening assembly, participants in the first, largest caravan named a committee to negotiate with Mexican authorities over a possible ‘bridge plan’ that could carry them the 700 miles separating Juchitan from Mexico’s capital by bus. 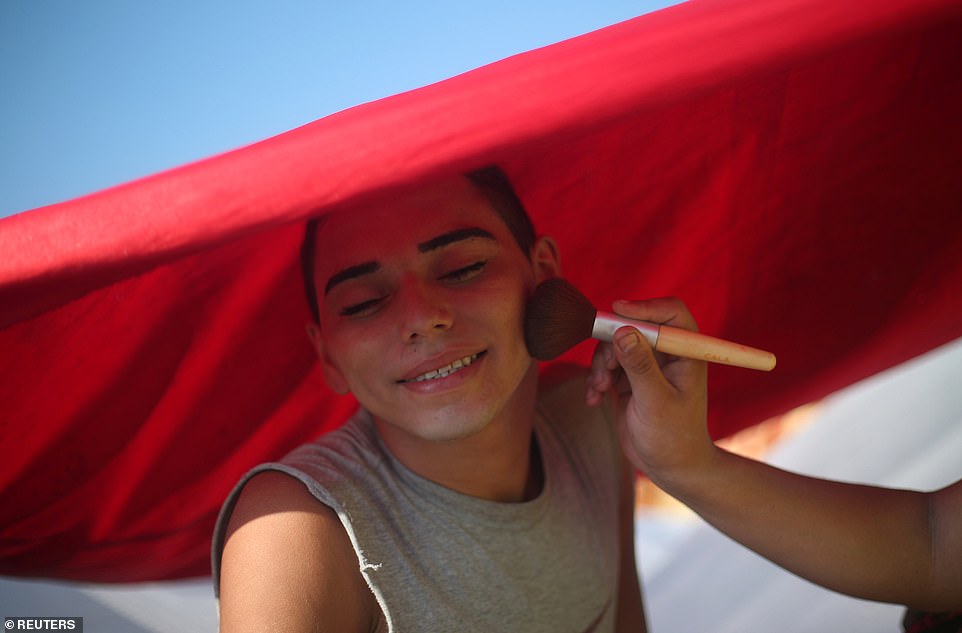 Transgender migrant Nati Vanegas, aged 18 from Honduras, part of a caravan of thousands traveling from Central America en route to the United States, has makeup applied whilst resting in a makeshift camp in Juchitan 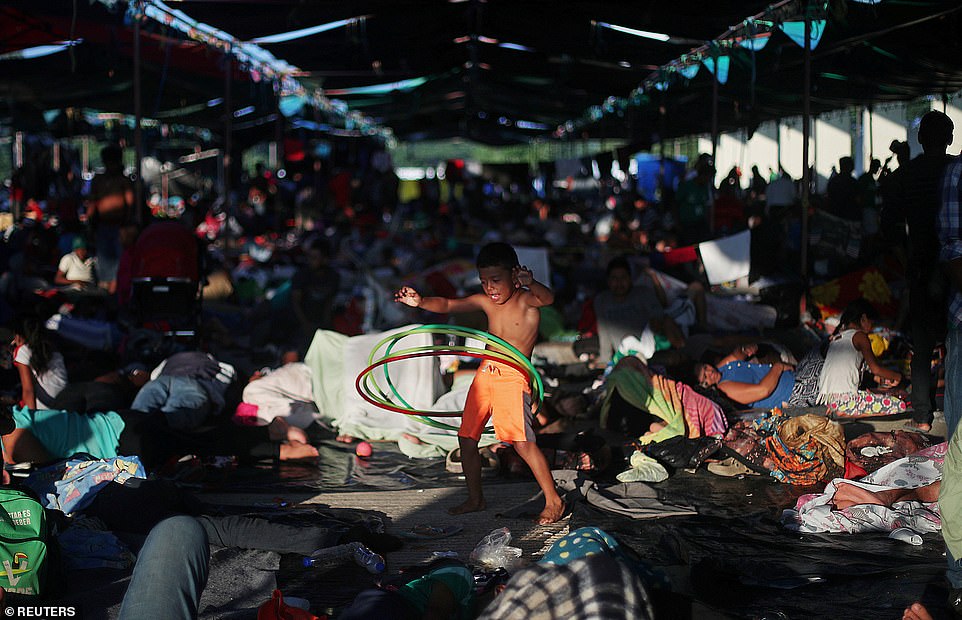 Osman Joel Hernandez, a six-year-old migrant boy, plays with a hula hoop as he rests in a makeshift camp in Juchitan 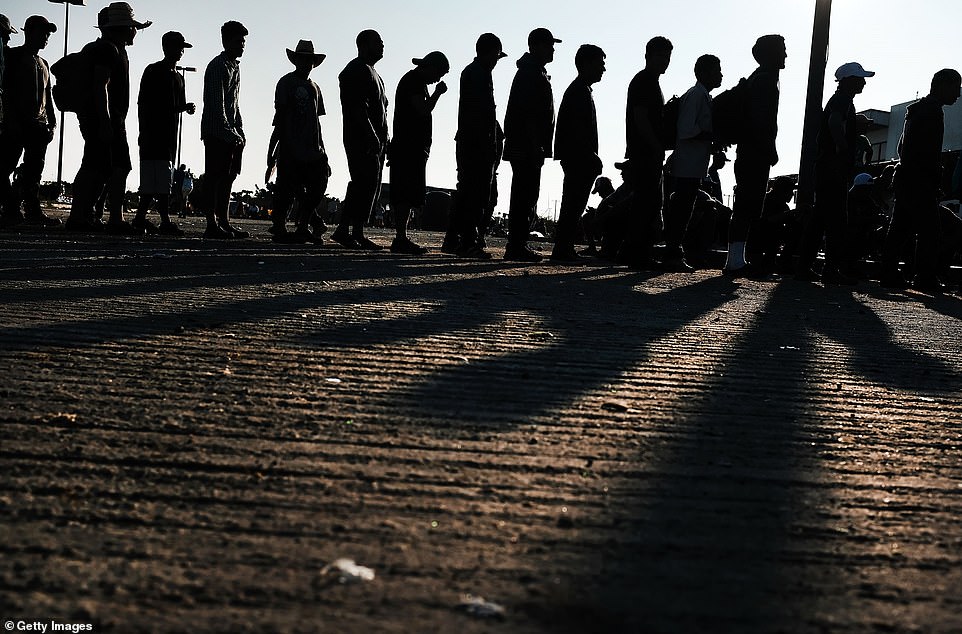 Members of the Central American caravan line up at dawn for food in a camp on October 31, 2018 in Juchitan de Zaragoza, Mexico 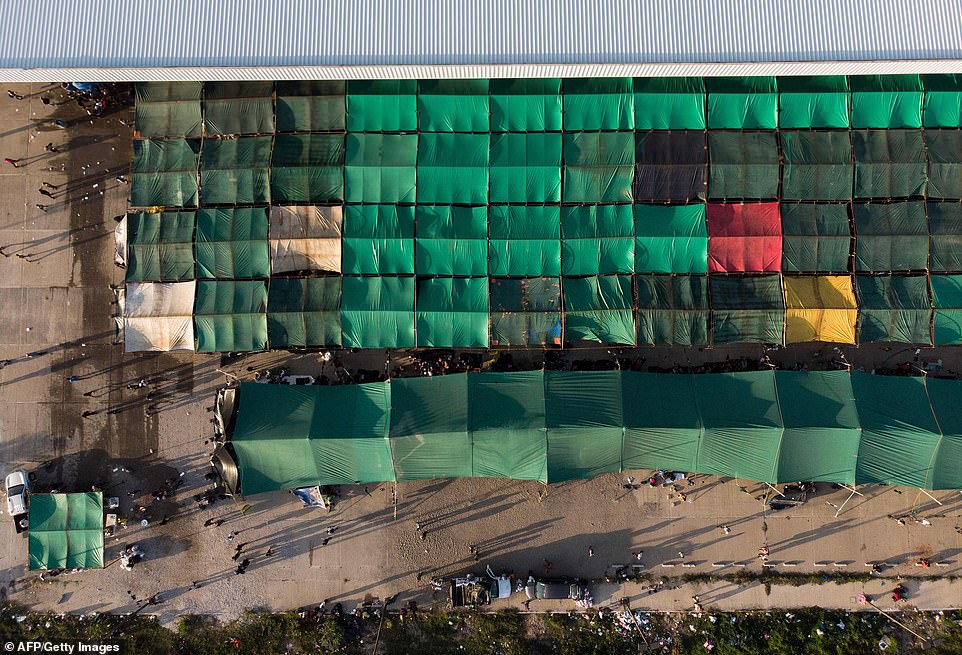 Aerial view of tents at an abandoned bus station used as temporary shelter for Honduran migrants taking part in a caravan heading to the US in Juchitan de Zaragoza, Oaxaca state, Mexico on October 30, 2018 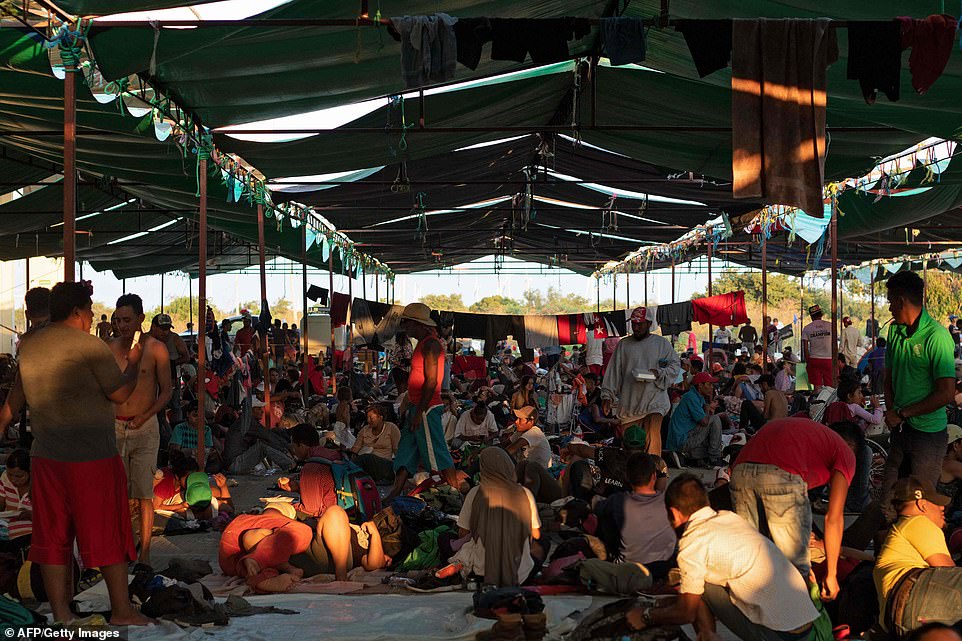 Day of rest: Migrants in the caravan planned to rest at least a day or longer in the southern city of Juchitan beginning Wednesday 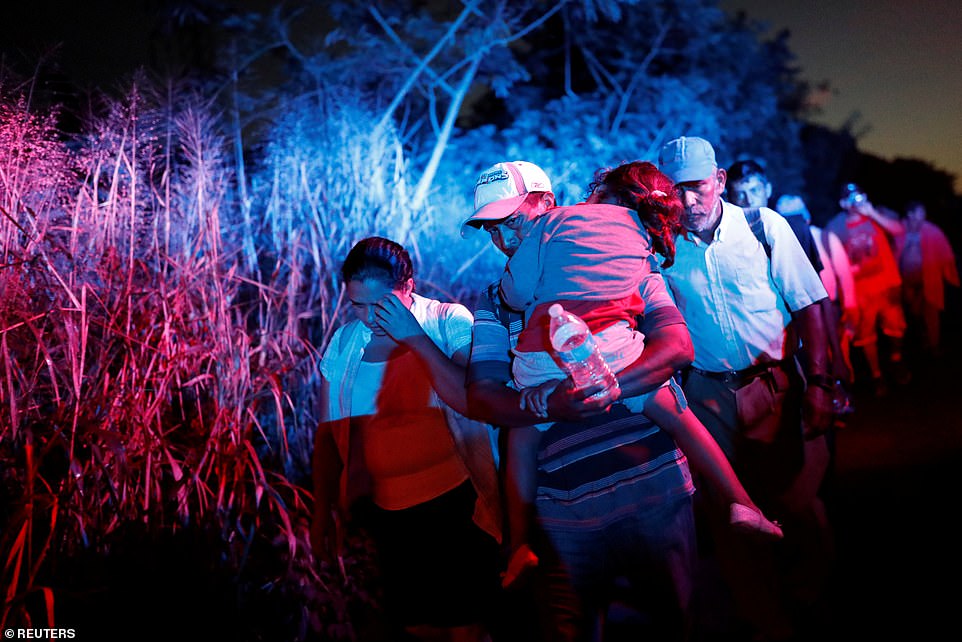 Migrants, part of a caravan traveling to the US, walk along the road to Huixtla, near Tapachula, Mexico 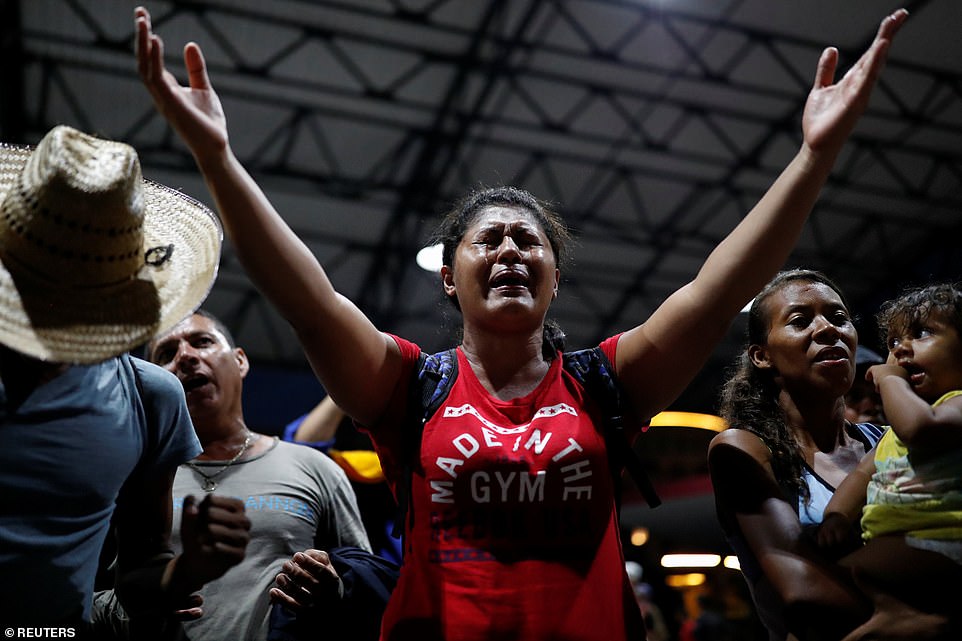 A second, smaller group, of 1,000 or so migrants who forced their way into Mexico on Monday was trailing some 250 miles back, stopping for the night in the city of Tapachula (pictured)

There was no indication from officials whether the request to transport the perhaps 4,000 people remaining in the group would be granted.

Meanwhile, the US Border Patrol this week warned Texas landowners along the southern border to get ready for the arrival of ‘armed civilians’ wishing to assist the National Guardsmen and Border Patrol agents in stopping the caravans from entering the US.

Three activists told The Associated Press that they were going to the border or organizing others, and groups on Facebook have posted dire warnings about the caravan. One said it was “imperative that we have boots on the ground.’ Another wrote: ‘WAR! SECURE THE BORDER NOW!’

The militia members said they plan to bring guns and equipment such as bulletproof vests and lend a hand to the Border Patrol to protect against people unlawfully entering the country.

‘They’re just laughing in our face,’ said Shannon McGauley, president of the Texas Minutemen. ‘It’s a free-for-all in America.’

McGauley said he already has members at three points of the state’s border with Mexico and expects to add 25 to 100 more people in the coming days, even though the first caravan is not expected to reach the nearest border crossing until December. 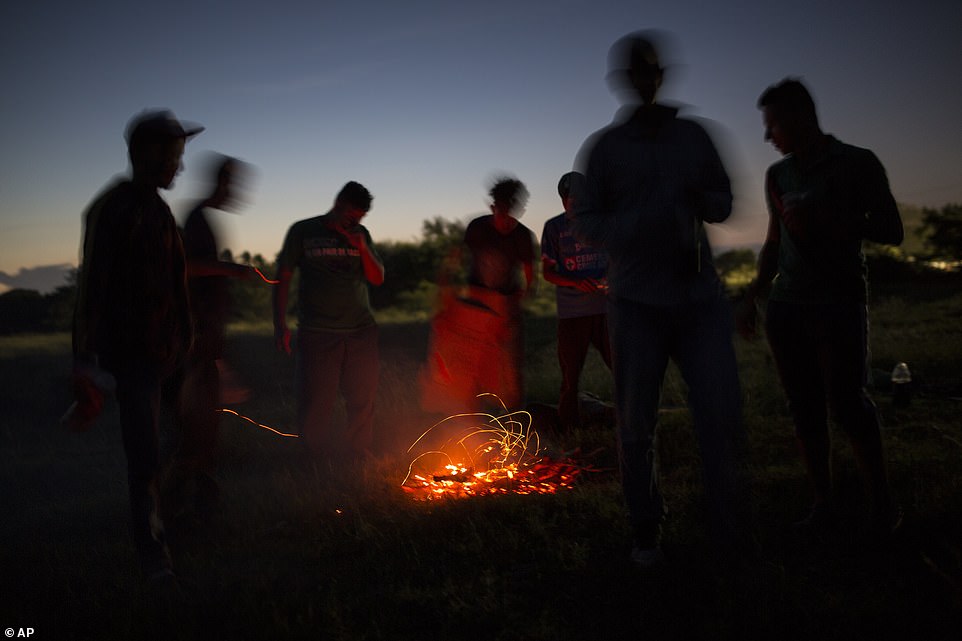 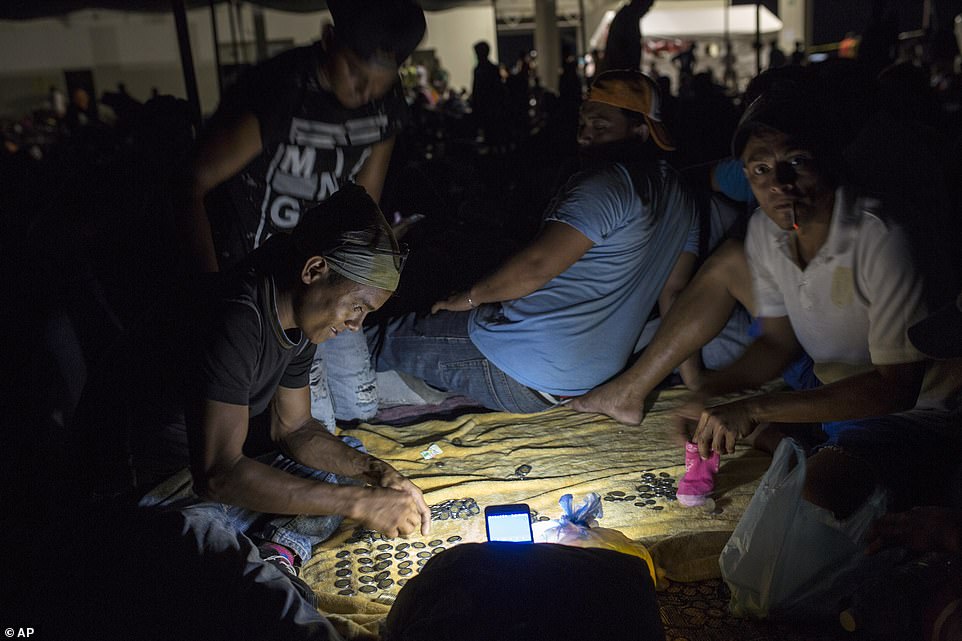 Honduran migrant Nelson Ruiz Madariaga counts coins collected while begging in the street, at a camp set up by a caravan of thousands of Central American migrants in Juchitan, Mexico 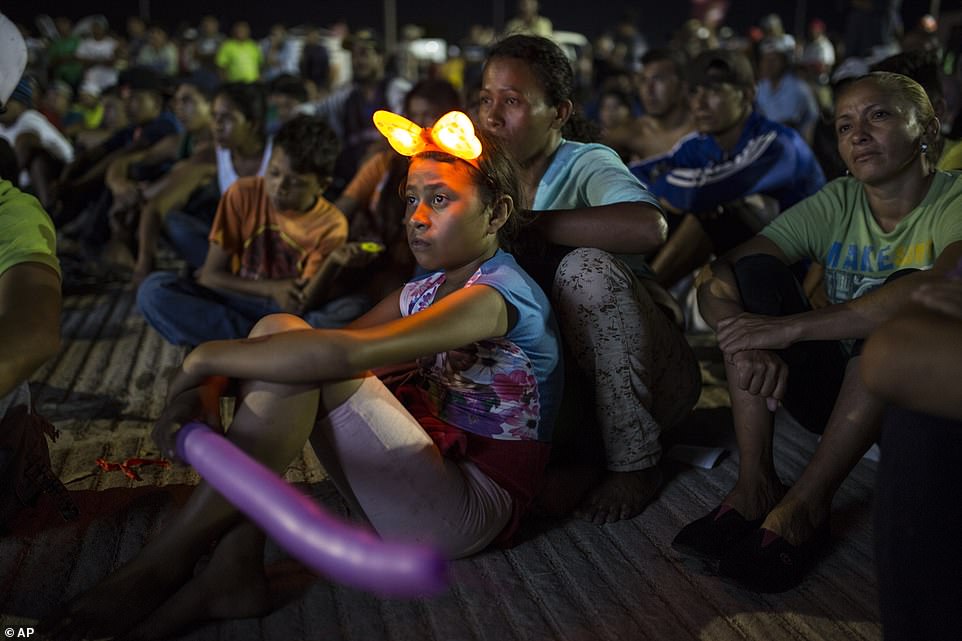 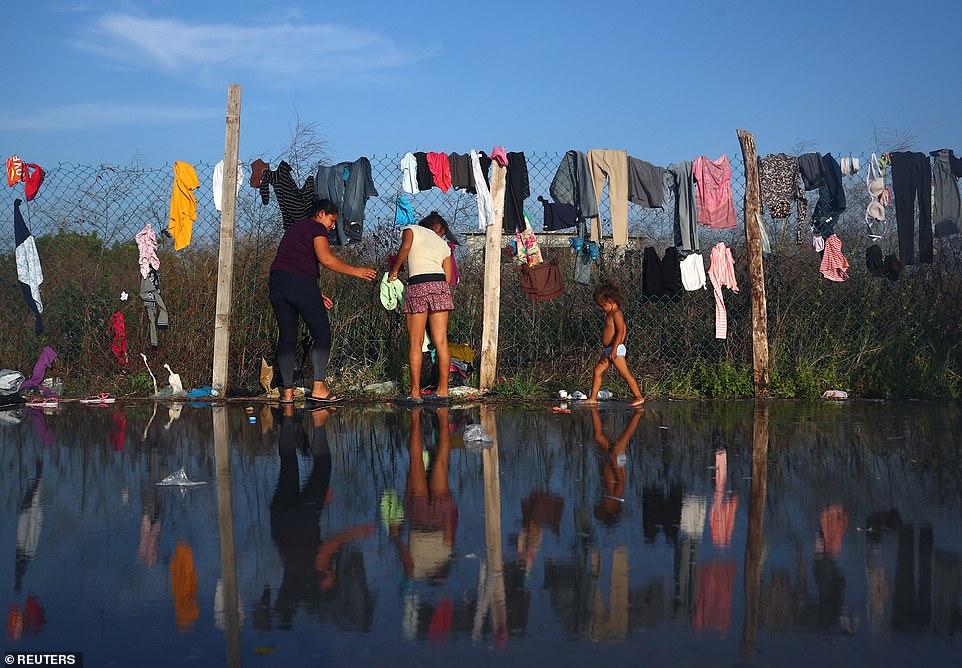 Migrants hang their wet clothes to dry as they rest in Juchitan, Mexico, October 30, 2018 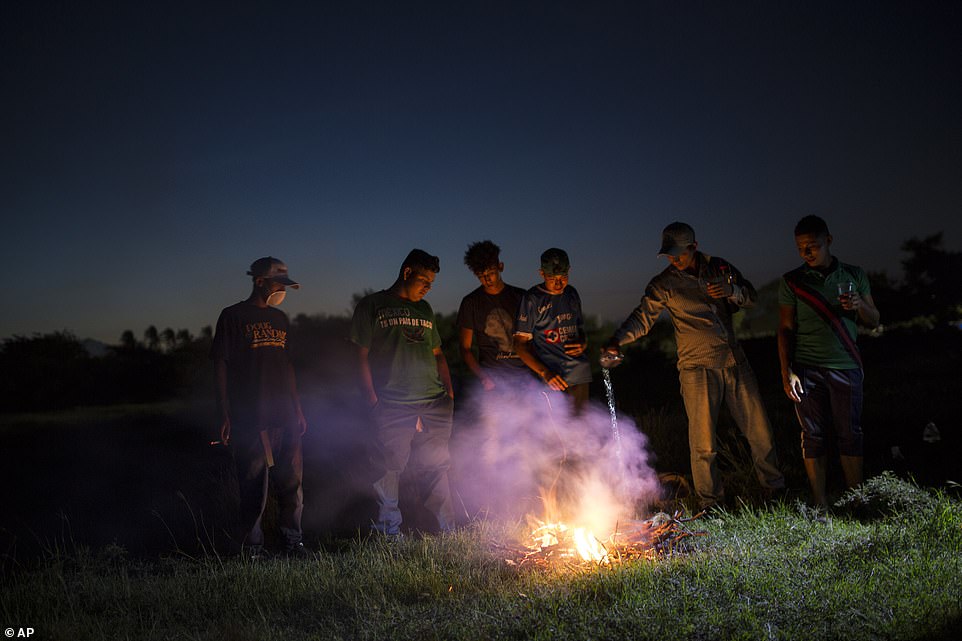 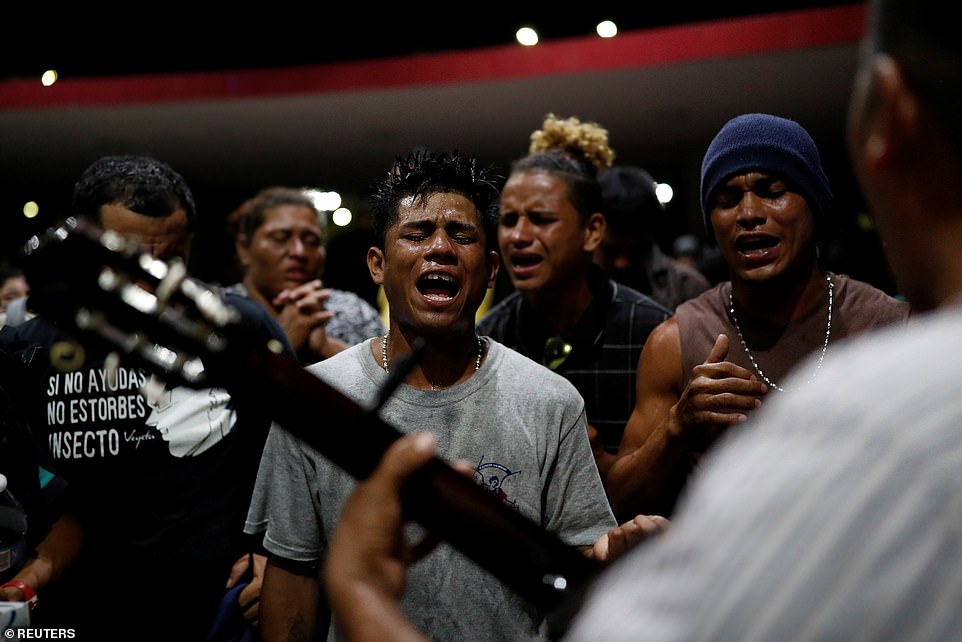 A with tears rolling down his cheeks sings and prays at a public square in Tapachula, Mexico, October 30, 2018 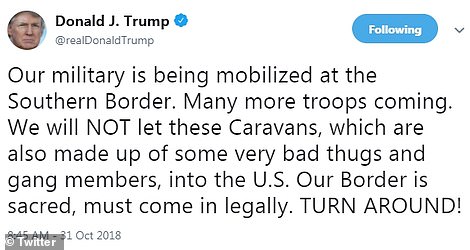 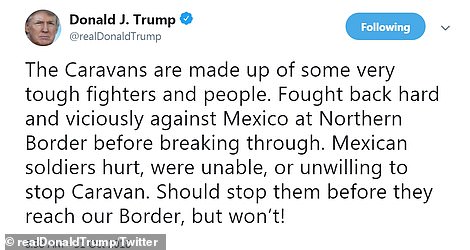 President Trump again tweeted about the caravans Wednesday, claiming they were made up of ‘bad thugs and gang members,’ and accusing Mexico of failing to halt their progress

Monica Marin, an Oregon resident, said she has raised about $4,000 online to help militias buy supplies.

She argued that members of the caravan are dangerous, echoing President Donald Trump’s baseless claim that ‘unknown Middle Easterners’ are mixed in with the crowd.

Marianna Trevino Wright, a South Texas resident who is director of the nonprofit National Butterfly Center, said she is more fearful of the militias than the caravan.

‘We go about our business here every day in a peaceful manner,’ Wright said. ‘The idea that we could be invaded not by illegal immigrants but by militia groups … is regrettable, and it will end badly.’

Starting out in Honduras more than two weeks ago, the caravan migrants have spent their nights camping out in the main squares of small cities in the southern states of Chiapas and now Oaxaca.

In Juchitan, they spent the night on a municipal-owned lot on the outskirts of town where a high ceiling sheltered a cement floor. Outside the structure many more bedded down on blankets or cardboard sheets in the grass, with some lashing tarps to the foliage for rudimentary shelter.

Full tanks of water were set up for people to be able to bathe, and a large video screen showed soccer programming and then cartoons for the kids.

The two caravans combined represent just a few days’ worth of the average flow of migrants to the United States. Similar caravans have occurred regularly over the years, passing largely unnoticed, but the new ones have become a hot-button political issue amid an unprecedented pushback from Trump.

With just a week to US midterm elections, the Pentagon has announced it will deploy 5,200 troops to the Southwest border, and Trump has continued to tweet and speak about the migrants.

On Wednesday, Trump again ratcheted up the rhetoric, tweeting without any evidence that the caravans are made up of ‘some very bad thugs and gang members’ trying to enter America’s ‘sacred’ border.

In a companion tweet, Trump cast blame on Mexican forces for being unable ‘or unwilling’ to stop the caravans’ progress towards the US border. 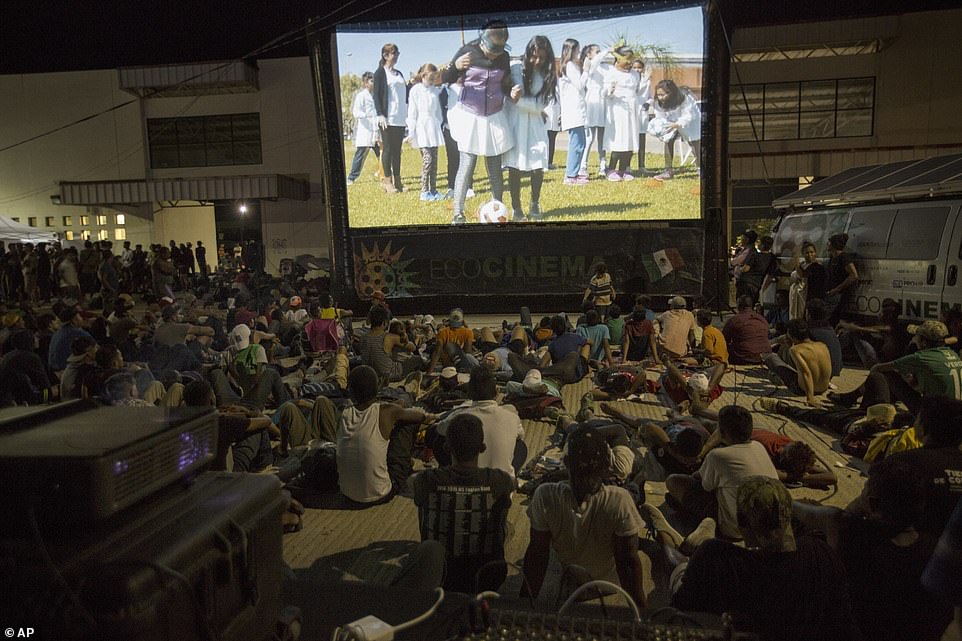 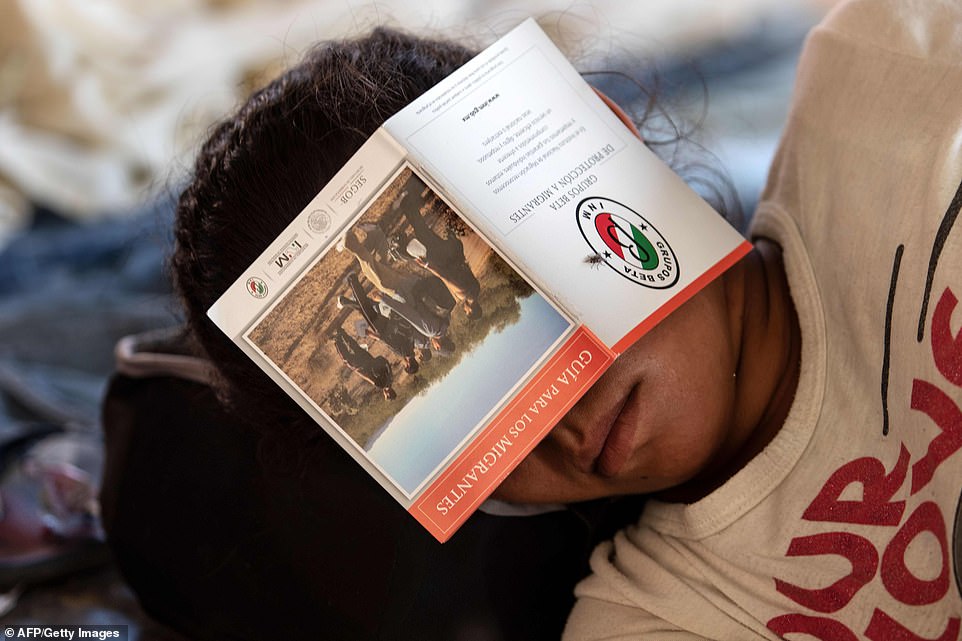 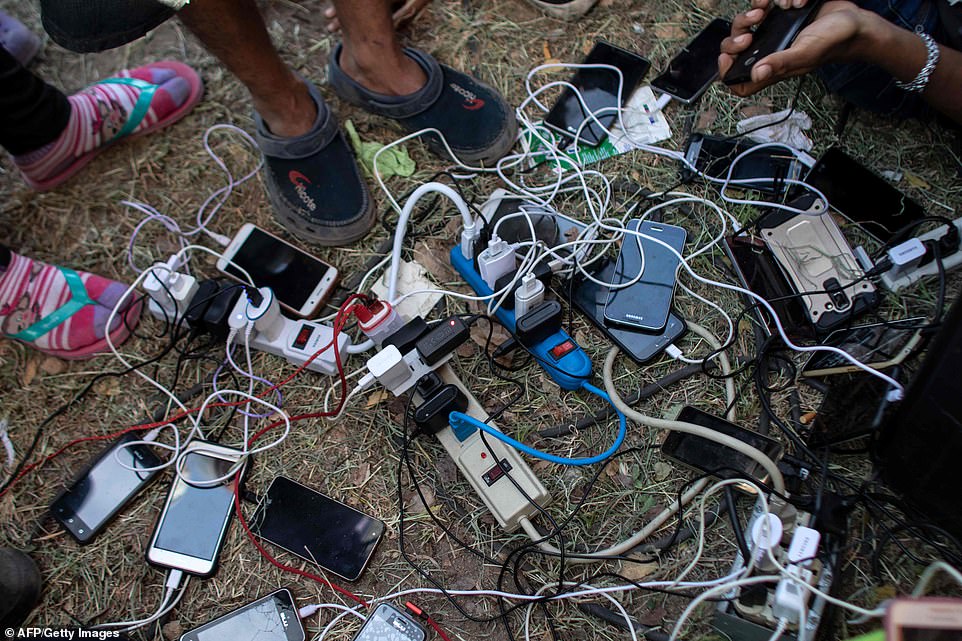 Earlier this week, the president said he wants to build tent cities to house asylum seekers and floated the prospect of ending the constitutional right to US citizenship for babies born in the country to noncitizens to crack down on the so-called ‘anchor babies.’

Experts widely dismissed the idea that the president could unilaterally change the rules on who is a citizen and said it’s highly questionable whether an act of Congress could do it, either.

Worn down from long miles of walking and frustrated by the slow progress, many migrants have been dropping out and returning home or applying for protected status in Mexico.

The initial group is already significantly diminished from its estimated peak at over 7,000-strong. A caravan in the spring ultimately fizzled to just about 200 people who reached the US border at San Diego.

Deputy foreign ministers from El Salvador, Guatemala, Honduras and Mexico met Tuesday and agreed to coordinate ‘special attention’ for the caravans, guaranteeing human rights, humanitarian assistance and ‘a safe, orderly and regular migration’ in accordance with each country’s laws.

Mexico’s Interior Department said two Hondurans who requested entry were identified as having arrest warrants back home, one drug-related and the other for suspected homicide. They were deported.

The department said in a statement that the men were part of ‘the migrant caravan,’ but did not say which group or specify when they were detained at checkpoints in the southern state of Chiapas.

Echoing their countrymen in the initial caravan, Hondurans in the second group talked of fleeing poverty and gang violence in one of the world’s deadliest countries by homicide rates.

They said asylum in the United States is their primary goal, but some expressed openness to applying for protected status in Mexico if that doesn’t work out.

‘Continue on to the United States, that is the first objective,’ said Carlos Enrique Carcamo, a 50-year-old boat mechanic. ‘But if that’s not possible, well, permission here in Mexico to work or stay here.’