A former Republican candidate for state Senate in Maine has joined the ranks of women calling out President George HW Bush for allegedly groping them, bringing the number of accusers to four.

Amanda Staples told the Portland Press Herald in Maine that she was groped by Bush in 2006 in Kennebunkport.

Earlier thus week, Bush’s spokesperson blamed the awkward positioning of his arm while posing for photos on his being wheelchair-bound, but in Staples’ picture from 2006, he is seen standing.

Bush 41 has been relying on a wheelchair or motorized scooter to get around since 2012, after he was diagnosed with a condition that has Parkinson’-like symptoms.

Staples, a former teacher, wrote in an Instagram post on Thursday that the 41st president of the United States inappropriately touched her during a photo-op at Walker’s Point while they were chatting about lowering taxes.

Caught on camera: Amanda Staples, a former Republican candidate for state Senate in Maine, is accusing former President George HW Bush of groping her in this 2006 photo 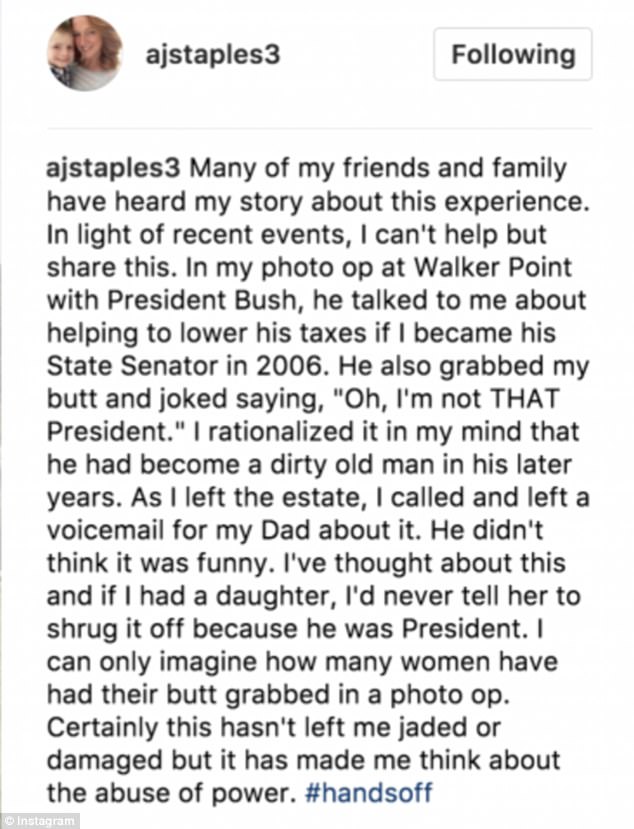 The aspiring politician said of Bush that he ‘grabbed my butt and joked saying, “Oh, I’m not THAT President.’

Afterwards, Staples, then aged 29, wrote she ‘rationalized’ that the married elder-statesman, who was in his 80s at the time, ‘had become a dirty old man in his later years.’

Staples, who has a grown son, went on to write that if she had a daughter, she would never let her ‘shrug it off because he was President. 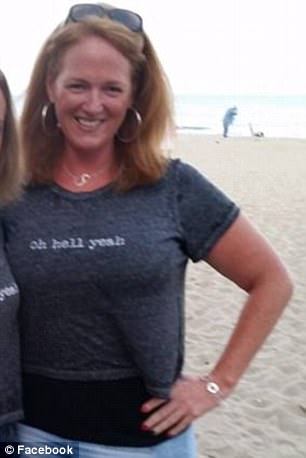 Staples, who has a son, on Friday became the fourth woman to accuse Bush 41 of being handsy with her

‘I can only imagine how many women have had their butt grabbed in a photo op.’

Eleven years later, Staples writes that while her encounter with George HW Bush has not left her ‘damaged,’ it has made her think about the ‘abuse of power.’

Besides Staples, two actresses and a bestselling author have so far spoken out about the former president’s alleged conduct with women.

Bush’s office says the 93-year-old has ‘patted women’s rears in what he intended to be a good-natured manner.’ The statement says he apologizes ‘to anyone he has offended.’

In an essay for Slate published on Thursday, novelist Christina Baker Kline claimed that the former president’s wandering hands were caught in an official photo from a Houston event for the Barbara Bush Foundation for Family Literacy in 2014, and that he even used the same ‘David Cop-a-Feel’ line on her that another accuser mentioned.

Kline says she and her husband approached Bush, now 93, for a photo after the private luncheon, to which she was invited as a guest author.

Kline writes that Bush told her he was beautiful and then, noting she is an author, said ‘You wanna know my favorite book?’

She writes: ‘By now the photographer was readying the shot. My husband stood on one side of the wheelchair, and I stood on the other. President Bush put his arm around me, low on my back. 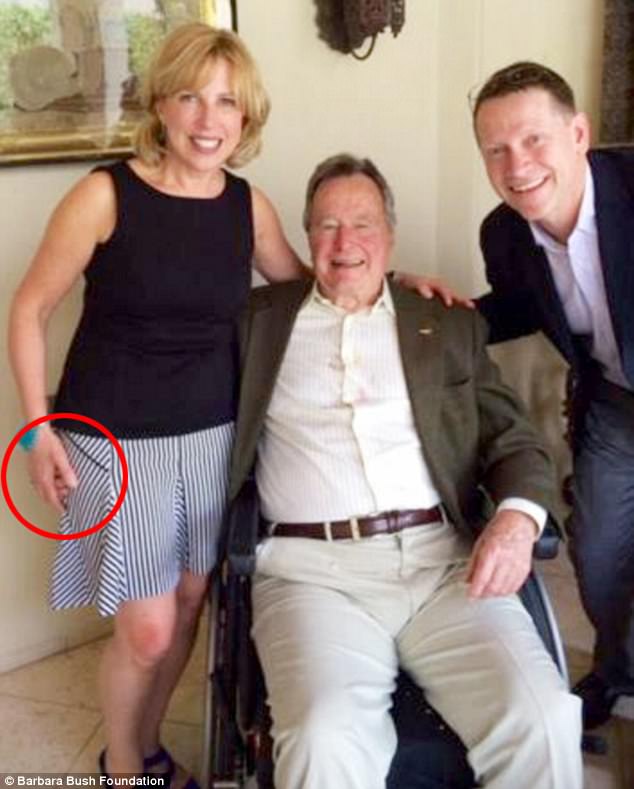 ‘His comic timing was impeccable. “David Cop-a-feel,” he said, and squeezed my butt, hard, just as the photographer snapped the photo.’

Kline says her husband, who was also in the photo on the other side of Bush, was completely unaware of what was happening at the time.

‘I wasn’t traumatized. I’m not angry. But it shouldn’t have happened,’ Kline wrote, adding that she hopes coming forward would ‘begin to effect change’.

She concluded by quoting the Charles Dickens novel Bush’s pun is taken from, David Copperfield: ‘It’s in vain to recall the past, unless it works some influence upon the present.’

Her story echos the account of actress Jordana Grolnick, who claims that in 2016 the former president told her that his favorite magician was ‘David Cop-a-Feel’ as he squeezed her rear during a group photo.

Bush’s spokesman has explained in a statement: ‘At age 93, President Bush has been confined to a wheelchair for roughly five years, so his arm falls on the lower waist of people with whom he takes pictures.

‘To try to put people at ease, the president routinely tells the same joke — and on occasion, he has patted women’s rears in what he intended to be a good-natured manner.

‘Some have seen it as innocent; others clearly view it as inappropriate. To anyone he has offended, President Bush apologizes most sincerely.’

The alleged incident with Grolnick happened during a 2016 photo op with the President while she was working on the Hunchback of Notre Dame production. 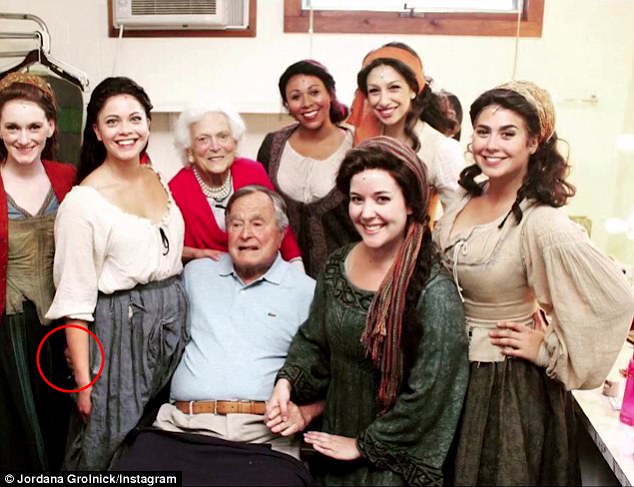 New York actress Jordana Grolnick (second left) was the second woman to come forward claiming former President George H.W. Bush touched her backside. She says he also made a ‘David Cop-a-Feel’ joke when the photo was taken in 2016 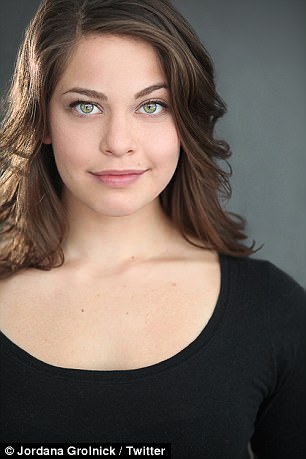 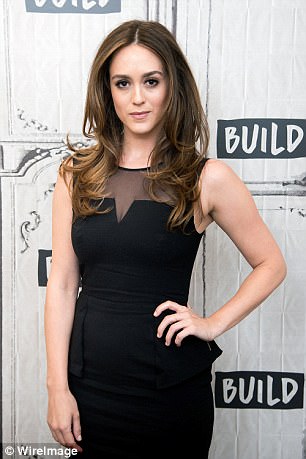 Grolnick (left) made the second of such claims against the former president. Heather Lind (right) claimed on Tuesday that Bush groped her in a similar manner during a 2014 photo shoot

‘We all circled around him and Barbara for a photo, and I was right next to him,’ Grolnick told Deadspin on Wednesday.

‘He reached his right hand around to my behind, and as we smiled for the photo he asked the group, ‘Do you want to know who my favorite magician is?”

‘As I felt his hand dig into my flesh, he said, ‘David Cop-a-Feel!”

She said that others in the room ‘laughed politely and out of discomfort,’ and that former first lady Barbara Bush ‘said something along the lines of, ‘He’s going to get himself put into jail!”

The actress posted a photo to her Instagram page showing her standing next to Bush, whose hand appears to be near her rear. 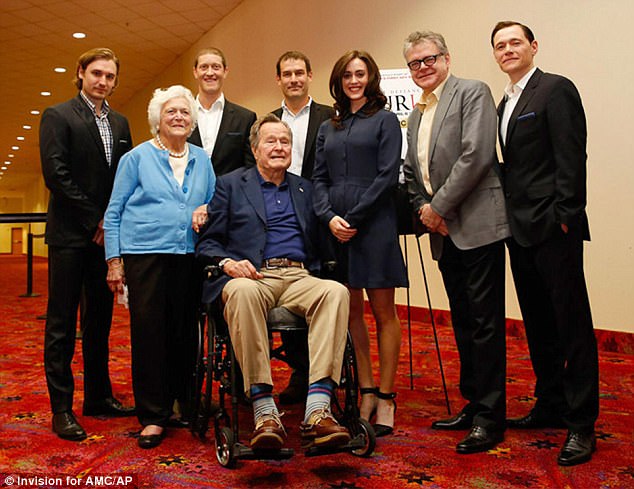 She wrote: ‘George H.W. Bush has a favorite magician. It’s ‘David Cop-A-Feel.’ He told us so. Barbara has no opinion on magicians. #history.’

Grolnick was the second woman to come forward after Heather Lind claimed on Tuesday that Bush groped her in a similar manner during a 2014 photo shoot.

Lind starred in AMC’s series ‘Turn: Washington’s Spies’, alleged on social media on Tuesday that the 93-year-old former president had grabbed her from behind during the photo shoot at a private screening of the series premiere in March 2014.

Her costar Kevin McNally, who was stood next to Lind in the photograph says he can confirm her claims.

‘My full support for @heatherglind for speaking out about the horrible event in Houston. All of which is true,’ tweeted the Pirates of the Caribbean star on Wednesday.

I was disturbed today by a photo I saw of President Barack Obama shaking hands with George H. W. Bush in a gathering of ex-presidents organizing aid to states and territories damaged by recent hurricanes. I found it disturbing because I recognize the respect ex-presidents are given for having served. And I feel pride and reverence toward many of the men in the photo. But when I got the chance to meet George H. W. Bush four years ago to promote a historical television show I was working on, he sexually assaulted me while I was posing for a similar photo. He didn’t shake my hand. He touched me from behind from his wheelchair with his wife Barbara Bush by his side. He told me a dirty joke. And then, all the while being photographed, touched me again. Barbara rolled her eyes as if to say ‘not again’. His security guard told me I shouldn’t have stood next to him for the photo. We were instructed to call him Mr. President. It seems to me a President’s power is in his or her capacity to enact positive change, actually help people, and serve as a symbol of our democracy. He relinquished that power when he used it against me and, judging from the comments of those around him, countless other women before me. What comforts me is that I too can use my power, which isn’t so different from a President really. I can enact positive change. I can actually help people. I can be a symbol of my democracy. I can refuse to call him President, and call out other abuses of power when I see them. I can vote for a President, in part, by the nature of his or her character, knowing that his or her political decisions must necessarily stem from that character. My fellow cast-mates and producers helped me that day and continue to support me. I am grateful for the bravery of other women who have spoken up and written about their experiences. And I thank President Barack Obama for the gesture of respect he made toward George H. W. Bush for the sake of our country, but I do not respect him. #metoo