‘Fox and Friends’ – a favorite news show of President Donald Trump – was revealed in government emails to have shared interview questions and a politically loaded introduction in advance of a segment featuring former EPA chief Scott Pruitt.

In one exchange, from May 2017, former EPA press secretary Amy Graham pitched an interview to talk about how Pruitt wanted to help communities ‘poorly served by the last administration.’

She exchanged messages with producer Andrew Murray, who in turn forwarded them to producer Diana Aloi.

At one point, Aloi ran an introductory script by Pruitt’s office, asking: ‘Would this be okay as the setup to his segment’? according to emails obtained by the Daily Beast.

DRAIN THE SWAMP: Pruitt, who promoted a deregulatory agenda, discussed Superfund sites during the segment

Her proposed language bashed the Obama administration and gave Pruitt a slow pitch to tout his own agenda.

‘There’s a new direction at the Environmental Protection Agency under President Trump—and it includes a back-to-basics approach,’ the proposed intro said. ‘This after the Obama administration left behind a huge mess more than 1,300 super-fund sites which are heavily contaminated—still require clean-ups. So why was President Obama touted as an environmental savior if all these problems still exist?’ 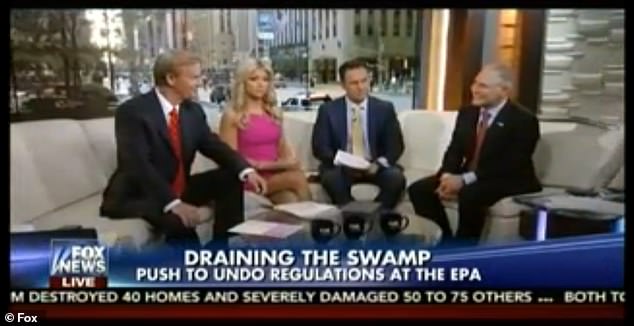 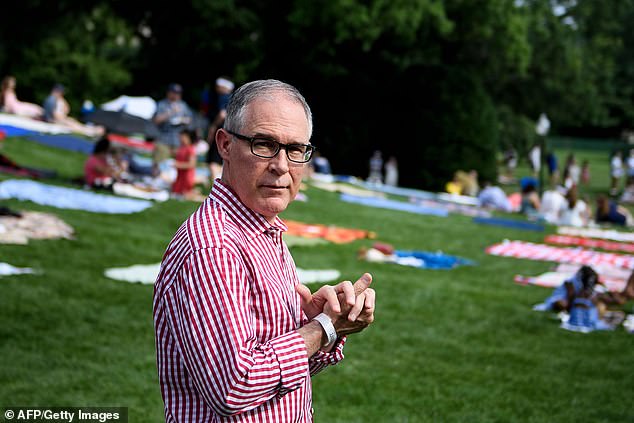 WALK IN THE PARK: The show’s producers let Pruitt’s office see in advance an introduction that bashed President Obama and said there was ‘new direction’ at EPA 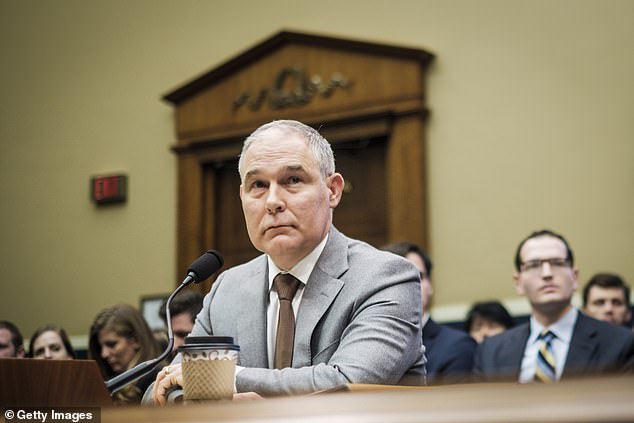 Pruitt left the administration while facing a slew of investigations

During the segment that aired, the Fox hosts stuck to what was agreed to in advance.

‘President Trump trying his best to drain the swamp and much of that draining happened at the Environmental Protection Agency after the Obama administration left behind—get this—a huge toxic mess,’ said cohost Brian Kilmeade on air. ‘More than 1,300 superfund sites that are heavily contaminated still require clean up,’ chimed in co-host Ainsley Earhardt.

Co-host Steve Doocey added: ‘The press made president Obama out to be the environmental savior’ – a term that was also part of Pruitt’s talking points later in the interview. 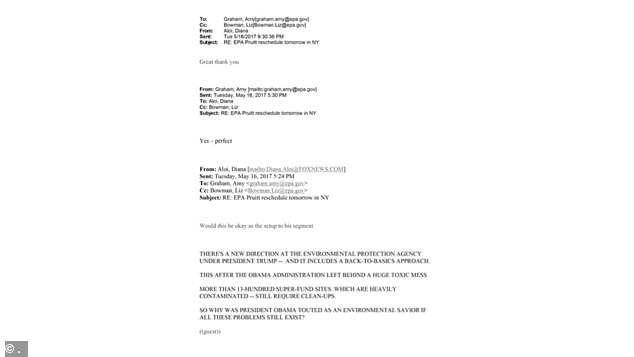 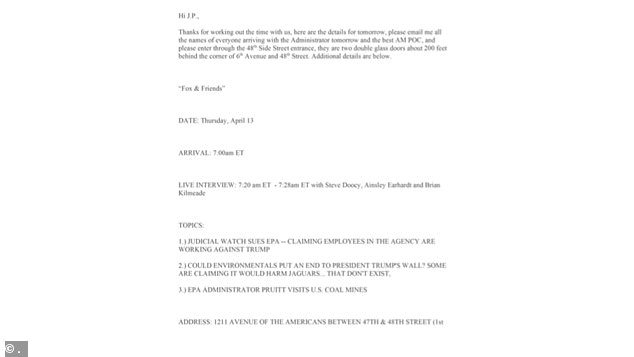 Pruitt got to make his case with virtually no pushback. ‘This president is a doer, he’s an action-oriented leader,’ said Pruitt. ‘The past administration talked a lot. This administration’s actually taken steps to do things to clean up the environment … They want leadership and this president’s providing leadership in so many areas,’ added Pruitt, who was forced out while facing more than a dozen investigations, including an unusual living arrangement that had him paying $50 per diem to stay in a room at the home of an energy lobbyist.

‘This is not standard practice whatsoever and the matter is being addressed internally with those involved,’ a Fox News channel spokeswoman told DailyMail.com when asked for comment.

EPA press secretary Lincoln Ferguson wrote in April 2018 pitching a sit-down. and said Pruitt had ‘really been wanting to make this happen.’

Pruitt’s team even offered to fly with Hannity aboard a private jet to Pruitt’s home state of Oklahoma to meet with a rural family and talk about the Obama administration’s water policy.

Hannity didn’t bite. ‘Unfortunately it doesn’t look like we can make it work this week with Sean’s schedule,” a producer responded. ‘Please keep us posted for other opportunities!”