Fox News anchor Neil Cavuto has issued a warning to viewers to exercise caution when it comes to using the drug hydroxychloroquine.

It came after President Trump, earlier on Monday, revealed that he had been taking the drug for over a week.

Cavuto, 61, who is immunocompromised himself and suffers from MS, urged people to be extremely careful adding that it could could kill those who have certain underlying health conditions.

Fox News host Neil Cavuto, 61, was said be ‘stunned’ by President Trump’s revelation he has been taking hydroxychloroquine as preventive treatment for coronavirus

The warning from the Fox News presenter, a network that has long been supportive of the president and his administration, came after Mr Trump concluded his remarks.

‘That was stunning,’ Cavuto said. ‘The fact of the matter is though, when the president said ‘what have you got to lose?’, in a number of studies, those certain vulnerable population has one thing to lose: their lives,’ Cavuto explained.

‘If you are in a risky population here, and you are taking this as a preventative treatment to ward off the virus, or in a worse-case scenario you are dealing with the virus and you are in this vulnerable population, it will kill you.’ he said.

‘I cannot stress enough. This will kill you. So, again, whatever benefits the president says this has, and certainly it has had for those suffering from malaria, dealing with lupus, this is a leap that should not be taken casually by those watching from home or assuming, well the president of the United States says it’s OK,’ he said. 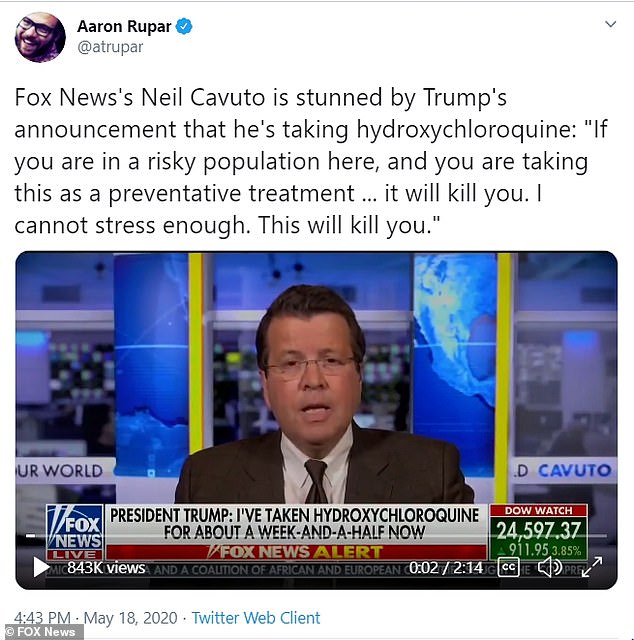 Aaron Rupar, an editor at Vox was shocked at Neil Cavuto’s rebuke of the presidential advice

‘Even the FDA was very cautious about this unless in a clinical trial safely and deliberately watched. I only make this not to make a political point here, but a life-and-death point. Be very, very careful,’ Cavuto urged.

‘A VA study showed that among a population in a hospital receiving this treatment, those with vulnerable conditions — respiratory conditions, heart ailments — they died,’ Cavuto noted.

He also mentioned that other studies that found the drug to be ineffective at treating coronavirus.

The remarks also drew surprise on Twitter with DailyMail.com’s Piers Morgan writing: ‘Wow.. even Fox News anchors are warning their viewers to ignore what Trump’s just said or it may kill them.’ 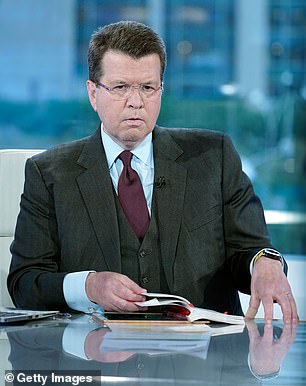 Aaron Rupar, an editor at Vox was similarly shocked at Cavuto’s rebuke of the president’s advice.

‘Fox News’s Neil Cavuto is stunned by Trump’s announcement that he’s taking hydroxychloroquine: ‘If you are in a risky population here, and you are taking this as a preventative treatment … it will kill you. I cannot stress enough. This will kill you.’

Cavuto made his impassioned remarks from a unique perspective as someone who has a number of health problems of their own.

Cavuto, a husband and father-of-three has multiple sclerosis and was diagnosed twenty-three years ago, at the age of 38.

Months after being diagnosed he underwent treatment for stage 4 cancer in the form of Hodgkin’s Lymphoma which he managed to beat.

In 2016 he underwent a triple heart bypass operation, but the Fox anchor appears to be doing well.

The president made his shocking announcement that he was taking hydroxychloroquine at the White House during an event with restaurant workers on Monday.

‘I’m taking it – hydroxychloroquine. Right now yeah. A couple of weeks ago, started taking it,’ he said.

‘I would’ve told you that three to four days ago, but we never had a chance because you never asked me the question,’ Trump continued.

The Food and Drug Administration warned in April that hydroxychloroquine can significantly increase the risk of death in people, especially those with heart problems, and cautioned against its use.

The president repeatedly has touted hydroxychloroquine – used to treat malaria, lupus and other diseases – and the antibiotic azithromycin, often referred to as ‘Z-pack,’ to be used to treat the coronavirus.

Trump, 73, said he took one dose of the z-pack antibiotic and is now taking a zinc supplement along with a daily hydroxychloroquine pill. He noted he’s had no side effects.

The president shrugged off warnings about the side effects of hydroxy issued by the FDA and the National Institutes of Health. Both medical organizations note the drug is only approved for the use of patients in hospitals who have been diagnosed with the coronavirus.

‘I’ve heard a lot of good stories. And if it is not good, I will tell you right. I’m not going to get hurt by it. It has been around for 40 years for malaria, for lupus, for other things. I take it,’ Trump said. 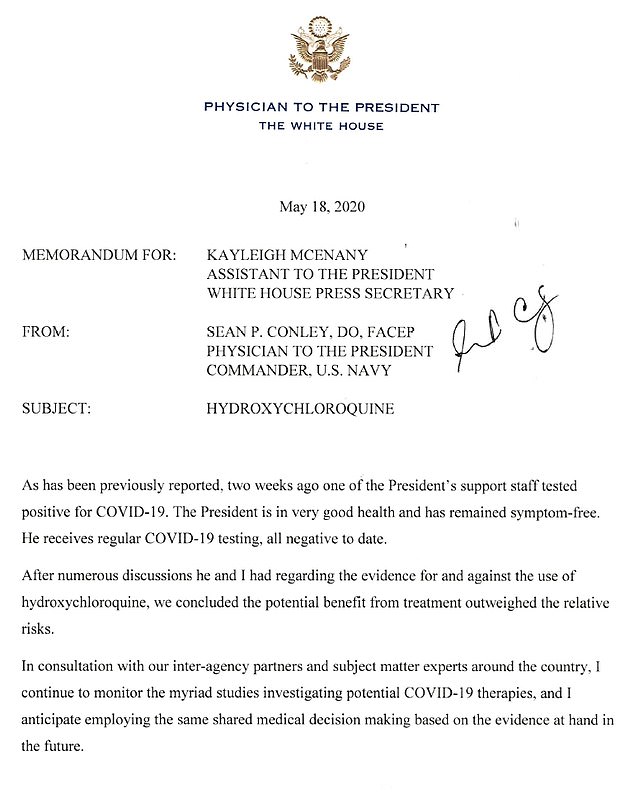 Dr. Sean Conley, the White House physician, released a memo Monday night, saying he and Trump discussed the matter and believed the gain from using hydroxychloroquine outweighed its risk factors

A study released last Monday showed hydroxychloroquine does not work against the coronavirus and could cause heart problems.

Additionally, the FDA and the National Institutes of Health issued warnings about using the drugs for coronavirus patients. 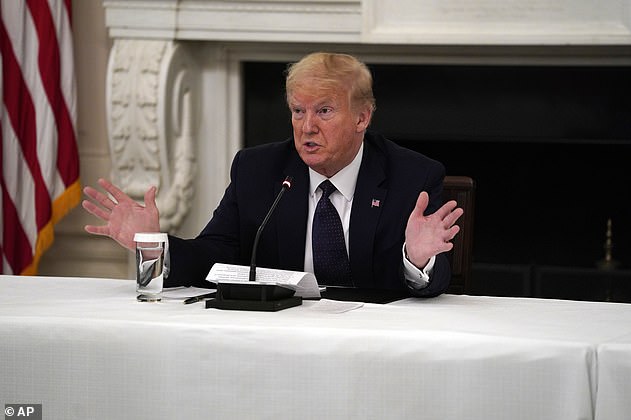 ‘Although there is anecdotal evidence that hydroxychloroquine and azithromycin may benefit people with COVID-19, we need solid data from a large randomized, controlled clinical trial to determine whether this experimental treatment is safe and can improve clinical outcomes,’ Dr. Anthony Fauci, the nation’s top infectious disease expert and head of the NIH, said last week.

Trump dismissed such studies and complained they were done by the Veterans Administration, where he does not have a lot of supporters.