Pundits across the broadcast and cable networks got their first chance to weigh on the testimony of Christine Blasey Ford on Thursday afternoon when the Senate Judiciary Committee hearing broke for lunch.

There was little to say however in the end, with almost every single pundit saying the same thing, including the pro-Kavanaugh team at Fox News.

All six anchors on the cable news network were in agreement that Dr Ford was an honest and unshakeable witness who did not seem to be motivated by any sort of Democratic plot to bring down the nominee.

‘This was extremely emotional, extremely raw and extremely credible,’ said Chris Wallace at one point.

He then added: ‘This is a disaster for Republicans.’

Those comments were also a disaster for former co-worker Megyn Kelly, who was on NBC at the same moment declaring: ‘If history is any indicator, [most people] will look at the clips and they will look at their favorite channels tonight for affirmation of their world view.’

Winning them over: Fox News had nothing but praise for the testimony of Dr Christine Blasey Ford on Thursday, with all six pundits giving her positive marks (l to r: Brit Hume, Maria Harf, Shannon Bream, Chris Wallace, Martha MacCallum and Bret Baier)

‘So far today, we have heard a very credible seemingly nonpartisan witness speaking to something she clearly believes happened,’ said Marie Harf.

‘What will be key now is how Brett Kavanaugh reacts. Not just what he says, but the tone with which he says it.’

Brit Hume was the most critical, but even he acknowledged that there were only some minor holes in Dr Ford’s story.

‘I would say this about her credibility – the more hesitant, the more fragile she has seemed, the more powerful and credible I think she comes across to the audience,’ stated Hume.

‘This poses an intriguing challenge for Judge Kavanaugh. How does he respond to this? The problem is he’s being asked to prove a negative, or establish a negative.’

He continued: ‘The fact that her testimony remains basically utterly uncorroborated doesn’t really help him that much today. He has to come in and somehow be at least as convincing as she is, and maybe even more so. It’s a very tall order. Whether she’s telling the truth or not.’

‘And they really haven’t shaken that story at all.’

CNN had nothing but praise for Dr Ford as well, and seemed to be the most shocked by the commentary happening over on Fox News.

‘You mentioned Chris Wallace. The president checks in on us from time to time. He is hearing the same conversation we are having here from Chris Wallace who said it has been a disaster for Brett Kavanaugh,’ said John King, one of the nine members on their panel.

‘Another respected voice had the same opinion.’

Wolf Blitzer kicked things off like every other pundit by noting how ‘credible’ the witness was, and Dana Bash suggested that the testimony was having a big impact.

‘I am getting texts from Republican strategists saying they are watching the key independent voters, women in particular, but men, too, slipping away the more and more,’ claimed Bash. 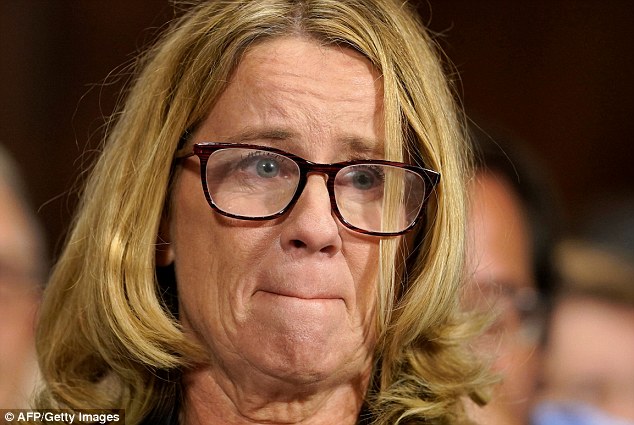 Emotional testimony: ‘So far today, we have heard a very credible seemingly nonpartisan witness speaking to something she clearly believes happened,’ said Marie Harf of Dr Ford (above) 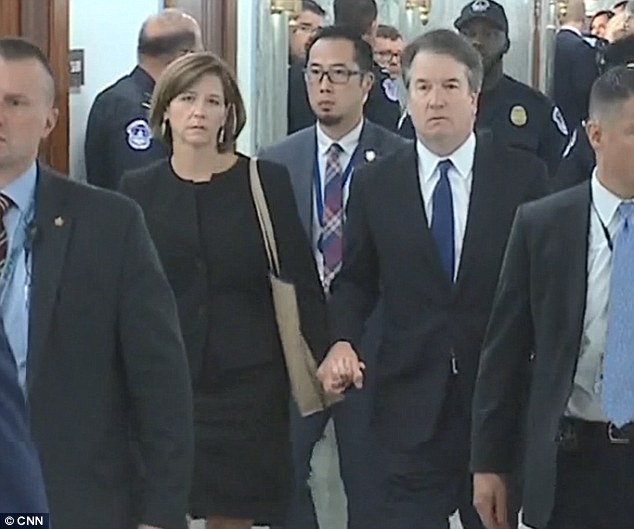 Fury: Kavanaugh and his wife Ashley are seen heading in before he began his testimony on Thursday (above)

And it was a former Fox News host who was  ultimately the least impressed with the testimony she heard on Thursday – Megyn Kelly.

‘I mean the proceeding, to assess the position of Brett Kavanaugh right now is premature, because we have heard half the story, right?’ said Kelly.

‘We are only partially through this sort of mini trial, for lack of a better term, although this actually looks nothing like an actual trial. So you generally believe the first witness who testifies, and the person cross-examining her isn’t really laying a lot of gloves on her, so it is natural for all of us all to be saying we believe her, she is a very strong witness, and Kavanaugh is in a lot of trouble.

Her praise was also followed by caveats that managed to slightly undermine anything positive she had just said about Dr. Ford.

‘You listen to Christine Ford and, for me, the moment that will stay with me was when she described having a memory of being in that room and looking over at Mark Judge and having eye contact with him and asking herself, will he save me? And he didn’t,’ said Kelly at one point.

‘I mean, it was just, I mean that, it was emotional…if she is an actress, she’s really good. really good.’

She also dismissed the idea that people would be swayed, seemingly unaware about what was happening at her old place of employment at the exact same moment.

‘I think most people are going about their daily business and have already decided if this is a political hit job on Brett Kavanaugh that is totally unfair or if this woman is a heroine for the MeToo age, who somehow found the courage to come forward and speak this truth in a way that will change the balance of the Supreme Court potentially forever,’ said Kelly.

She later noted: ‘We do need to be respectful. We are in a sea change in this country where women are finding their voices and coming forward in ways we have never seen them do before…We have to find a way of being respectful of the new paradigm we are in while also maintaining due process and a commitment to an adversarial process which we as America have decided is the best way forward to finding truth.’