An estimated 17.6million Americans live within one mile of an active oil or gas well, a study has revealed.

That means more than five percent of the US population is exposed to harmful toxins on a daily basis.

Experts say the report should be a red flag to public health officials that protective regulations and policies need to be improved to help prevent exposure.

The wells contaminate the quality of the air, water and soil and increase harmful toxins such as benzene and formaldehyde.

People living within a mile of these toxic fumes have an increased risk for getting cancer, heart disease, dementia or a neurological problem.

Birth defects such as pre-term birth, low weight and congenital heart defects have also increased around the areas with active oil and gas production.

This map shows where all the active wells are located in the United States. Roughly 50 percent of West Virgina’s population lives near an active gas or oil well

Researchers from at PSE Health Energy, the University of California, Berkeley, and Harvey Mudd College looked at the nationwide measurement for the number of people living near active oil and gas wells.

‘Our study was specifically designed to determine how many Americans have increased health risks from potential exposure to pollutants emitted from oil and gas development,’ said Eliza Czolowski, a research associate at PSE and lead author on the study.

When people live within a mile of these operations, they have a higher risk of being hospitalized for numerous medical issues, including heart and neurological problems, cancers and asthma.

So pregnant women living near these wells could be putting their fetuses at an increased risk to have one of these defects. 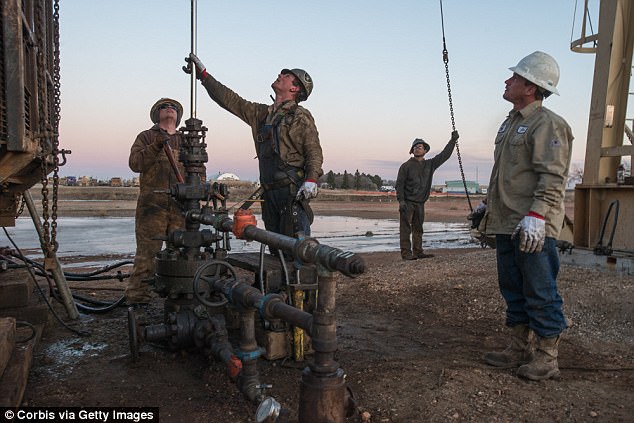 In the US, 17.6million people live a mile or closer to oil and gas wells. This is a picture of oil workers in Tioga, North Dakota. The state comprises of mostly oil wells

In addition to calculating a national population total, researchers produced a state-by-state comparison to see which ones had a high amount of people living near these wells.

West Virginia topped the list with roughly 50 percent of residents living near an active oil or gas well.

Oklahoma was close behind with 47 percent of residents near one.

A study by Yale University revealed that people were more likely to have lung and skin conditions if they lived near active wells.

The researchers studied 492 people in Pennsylvania who lived near a gas well.

They looked at the amount of times people self-reported skin and lung issues and compared that to proximity.

The researchers found the prevalence to skin and lung symptoms increased the closer the person lived to a fracking site.

One issue that could be occurring is how the wells are built.

Experts said the building of the wells in the US are not regulated to prevent exposure to harmful toxins.

‘When one in two members of a population are potentially exposed to a health risk, that’s a significant public-health concern,’ Czolowski said.

Other notable figures included 24 percent of Ohioans living near active wells and Texas having the highest number of residents near these harmful sites at 4.5million people.

Researchers also looked specifically at children aged 5 or younger because of how vulnerable they are to environmental exposures.

They found that 1.4million are living near and active well site in the US.

This means that Texas contributes to one fourth of the US population living a mile or less away from these harmful sites.

Both conventional and unconventional wells were included in the study as long as they were currently active.

Unconventional wells are hydraulic fracturing (fracking) wells, which is a use sand, water and chemicals to release oil or gas from rock formations.

Conventional wells use natural pressure to pump the gas and oil out of the ground.

‘Despite the differences in conventional and unconventional oil production techniques, the health risks can be very similar,’ Czolowski said.

Many air pollutants, including benzene, formaldehyde and particulate matter, are emitted from both conventional and unconventional operations.

Acute exposure to these air pollutants can cause irritation in the eyes, nose, throat and lungs while causing chronic conditions for people around them long term.

The study states that protective regulations and policies are necessary considering the large number of people exposed to these chemicals daily.

These policies should include a regulated distance between operations and places where people live, play and learn.

There should also be deployment of the best available air pollution-reduction technologies to help eliminate the toxic fumes.