France and Norway have threatened to close their borders with Spain over the soaring number of coronavirus cases.

The Spanish tourism industry, which accounts for around 12 per cent of the nation’s economy, faces collapse as countries attempt to combat a second wave of Covid-19.

It comes as the number of coronavirus cases in Spain soared with an additional 2,615 new infections recorded by Madrid just yesterday.

People sitting on beach towels on Cala de Alfacar, Menorca, earlier this week amid fears of a second wave of coronavirus cases in Spain 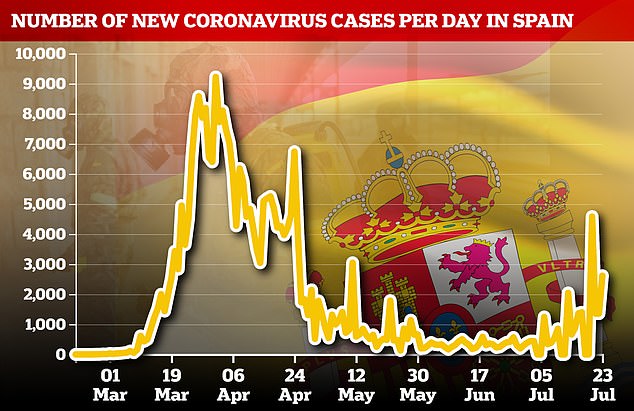 It comes as the number of coronavirus cases in Spain soared with an additional 2,615 new infections recorded by Madrid just yesterday

France has said it would not rule out closing its border with the Catalan region of Spain as it experiences a ‘significant rise’ in infections, according to the French public health authority.

Catalonia, which borders France, has been at the heart of a rebound in coronavirus cases since Spain lifted a nationwide lockdown one month ago.

Nearly 7,000 cases have been logged there in the past 14 days, accounting for almost half the nationwide total, though the rate has dropped in the past days.

Norway has similarly warned that it may add Spain to its list of high-risk countries which would mean that all arrivals would be forced into a ten-day quarantine. 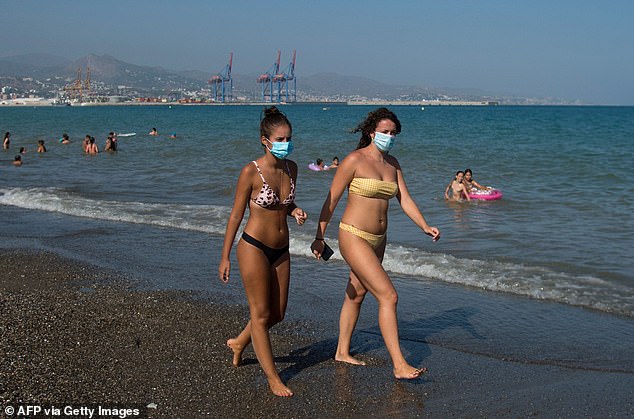 People wearing face masks walk along La Misericordia Beach, Malaga, earlier this week as Spain faces a fresh blow to its tourism industry due to coronavirus

This would prove to be another blow to the Spanish economy after two thirds of tourists cancelled their hotel bookings this month.

Cancellation rates are as high as 77 per cent among families and 70 per cent in the Balearic Islands which include Mallorca.

At some hotels, the number of tourists cancelling holidays that they booked several weeks or months ago is higher than the number of new bookings.

Elizabeth Keegan, director of tourism in Lloret de Mar, said: ‘We are getting cancellations from Britain, France and Belgium.

Spain has recorded more than 9,000 new cases in the last seven days after seeing only 5,000 in the previous week.

Earlier this week one town in Murcia re-imposed tough restrictions including a ban on entering or leaving the area after a spike in cases linked to a nightlife venue.

The government of the Balearic Islands insists that the archipelago is ‘safe for residents and visitors’, but some tourists have become alarmed by the growth in cases. 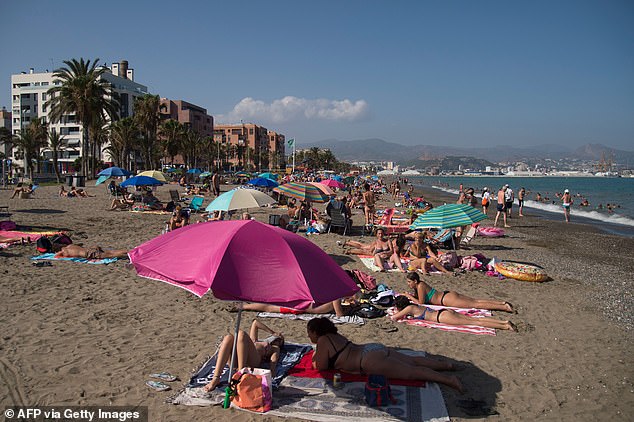 People sunbathing at the La Misericordia Beach, Malaga, this week amid fears that the Spanish tourism industry will collapse

According to research by tourism group Dingus, visitors who booked their trips between two and four months ago have cancelled more than 80 per cent of their holidays.

The UK government has not made any changes in its rules regarding Spain, after scrapping the 14-day quarantine rule for people returning from Spain to England after July 10.

But it comes after British tourists were warned that a new travel system means air bridges could collapse at short notice leaving them facing a quarantine on return to the UK.

The Foreign and Commonwealth Office earlier this month set out exemptions for a number of countries from its ‘all but essential’ travel guidance.

It means that currently holidaymakers can travel to 74 locations without having to quarantine for 14 days upon their return to the UK.

However Britain currently reviews all the countries on the ‘safe list’ every three weeks. But the government is expected to unveil a new rolling review list that means places could be on a ‘red list’ at very short notice, as reported by The Telegraph. 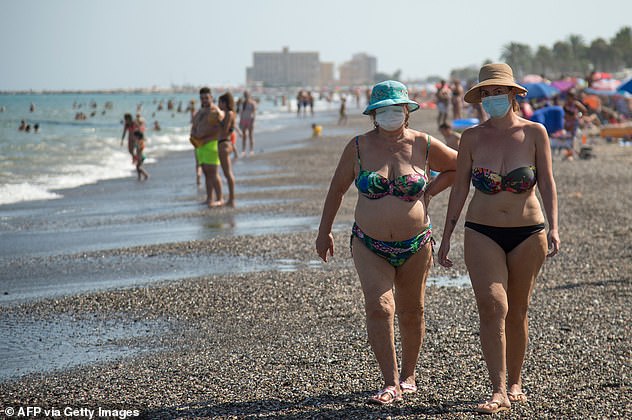 This means you could go abroad to a country on the ‘safe’ list for your holiday, but while away a spike in coronavirus cases could mean the government could place it on the ‘red’ list, meaning you would have to quarantine for 14-days upon your return.

It comes amid discussion that ‘regional’ air bridges could be set up to allow people to travel to specific areas of countries where there are lower rates of coronavirus infections.

The ‘regional’ air bridges plan could see low risk areas identified in high risk countries which travellers would be able visit without then being subject to 14-day quarantine rules upon their return.

Such a move would mean the end of outright travel bans on entire countries and represent a further easing of quarantine rules.

It is thought the air bridge plan is being looked at as part of a review of current travel restrictions, with changes due to be announced by Transport Secretary Grant Shapps on Monday.

The introduction of ‘regional’ air bridges could open up travel to tourist hotspots like The Algarve and Madeira in Portugal while keeping a ban on going to areas like Lisbon where coronavirus is more prevalent.

It could also allow for the return of some travel to the US amid fears the national scale of its outbreak could result in a long term ban.

A source told The Telegraph: ‘Regional air bridges are an option for countries with localised outbreaks.

‘The US is a major issue. If you judge it nationally, the absence of travel could go on for months, which is where individual testing of arrivals could work.’

Gloria Guevara, president of the World Travel and Tourism Council, told The Times: ‘The establishment of air corridors between financial centres where infection levels are low, such as between London and New York, would provide a vital boost to business travel and aid the economic recovery.’

Meanwhile, ministers are also believed to be looking at introducing coronavirus tests before or on arrival at UK airports in a further measure which could reopen travel to the US.

Mr Shapps will set out on Monday any changes to the current travel rules and announce whether any countries will be added to the 74 which are already exempt from the 14-day quarantine requirement.