Britons should not be banned from holidaying in France this summer because it is ‘too late’ to prevent the Coronavirus Delta Variant from entering the country, one of President Emmanuel Macron’s top scientific advisers said on Wednesday.

Professor Jean-François Delfraissy, head of the French government’s Covid-19 Scientific Council, spoke out against plans to put UK nationals on a new travel Red List, so keeping them out.

Professor Jean-François Delfraissy (pictured in March, file photo) head of the French government’s Covid-19 Scientific Council, spoke out against plans to put UK nationals on a new travel Red List and thus preventing them from traveling to the country

He was referring to the Delta Variant – the new name for a worryingly infectious strain of Coronavirus emanating from the sub-continent.

EU leaders including German Chancellor Angela Merkel are concerned at the number of cases in the UK, and have called for tougher restrictions on British travellers.

This move was initially backed by Mr Macron, because Delta represents some 20 per cent of new cases in France, and the proportion is likely to be above 50 per cent by August.

Professor Delfraissy now thinks a fourth Coronavirus wave is now inevitable in France, whether the British are allowed in or not.

The UK is currently listed as an Orange country by France, meaning that Britons are allowed in with no restrictions if they are fully vaccinated and have a negative Antigen or PCR test result.

This has opened the way for hundreds of thousands of Britons to holiday in France this summer. 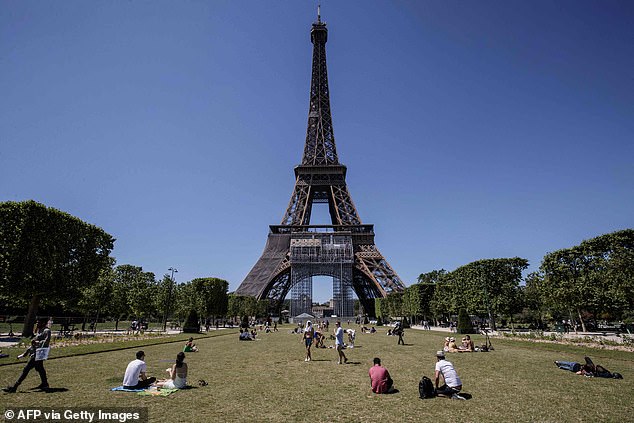 Pictured: People sunbathe in Paris’ Champs de Mars park next to the Eiffel Tower. The UK is currently listed as an Orange country by France, meaning that Britons are allowed in with no restrictions if they are fully vaccinated and have a negative Antigen or PCR test result The move to ban Brits was initially backed by Macron (pictured speaking in Paris on Tuesday)  because Delta represents some 20 per cent of new cases in France, and the proportion is likely to be above 50 per cent by August

Putting Britain on a red list will mean the British will have to have a ‘compelling reason’ for entering France, and they will also need to undergo a period of isolation.

Whatever happens, those holidaying in France still face harsh restrictions when they return to the UK.

Even those who are double jabbed have to isolate for up to 10 days and pay for expensive PCR tests administered by private companies.

Despite Delta, the Coronavirus pandemic is in retreat in France, with just 18.5 cases per 100,000 people reported over the past week. This compares to 500 at the height of the second wave at the end of last year.

By comparison, the UK’s cases are rising, with over 20,000 new cases recorded on Tuesday. But despite this, hospitalisations and deaths have remained relatively flat as its successful vaccination campaign continues to be rolled out.

‘We must not panic but we must be realistic and aware,’ said Professor Delfraissy. ‘The very low figures are falsely reassuring. We had broadly comparable figures in June 2020, and yet we saw the second wave arrive in September.’

Professor Delfraissy added: ‘I think we will have a fourth wave, but it will be much more moderate than the previous three waves because the level of vaccinations is different compared to before.’

But Merkel, along with Emmanuel Macron, wants EU member states to accept a blanket ban on arrivals from the UK, urging them to relinquish their border sovereignty and hand it over to Brussels. 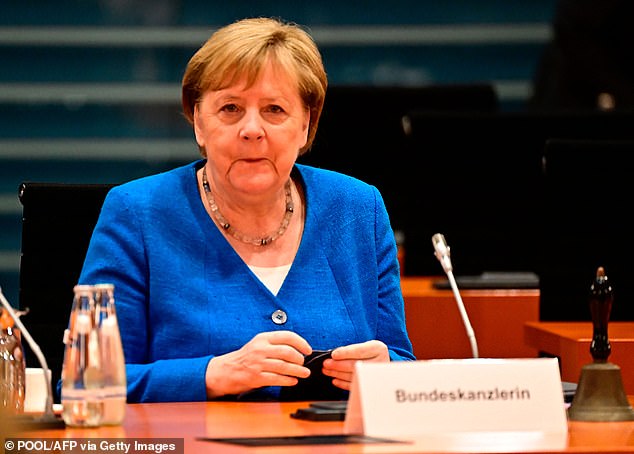 German Chancellor Angela Merkel (pictured on Wednesday in Berlin), along with Emmanuel Macron, wants EU member states to accept a blanket ban on arrivals from the UK

France and Germany claim that this is because of the Indian variant, but critics have argued that it is political, fuelled by lasting bitterness over Britain’s world-beating vaccine programme and Brexit.

Although Britain is experiencing an uptick in new Covid cases blamed on the Indian variant, it has the highest proportion of citizens vaccinated than any other country in Europe.

But Germany has designated Britain as a virus variant risk area, meaning only German nationals or residents are allowed to enter from the UK, barring a few exceptions.

All UK arrivals, including vaccinated people, face a 14-day quarantine in Germany.

Strict travel curbs imposed by both countries are expected to dissuade many German fans from making the trip to England. 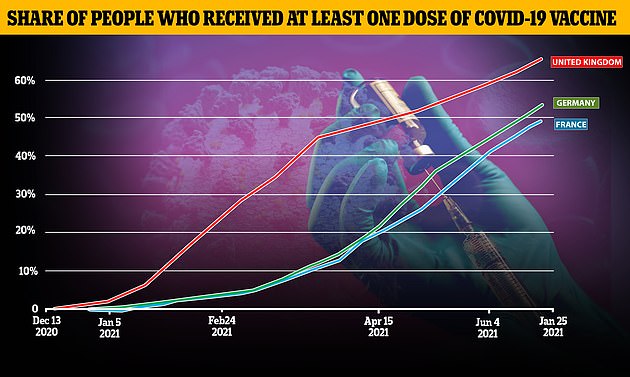 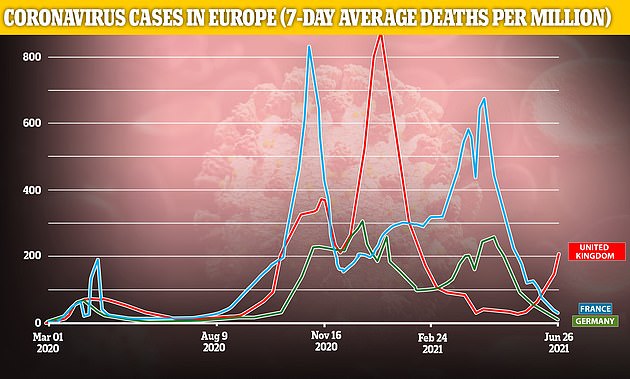 Merkel has in recent days repeatedly expressed concern about the Euro championship fuelling the spread of the Indian variant on the continent.

She has also criticised a lack of European-wide coordination on entry restrictions for travellers from risk areas.

In Germany, the Delta strain now accounts for around half of all new coronavirus cases, the head of the country’s Robert Koch Institute for infectious diseases told a meeting attended by Health Minister Jens Spahn on Monday.

Spain and Greece were last night leading the resistance to Germany’s demand for Europe to effectively ban British holidaymakers this summer.

EU diplomats clashed at a behind-closed-doors meeting in Brussels, with German officials pushing hard to convince other countries to quarantine all UK arrivals – even those who’ve been vaccinated.

Meanwhile, British holidaymakers with trips booked to Malta have seen their plans thrown into chaos after the country announced it is not accepting the NHS app as proof of vaccination. 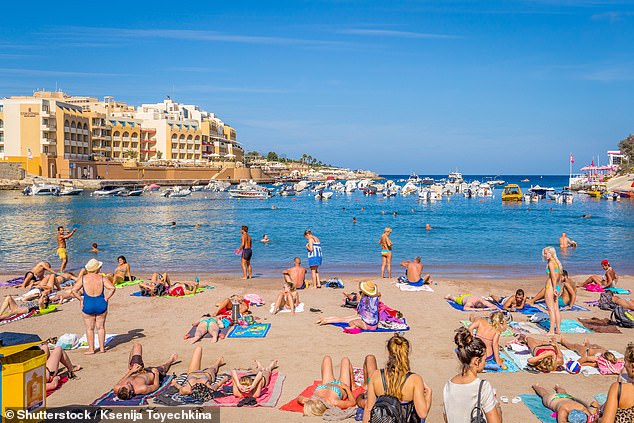 Pictured: A beach in St. Julians, Malta (file photo). British holidaymakers with trips booked to Malta have seen their plans thrown into chaos after the country announced it is not accepting the NHS app as proof of vaccination 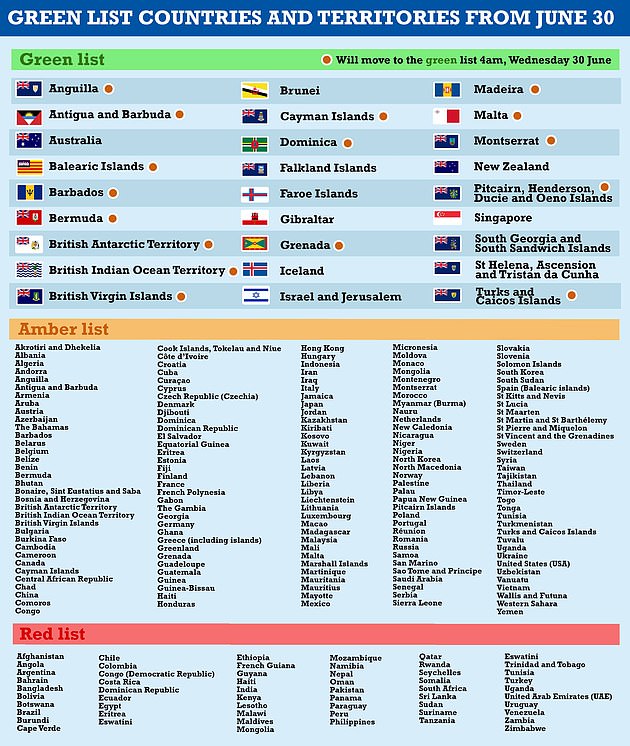 From Wednesday, travellers from the UK aged 12 and above are only permitted to enter Malta if they have had both doses of a coronavirus vaccine.

But authorities in the central Mediterranean archipelago revealed on Monday that they will only accept printed letters sent by the NHS as proof.

That means tourists planning to use the NHS app to demonstrate their status face being turned away at UK airports or the border in Malta, even if they are fully vaccinated.

To request an NHS vaccine letter, you have to fill out a form online, which you can only do two weeks after your second jab.

The UK Government’s website states that letters then take ‘up to five working days’ to be delivered.

This means that Britons hoping to go on holiday in the next few days will be unable to go to Malta – even if they have booked flights.

The reason for the rule change is unclear, though travel websites suggest the Maltese government fear the QR code on the NHS app can be easily forged.

Malta was set to be added to the UK’s green list from June 30 – meaning that Britons would be able to travel to the island and return without needing to self-isolate. 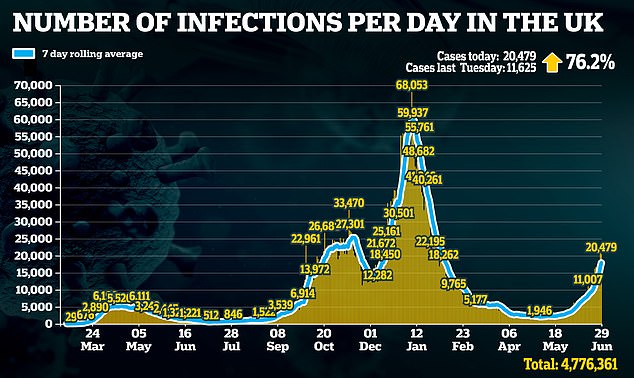 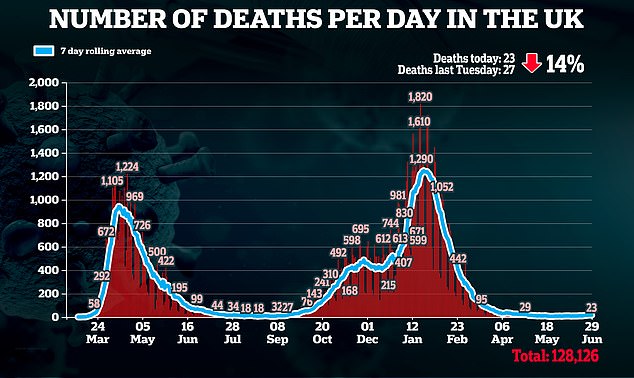 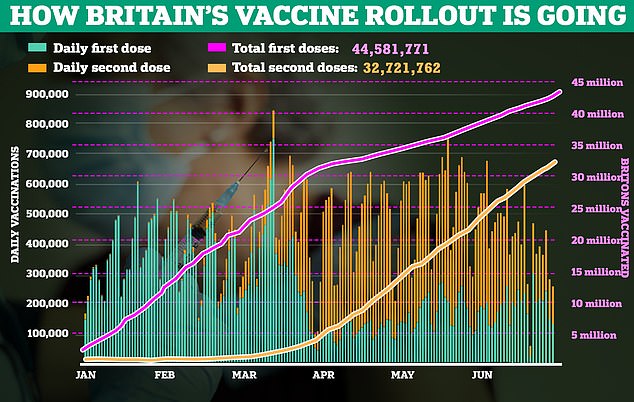