The United States lost their first Olympic men’s basketball match since 2004 as they went down 83-76 to France in their opening group match of the Tokyo Games on Sunday night.

The Americans, who have previously won gold three times at the Olympics arrived in Japan short of star power after a number of withdrawals, injuries and Covid-19 issues, and it showed as they made a sloppy start to the competition.

Boston Celtics’ Evan Fournier scored 28 points for France, who dominated the third quarter of the Group A contest and then survived a fourth-quarter rally to claim a famous victory. 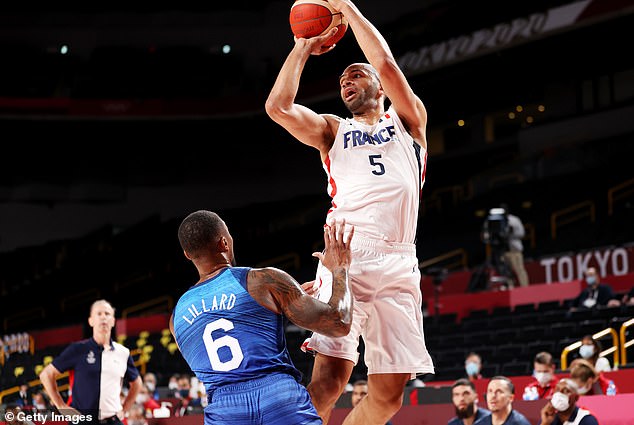 The Americans began the fourth quarter on a 13-1 run, leading 69-63 when Jrue Holiday made a lay-up, but the French came storming back thanks to big three-pointers from Nicolas Batum and Fournier respectively.

Fournier put the French back in front, 76-74, with 57 seconds left and they had the better of a scrappy finish as the Americans squandered several chances inside the final minute to hand victory to France.

It was a first Olympic defeat for the United States men’s team since the semi-finals of the Athens Games, when they were beaten 89-81 by eventual champions Argentina.

Gregg Popovich’s team must look to repair some of the damage when they face Iran in their second game on Wednesday. 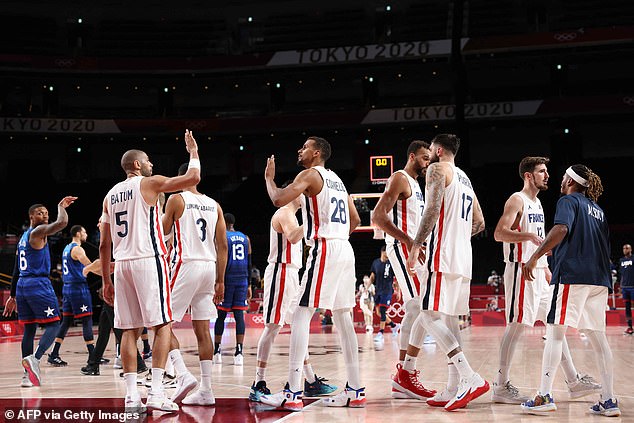 Despite NBA names, the U.S. basketball stars are a shadow of the original ‘Dream Team’ and they’re as likely to finish OFF the podium as to waltz off with gold, writes MIKE COLMAN

When I heard an Australian TV reporter this week refer to the USA men’s basketball outfit currently preparing for their first game of the Tokyo Olympics as ‘the Dream Team’ I nearly fell off my chair.

I covered the original Dream Team at the Barcelona and Atlanta Olympics, and to put this current side in their league is, quite frankly, an insult.

The 1992 Dream Team featured the likes of Michael Jordan, Magic Johnson, Larry Bird, Scottie Pippen and Charles Barkley. It was unquestionably the greatest side ever assembled.

Four years later Jordan, Magic and Bird were gone, but with the addition of such players as Shaquille O’Neal, Reggie Miller, Penny Hardaway, Hakeem Olajuwon and Gary Payton, the side was still very much deserving of the Dream Team label.