France Football announces its Ballon d’Or ‘Dream Team’ which sees Lionel Messi, Cristiano Ronaldo and the Brazilian Ronaldo lead from the front in a star-studded line up selected by 140 journalists from around the world

With this year’s Ballon d’Or award cancelled due to the coronavirus pandemic, France Football – the weekly magazine that created the award – opted to instead announce the best XI in its place.

Journalists from 170 countries cast their votes on who would make the team, which lines up in a 3-4-3 formation. 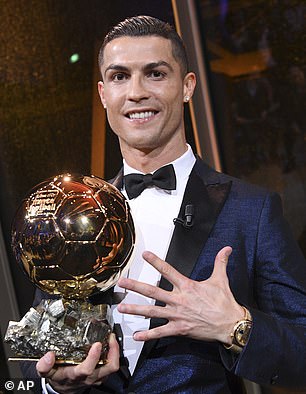 On Monday afternoon, they staggered their announcements by the hour, with goalkeeper and defenders being revealed first and then midfielder and attackers followed.

In goal, Russia’s legendary goalkeeper Lev Yashin was named in between the sticks, cementing his legacy as arguably the greatest No 1 of all time.

Yashin, who won the Ballon d’Or in 1963 and remains as the only goalkeeper in history to win it, made 74 appearances for the Soviet Union between 1954 and 1970.

In front of him, a back-three of Franz Beckenbauer, Cafu and Paolo Maldini make up the rock-solid defence.

Widely considered as one of the greatest footballers of all time, Beckenbauer is the only defender to win the Ballon d’Or on two separate occasions, having won everything for club and country with Bayern Munich and Germany. 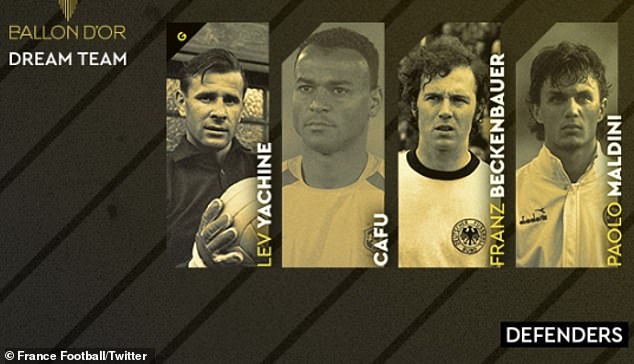 Lev Yashin was named in goal while Cafu, Beckenbauer and Maldini made up the defence

Either side of him are more recent additions of Brazilian full-back Cafu and Italian legend Maldini.

Unlike Beckenbauer, neither Cafu or Maldini ever won the award but are both recognised as some of the best in their position. Maldini finished third twice in the Ballon d’Or voting in 1994 and 2003.

In front of them, Xavi, Lothar Matthaus, Pele and the late great Diego Maradona made up the four-man midfield.

Xavi won the World Cup and two European Championships with Spain while also making up one of the best midfields to ever grace the game during his time at Barcelona. 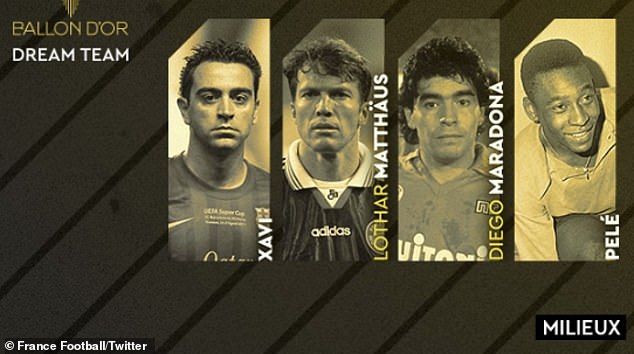 Xavi, Lothar Matthaus, Diego Maradona and Pele made up the four-man midfield

Alongside him as a defensive-minded pick was Matthaus, who won the Ballon d’Or in 1990. Another player who replicated Beckenbauer’s success of winning everything for Bayern Munich and Germany.

Pele, arguably the greatest player of all time, plays alongside Maradona who sadly passed away last month.

The two South American icons have long been the two contenders for GOAT-status in football, with Pele winning three World Cups while Maradona single-handedly guided Argentina to the trophy in 1986.

There was never any doubt that Messi or Cristiano would make the team, considering they’ve dominated the award over the last decade. 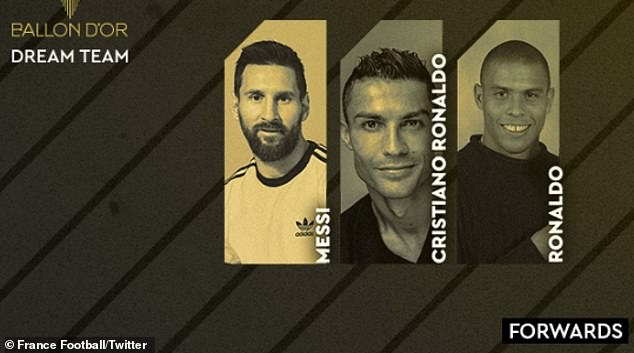