France has lashed out at post-Brexit rules restricting their access to British waters, claiming that London is making changes arbitrarily without consulting Brussels.

French fishermen last night threatened to block British boats from landing in France if London continued to limit fishing off Jersey as the EU warned against ‘discriminatory actions towards our fishermen.’

The British government has authorised 41 trawlers with Vessel Monitoring System (VMS) technology – which allows ships to be located – to fish in waters off Jersey.

The French fisheries ministry asserts that London has effectively made new zoning rules for the waters – ‘where the ships can go and cannot go’, as well as the number of days the fishermen can spend at sea and with which machinery. 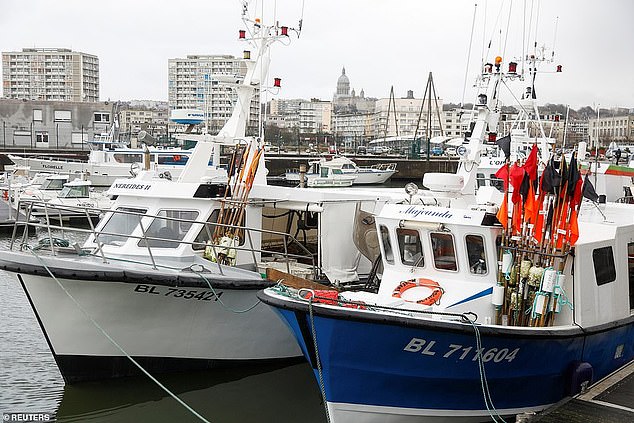 Fishing boats are seen at a port in France. Dimitri Rogoff, president of the regional fishing committee of Normandy in northern France, said that if French fishermen continued to be blocked from the waters off Jersey, there should be reprisal measures.

Paris claims London has made new demands while imposing the VMS gear ‘which were not arranged or discussed, and which we were not notified about.’

Dimitri Rogoff, president of the regional fishing committee of Normandy in northern France, said that if French fishermen continued to be blocked from the waters off Jersey, there should be reprisal measures.

‘Fishermen from Jersey should not be able to land at Granville,’ he said, referring to the French port nearest the island.

French fishermen last month began a protest movement, blockading trucks bringing fish from Britain to France, over complaints that few of their vessels have obtained licences to operate in British waters.

France and Britain have increasingly clashed over fishing in recent weeks, with French fishermen saying they are being prevented from operating in British waters because of difficulties in obtaining licences.

The French fisheries ministry said Britain had introduced ‘new technical measures’ relating to licences for fishing off the Channel Islands which had not been properly declared to the European Union under the terms of the Brexit deal.

‘We consider that if the new demands for sea zoning or fishing equipment are integrated into the licences – when the European Commission has not been notified – they are null and void,’ the ministry told AFP.

The ministry said it was adhering ‘strictly to the deal’ agreed on fishing under the terms of Britain’s exit from the European Union on January 1.

‘If the United Kingdom wants to introduce new measures, it must notify the European Commission which in turn notifies us – that allows for us to engage in a dialogue,’ the ministry said.

‘These new technical measures are not applicable to our fishermen as things stand.’ 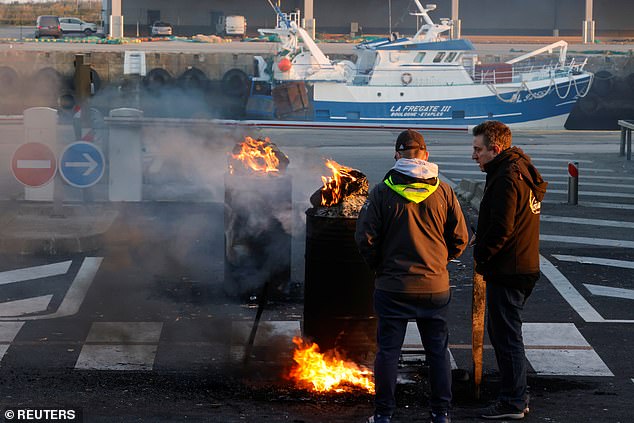 Fishing proved one of the most fraught issues in the frantic negotiations leading up to Britain’s departure from the EU, with London tightly guarding control over its waters as a symbol of its sovereignty.

France said it had voiced its displeasure at the surprise measures with the European Commission.

Commission spokeswoman Vivian Loonela said the EU was engaged in ‘intense joint work’ with the British government to resolve the issue.

‘Any condition should be notified in a timely way to allow the other party sufficient time to comment or adapt,’ she said of the new British requirements.

‘In addition, any such conditions cannot be discriminatory towards our fishermen.’