France has hit Google, Apple, Amazon and Facebook with tax bills totalling hundreds of millions of dollars in a fresh crackdown on tech giants by European regulators.

The new levy will see the firms tech taxed 3 per cent on earnings from online sales, digital advertising and the sale of private data.

France first introduced the tax in 2019 – when it raised $410million – but suspended collection of the money after the US threatened to respond with trade tariffs.

The French gave US officials a year to sort out an alternative arrangement with the Organisation for Economic Co-operation and Development, a deadline that expired without a deal after America walked out of talks.

Reimposing the tax has sparked fears that the US could follow through with its threat to impose levies on $1.3billion in French goods, including handbags and cosmetics.

France has slapped US tech companies including Google (file), Amazon, Facebook and Apple with fines totalling hundreds of millions of dollars

It also comes amid a crackdown on US tech firms within Europe generally, that has seen billions of fines issued for anti-competitive practices in recent years.

Speaking last month as he confirmed the tax would be making a comeback, French finance minister Bruno Le Maire said it is only fair that tech firms pay their way.

‘Do we accept that the big winners of the economic crisis, the digital giants, continue to be taxed less than other companies,’ he asked.

‘My response: no. Three times no.’

The tax seeks to partially-close an EU loophole often exploited by tech giants that allows the companies to report all of their earnings in one member-state country.

Firms typically use the low-tax regions of Ireland and Luxembourg for that purpose, despite not having a large presence in either country.

The French tax will apply to all companies whose annual revenues are above $670million, with earnings in France of more than $30million.

That is thought to affect around 30 firms, most of which are American, The Telegraph reports. 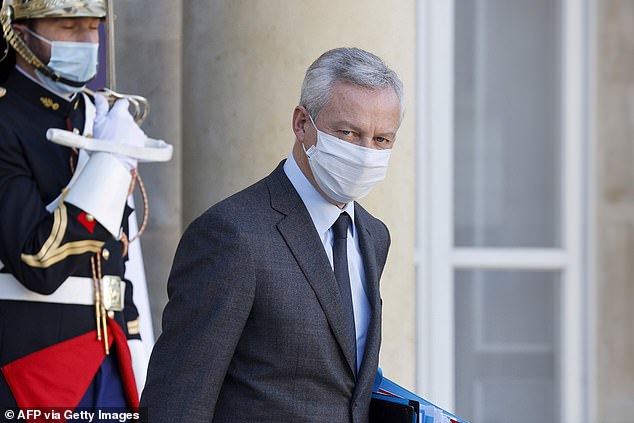 Announcing the tax last month, Finance Minister Bruno Le Maire said it was only fair that companies which have profited most from the Covid pandemic pay their fare share

US regulators have complained that the tax is punitive and that their companies are being unfairly targeted, though Chinese and European firms will also be affected.

It comes after Margrethe Vestager, the top antitrust regulator in the European Union, hit Google with $9.4billion in fines over three years for breaching anti-trust laws.

The EU also hit Apple with a $15billion fine over its tax arrangements in Ireland, which was subsequently overturned on appeal

In France, Apple was fined Apple $1.2billion for price-fixing earlier this year and was previously hit with a $30million fine for using updates to slow down older phones.

Vestager is now pursuing fresh cases against Amazon, Facebook and Apple, seeking ‘structural changes’ to the way the companies operate.

Meanwhile Britain, Spain, Italy and other European countries have announced digital taxes to give them a bigger share of profits that tech firms make from their citizens.

The surge in sales for online retailers during the Covid-19 lockdowns across Europe this year has added to pressure on governments to take a tougher fiscal stance, not least to help pay for massive aid programmes for businesses forced to close. 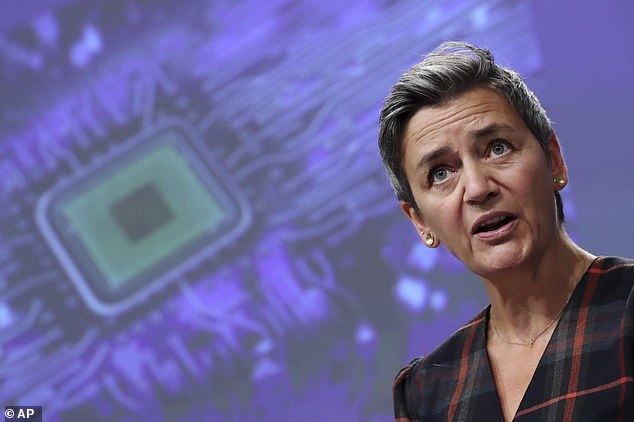 It comes after the same firms were hit with billions of euros in fines, led by EU chief antitrust regulator Margrethe Vestager (pictured)

But France has spearheaded the effort to wrest a compromise from Washington, and Wednesday’s announcement might reflect hopes in Paris that the incoming administration of Joe Biden will prove more amenable to a global deal.

‘The Covid-19 pandemic makes the need for a solution even more compelling,’ the OECD said last month.

It added that failure to reach a comprehensive deal would encourage more countries to take unilateral action that would only further stoke trade tensions.

The OECD plan on the table addresses two issues – how to tax firms in every country where they operate, and how to ensure that each country gets a fair portion of a multinational’s taxes.

An accord would likely set a minimum base tax, potentially of 12.5 percent, that would apply to every company no matter where it is based or declares its income.

The digital tax fight is just one front in the trans-Atlantic trade battle launched by Trump – last year his administration imposed 25 percent tariffs on a range of European delicacies in a battle over subsidies to planemaker Airbus.

The EU responded this month with its own round of tariffs on US imports after the World Trade Organization faulted Washington over state aid for Boeing.