France ski holiday: The joys of taking the TGV to Les Arcs

It’s a double dollop of excitement.

I’m on a TGV snaking out of Paris Gare de Lyon. The destination? Les Arcs in the French Alps. It’s a world-class ski resort and my four-year-old daughter will be having her first ski lesson. And hopefully, I’ll find time for a spot of snowboarding.

Summit special: Les Arcs in the French Alps is a ‘world class’ ski resort that forms part of the immense Paradiski ski area. Pictured is a view to the 2,600m (8,530ft) Col de la Chal lift junction in the Arc 1950/2000 area, where the Transarc gondola from Arc 1800 (pictured horizontally along the top) finishes

Dollop two? The train journey there, to Bourg-St-Maurice at the foot of Les Arcs, is one of Europe’s greatest – though I’ve never heard it lauded as such.

But it really is.

And what’s more, the final leg will be on an amazing 2.9km-long funicular railway that ascends 2,657ft to the resort itself, with views of Mont Blanc along the way.

The initial part of this blockbuster journey brings the thrill of travelling at 200mph on one of the world’s most advanced trains.

This is no 9.43 from London Bridge to Orpington via Hither Green. This is F1 train travel. 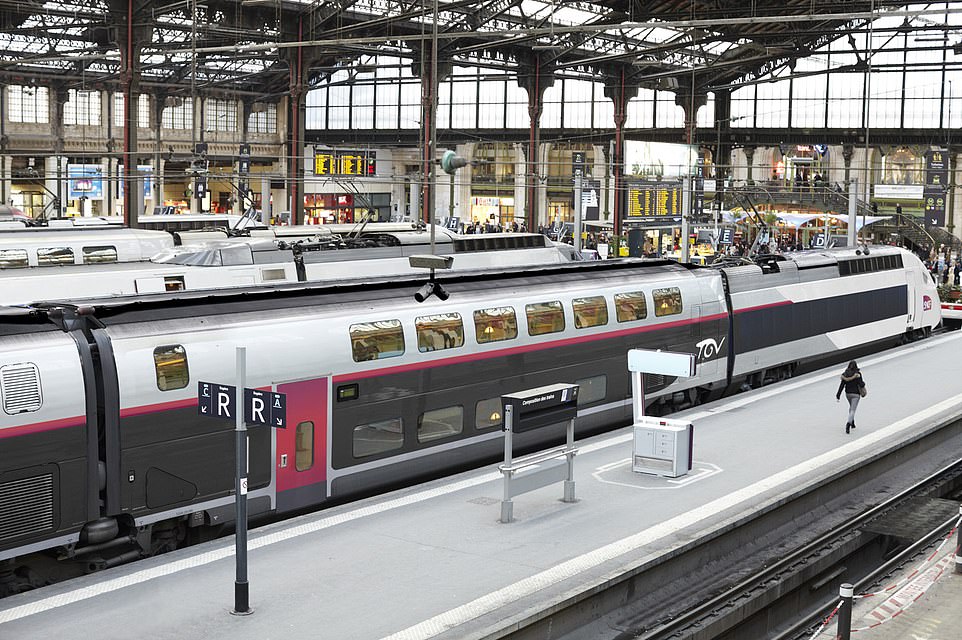 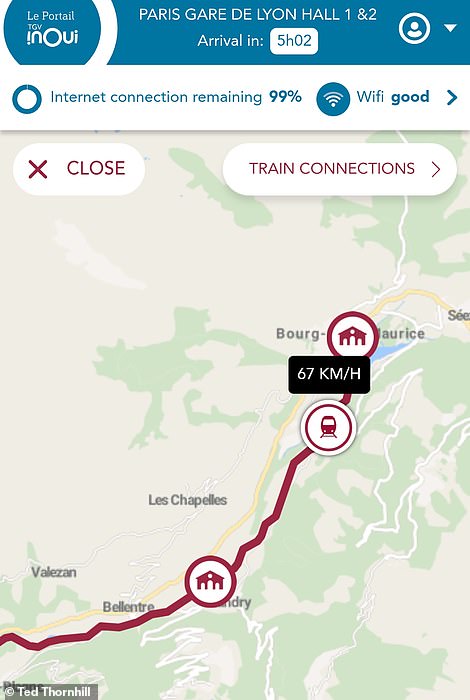 SNCF has a snazzy app that tracks the movement of the train on a map, indicating its speed, station stops and nearby points of interest. This is a screenshot taken during Ted’s return journey

My daughter tries to embark upon a game of counting animals in fields, but the speed they’re rushing past as the train hurtles south is throwing a spanner in the works.

The second part of the journey is slower – but just as thrilling, courtesy of truly epic scenery.

SNCF has a very snazzy new app that tracks the movement of the train on a map, indicating its speed, station stops and nearby points of interest.

I note that it’s at Amberieu-en-Bugey, around 280 miles (450km) south of Paris and 115 miles (185km) from Bourg-St-Maurice, that the landscape begins to widen the eyes, the line twisting through a steep-sided winding valley alongside a road and the gushing Albarine river.

Then it’s cameras at the ready as the train crosses the mighty Rhone and hugs the eastern shoreline of spectacular Lake Bourget, the largest natural lake in France, mountains looming all around.

After leaving Chambery shortly after this, it’s on to Albertville, the gateway to the jaw-dropping Tarentaise Valley, a land of ruined castles perched on rocky outcrops and towering snowy peaks, and one that acts as a passageway to some of the finest ski resorts in the world – Courchevel, Meribel, Val D’Isere, Tignes, La Plagne and Les Arcs.

Bourg-St-Maurice is the end of the line. 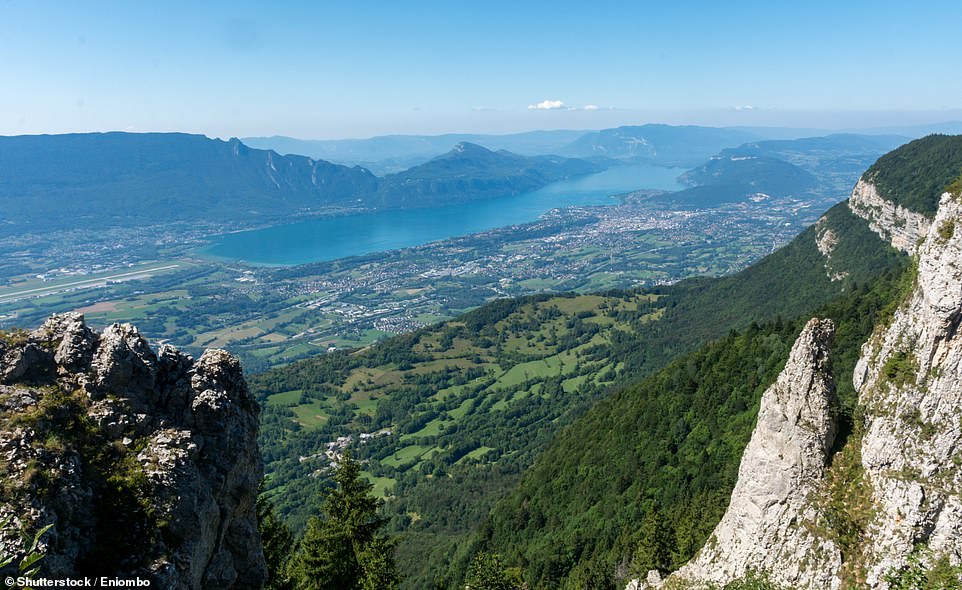 The TGV to Bourg-St-Maurice hugs the shoreline of spectacular Lake Bourget (pictured), the largest natural lake in France. This is a view looking north-west, with the railway track running along the shore nearest to the camera 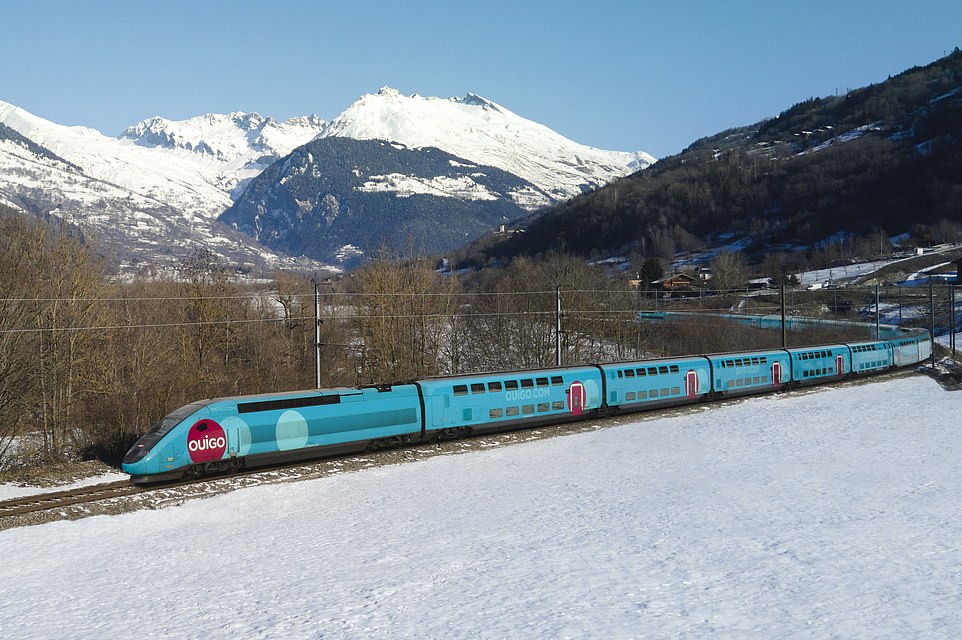 Head for the chills: A TGV is pictured here in the breathtaking Tarentaise Valley, a land of ruined castles perched on rocky outcrops and towering snowy peaks. The valley is a passageway to some of the finest ski resorts in the world – Courchevel, Meribel, Val D’Isere, Tignes, La Plagne and Les Arcs 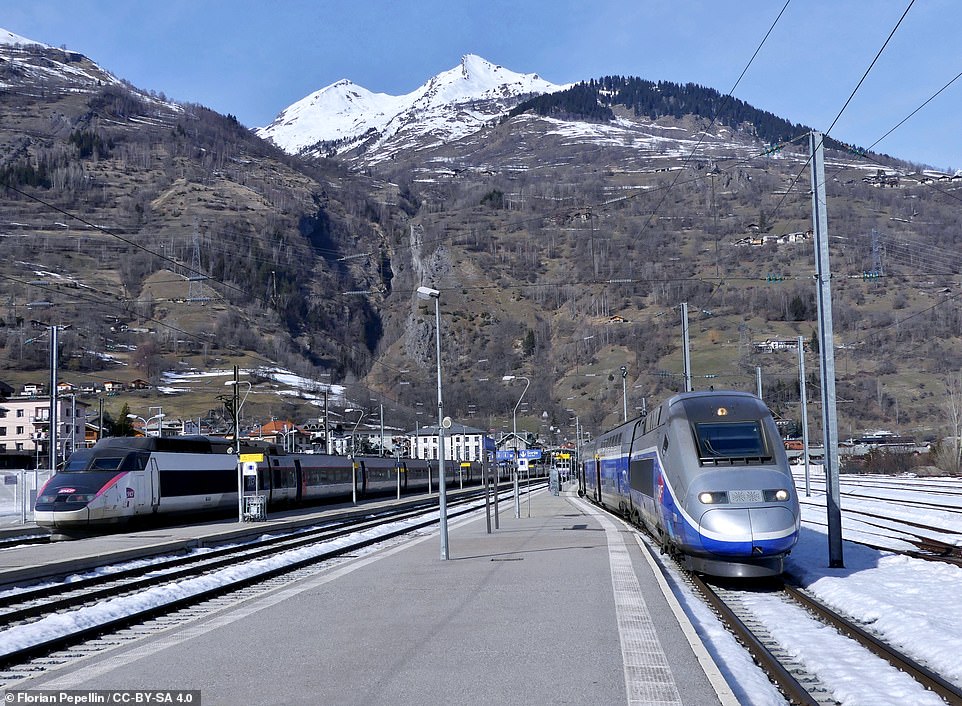 This image shows two TGVs at the Bourg-St-Maurice terminus. The funicular to Les Arcs is accessed by walking along the platform and over a footbridge that’s behind the photographer. Picture is courtesy of Creative Commons licensing 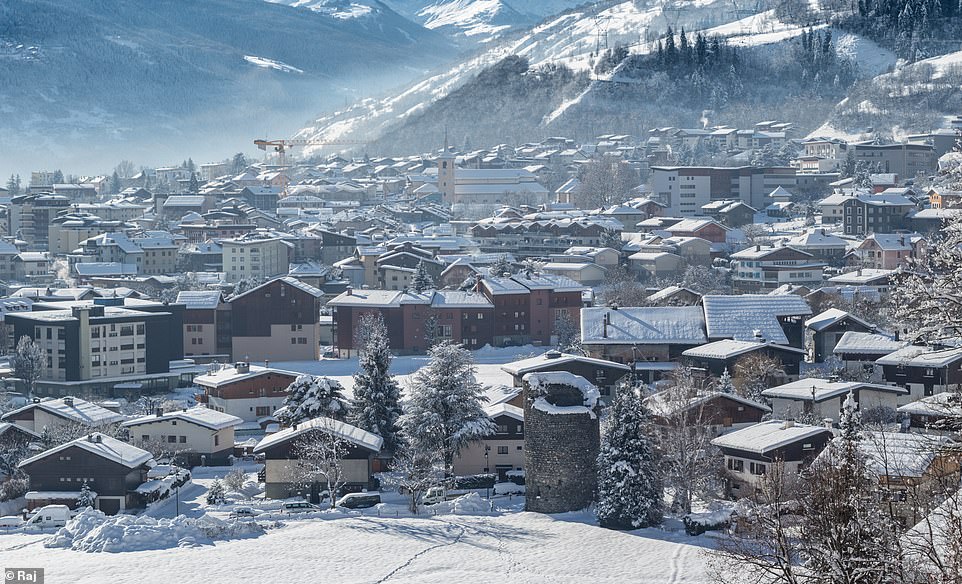 The train journey from Paris to Bourg-St-Maurice, pictured, takes around five-and-a-quarter hours

From the terminus, it’s a short walk to the exhilarating funicular, which glides up to Les Arcs 1600 along a track with a 39 per cent gradient in places.

Make sure your suitcases are secure.

This is my fourth visit to Les Arcs, and by the end, my passion for the resort will remain undimmed.

I’ll resist the ‘it’s got everything’ cliché, but I can’t resist trumpeting that it has almost everything. 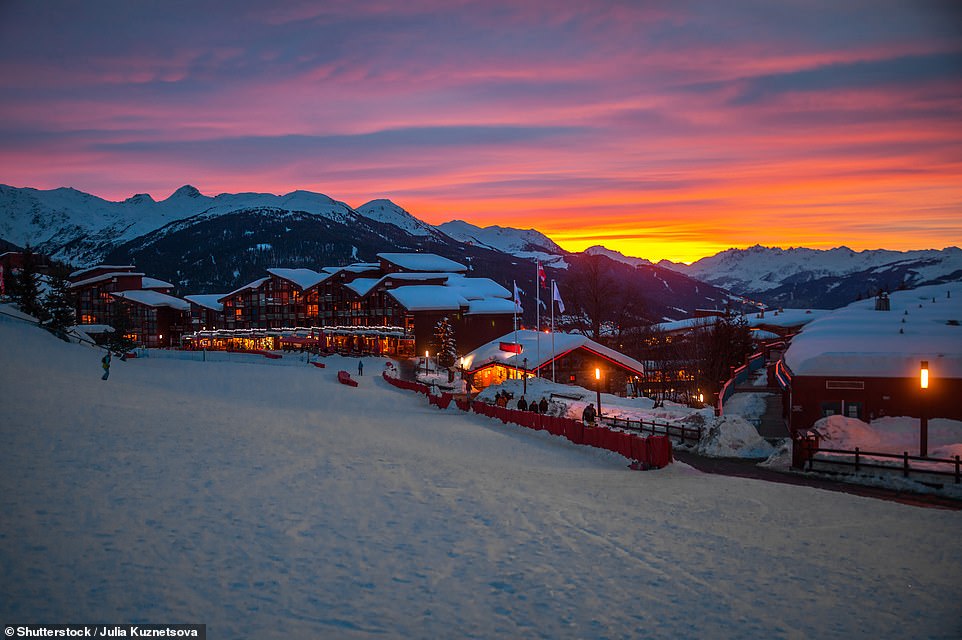 A picture of Arc 1800 during twilight. The resort was created from scratch in the 1960s 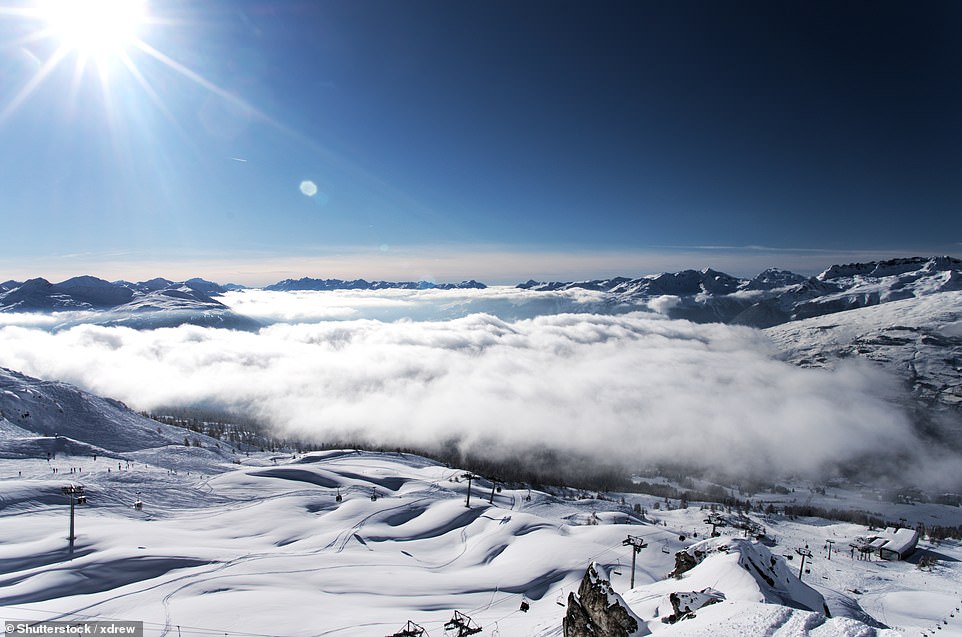 Brrr-illiant: A jaw-dropping picture of clouds rolling in over Les Arcs, which has various resort areas named according to their height

For starters, buy the top-level ski pass and you have access to a vast ski area – Les Arcs and Peisey-Vallandry, nestled together in one area, and La Plagne, accessed directly from Vallandry via an incredible double-decker cable car.

And here, the colours are accurate. The blues aren’t reds in disguise and the reds aren’t secret blacks.

The terrain is superbly varied, too. There are spine-tingling runs (blues and reds) that sweep through beautiful forests, wide cruise-y undulating pistes and vertigo-inducing trails that plummet through dramatic canyons.

The thrills up at Aiguille Rouge aren’t just piste-based, by the way.

While the views around Paradiski are undeniably breathtaking, not everyone is enamoured with the architecture, which is a tad ‘Marmite’.

Les Arcs was created from scratch in the 1960s and its lead architect was the renowned modernist Charlotte Perriand. 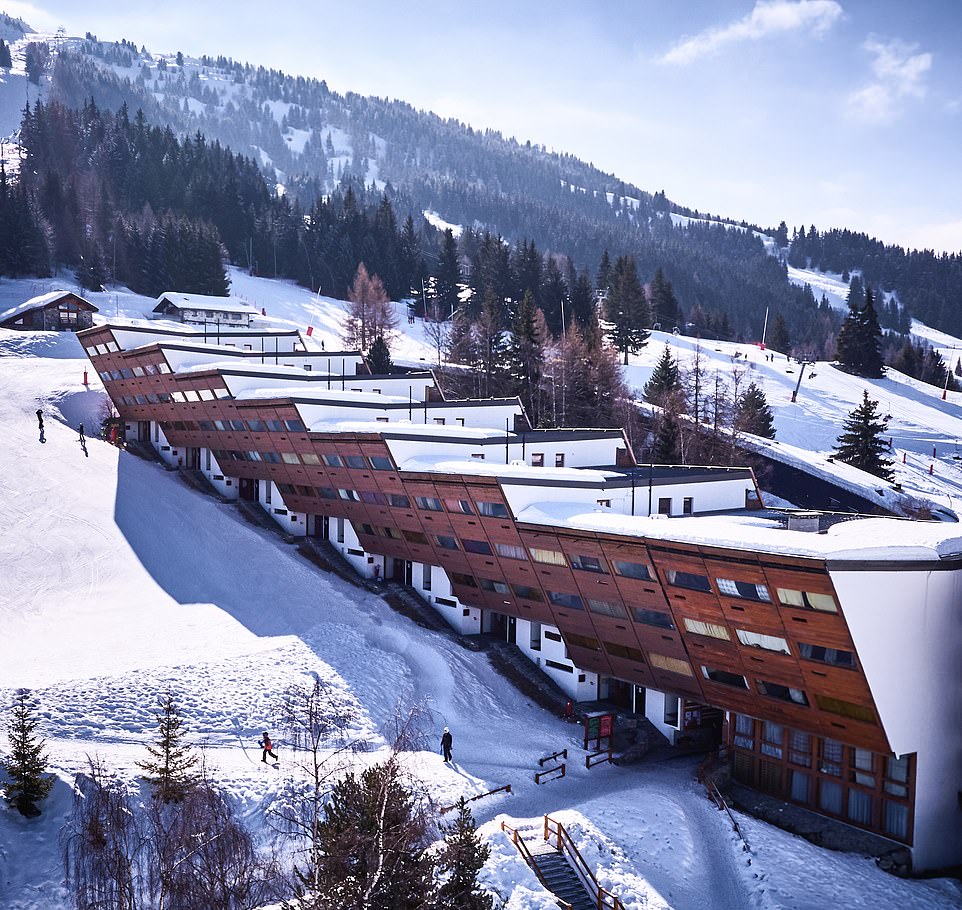 The lead architect for Les Arcs was the renowned modernist Charlotte Perriand. This image shows one of the resort buildings she created, which leans into the mountainside 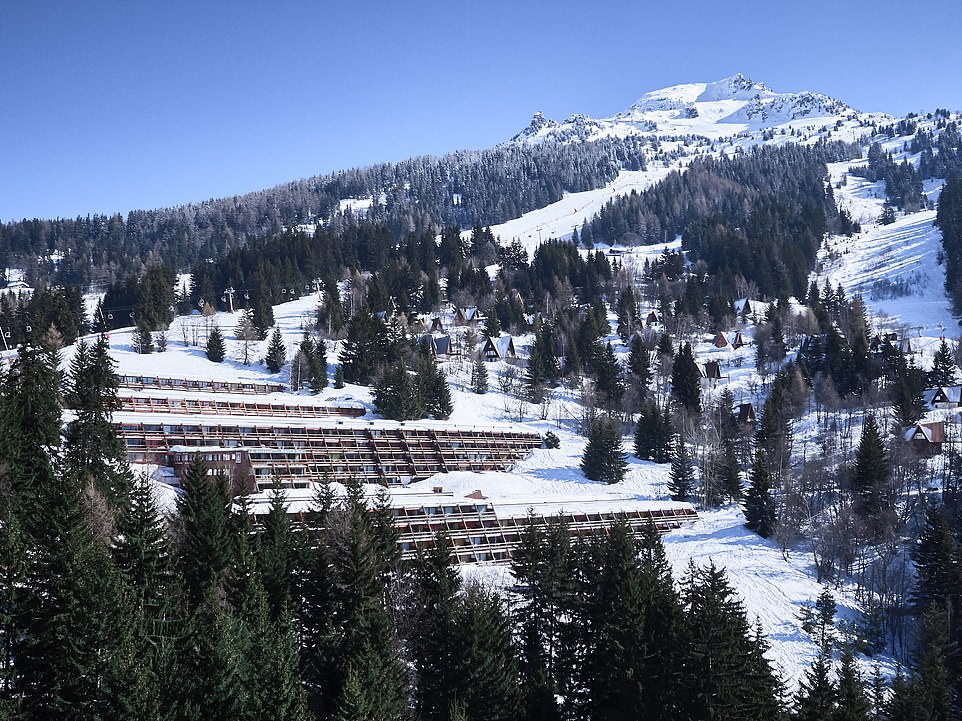 Perriand’s designs aren’t for everyone – but they’re certainly striking. Want some Perriand at home? Her dining room tables fetch around £150,000

If you want some Perriand at home, by the way, be prepared to sell a car or two. Or even a house. Her dining room tables fetch up to around £150,000.

Our base of operations for the stay is the self-catering Pierre & Vacances Residence Le Belmont in Arc 1800, which we reach via a free shuttle bus from the funicular station at 1600.

It has a more luxurious counterpart in Arc 1950, but Le Belmont wins us over thanks to friendly reception staff and a clean and comfortable split-level apartment with everything we need for our stay – on the lower level there’s a little kitchen with a cooker, dishwasher and filter coffee machine; a living room/dining area with a sofa, chair and TV; and on the slightly higher level an ensuite bathroom and separate loo and a double bedroom with a camp bed that slides out from under the big bed for the little one.

There’s also tonnes of storage, a huge balcony and bonus points for the wacky sloping corridor outside. 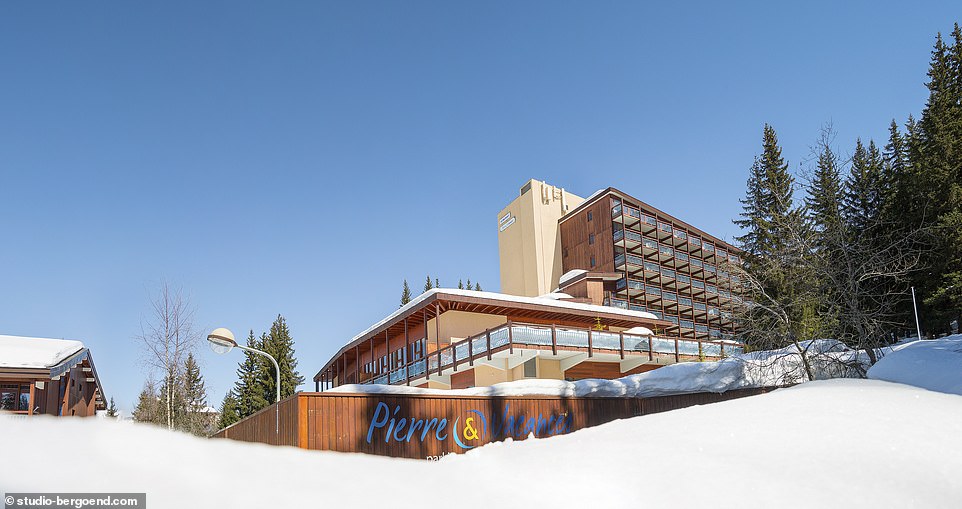 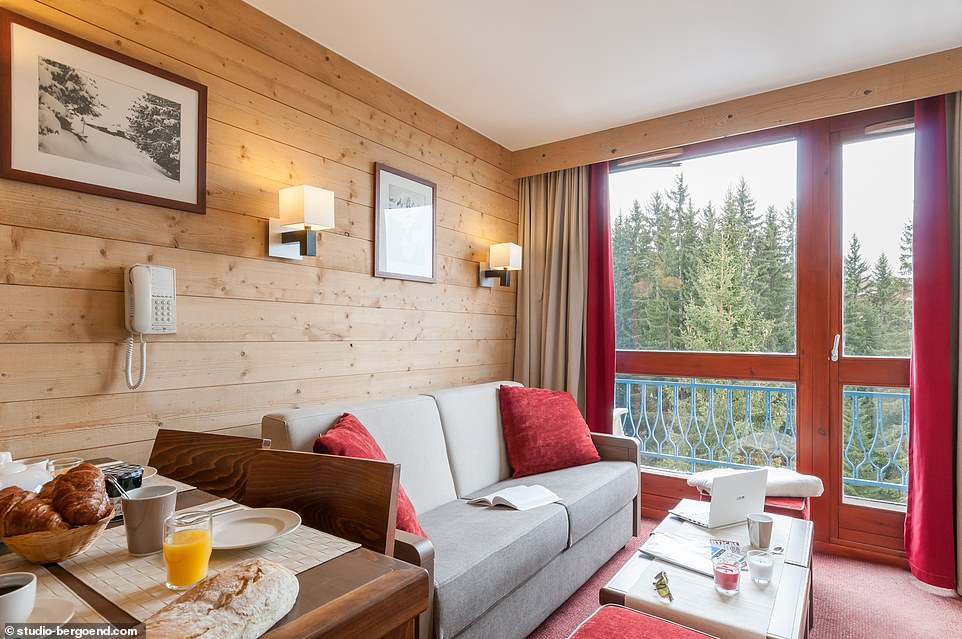 The living room in Ted’s Pierre & Vacances apartment (pictured) has a small kitchen, dining room table, sofa and a TV 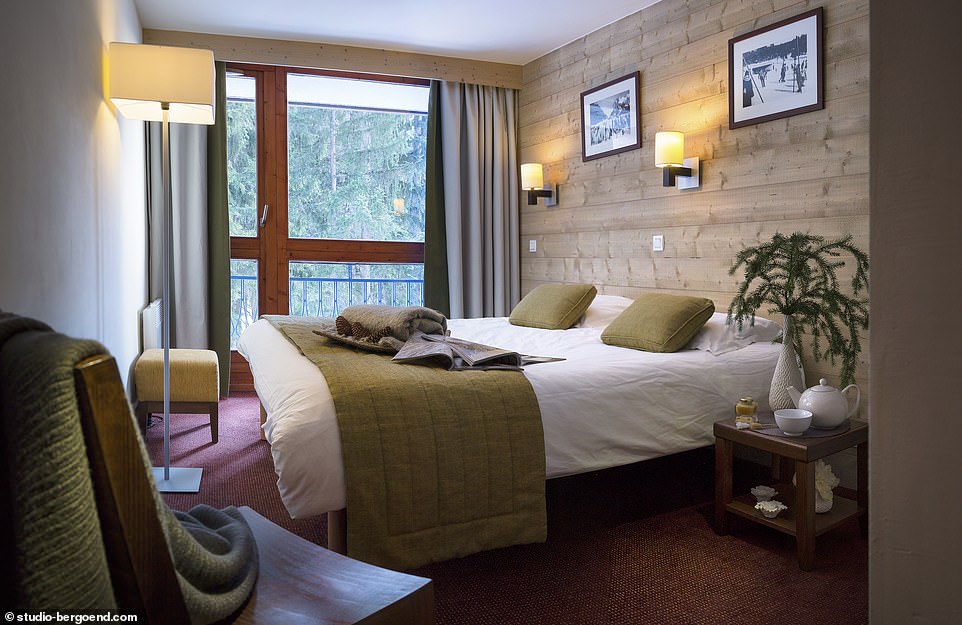 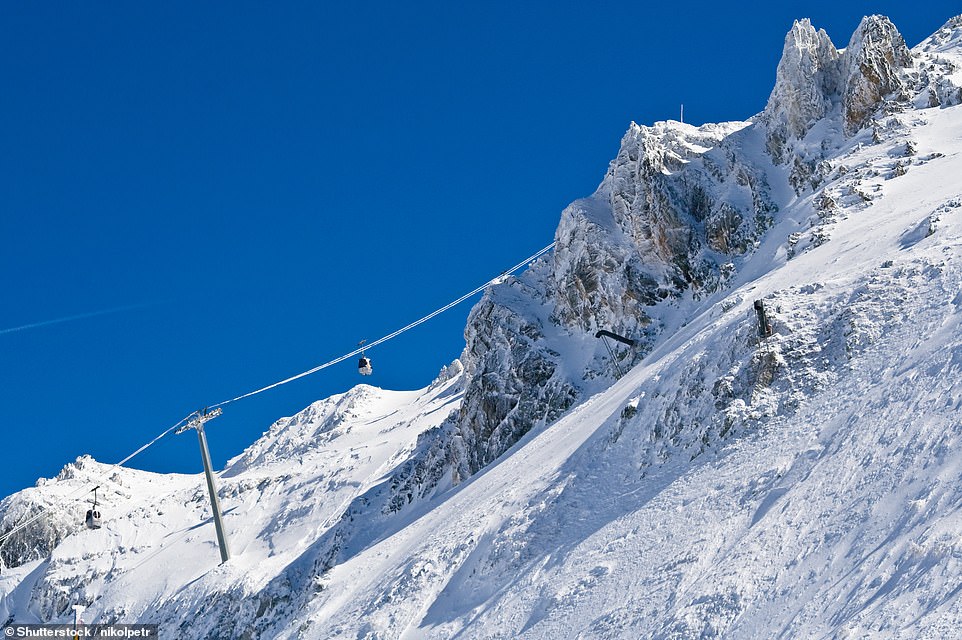 The Transarc gondola that takes skiers from Arc 1800 to the 1950/2000 area, up and over the dramatic ridge shown

Le Belmont is convenient, too, with a Skiset hire shop by the entrance and a gem of a gondola lift next to the boot-room exit – the two-stage Transarc – which takes you to a strategically handy midpoint on the 1600/1800 area and then rises sharply over a ridge to the huge Arc 1950/2000 valley, where skiers and snowboarders can access lifts to the Aiguille Rouge peak.

Shopping is easy thanks to a great Sherpa supermarket a few minutes’ walk away and Arc 1800 is crammed with good eating and drinking out options (we enjoy Les Jumeaux, Arcus Coffee and Le Madly).

The only niggle with the apartment is the Wi-Fi – we have to regularly sign in to it, sometimes several times a day.

There is an ESI ski school for children next to the apartment, but we enrol the little one at an ESF Club Piou-Piou ski school for three-to-five-year-olds that’s a bit of a walk away at the pace of a four-year-old (about 500 metres) along snowy and icy pathways – but crucially, she loves the lessons and there are tears every day when we explain that she’ll have to take her skis off. 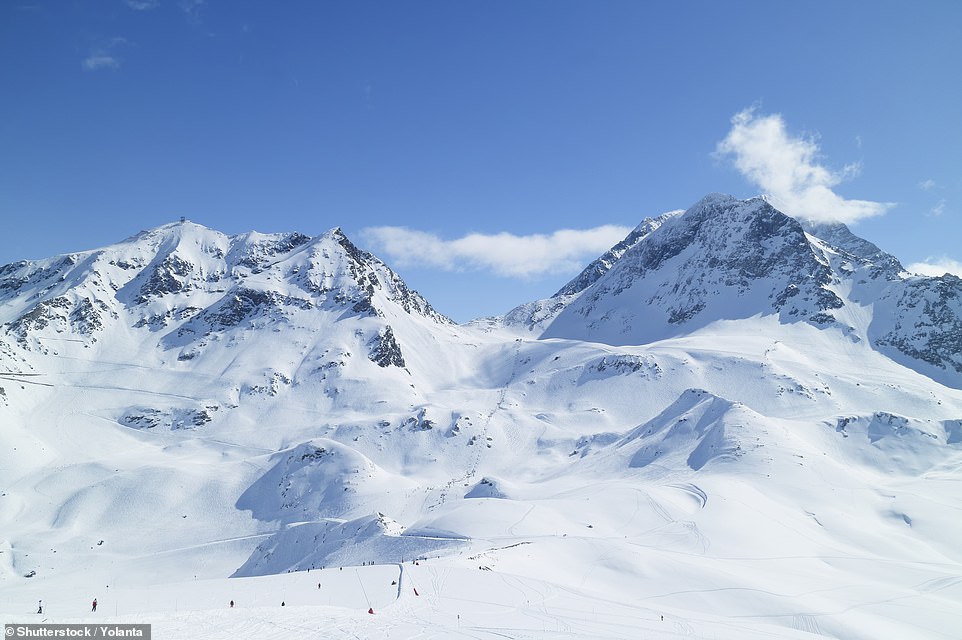 Feeling peak-y: To the left of this image is the highest lift station in Les Arcs. It sits on the Aiguille Rouge summit at an altitude of 3,226m (10,583ft)

Piste de resistance: Mont Blanc serves as a stunning backdrop to this picture of Arc 1950 and 2000 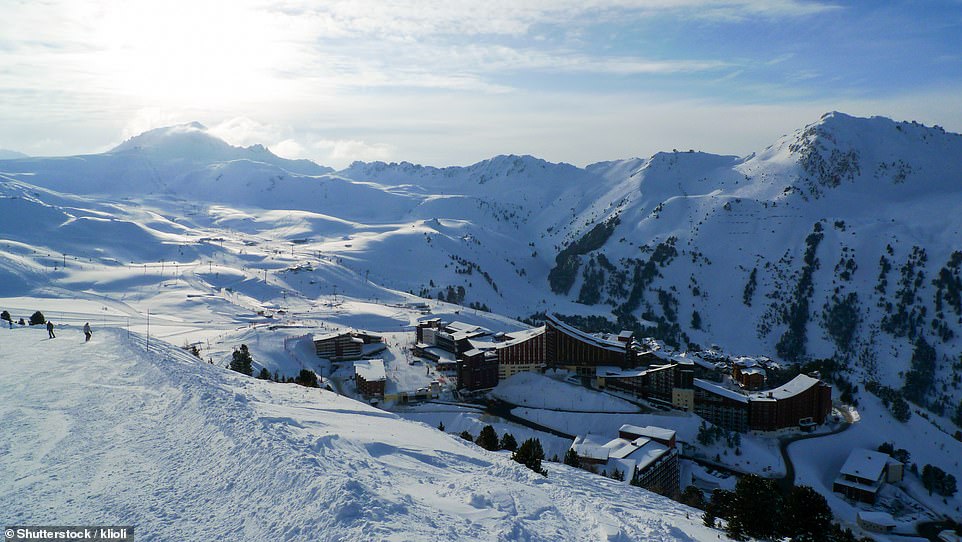 Powder to the people: A view of Arc 1950/2000, looking towards Col de la Chal in the distance. Ted and his partner enjoy a thrilling afternoon descending through this valley on a wonderful series of blue runs

The torrent of tears we manage to reduce with the purchase of a sledge to tow her back and forth in.

We get all our ski and snowboarding paraphernalia from the well-stocked Le Belmont Skiset outlet, and it’s great quality (I’ve rented shocking equipment in the past).

I have a nicely waxed Nitro snowboard with Burton boots and bindings, professionally set up by a typically no-nonsense mountain-man staff member (don’t lean your snowboard or skis against his shop window as I foolishly do – oops – otherwise you’ll raise his gruff mountain-man hackles).

We parents manage to squeeze in a few epic piste sessions, including a glorious run from the top to the bottom of the 1950/2000 area via a meandering series of blues perfect for fine-tuning rusty techniques and getting accustomed to new equipment.

As per usual, I leave Les Arcs with a heavy heart, but there’s one more event to lift it – the glorious TGV journey back to Paris…

Ted and his family were hosted by Pierre & Vacances. Seven nights’ self-catering accommodation at the Residence Le Belmont in Arc 1800, in a studio apartment with cabin that sleeps up to four, is priced from £499 during the 2021/22 ski season. Flights and transfers extra. Pierre & Vacances (0870 0267 145, www.pierreetvacances.com/gb-en).

Ted paid 235 euros for three days’ ski and snowboard hire from Skiset for himself, partner and daughter.

Ted split his journey with a stay in Paris both ways, using the excellent Eurostar service to reach Gare du Nord in the French capital from London St Pancras.

Direct Eurostar services from London to Bourg-St-Maurice are also available.

Ted used the superb Blacklane chauffeur service to transport him to and from London St Pancras. It has a brilliantly user-friendly booking system and operates in more than 200 cities around the world. Visit www.blacklane.com/en.