France has announced plans to begin easing its coronavirus lockdown within two weeks – with schools and non-essential businesses set to reopen starting on May 11.

Prime Minister Edouard Philippe said permits will no longer be required to leave the house from that date and small museums will also be allowed to start readmitting guests.

However, people will still be instructed to work from home where possible while restaurants and bars will also remain shuttered, he told parliament.

Mr Philippe also stressed that the lockdown will remain in place if France’s daily infection total creeps back over 3,000 cases. Since April 15, the average number of daily cases was 2,162.

France is the latest European country to announce a staggered end to its coronavirus lockdown after cases and deaths on the continent went into decline – with Italy now in ‘phase two’ of its virus response and Spain expected to announce its own set of measures later today.

France will begin easing lockdown restrictions from May 11 with non-essential shops and schools the first to reopen. Masks will not be required in public, but shop owners can request the people wear them before entering 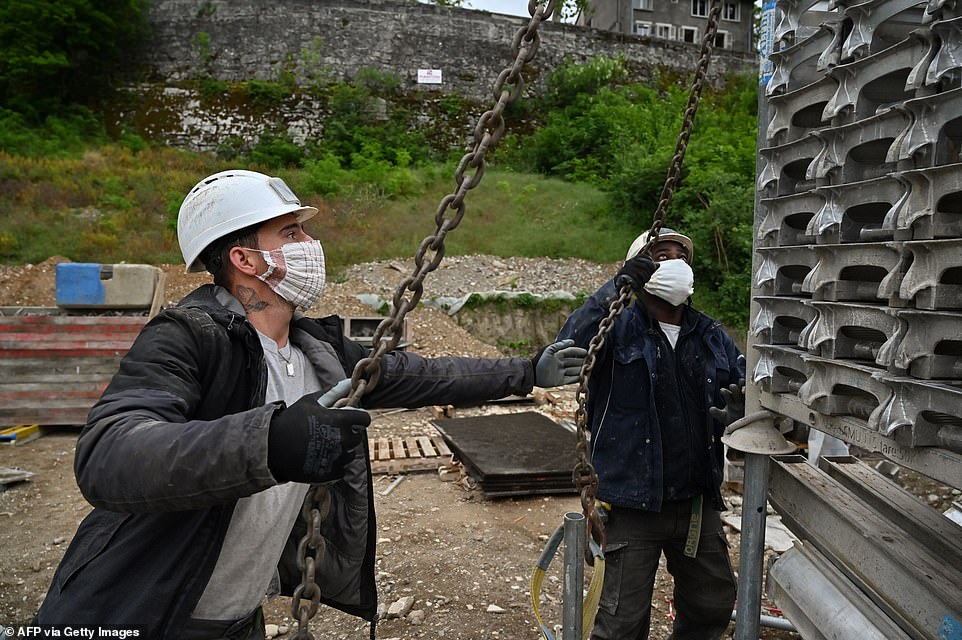 While construction work has been allowed to resume, France will ask office staff to continue working from home where possible after May 11 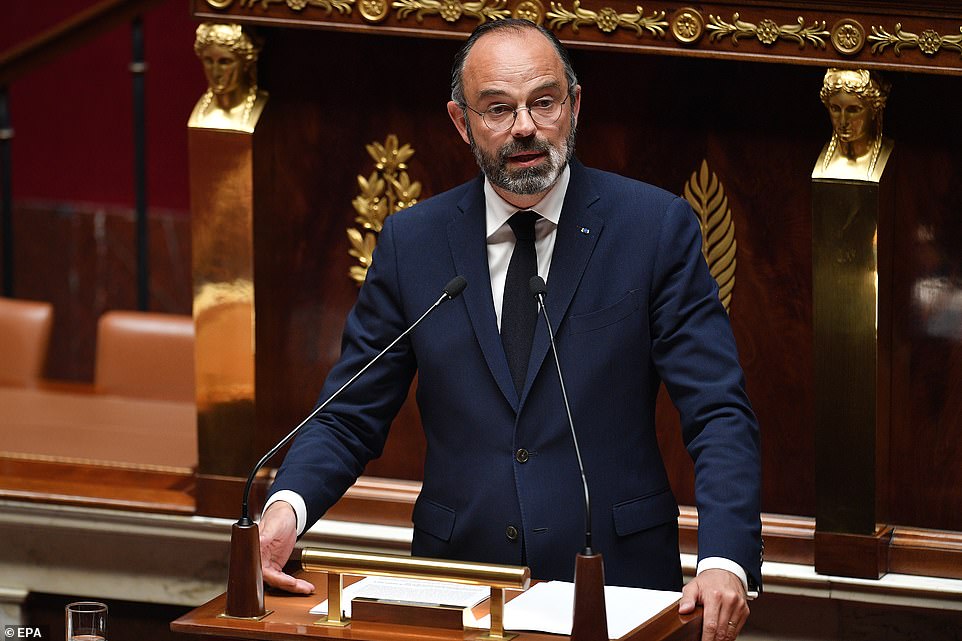 French Prime Minister Edouard Philippe added that restaurants and bars will remain shut after May 11, and that restrictions will only be lifted if daily infection totals remain below 3,000

Joggers in the Italian city of Naples hit the streets on Tuesday as strict coronavirus lockdown measures began to be relaxed across the country.

Dozens of people were pictured making their way along the Lungomare, the city’s seafront promenade, as the sun came up  – while pizzerias were also allowed to reopen for deliveries.

Meanwhile Luxembourg announced plans to test its entire 600,00 population for the virus in a single month, starting from May 19, which the government said would be essential to easing lockdown measures.

Claude Meisch, the minister for research, told L’Essential that 20,000 tests will be performed every day across 17 stations in the country.

Luxembourg currently performs around 1,000 tests per day, largely on people who have reported symptoms.

The country has so far detected 3,729 cases of coronavirus, with 88 confirmed deaths from the virus.

Since the start of the crisis, Europe has seen some 1.4million cases of coronavirus confirmed on the continent and more than 124,000 people die from the virus.

But the epicentre now appears to be shifting across the Atlantic – with more than 1million people diagnosed in the USA and with the death toll mounting in Brazil.

As a result, European nations are now emerging from lockdown measures which had seen the continent reduced to a virtual standstill throughout March and April. 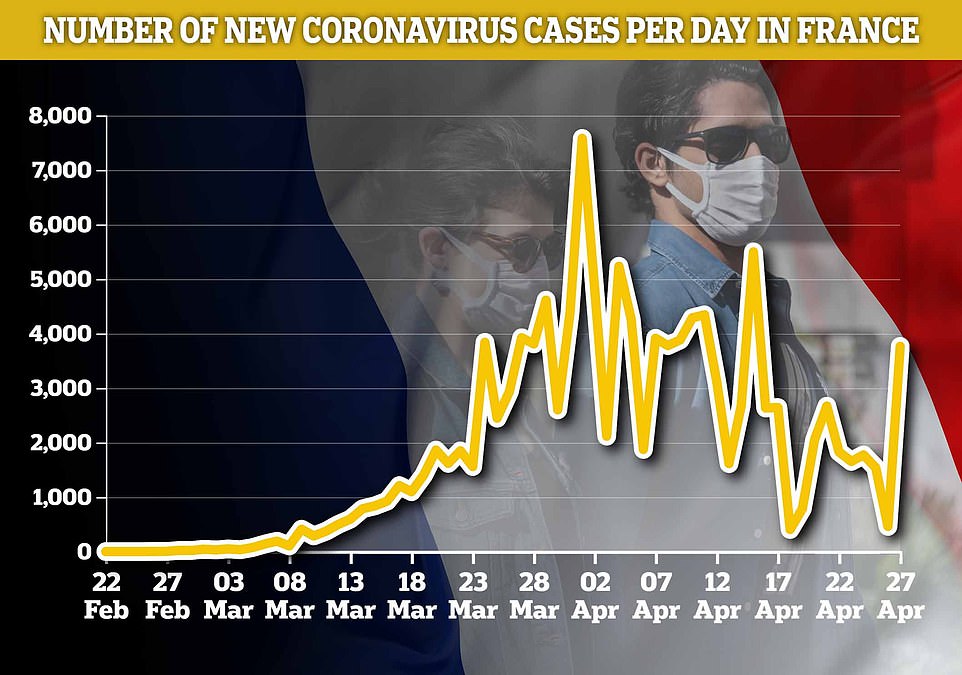 Despite a recent increase in infections, France has seen a general decline in its figures since its peak around the start of the month (daily totals pictured up until April 27) 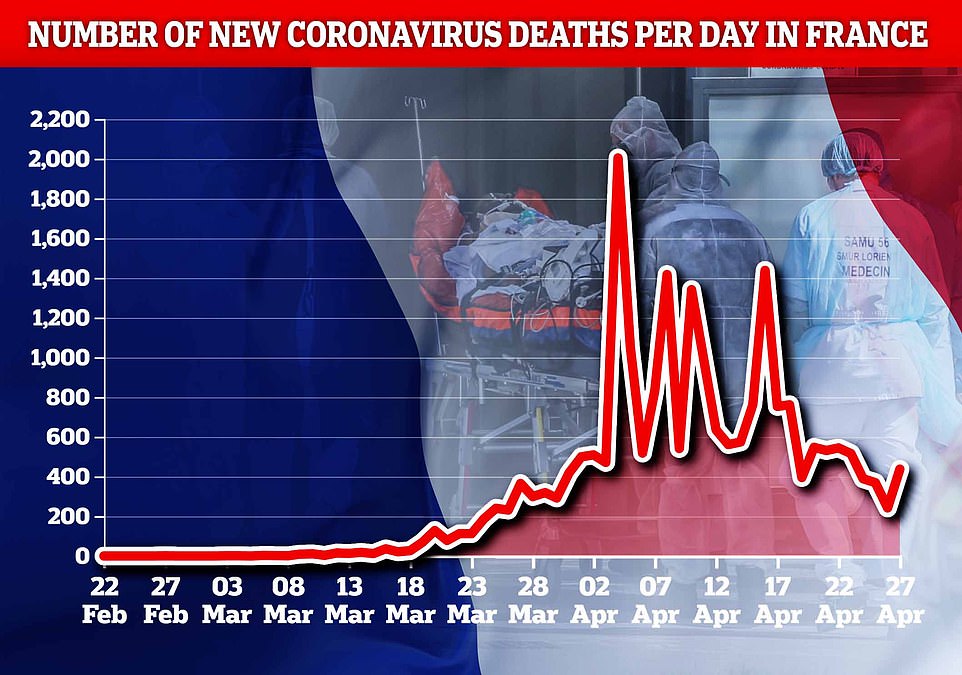 Despite several large peaks, France has seen a general decline in coronavirus deaths since early April (daily totals pictured up until April 27, the most recent date available) 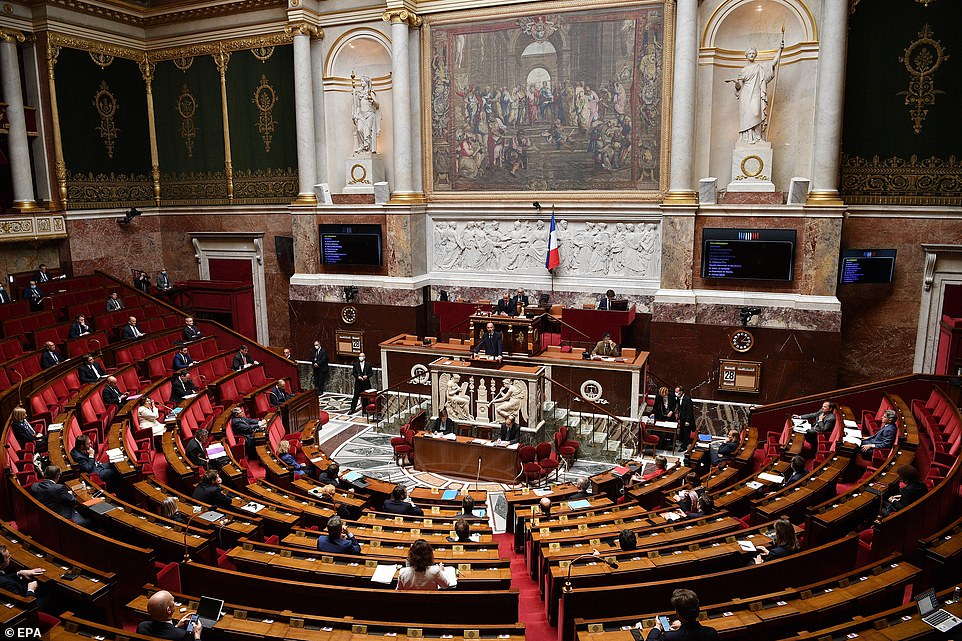 France will begin lifting its coronavirus lockdown from May 11, with markets and other non-essential retailers the first to reopen.

The country will also start to reopen schools from the same date, though only if teachers can guarantee no more than 15 children in each classroom at any one time.

People will no longer require permits to be on the streets from that date, though bars and restaurants will remain closed except for delivery services. 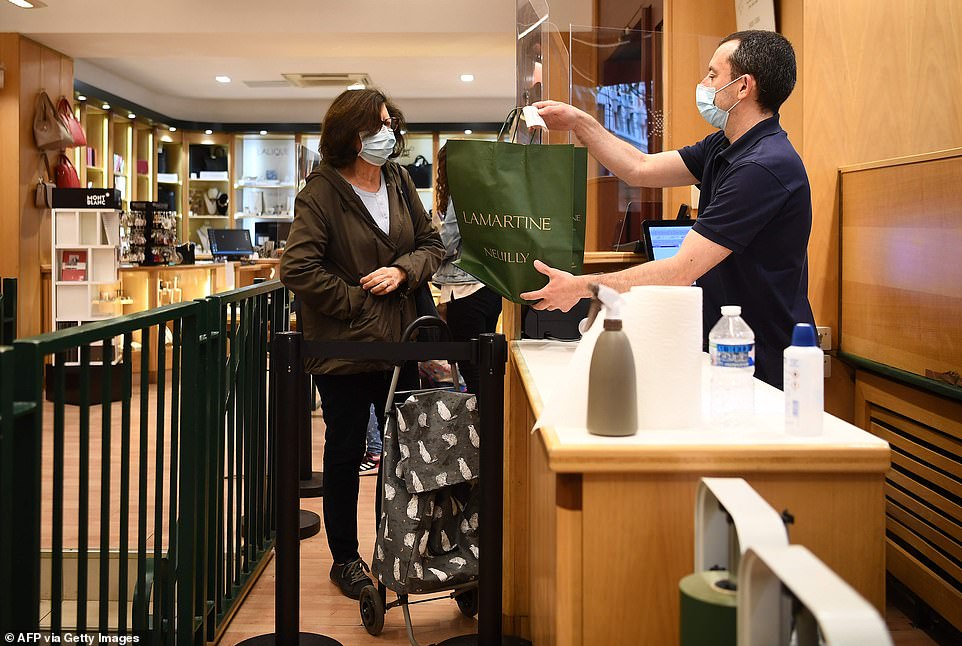 France will outline plans to ease lockdown restrictions on Tuesday, with schools set to return within weeks (pictured, a bookshop in Paris offering a ‘click and collect’ service) 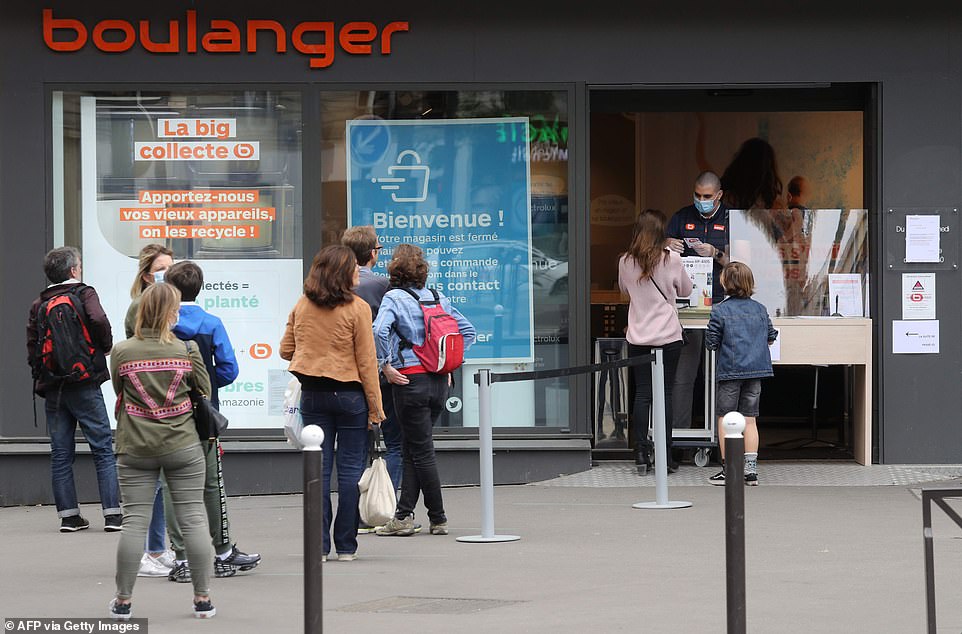 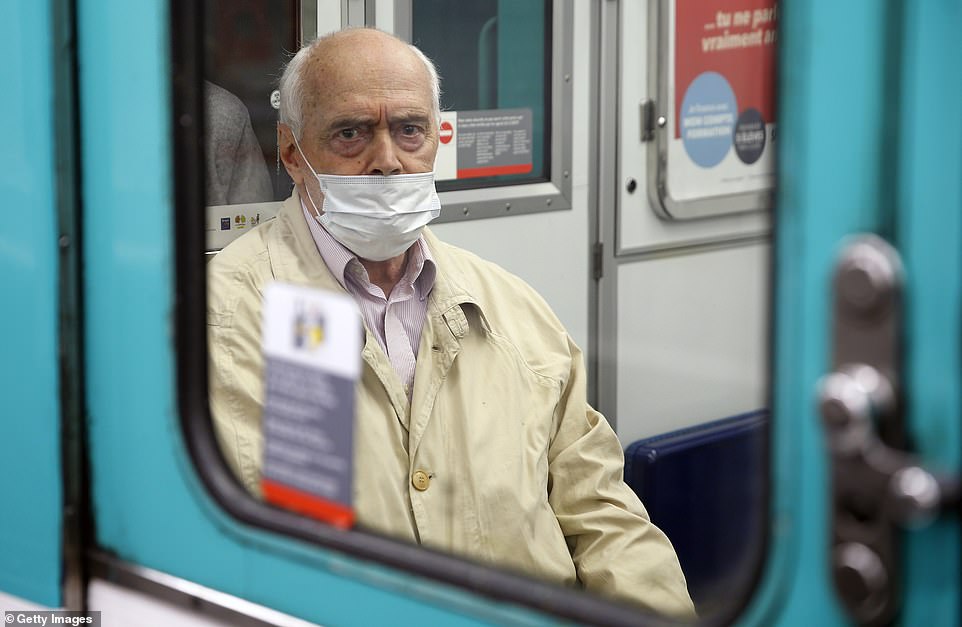 France has said it will increase metro services in anticipation of more people being in public, but will require traveller to adhere to strict social distancing rules

Alongside the easing of lockdown restrictions, Prime Minister Edouard Philippe said a massively increased testing and contact tracing effort will be used to keep people safe.

He said the aim would be to test 700,000 people per week, with the government working to track down and trace anyone who has come into contact with a person who tests positive for the disease.

Masks will also be made available to everyone from May 11 with businesses allowed to insist that visitor wear one before coming into the store, though there will be no general requirement to wear one in public.

He called on all companies to provide workers with masks and will help small firms obtain them if needed.

Masks will also be for sale on the post office’s website and five million will be made each week to the most vulnerable people, he said.

Mr Philippe added that, should the daily infection total rise over 3,000 people, then the lockdown will remain in place. Since April 15, France has averaged 2,162 new cases per day.

Conte announced Monday that people will now be allowed to move around their home regions – though not between regions – while distance limits on exercise will also be eased. 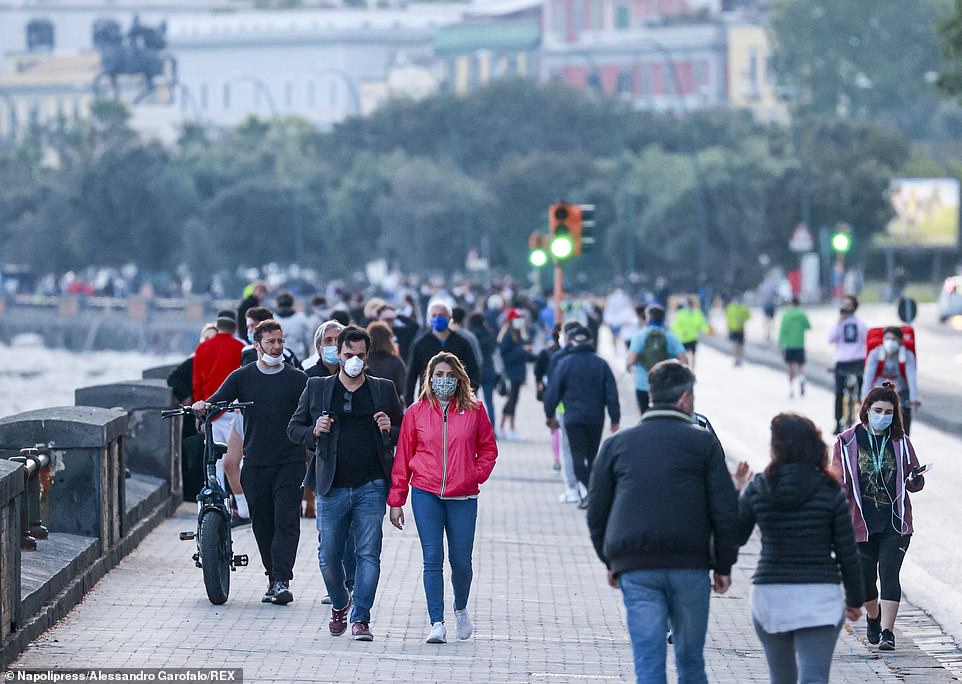 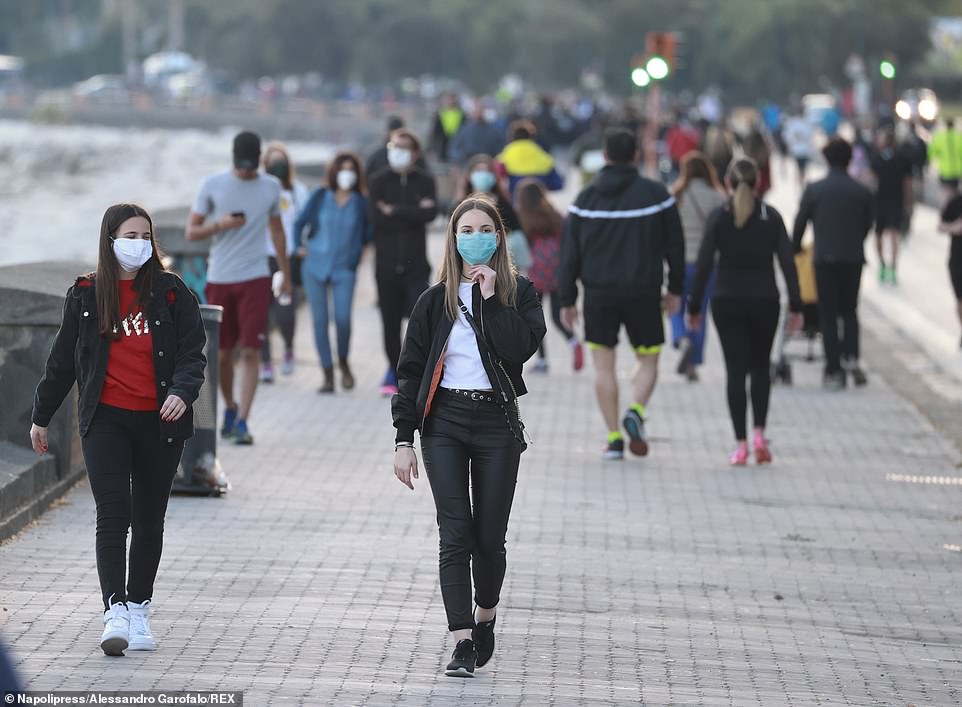 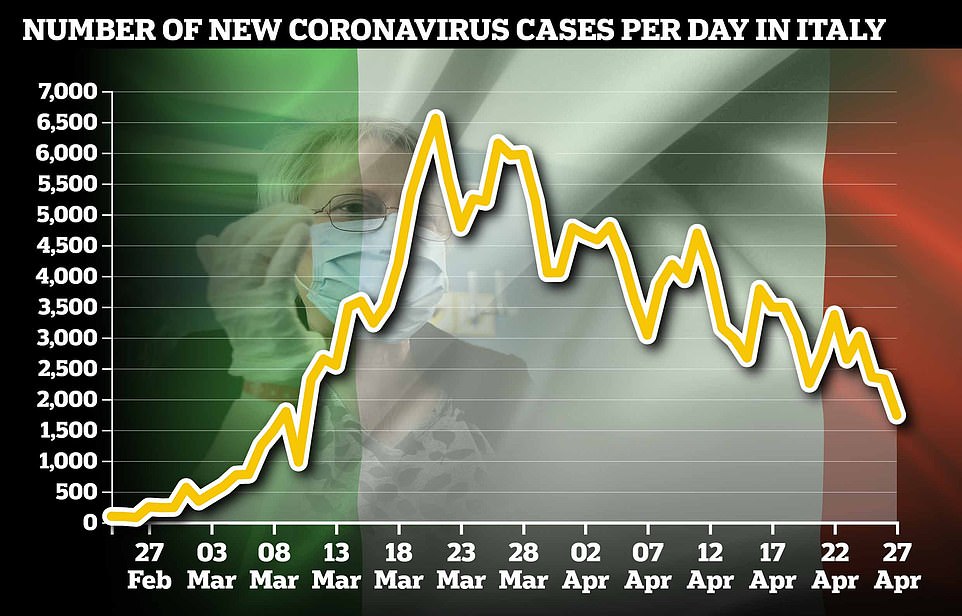 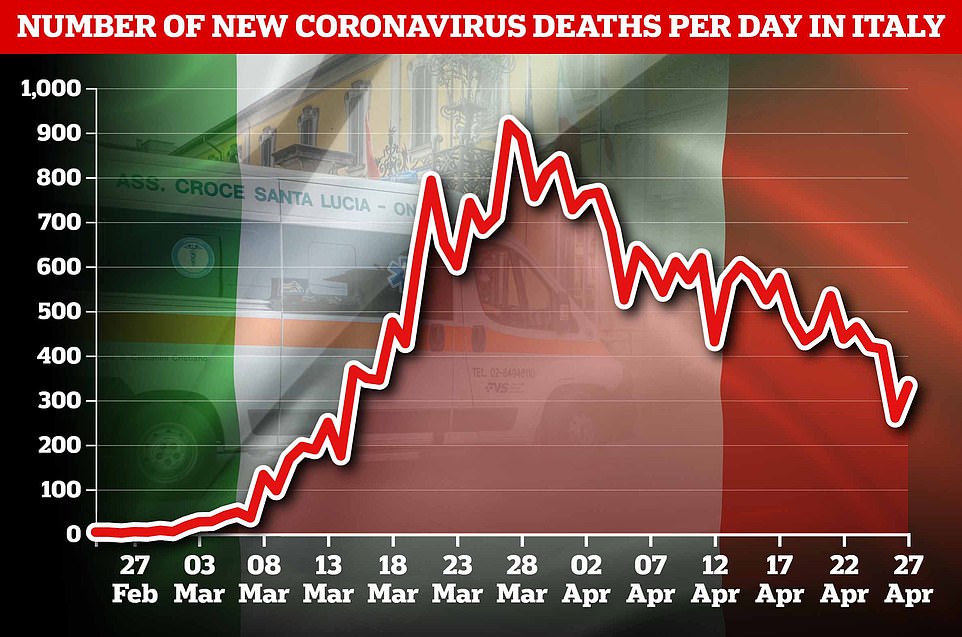 Italy’s daily death totals have also been in steady decline since late March (daily totals plotted up until April 27, the most-recent date available) 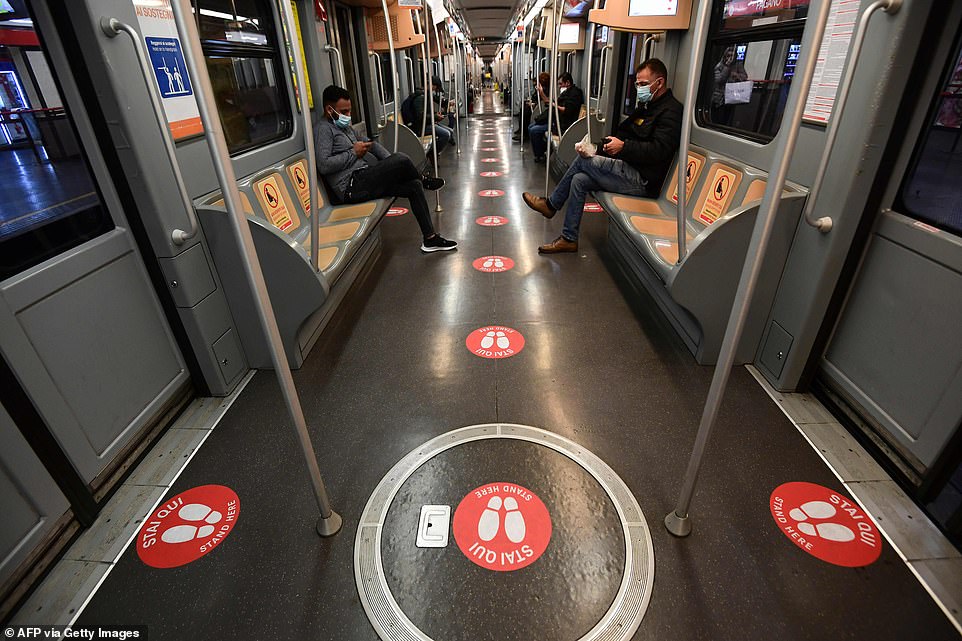 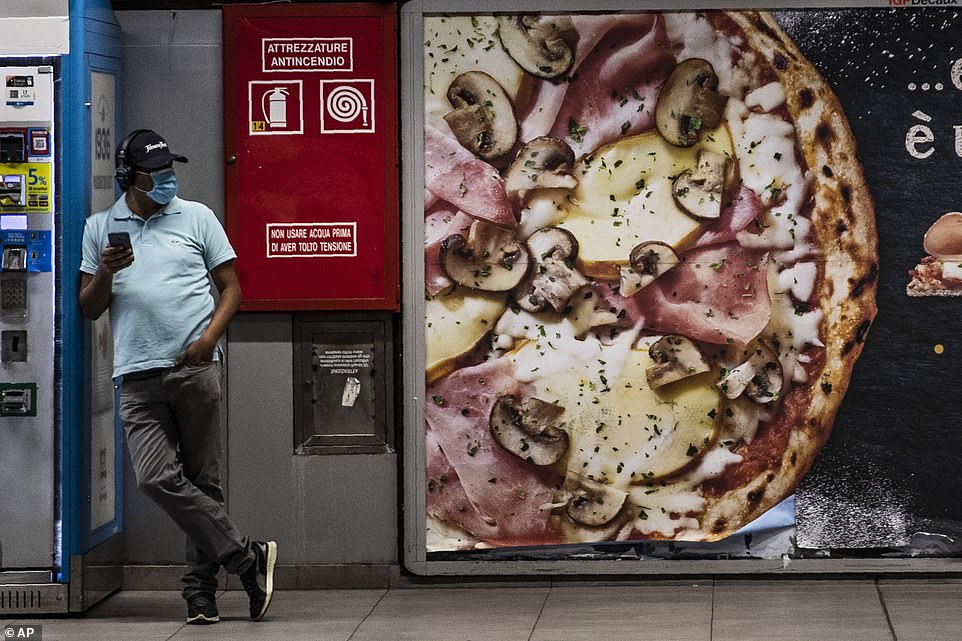 A man waits for a subway train in Milan, previously at the centre of Italy’s outbreak, after lockdown measures began to ease 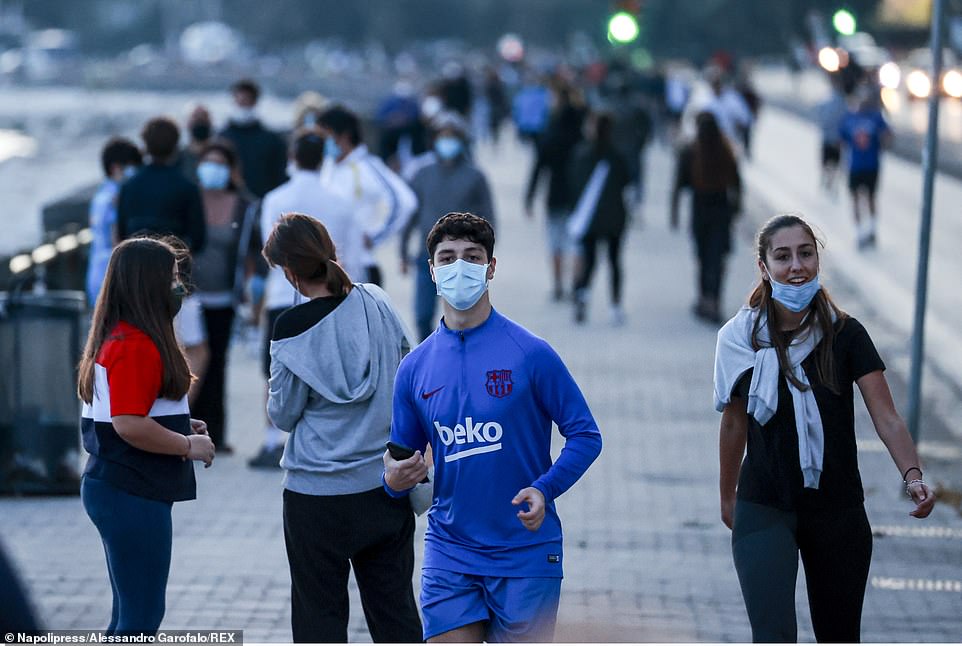 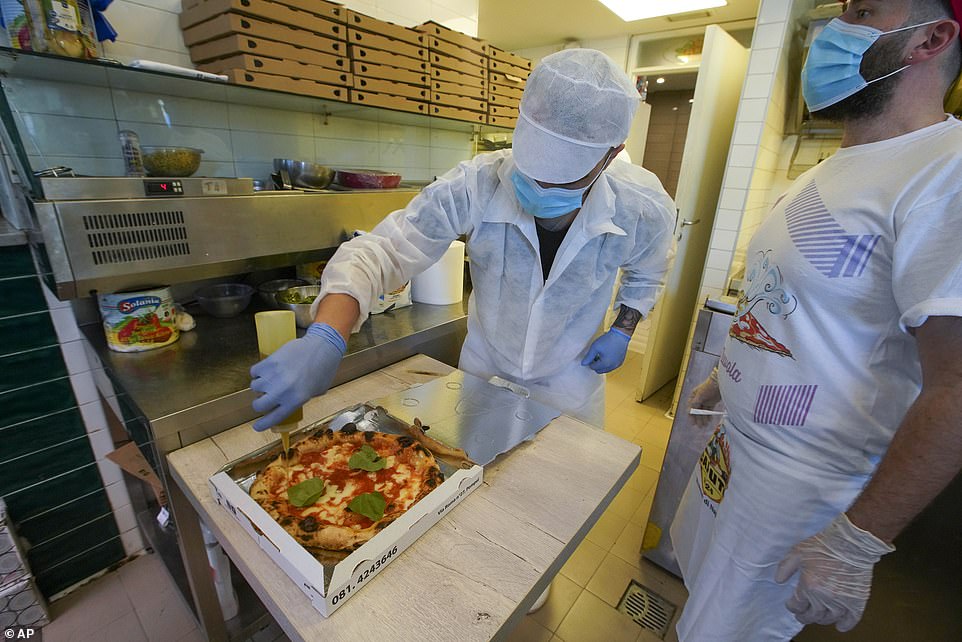 Italy has already allowed restaurants to reopen for delivery, with plans to allow takeout services to resume on May 4 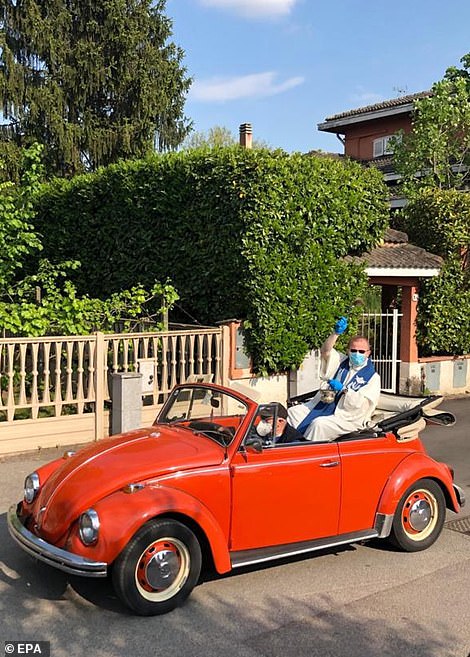 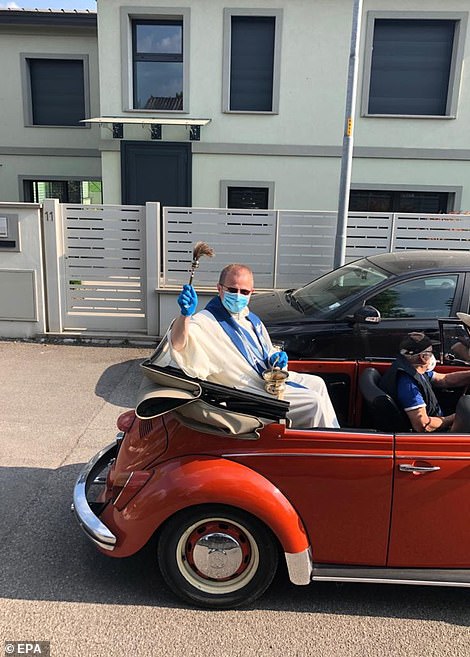 Parish priest Lorenzo Roncali rode in the back of a classic VW car as he sprinkled holy water on the entrances to homes in the city of Crema, in northern Italy, on Tuesday

Spain’s Prime Minister Pedro Sanchez is also expected to outline his plans for ending the lockdown Tuesday, after presenting them to his Cabinet who will vote on whether to approve them.

While the outline of the plans remains vague, health minister Salvador Illa has previously suggested a ‘staggered’ return to daily life – with different age groups allowed out at different times of day. 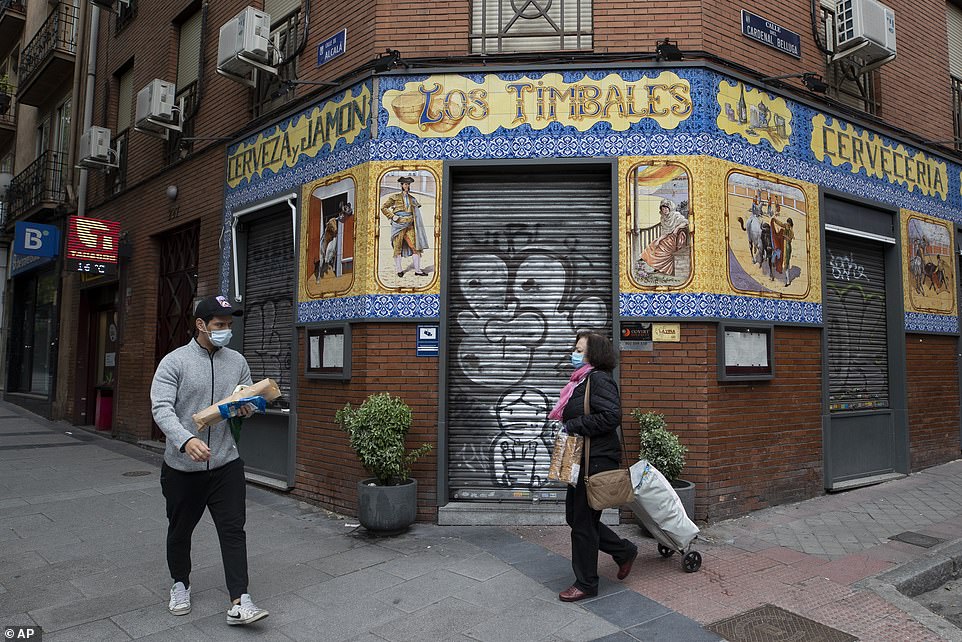 Spain is due to outline plans to end its lockdown today, including when bars (pictured in Madrid) and restaurants might be able to reopen 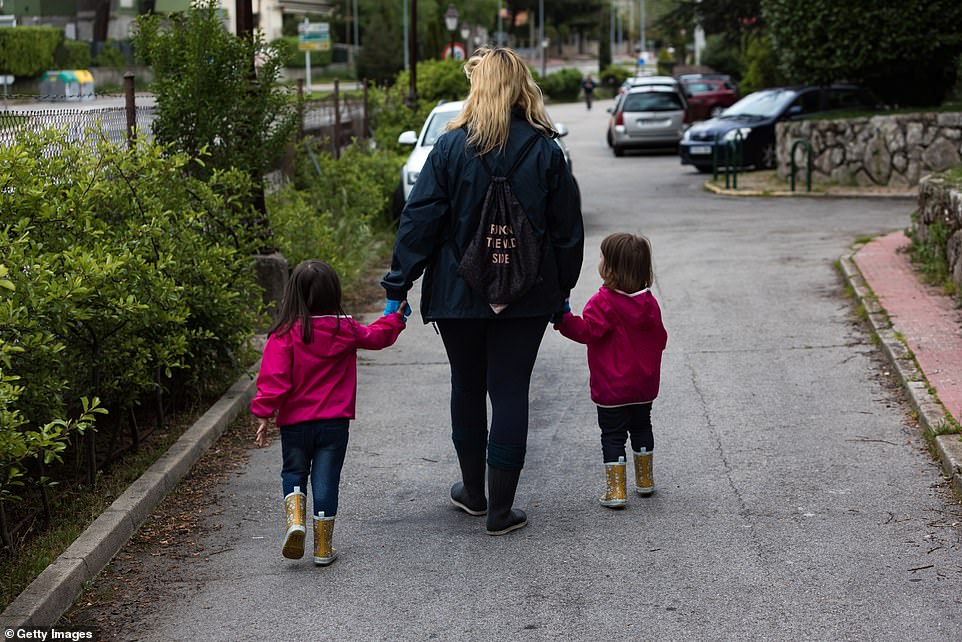 It comes after Spain allowed children to go outside the home this week for short walks, after previously banning them from leaving the house for any reason

The announcement comes in the heels of a new order that is allowing children to take supervised strolls around their house for one hour per day.

They had previously not been allowed outside for any reason.

Spain has also allowed some manufacturing and construction workers to return to their jobs.

Officials have made a public call to be responsible and avoid crowds after people were seen in promenades and beach fronts closer than experts recommend. 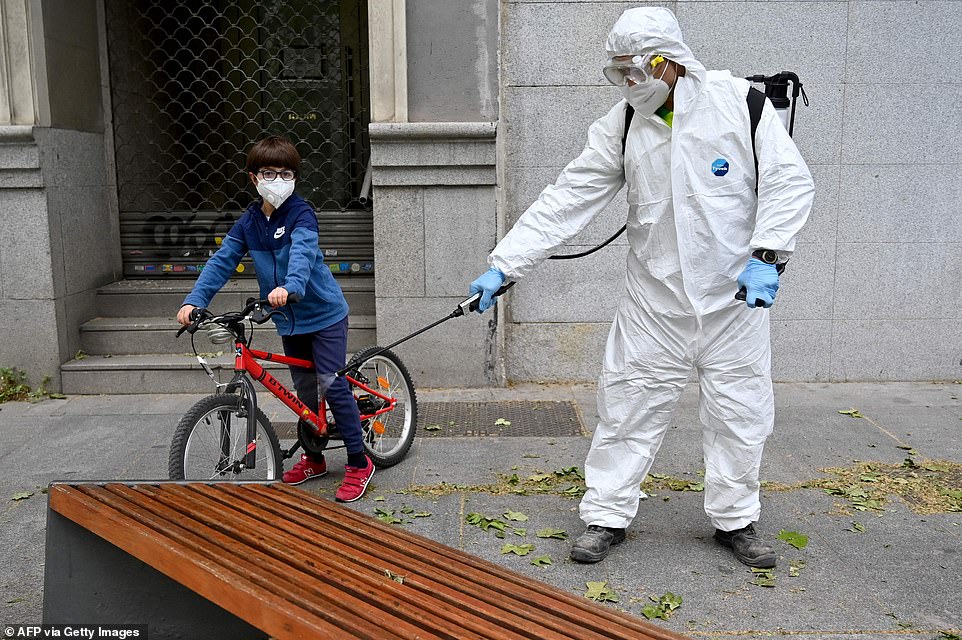 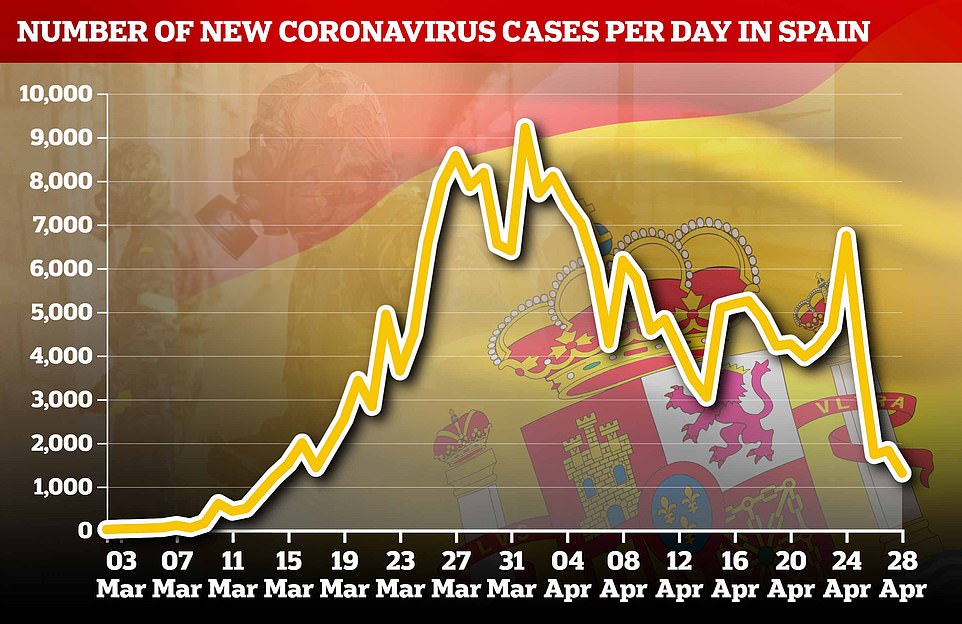 Despite a recent peak Spain has seen its daily infection totals in steady decline since the beginning of April, with 1,308 cases reported on April 28 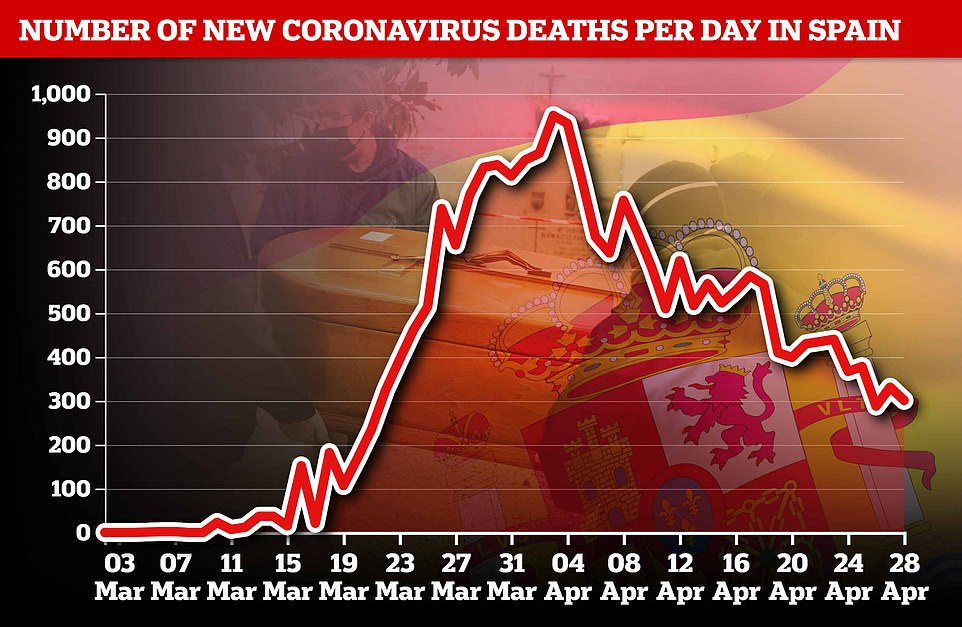 Spain has also seen a steady decline in the number of deaths from coronavirus, with 301 new fatalities logged on April 28

Austria will take further steps to ease its lockdown on Friday, allowing events with up to 10 people and instructing the public they no longer need a specific reason to leave home, the government said on Tuesday.

Austria acted early in its coronavirus outbreak to close restaurants, bars, schools, non-essential shops and other gathering places six weeks ago. DIY stores, garden centres and smaller shops reopened two weeks ago – bigger shops and hairdressers will follow from May 1. 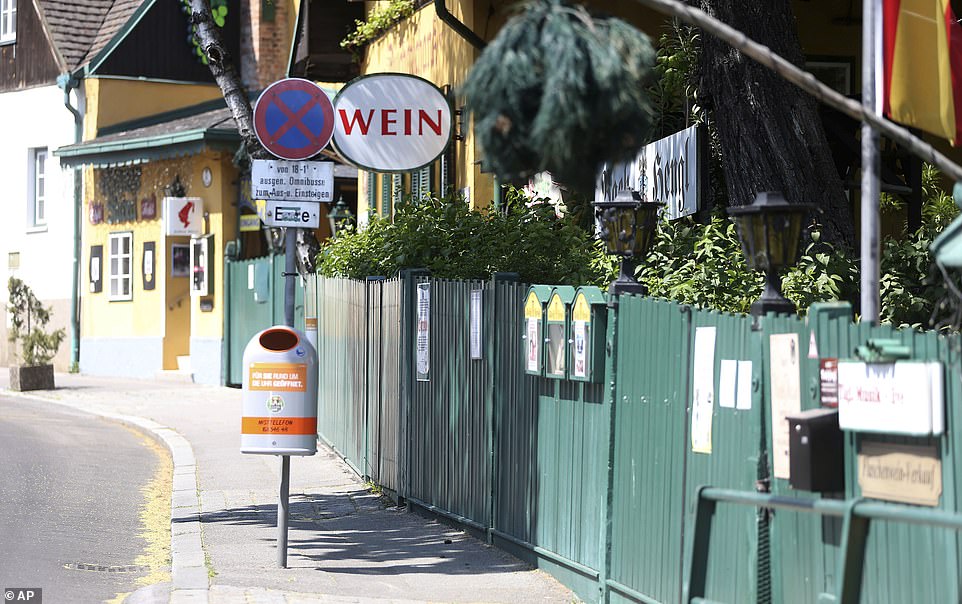 The public has repeatedly been told to stay at home, though that was largely advice rather than a legal requirement.

The recommendation from Friday will be to follow existing social distancing rules like staying 1 metre apart, though working from home is still encouraged, Health Minister Rudolf Anschober and Interior Minister Karl Nehammer said.

‘This is from my point of view a very big change and a very big step, in which we are betting on trust,’ Anschober said. ‘It is now … up to each of us not to be reckless but to conscientiously keep fully implementing these measures.’

Hungary’s government plans to ease the lockdown that has kept the country’s businesses shut and residents mostly at home since mid-March, according to the pro-government newspaper Magyar Nemzet, which published the outlines of the plans on Tuesday.

Hungary has restricted public gatherings and shut down businesses during the novel coronavirus pandemic, like most other countries. It has avoided the massive toll in Italy and Spain, with 2,649 cases as of early Tuesday and 291 deaths in a population of 10 million people. 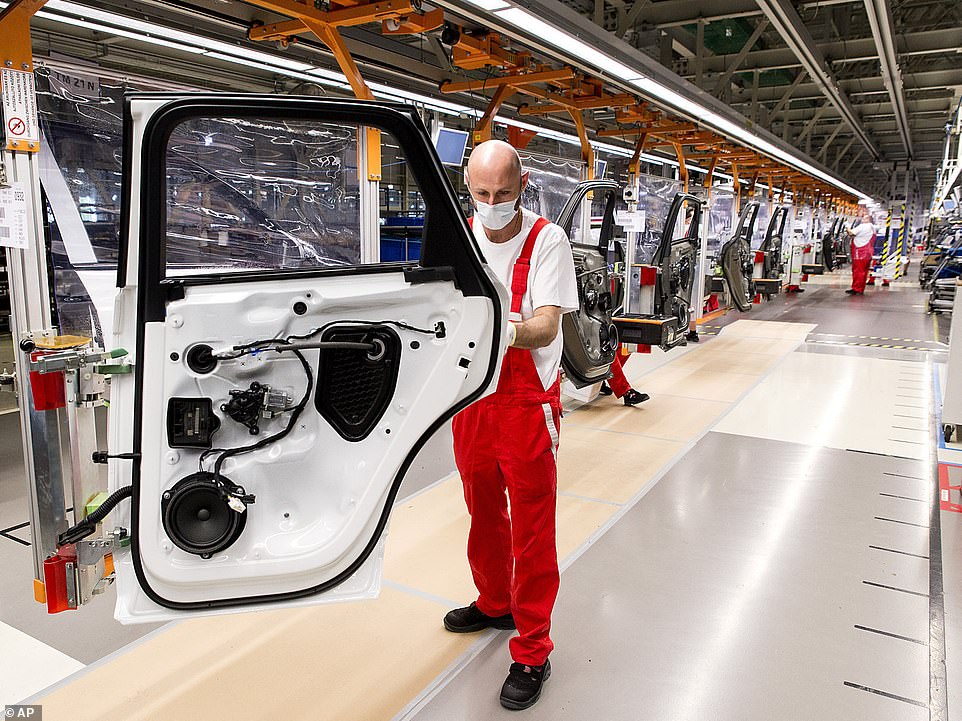 A worker at an Audi factory wears a mask after being allowed to restart work in Gyor, Hungary

Consequently, it has built up a supply of protective gear and hospital technology like respirators. With the healthcare system prepared for an increase in the number of cases, a gradual opening is now possible, Prime Minister Viktor Orban said.

The loosening will begin early next month, Orban said on Friday, adding that he expected the economy to recover rapidly from the effects of the pandemic.

Portugal has announced it will end its coronavirus state of emergency, under which non-essential businesses were shuttered, from May 3.

The country will then enter ‘phase two’ of its response, President Marcelo Rebelo de Sousa announced Tuesday, without outlining exactly what that will entail. 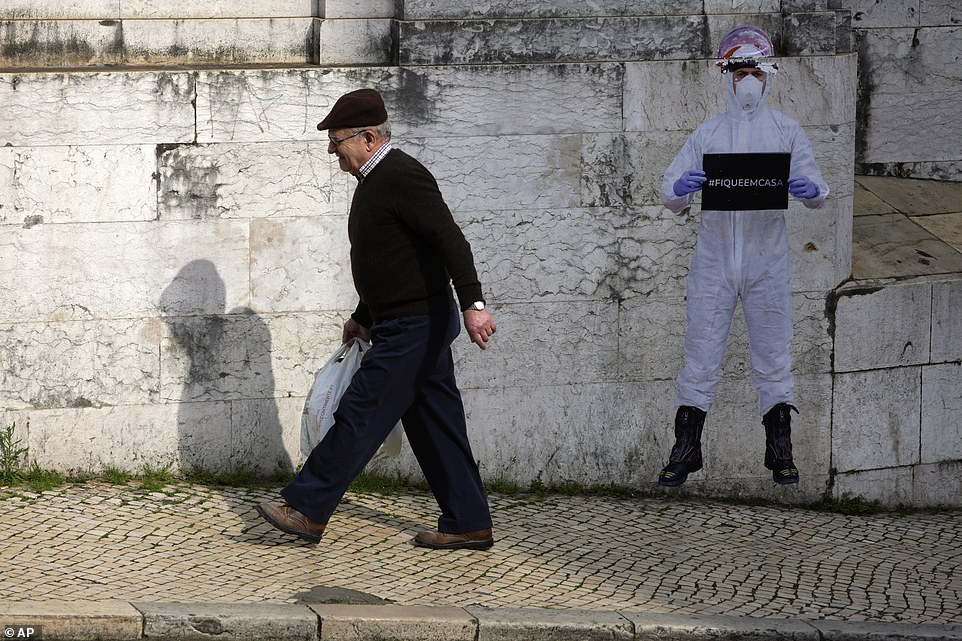 However, he cautioned that the economy will be restarted gradually and measures will not be lifted all at once.

‘What matters in this new phase is that the Portuguese know that containment remains important so we must take small steps and constantly evaluate,’ he said.

Portugal has recorded 24,322 coronavirus cases and 948 deaths since the start of its outbreak.