Où est New York? French national broadcaster is mocked for marking the city in FLORIDA in map shown during US election coverage

A French national broadcaster was ridiculed after it put New York City in the wrong place on a US map during its live election coverage.

The place marker for New York City was placed on the Gulf Coast, in what appears to be western Florida, close to the Alabama border, rather than in the Northeast.

The blunder, which took place during France 2’s news broadcast on Sunday night, was spotted by viewers, who were quick to take to Twitter to point it out.

An awkward gaffe was spotted during the news broadcast of France’s publicly owned channel France 2 during its election coverage. The programme showed a map erroneously locating New York City in Florida (pictured) 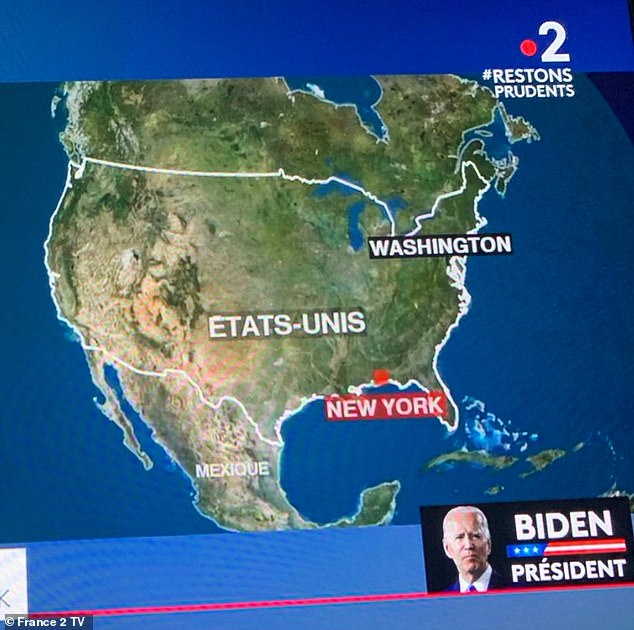 The map was used to indicate the location of a US-based correspondent Maryse Burgot who was speaking to respected French newsreader Laurent Delahousse.

Burgot was describing the city’s reaction to Joe Biden’s win over President Trump.

At one point the map filled the majority of the screen, with only the cities of Washington D.C. and New York marked up.

However the tab for New York City appeared on the Gulf Coast, around the Florida-Alabama border, although the exact location is difficult to determine.

The error was recognised by the team and Delahousse quickly apologised for the mistake, saying: ‘A small geographical correction, because one of our maps wrongly located the city of New York. Our apologies for this mistake moments ago.’

But the error had already been picked up by viewers, who took to Twitter to share screengrabs of the map. 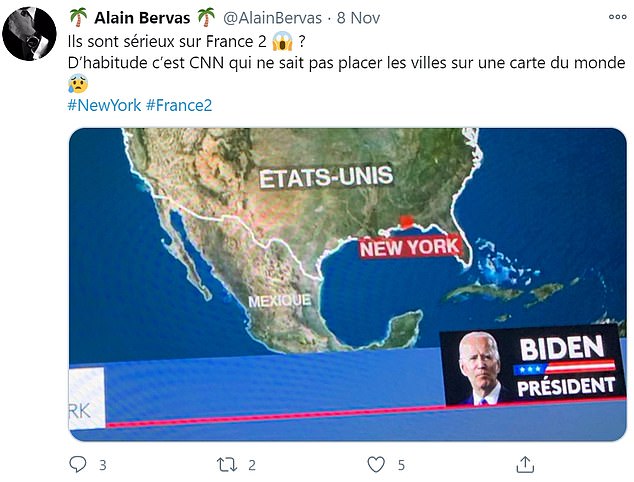 French viewers were quick to notice the mistake, which happened live on air, and mocked France 2 for their blunder

One posted: ‘The intern should have stayed awake during geography classes.

‘Is it me, or did the France 2 broadcast just put New York in Florida,’ asked another.

‘Ahah, I was sure I’d seen this on the map earlier. They’re tired at France 2. We tease them here, but in the US, no one would have seen it,’ joked one.

‘Are they serious at France 2? Usually it’s CNN that doesn’t know where to put cities on a world map,’ lamented another.