‘I don’t think I’ve been involved in a game like that’: Frank Lampard heaps praise on his senior Chelsea stars for their character in chaotic Ajax draw

Frank Lampard praised the leadership of his senior players after Chelsea dragged themselves back from 4-1 down to draw 4-4 with Ajax in an extraordinary clash that the Chelsea manager said was among the craziest nights in his long Chelsea career.

‘I have had some mad nights and some great nights,’ Lampard said afterwards. ‘I don’t think I’ve been involved in a game like that.’

Chelsea’s youngsters have stolen the headlines this season but at Stamford Bridge Jorginho scored two penalties and Cesar Azpilicueta also netted as Chelsea secured a vital point in the race for the knockout stages.

‘For a performance like today you need characters and personalities. At 3-1 down at half time, it’s easy to turn it in,’ Lampard said.

‘Even easier at 4-1 and give it up. But we never did. I keep saying it about the experienced players, the Jorginhos, cool head, driving the team, (Mateo) Kovacic, Willian sure but (Cesar) Azpilicueta, those players really pushed tonight and I loved it.’

Own goals from Abraham and Kepa Arrizabalaga – as well as a header from Quincy Promes put Ajax 3-1 up at half time, before Donny van de Beek netted the visitors’ fourth. 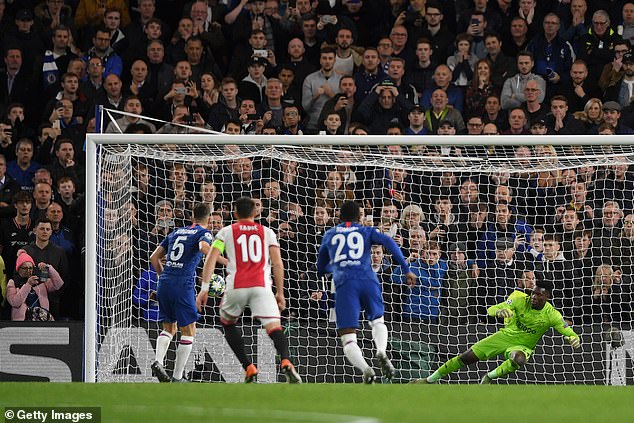 But after Azpilicueta added to Jorginho’s early penalty, the game turned on quickfire red cards to Ajax pair Daley Blind and Joel Veltman.

Jorginho and teenager Reece James then rescued a point, with Ajax boss Erik ten Hag left angry with the officials.

‘We deserved certainly four points,’ he said of the two games with Chelsea. ‘But some decisions… were against us, and we have only one point.’