Frank Skinner surveys his trashed hotel room, shifting some debris with the toe of his cowboy boot. The comedian is made up as the country-music legend Johnny Cash, complete with wig, prosthetic nose, bootlace tie and clothes of the darkest hue.

He is filming Johnny Cash And The Ostrich – an episode of Sky Arts’ new Urban Myths series, fictionalised accounts of mostly true events – in which he stars.

The Midlands comic also wrote this abstract account of the iconic singer’s lost years. The action is set in a mid-budget British hotel during the winter of 1983. Cash, high on red wine and painkillers, is experiencing hallucinations and reliving the traumatic time he was savaged by an ostrich he kept on his Tennessee farm.

Frank Skinner is filming Johnny Cash And The Ostrich – an episode of Sky Arts’ new Urban Myths series, fictionalised accounts of mostly true events – in which he stars 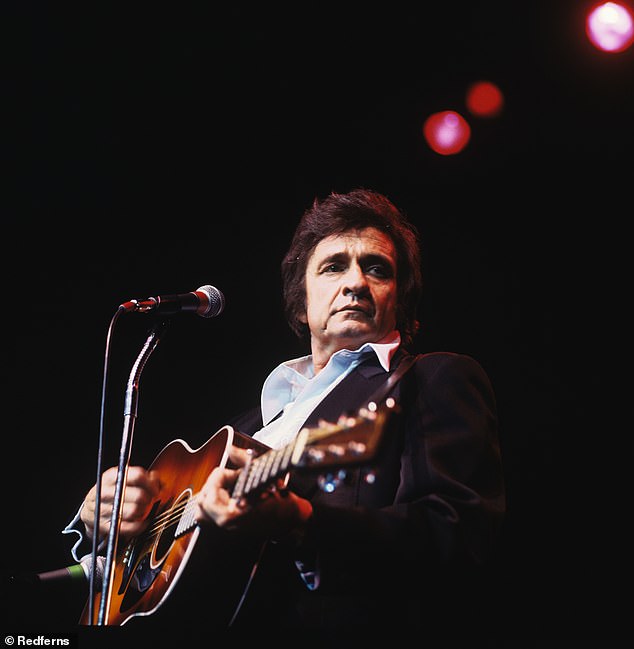 ‘I’ve welded together two incidents from Cash’s life,’ Skinner explains of the comedy drama. ‘The first was in 1981, when he was attacked by his own ostrich – the resulting injury from that got him addicted to painkillers.

‘Two years later he was on a UK tour and he trashed a room in Nottingham. He punched the wall so much he damaged his hands and had to go to hospital. He still played the gig the next night,’ says Skinner, lost in admiration. ‘What a guy!’

Two months later, filming complete, Skinner, 61, is parked on a bench near his home in Hampstead, London, which he shares with his talent-agent partner Cath Mason and their five-year-old son, Buzz Cody. 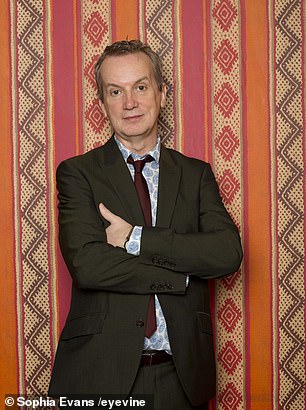 For a decade until 2005, Skinner’s quick-witted waggishness and sharp journalistic mind made for successful chat shows on both BBC and ITV

Skinner, estimated to be worth £11 million, is a recovering alcoholic and hasn’t drunk since 1986. Exploring Cash’s psyche prompted him to revisit a period in his own life that he regards with horror and amusement. ‘One of the things that kept me going as an alcoholic was the idea of being on the outside of society,’ he says. ‘I liked to see myself like that. It made me feel quite excited and interesting.’

For a decade until 2005, Skinner’s quick-witted waggishness and sharp journalistic mind made for successful chat shows on both BBC and ITV, and he’s proved popular as the presenter of BBC1’s Room 101. But he adds playwright to his CV next, having completed work on his first stage play, which will open at the Edinburgh Fringe in August. ‘Don’t worry, there’s loads of one-liners in it,’ he insists, amid concerns that he’s ‘gone all Ibsen’.

The Urban Myths series will also feature a re-imagining of the Sex Pistols’ infamous encounter with Bill Grundy on the Today show in 1976. This reminds Skinner of a curious night at the opera. ‘I bumped into the Sex Pistols’ drummer, Paul Cook, at La Traviata,’ he laughs. ‘I was a big fan of the Pistols, but never in my wildest dreams did I imagine I’d be chatting to one of them at the opera. And I’ve had some fairly wild dreams.’

‘Urban Myths’ is on Sky Arts, Thursday at 9pm. The full series is also available on demand