Frankincense may become a key part in treatment of arthritis

Frankincense may become an important treatment for arthritis.

That’s according to researchers from the University of Alabama, who believe the biblical resin – which is extracted from Africa’s boswellia trees – can halt inflammation.

Data suggests it works by attaching or ‘docking’ onto proteins that cause pain and effectively blocking them.

The finding could help pharmaceutical companies develop new drugs to combat the condition, which affects more than 10 million people in the UK.

Age-old: Frankincense is a common type of essential oil and has long been used as an alternative treatment for wounds and skin infections

Professor Will Setzer, who led the study which was published in the journal Medicines, said: ‘We have identified some important inflammation-related molecular targets in humans that boswellia compounds can block.

‘It’s not clear why the trees make these compounds – it’s probably to protect themselves from insect or fungal attack. It obviously works because the trees are still there.

‘The biggest problem is making modifications to these natural compounds to make them more effective and bio-available for humans.

‘Boswellia is not water soluble so it’s difficult to get it into the bloodstream.’

Cambridge Nutraceuticals, a biotech company, has now developed a new boswellia product called Cool Joints+ which they believe overcomes this problem by using a patented process that combines boswellia with soy lethicin. 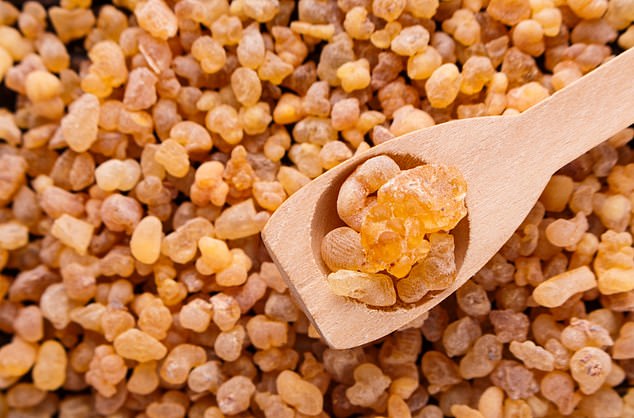 Arthritis is a common condition that causes pain and inflammation in a joint.

In the UK, more than 10 million people have arthritis or other, similar conditions that affect the joints.

The two most common versions of it are osteoarthritis and rheumatoid.

In the UK, rheumatoid arthritis affects more than 400,000 people. It often starts when a person is between 40 and 50 years old. Women are 3 times more likely to be affected than men.

Dr Miriam Ferrer, a molecular biologist from Cambridge Nutraceuticals, said: ‘The lethicin enhances the active ingredients of boswellia in the stomach so it reaches optimal levels both in the plasma and the tissues.

‘We have shown that this component allows the boswellia to get to where it needs to go to produce the anti-inflammatory effect, and at the right amounts, which is very exciting.

‘More studies are ongoing, but we are very pleased with the results we have achieved so far.’

Other specialists are similarly positive about the prospects for new boswellia-based medications.

Ali Mobasheri, professor of musculo-skeletal physiology at Surrey University, said: ‘Boswellia does block the release of proteins that worsen joint deterioration in osteoarthritis.

‘Its different mechanism of action may be effective whether other conventional treatments such as paracetamol, seem not to work.’

Four years ago an analysis of 49 studies of herbal treatments for osteoarthritis involving almost 6,000 people, also concluded the ancient remedy of frankincense was one of the ones that worked.

The analysis by the respected Cochrane organisation, a global scientific network that reviews health research, said there was ‘moderate-quality evidence for trends of [boswellia] benefits that warrant further investigation.’

It said the risk of side effects from boswellia was low.