Franklin Graham, the evangelical pastor whose group Samaritan’s Purse is running a field hospital in New York’s Central Park, says he is being harassed for insisting his hospital workers are opposed to gay marriage.

Mr Graham – who has a long history of anti-LGBTQ beliefs – makes all volunteers agree to a Statement of Faith which includes the line ‘marriage is exclusively the union of one genetic male and one genetic female’.

However, Graham has since posted in a lengthy Facebook message about how he has been harassed by ‘elected officials and others’ in New York.

‘While so many have expressed their appreciation and support, sadly some New York officials and a special interest group have expressed concerns or outright opposition to the presence of Samaritan’s Purse and our field hospital in Central Park. They include: Eight Democratic members of New York’s Congressional delegation in Washington, D.C., The New York City Commission on Human Rights, The Reclaim Pride Coalition,’ Graham alleged. 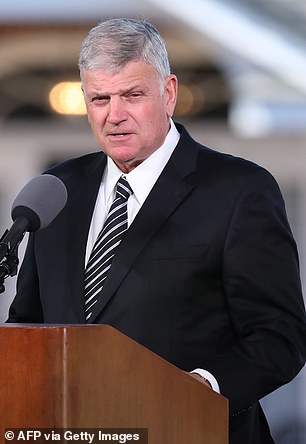 ‘While our Scriptural belief in marriage between a man and a woman seems particularly offensive to representatives of these three groups, we don’t believe this is the time or place to wage this debate. Samaritan’s Purse is a decidedly Christian private relief organization, funded almost entirely by individuals around the world who share our passion for providing aid to victims of war, disease, disaster, poverty, famine and persecution—and doing so in Jesus’ Name,’ the pastor continued.

‘It seems tone-deaf to be attacking our religious conviction about marriage at the very moment thousands of New Yorkers are fighting for their lives and dozens of Samaritan’s Purse workers are placing their lives at risk to provide critical medical care.’

‘If any of these groups had funded and erected their own emergency field hospitals to serve COVID-19 patients in Central Park, we would join what we believe would be most New Yorkers—and Americans—in applauding and praying for them, not harassing them.

Last month, while setting up the temporary structure, in an attempt to allay fears because of the charity’s anti-gay stance, Samaritan’s Purse told state lawmakers that they would require those working at the hospital to sign an additional second pledge vowing not to discriminate against patients according to the New York Times. 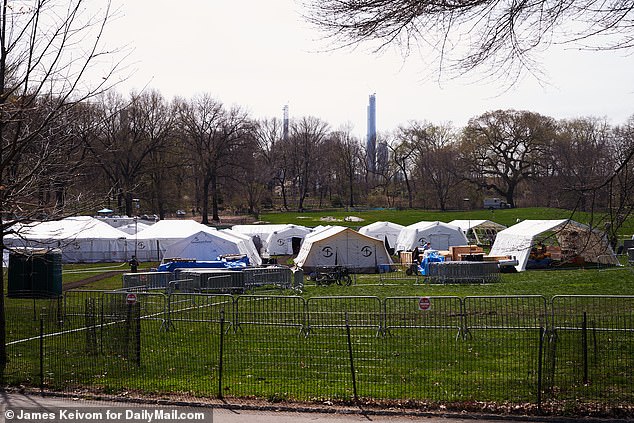 The hospital has treated 119 patients so far. The facility, run by Christian humanitarian group Samaritan’s Purse, has just over 70 medics and can take 10 intensive care patients 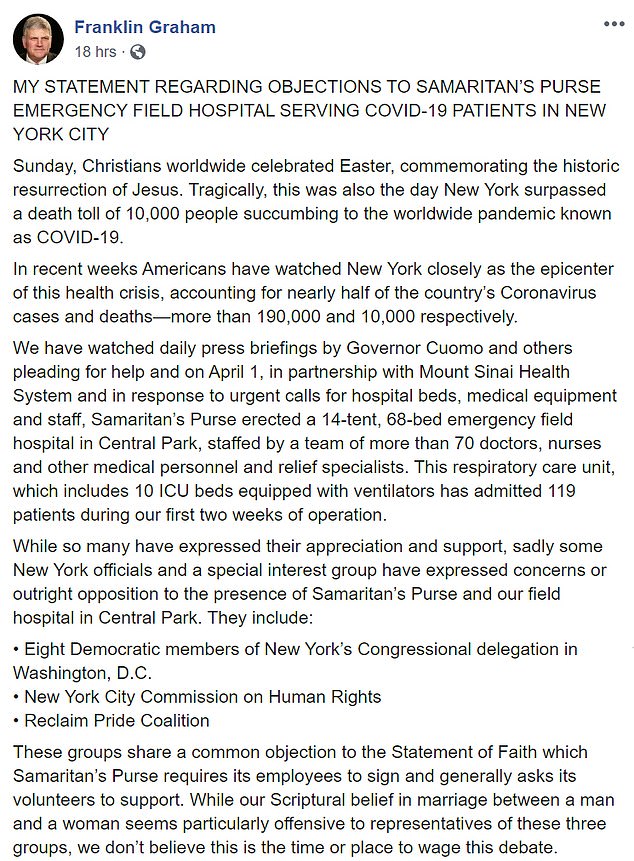 Nonetheless, Graham justified his position by saying the group had a right to ‘lawfully hire staff who share our Christian beliefs’ because it is a religious charity.

The hospital consists of 14 tents with room for 68 beds, staffed by a team of more than 70 doctors, nurses and other medical personnel and relief specialists.

There are also 10 ICU beds equipped with ventilators. The hospital has admitted 119 patients during their first two weeks of operation.

Last week, activist William Talen – best known for his satirical character Reverend Billy – was arrested at the hospital and escorted away by six police officers, one clutching what is believed to be Talen’s rainbow flag.

As he was being escorted away, the 69-year-old shouted: ‘They have no business being in New York City. They are the virus.’

Talen allegedly jumped the perimeter of the hospital and planted a flag on the grounds before he was arrested. 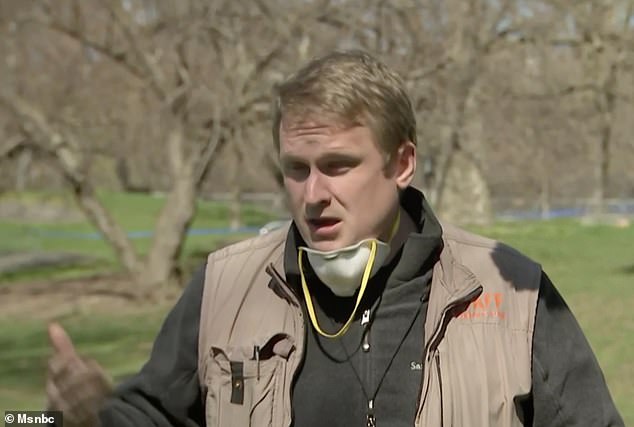 Last month, the makeshift field hospital was constructed in Central Park in just 48 hours to take the pressure off overwhelmed hospitals in the city.

‘In partnership with Mount Sinai, we’re accepting patients and each day a certain number come through and we receive them throughout the day.

He added: ‘The challenge is those two hospitals [Mount Sinai hospitals in Brooklyn and Queens], those two boroughs, are really the ones that have been hit the hardest early on in this pandemic in New York City. 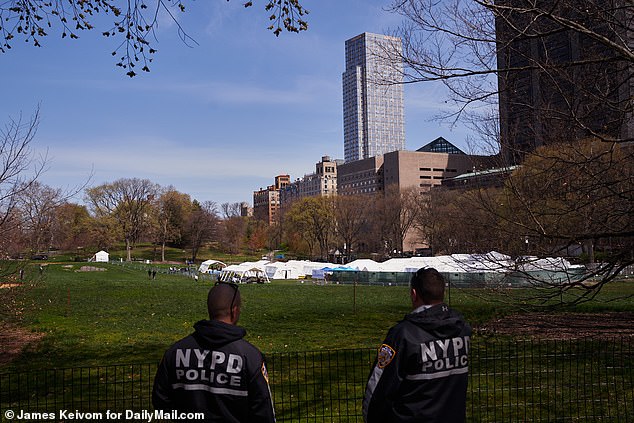 ‘We’ve been able to serve a great function here by offloading them and allowing them to treat more people.

The organization is also running a field hospital in Italy, the first time they have had two facilities open simultaneously.

He added: ‘We’ve only been open three or four days, but if our patients in Italy are any indication they could be here weeks. Two to three weeks even, the sicker patients.’ 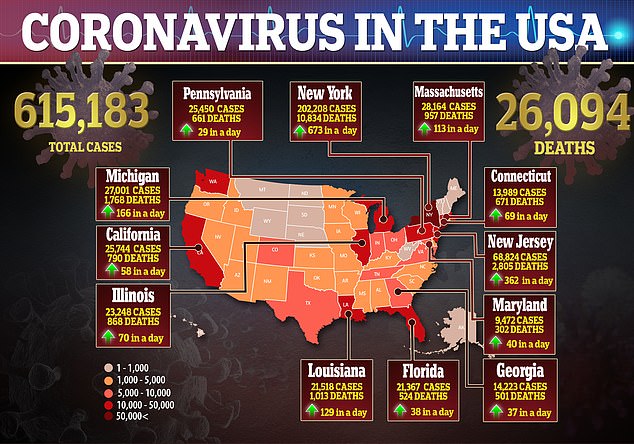 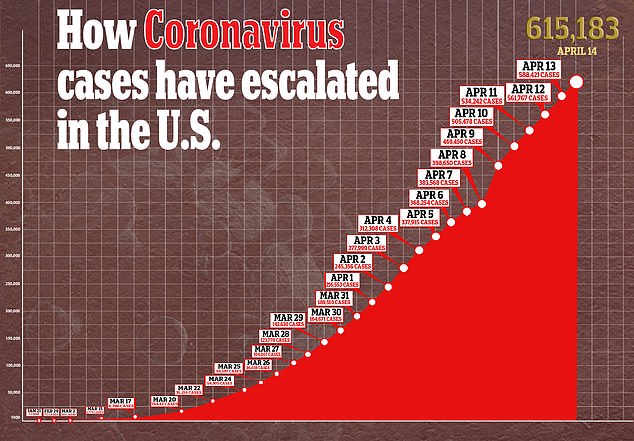