A fraud helpline is misleading victims by suggesting their cases will be investigated even though most are dismissed out of hand, it was reported last night.

An undercover probe found that managers at Action Fraud mocked victims as ‘morons’, ‘screwballs’ and ‘psychos’, while staff are trained to trick callers into thinking they are talking to the police.

Last year an estimated 3.6million online and cold-calling scams were carried out. However, as few as one in 50 fraud reports lead to a suspect being caught.

Of all the 270,000 reports of fraud only 10,000 have been resolved with those responsible being caught

Victims are told to report their cases to Action Fraud, which is overseen by City of London Police. The day-to-day running of its call centre has been outsourced to US firm Concentrix.

A reporter from The Times discovered that many staff are school-leavers who take victims’ reports after just two weeks’ training. Many were filmed sleeping on the job, play-fighting and taking calls while scrolling through their phones.

Managers were recorded saying that the police ‘do absolutely everything in their power to avoid’ investigating fraud cases. Recruits are told to make snap decisions as to whether to file calls as a ‘crime report’ or an ‘information report’. About half are filed as the latter, which are unlikely to be investigated.

If a victim’s bank details are stolen, their cases are only filed as crime reports if their bank refuses to reimburse them. Likewise, a cold call is only filed as a crime report if the victim has lost money or called the company back.

Michael Rodgers, City of London Police training manager, told staff: ‘When somebody phones up we don’t tell them we’re taking a crime or an information report, we just tell them we’re taking a fraud report.’ Even crime reports are then put into a computer scoring system, with only those most likely to lead to a conviction being passed on to the National Fraud Intelligence Bureau (NFIB).

This means victims must provide detailed information such as fraudsters’ names and car registration plates. Of the cases reviewed by the NFIB, which is mainly staffed by ex-police officers, about a third are forwarded to local forces to investigate. Mr Rodgers told staff to ‘never disclose’ the scoring system. 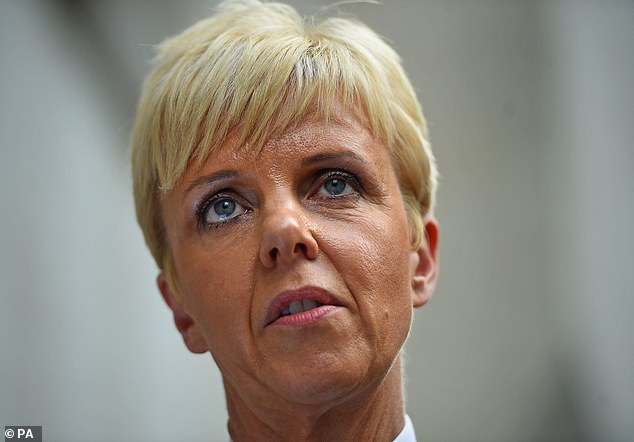 Fraud costs the UK an estimated £190billion a year. More than half a million victims contact Action Fraud every year.

Last year, Action Fraud filed 270,000 crime reports, of which only 10,000 led to a suspect being caught. Home Secretary Priti Patel said she was ‘very concerned’ by the findings and has written to City of London Police asking for an update.

Commander Karen Baxter, national lead for economic crime for the force, said: ‘I am personally leading on the review into the allegations. The incidents do not represent the standards of work and ethics we expect from anyone associated with the City of London Police.

‘It is important to emphasise that we know that the vast majority of the staff who work for Action Fraud do a good job in sometimes difficult circumstances, and we would not want this to deter members of the public from coming forward and reporting fraud.’

Concentrix said its staff were meant to follow the training set by the Home Office and City of London Police. It said it would never support staff sharing misleading information, that it was not its policy to make callers believe they are speaking to police officers, and that mocking victims and ignoring them on calls was not tolerated.

A spokesman said: ‘A number of alleged isolated incidents have been raised which are not a representation of the operating culture of our organisation.

‘We are investigating fully and the individuals in question have been suspended.’