A bizarre snail with green and orange horns has been spotted in Taiwan.

The shelled gastropod was seen crawling across a hillside in Changhua County earlier this month – and stunned a local hiker in the process.

Tourist Lin Ruian said he noticed the snail because it looked like it had ‘flashing lights’ turned on inside it.

In reality, biologists reveal it has been rendered a ‘zombie’ after having its motor neurons and body seized by a parasitic flatworm.

Called the green-banded broodsac, or leucochloridium paradoxum, it commonly uses snails as hosts to spread.

The parasite invades the snail’s eye stalks and creates a bright pulsating pattern in order to imitate a caterpillar.

WHAT IS AGGRESSIVE MIMICRY?

Zoologists have repeatedly compared this strategy to ‘a wolf in sheep’s clothing’ because it allows a parasite to avoid being correctly identified by their host or prey.

Aggressive mimicry often involves the predator employing signals which draw its potential prey towards it, a strategy which allows predators to simply sit and wait for prey to come to them.

Once the host animal is killed and eaten, the parasite multiplies in the predator’s digestive tract – thus completing a life cycle.

The end goal for the parasite is to attract hunting birds and it then forces the snail to go out into the open so birds can spot the snail.

Birds will eat the snail and the parasite can reproduce in the bird’s intestinal tract.

The offspring will then eventually transmitting through its faeces and the cycle repeats.

Technically, this process of imitating another living animals is known as aggressive mimicry.

Leucochloridium paradoxum has existed for some time, but was only confirmed in 2013 by biologist Tomasz Wesołowski of Poland’s Wrocław University.

He proved its existence and its motivation for inhabiting snails. It was also found that the parasite is breed-specific and mainly targets amber snails, aka Succinea.

Psychedelic: Biologists say this amber snail has been rendered a ‘zombie’ after having had its motor neurons and body governed by a parasite flatworm called the green-banded broodsac 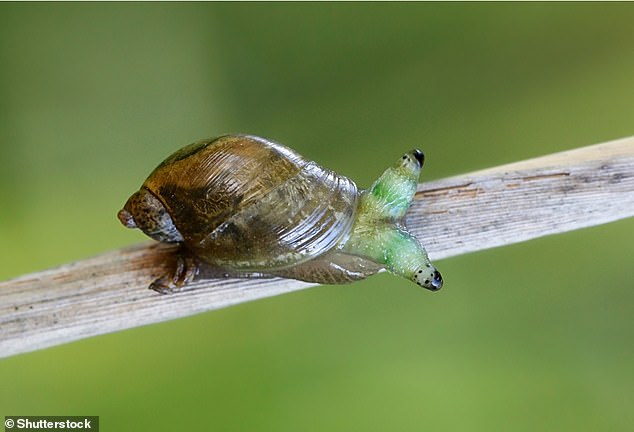 Findings: Leucochloridium paradoxum has existed for some time, but was only confirmed in 2013 by biologist Tomasz Wesołowski of Poland’s Wrocław University

So-called because of their translucent colour, they are most closely connected to water and frequently live near ponds and marshes – places where the parasites are often found.

‘The snail looked like it had multicoloured neon lights inside,’ said Mr Ruian.

‘I don’t know what was causing it but it was very strange. I poked it with a stick and it rolled over.’