The new film on Queen, called Bohemian Rhapsody, will shine a new light on to the little known romance between Freddie Mercury and Mary Austin.

Never-seen-before pictures of Queen on tour in the 1970s and 1980s were released by Brian May this week including one of Freddie sat next to Mary on the band’s private jet.

Mary still lives in the vast West London mansion where Freddie died from an Aids-related illness in 1991.

Queen guitarist Brian May will publish incredible unseen 3-D photographs, taken while on the film set of Bohemian Rhapsody, a year after the original book. Pictured: An unseen photo of John Deacon (rear) and Freddie Mercury (right) on a private jet are just one of the many rare photos included in the book

When the trailer for the long-awaited movie came out, there were allegations it was ‘straightwashing’ Freddie’s life by so often showing him with a young blonde.

But the truth is that his love for Mary was very real although they did split over Freddie’s indiscretions with young men, the pair remained incredibly close.

She was not there, as some believed, to hide his homosexuality from the public. 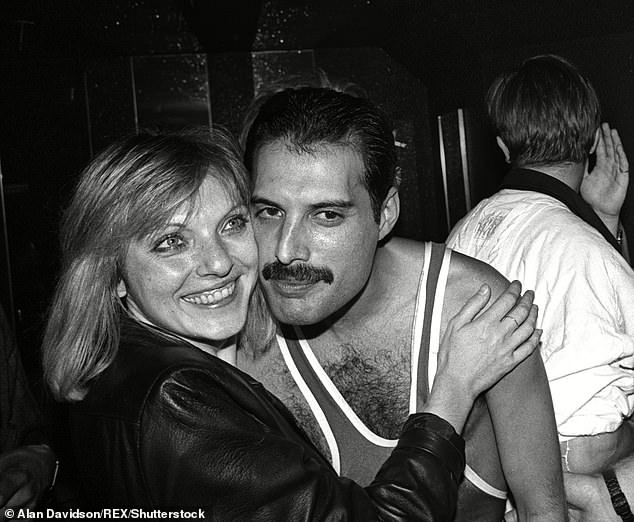 Not only did Freddie ask her to marry him, he also left her half of his £75million estate, including the cherished £25million Georgian mansion in Kensington.

He once said: ‘All my lovers asked me why they couldn’t replace Mary, but it’s simply impossible. The only friend I’ve got is Mary, and I don’t want anybody else. To me, she was my common-law wife. To me, it was a marriage.

‘We believe in each other. That’s enough for me. I couldn’t fall in love with a man the same way as I have with Mary.’

The 67-year-old now lives as a recluse behind the high spiked walls of the mansion, where fans still make regular pilgrimages.

A neighbour told The Sun he rarely sees Mary. He said: ‘In the past four years I’ve seen her twice. She drives an old Mercedes and keeps herself to herself.’ 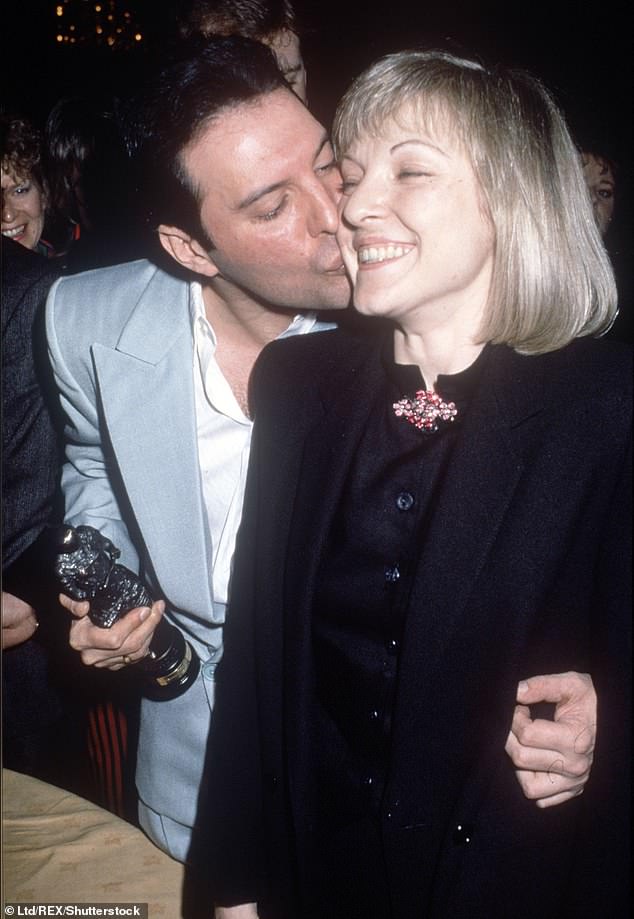 The new film on Queen, called Bohemian Rhapsody, will shine a new light on to the little known romance between Freddie Mercury and Mary Austin

Several years ago Mary upset some of Freddie’s fans by having their graffiti scrubbed from the walls and putting up a transparent plastic sheet to prevent more.

But the interior of the lavishly decorated 28-room palace remains largely unchanged since Freddie’s days. As she did the interior design for him, choosing the Louis XV furniture, there is no reason to change a thing.

While she was not involved in making the new film, which opens in cinemas next month, she is said to have given it her approval. 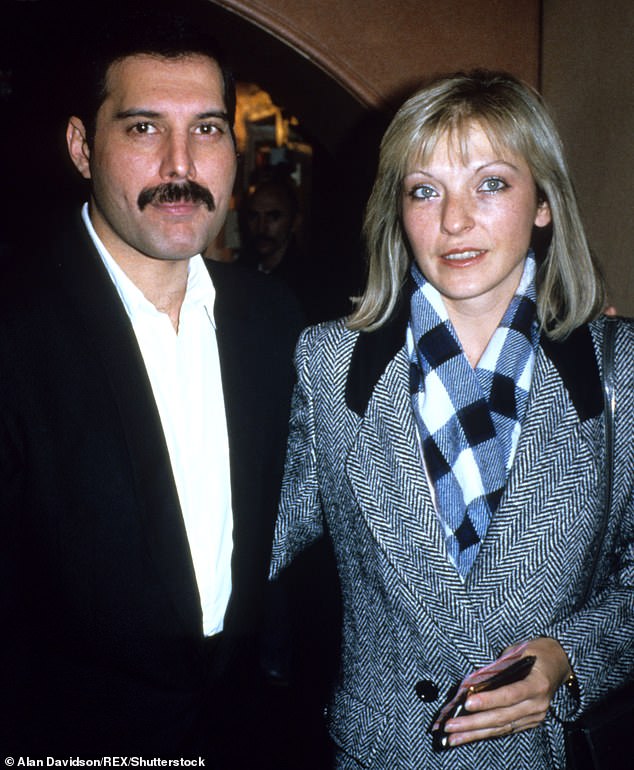 When the trailer for the long-awaited movie came out, there were allegations it was ‘straightwashing’ Freddie’s life by so often showing him with a young blonde

Off screen Lucy and Rami have struck up a romance of their own while making the project, which has spent almost a decade mired in development delays.

X-Men director Bryan Singer was fired near the end of the shoot and Lock Stock’s Dexter Fletcher had to finish the movie.

It is remarkable that it has taken so long to put Freddie’s incredible story on the big screen.

The band’s record label refused to release Bohemian Rhapsody as a single because it was nearly six minutes long, but Freddie persisted and it stayed at the top of the charts for nine weeks. 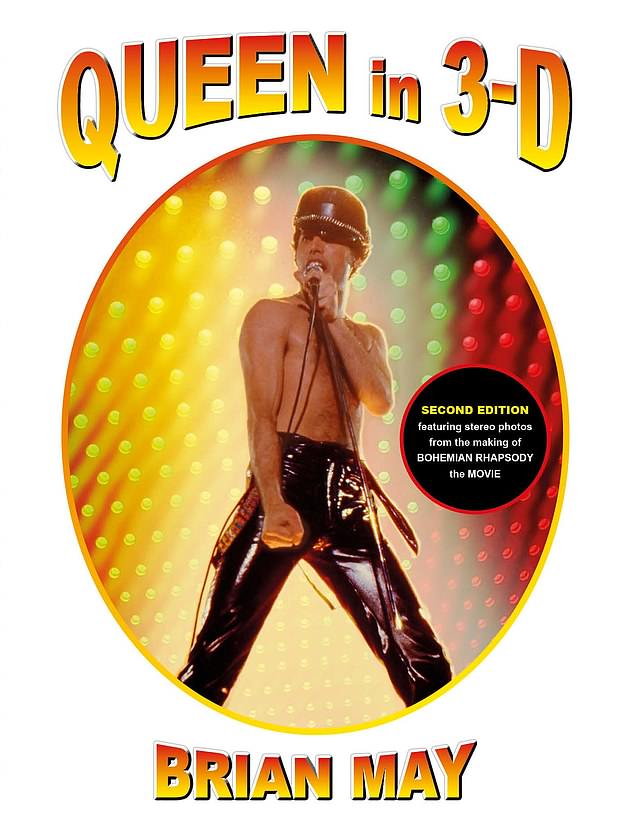 The film, Bohemian Rhapsody, will be released next month with approval from Mary

In a whirlwind romance, he proposed to her in 1973, around the time Queen released their debut album.

While Freddie was both camp on and off stage, sporting outrageous clothes and strutting theatrically, the presence of Mary meant his sexuality was not questioned.

On finding a jade ring inside a series of boxes, Mary said: ‘I was speechless. I remember thinking, ‘I don’t understand what’s going on’. It wasn’t what I’d expected at all.’

But afterwards her suspicions grew as Freddie began sleeping with men behind her back, but she lacked the nerve to confront him.

He later confessed he was ‘bisexual’ in 1976 by the time he was an international star.

Mary once said: ‘I’ll never forget that moment. I remember saying to him, ‘No Freddie, I don’t think you are bisexual. I think you are gay’.’

After that she moved into a nearby flat and Freddie took advantage of the endless supply of men. 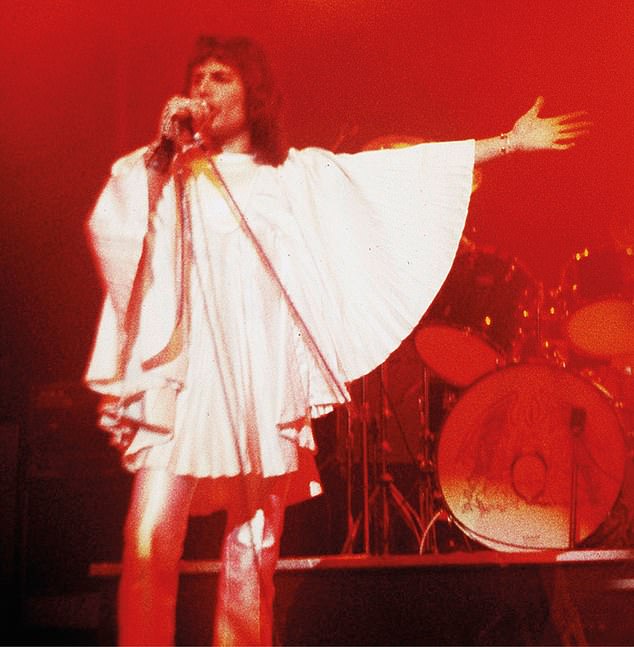 While Freddie was both camp on and off stage, sporting outrageous clothes and strutting theatrically, the presence of Mary meant his sexuality was not questioned

His sex parties were notorious, with male groupies walking about with only women’s hats covering their modesty, or nude models covered in chopped raw liver. By this time Freddie was heavily into cocaine, drinking a couple of bottles of vodka a day and having violent rages.

At one point she is said to have asked Freddie to give her a child, but he told her: ‘I still love you, but I can’t make love to you.’

That reluctance may well have saved her life, because by then he had been infected by the HIV virus.

Freddie had bedded hundreds of people at a time when Aids was unknown. When he was diagnosed in 1987 there was no treatment.

Realising his days were numbered, he signed a will in September 1991 that gave half his wealth to Mary and the rest to his parents and sister. Many of his friends, including lover Jim Hutton, were given £500,000 each or a house.

As the great showman slipped away in November of that year, Mary was by his side, holding his hand and telling how much she loved him.

After his death, aged just 45, Mary carried out his wish to secretly scatter his ashes.

There have been numerous rumours about where she took the urn, including Kensal Green Cemetery, where there is a plaque with his real name, and the cherry tree in his garden, but she hasn’t betrayed his trust.

Mary never found a love that endured like theirs, choosing not to marry painter Piers Cameron, the father of her two children, Jamie and Richard, and divorcing her husband Nick Holford.

And as she later explained: ‘I lost my family, really, when Freddie died. He was everything to me, apart from my sons. He was like no one I had met before.’