Freeze-dried blueberries sold by major stores including Walmart and Amazon are being recalled because they contain unsafe amounts of lead.

The Food and Drug Administration (FDA) has asked for two batches of Natierra blueberries — sold for $6.50 each — to be removed from shelves.

It says anyone who has the blueberries should not eat them, but instead throw them away or take return them to stores for a refund.

BrandStorm Inc, which manufactures the blueberries, says no one has fallen sick or being hospitalized by them so far.

Lead is generally safe at low levels, but when it accumulates in the blood it can trigger abdominal pain, nausea and vomiting.

Children are particularly vulnerable to lead poisoning, which can damage their nervous system leaving them with long-term developmental disorders.

The Food and Drug Administration is recalling two batches of Natierra freeze-dried blueberries (pictured above). It is advising customers to throw away the blueberries because they contain high amounts of lead 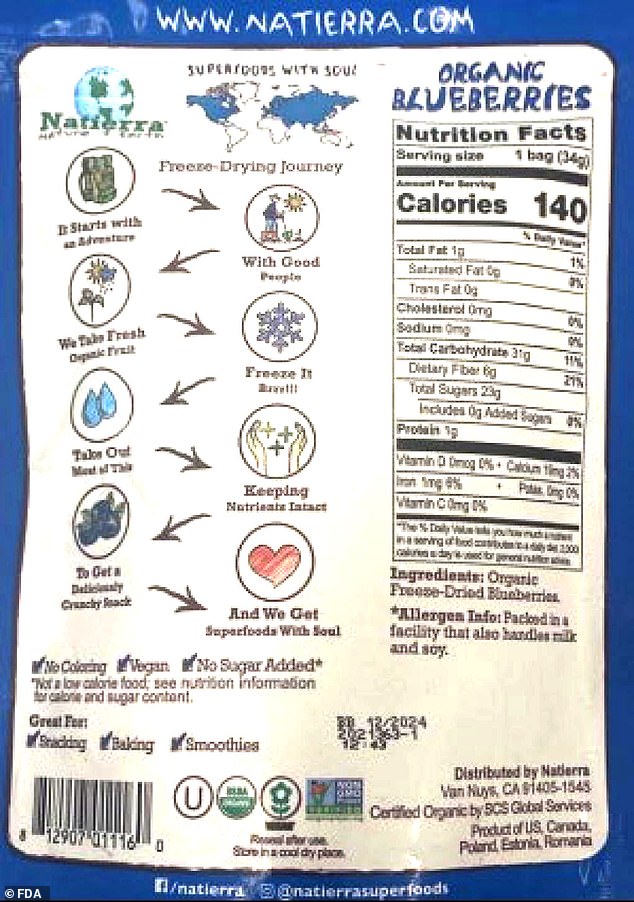 Are my blueberries being recalled?

Two batches of freeze-dried blueberries are being recalled.

They can be identified by the lot number on the bottom right of the white and blue pouch.

The FDA detected the high levels of lead in the blueberries during routine testing at a lab in Maryland.

A preliminary investigation found the original report said no lead was present when the blueberries were harvested.

But they were grown in Lithuania, a European country bordering Russia, which the FDA said suggested ‘aggressive monitoring’ of lead levels was needed.

Supermarkets including Walmart, Kroger, Target and Amazon all sell the blueberries.

The FDA has not revealed how much lead was detected in the batch of Natierra blueberries.

But its guidelines say no foods sold in the U.S. should have lead levels above 0.5 micrograms per deciliter.

This is based on calculations for the amount of lead someone can consume without suffering any ill-effects.

Lead is poisonous to humans at high concentrations, and can affect people of any age or health status, the FDA says.

But experts warn even repeated low-level exposure can be hazardous, because the heavy metal can build up in someone’s body over time.

In children, it can trigger learning disabilities, behavioral difficulties and a lowered IQ studies suggest.

But in adults it can lead to kidney problems, high blood pressure and also neurological issues.