French authorities have put up a 10-foot wall at a petrol station in Calais to stop migrants using the lorries as a way to get to Britain.

The barrier has been installed at a Total petrol station in the French port city which had become a magnet for people smugglers.

The traffickers had been using it to get hundreds of people on to lorries heading for the town’s ferry port, where boats head for England every day.

‘The construction of the wall is explained by the presence of migrants and people smugglers on this site,’ said local prefect Fabien Sudry.

He said it was a place where criminals ‘meet and take advantage of this station near the port to get migrants on to trucks.’

It is believed to be the first time that an entire wall aimed at stopping migration to Britain has been built alongside a problem area at such short notice.

Local paper Nord Littoral posted a picture of the new wall on its Twitter site, showing two migrants next to it.

It has already caused controversy, with local charity workers saying it followed the example of President Donald Trump, who has lobbied for a wall on the Mexican border.

‘The wall is ugly and of course divisive,’ said Caroline, a charity worker who is based in the town, and who asked to be referred to by her first name only.

‘This is very political – it aims to show desperate people that they are not welcome here, and that more and more walls and police will be used to keep them out. If you oppose such policies, you can get into a lot of trouble.’ 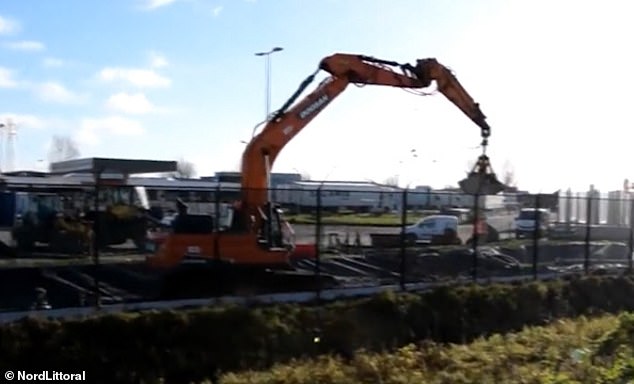 A crane installs the barrier at a Total petrol station near the French ferry port, which had become a magnet for people smugglers

A spokesman for Total confirmed that the wall was built at the request of the Calais prefecture to ‘protect customers, staff and migrants.’

Mainly young men from countries such as Afghanistan and Syria are regularly seen trying to get aboard lorries and other vehicles heading to Britain, either by ferry or via trains going through the Channel Tunnel.

There are currently around 600 migrants in the town, but numbers are well down on 2016, when the so-called Jungle camp was destroyed.

This illegal settlement on the edge of Calais was full of around 8,000 men, women and children at one point – the vast majority wanting to claim asylum in Britain.

The French insist that security is improving all the time, with the British paying a large part of the cost.