A French bus driver who was declared brain dead after he was assaulted by two passengers who refused to wear face masks has died, his family have confirmed.

Philippe Monguillot, 59, was savagely beaten after he tried to enforce coronavirus rules on his bus in the southwestern town of Bayonne on Sunday, in an attack which has caused outrage in France.

Following the attack, two men were charged with attempted murder, two others with non-assistance to a person in danger and another with attempting to hide a suspect, the local prosecutor’s office said.

Mr Monguillot’s 18-year-old daughter Marie told AFP today: ‘We decided to let him go. The doctors were in favour and we were as well.’

Philippe Monguillot (pictured with his wife Veronique Monguillot), 59, was beaten by two passengers after he tried to enforce coronavirus rules on his bus in Bayonne, France, on Sunday 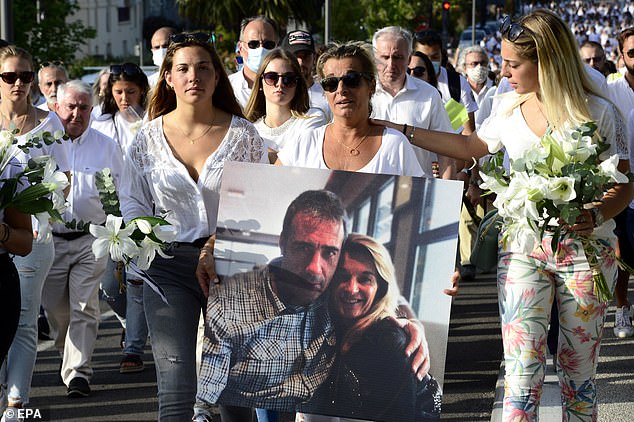 Earlier this week the wife of Mr Monguillot, Veronique Monguillot (pictured centre with her daughter), held a portrait of her husband during a protest in Bayonne 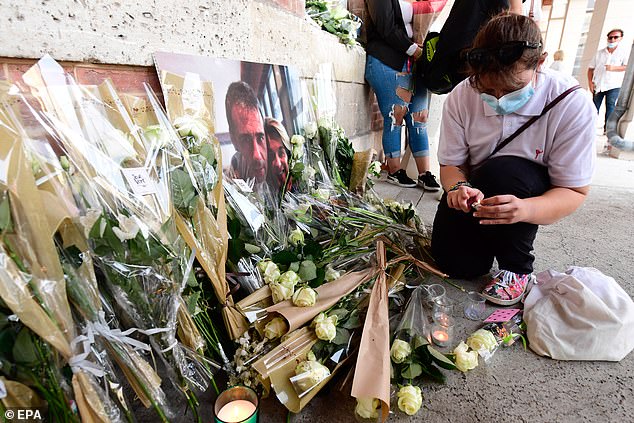 Mr Monguillot was attacked after he asked three passengers to wear masks – in line with coronavirus rules across France – and tried to check another man’s ticket.

The two men accused of attempted murder ‘violently kicked and punched the upper part of his body, including his head’, prosecutors say, while two others have also been arrested on lesser charges.

The two charged with attempted murder are aged 22 and 23. They were previously known to the police.

Bayonne prosecutor Jerome Bourrier, who confirmed the driver had died, said that he would ask for the charges to be changed to take into account his death.

Describing the events of Sunday night, prosecutor Marc Mariee told a press conference that three men had initially boarded the bus near Bayonne’s train station, one of them with a dog.

At a subsequent stop they were joined by a fourth person, at which point the driver went to inspect his ticket – and told the four men to put their masks on.

‘There were insults and then shoving. The bus driver was pushed out of the bus,’ the prosecutor said.

Two of the men are then alleged to have punched and kicked the driver in what the prosecutor called an ‘extremely violent’ attack.

Some of the men made a run for it after leaving the victim critically wounded on the pavement, the prosecutor’s office said.

One person was arrested at the scene while another four were detained at an apartment in Bayonne, although one of them, a minor, was later released. 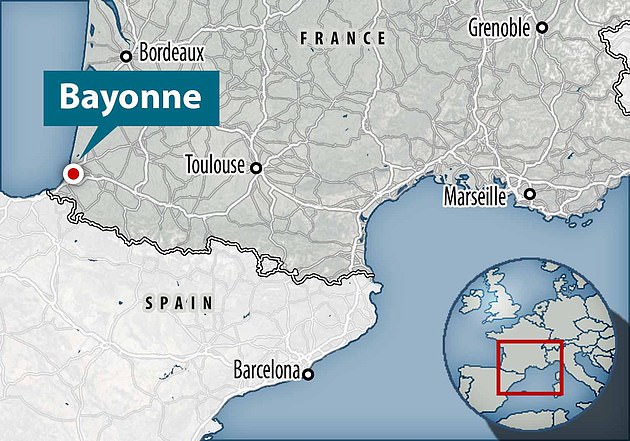 The two men accused of attempted murder ‘violently kicked and punched the upper part of his body, including his head’, say prosecutors after the attack in Bayonne (shown on a map) 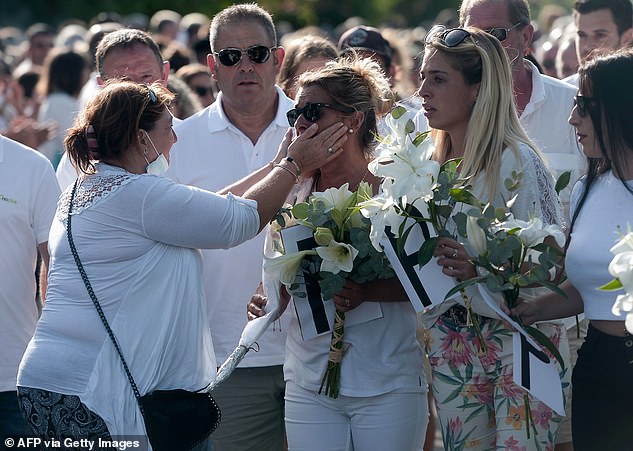 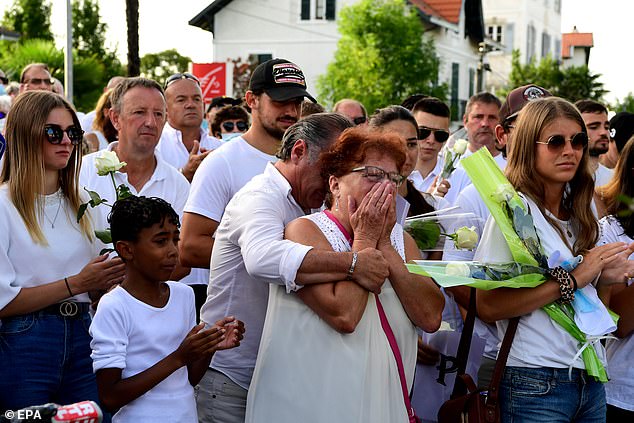 Thousands of people participate in a march in Bayonne, southwestern France, after Philippe Monguillot is attacked

In addition to the two attempted murder charges, two others have been charged with failing to assist to a person in danger while one of them is also accused of attempting to hide a suspect.

Mr Monguillot was unconscious when emergency services arrived and his wife said their lives had been ‘destroyed in a couple of seconds’ by the attack.

Veronique Monguillot previously said: ‘He can’t leave us like this, he was going to be 59 years old soon. No, you don’t do this over a bus ticket. You don’t kill for free like this!’

Speaking to Le Parisien, she added: ‘I don’t want to face the facts… I feel like I’m living a nightmare.’

The Monguillots are the parents of three daughters aged 18, 21 and 24, and they are being supported by friends and colleagues who have set up a support group.

‘Philippe was going to retire in a year and we thought we were going to buy a motorhome in September,’ Mrs Monguillot said.

His daughter Marie added: ‘We are empty… we have no more tears.’ 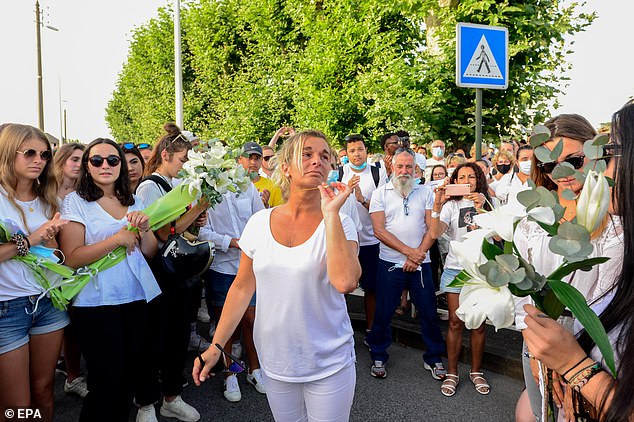 The wife of French bus driver participates in a march in Bayonne, southwestern France

Masks are currently compulsory on all public transport in France, but members of the group refused to put them on when they got on the vehicle – a cross between a bus and a tram run by the Chronoplus company – at about 7pm on Sunday.

The assault on the father of three prompted an outpouring of indignation by his colleagues in Bayonne.

On Wednesday the driver’s family organised a silent march in his honour departing from the bus stop where the assault took place.

Unions also asked transport networks across the country to stop at 7.30pm observe a minute of silence in Mr Monguillot’s memory.

A colleague of Mr Monguillot described him as a ‘decent and hardworking man who always looked after passengers.’

He added: ‘There has been a lot of tension over masks, because they are the law, but bus staff are not police, and we should not have to enforce the law.’

The Chronoplus colleague said there had been three other assaults related to masks in recent days, but none as serious as the one involving Mr Monguillot.

Claude Olive, the Mayor of Bayonne, said meetings were in progress to try and improve security on buses.

‘This was a barbaric attack,’ said Mr Olive. ‘Philippe was a wonderful person who should have been protected.’

Interior Minister Gerald Darmanin is also due to travel to Bayonne on Saturday to discuss the security situation and meet the drivers.