French Champagne house to build huge winery that produces 400,000 bottles of bubbly a year in Kent

A famous French Champagne house has given the UK a boozy boost after it received the green light to build a huge winery in the UK, which will produce 400,000 bottles of bubbly a year.

Champagne Taittinger has been given the go ahead by Ashford Borough Council to construct the state-of-the-art facility in Chilham, Kent.

In collaboration with UK wine agents Hatch Mansfield, the Grande Marque Champagne House will build the winery for bottling and ageing the sparkling wine and also operate tours.

It is the first elite champagne house, from the iconic French region of the same name, to establish a winery in the UK.

The building will be set on their 550-acre vineyard, with magnificent views across the vines and Chilham Castle.

The companies – operating together under the name Domaine Evremond – first bought the land in autumn 2015.

The French champagne experts identified the Kent countryside as having the perfect conditions for grape growing – thanks to its chalk soils, climate and topography.

And now with councillors giving the winery the green light, the vineyard is almost ready for the release of the first bottles in 2024.

Domaine Evremond hopes 400,000 bottles of premium quality sparkling wine will be made each year at the site.

It is named after Charles de Saint-Evremond, who is credited with helping introduce 17th-century London to quaffing champagne from the court of King Charles II.

The wine will be matured for at least three years under carefully-controlled conditions, before the sediment is removed, and it is topped up and capped.

It will be labelled and packaged onsite.

The modern white square buildings will sit within the hillsides in the Kent Downs Area of Outstanding Natural Beauty.

The proposed brick facade was designed to reflect the surrounding chalk downs.

The majority of the winery will actually be underground, to reduce the visual impact. 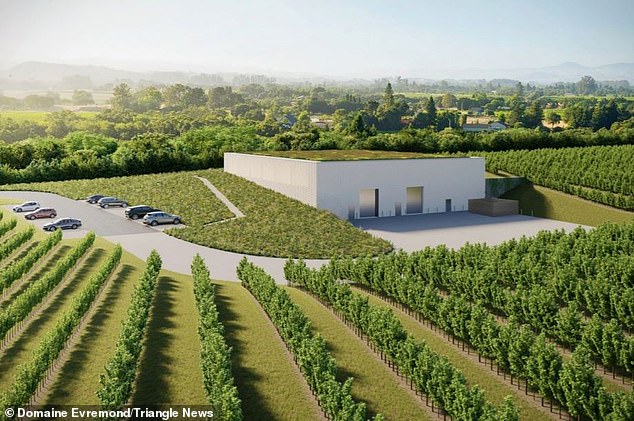 The modern white square buildings will sit within the hillsides in the Kent Downs Area of Outstanding Natural Beauty (concept art pictured above). Some locals raised concerns about the winery, but the majority will be underground to reduce the visual impact on the landscape

Some locals raised concerns that the winery would be a ‘blot on the landscape’ as well as fears of light pollution.

However the plans were unanimously approved by councillors last week.

Ashford Borough Council leader Councillor Gerry Clarkson said: ‘Quite frankly, with this borough being right in the heart of the Garden of England, I can’t think of any development more appropriate than a winery.’

Patrick McGrath, managing director at Hatch Mansfield, said: ‘Our vision is to produce premium English sparkling wine and to deliver a top quality centre in Chilham.

‘Production of the best wine is all about the attention to detail and we’ll be following that same ethos in building our winery and shaping it to fit sympathetically among our vineyards. 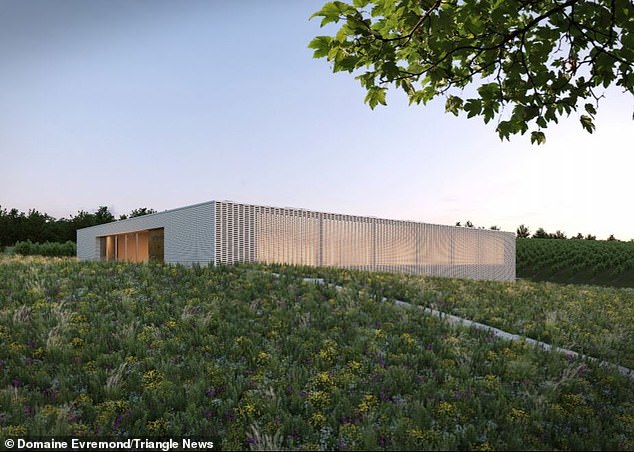 Domaine Evremond hopes 400,000 bottles of premium quality sparkling wine will be made each year at the site (pictured above in concept art)

‘Domaine Evremond is committed to delivering this investment as soon as possible despite current economic circumstances and firmly believes this will cement Ashford’s place on the map as a premier wine-producing region.’

When planting the first vines, Pierre-Emmanuel Taittinger explained: ‘Our family has always had a great affection for the UK and for Kent – my father Jean Taittinger twinned Canterbury with Reims when he was mayor of the latter in the 1950s.

‘We have been very impressed by the quality of English sparkling wine being produced, and we believe the combination of chalk soils, climate and topography of our site in Kent are ideal for producing quality sparkling wine.

‘These attributes are perfect for grape growing, and are very similar to the terroir in Champagne, for us it was a natural step to do this.’

The plans for the winery were unanimously approved by Ashford Borough Council last week. Above, an early stage concept sketch of the winery

Champagne Taittinger is the first of the Grande Marque Champagne Houses to set a vineyard in the UK’s burgeoning sparkling wine industry.

These are the leading elite Champagne companies, which are based in the French region of the same name.

Taittinger is the only one to still be run by its eponymous family.

Founded in 1734, it is based in Reims, France – the unofficial capital of the country’s champagne region.

The family has already had success in producing sparkling wine from the Napa Valley in California, USA.

Did the ENGLISH invent champagne? Taittinger boss claims luxury fizz was created ‘by mistake’ when flat wines were left outside at cold London docks

Pierre-Emmanuel Taittinger, the boss of Taittinger Champagne, said in 2019 that the drink had come about accidentally when still wines were left in cold conditions on London docks.

The name of champagne is protected in Europe, referring to wines produced in the Champagne region of France.

The Interprofessional Committee of Champagne Wine argues that the French region which gives its name to the bubbly was the first to produce it ‘on a regular basis’.

Mr Taittinger said in an interview with Le Figaro: ‘They created Champagne because of a mistake. Benedictine monks were supplying them with still wines from Champagne, red and white wine.

‘The English left these cheap, still white wines on the docks in London and the wines got cold so they started undergoing a second fermentation.

‘Like all great mistakes, it led to a great invention.’

However the official champagne committee says on its website: ‘The fact that the French terms ‘champagnisation’ and ‘méthode champenoise’ were appropriated by other vineyards from the 1830s onwards serves to remind us of where the wine and its techniques did actually originate.

‘Quality considerations aside, a timeline based on documentary evidence clearly shows that Champagne is the first ever sparkling wine to have been made on a regular basis by producers in a specific region. And that region is Champagne.’

Champagne is exported to 190 countries and represents 13 per cent of global sparkling wine production, the committee says.

However English sparkling wine has enjoyed a rise in recent years, rising more than 200 per cent in value in five years, according to the Wine and Spirit Trade Association.

In 2016 it became the fourth-most popular fizz in Britain behind Prosecco, Champagne and Cava.

The wine boss said he ‘loved England’ and called it a ‘big market’ for the luxury product.

The English claim is also backed up by a paper submitted to the Royal Society in 1662 which described how to make sparkling wine.

Taittinger launched its own English vineyard in 2015, planting 30 hectares of Chardonnay, Pinot Noir and Pinot Meunier in Kent.

The firm’s first bottles of English sparkling wine are expected to be ready in 2024, according to its website.