A French consulate worker has been arrested on accusations of using an official car to smuggle dozens of guns from the Gaza Strip to the occupied West Bank, Israeli authorities said Monday.

The French citizen and several Palestinian suspects are accused of belonging to a gun-running network that eventually sold the weapons to arms dealers, Israel’s Shin Bet domestic security agency said in a statement.

It said Romain Franck, in his mid-20s, had taken advantage of reduced security checks for consular vehicles to transport the weapons – 70 pistols and two assault rifles – out of the Palestinian enclave.

Vehicles in the Gaza Strip move towards the Israeli-controlled Erez crossing on November 1, 2017

The Shin Bet said he acted on his own and was motivated by money. His superiors were not aware of his actions, it added.

A spokesman said: ‘The consulate employee smuggled the arms on a number of occasions in recent months while using the French consulate’s consular car, which underwent a more lax security inspection at the border crossing, as is the case with this type of car.

‘The consulate employee transferred arms on five occasions, during which he transferred some 70 pistols and two automatic rifles.’

A total of nine suspects have been arrested and six were to be charged in court later Monday, including Franck.

Gaza, run by Islamist group Hamas, has been under an Israeli blockade for over a decade but weapons have been smuggled in through tunnels from Egypt’s Sinai Peninsula.

News of the February 15 arrest emerged on Sunday, but the details were still unclear.

A spokesman for France’s embassy in Israel said Sunday ‘we take this case very seriously and are in close contact with the Israeli authorities’.

Franck ‘has benefited and continues to enjoy the consular protection’ provided to French nationals, he said.

The Shin Bet called the incident ‘very severe’, saying that ‘the immunity and privileges given to foreign representatives were cynically abused to smuggle dozens of weapons that could be used for terror attacks against Israeli civilians and security forces’.

‘The investigation was conducted in cooperation with the Israeli foreign ministry while constantly updating the French authorities,’ it said. 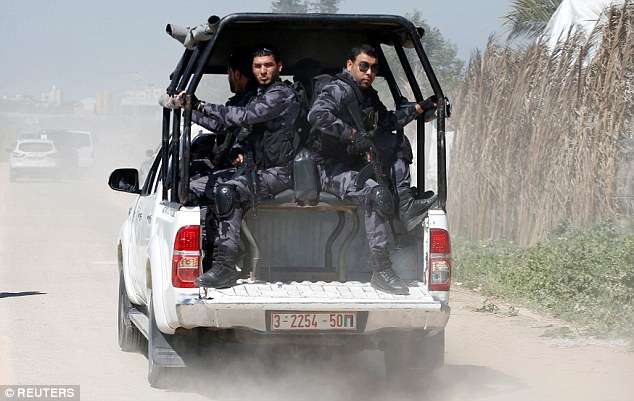 Members of Palestinian Hamas security forces escort the convoy of Palestinian Prime Minister Rami Hamdallah after it was targeted by an explosion, in the northern Gaza Strip March 13, 2018

A Israeli official said on condition of anonymity that while authorities were taking the case ‘very seriously,’ diplomatic relations were not affected.

‘The relations with France are excellent and won’t be affected by this affair,’ the official said.

‘We thank the French authorities for their cooperation.’

Those entering and exiting the Gaza Strip through the Erez crossing with Israel undergo strict security checks by Israeli authorities, but these measures are eased for diplomatic visitors.

The Palestinian enclave, home to some two million people, is sealed off from Israel by a wall.

Israel and Palestinian militants in Gaza have fought three wars since 2008.

Israeli authorities carry out regular operations to seize weapons in the West Bank, which has been under Israeli occupation since 1967.