French flasher fined after exposing himself to women on trains

Pervert Monir Fahmedine (pictured), 33, flashed women on trains around Newcastle from December to January 2018. He was fined £240 after admitting to six counts of indecent exposure

A French flasher who exposed his genitals to teenage girls on six separate occasions claimed he did it because ‘he missed his family back home in France.’

University graduate Monir Fahmedine, 33, flashed at teenage girls and women on Metro trains around Newcastle from December to January 2018.

North Tyneside Magistrates’ Court heard that two of the 33-year-old’s victims were only 14 and 16.

The serial flasher was finally identified by police and interviewed, where his explanation for his depraved behaviour was because he was homesick.

Now, Fahmedine, who is from France but has been living in Heaton, a popular student suburb in the city, for just over a year, has been fined a total of £240 after he pleaded guilty to six counts of indecent exposure.

‘All occurred on the Metro system while the defendant was on the Metro,’ Ms Baker told the court.

‘The defendant exposed his penis to women on each occasion. There were three offences on December 9, two on January 8 and one on January 13.

Fahmedine, who has no past convictions and is a graduate in international commerce, was finally identified after his last offence on January 13.

The prosecutor added: ‘When interviewed, the defendant made full admissions to the police and the only explanation he could give was because he was missing his family in France.’ 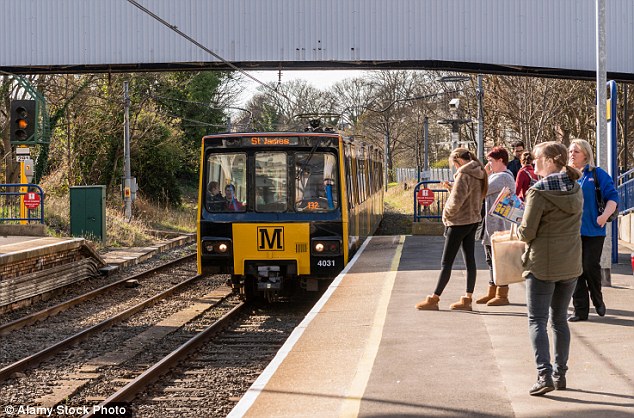 University graduate Fahmedine flashed at teenage girls and women on Metro trains around Newcastle from December to January 2018. When he was finally arrested he claimed he did it because ‘he missed his family back home in France’

The court was told Fahmedine had come to Newcastle in February last year to work for a French energy company based in the city.

However, magistrates heard, because of the language barrier, he became isolated and missed his family and friends back in his home country.

Adrian Ions, defending, said: ‘It’s quite clear that, during this period, he suffered from depression. The offences are bizarre and completely out of character.

As well as the fine, Fahmedine was ordered to pay £85 costs and a £30 victim surcharge.

The court was also told that he would be returning to France to live next week.