France has agreed a £7billion payrise and hiring spree for its healthcare workers after they took to the streets in protest following the coronavirus crisis.

The money will largely cover pay rises for existing staff – with nurses, care workers and non-medical staff getting the bulk of it – while 15,000 new staff will be hired.

The move comes after two months of negotiations that were launched by Emmanuel Macron amid protests over his handling of the crisis.

It is likely to increase calls for other hard-hit European countries – such as the UK, Spain and Italy – to follow suit.

France has agreed to give its health workers a £7billion payrise for helping to tackle the coronavirus crisis following weeks of protests (pictured, marchers in Bordeaux) 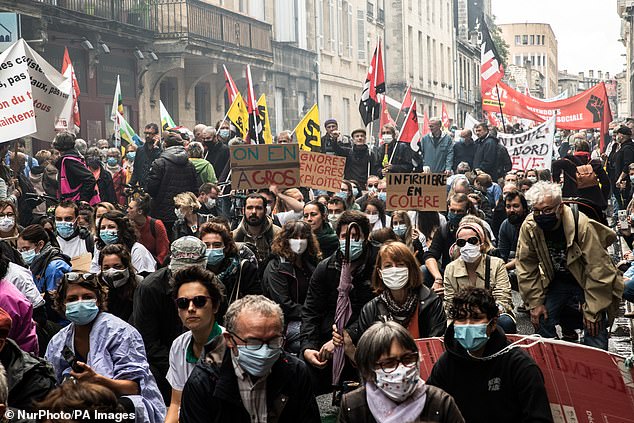 The majority of them money will be spent on pay rises for nurses, carers and non-medical workers, with 15,000 new staff also recruited (file image)

Health workers were regularly honoured during France’s first wave of coronavirus with people applauding their efforts from their doorsteps.

But medics demanded concrete reward for their sacrifice, and took to the streets demanding investment after years of cuts to the health system.

The demonstrations sometimes descended into rioting amid fears they were being hijakced by Antifa, with police using tear gas and baton charges.

But on Tuesday negotiations yielded a deal that a majority of unions have now signed up to.

New French Prime Minister Jean Castex hailed the deal as an ‘historic moment for our health system’ at a signing ceremony on Monday.

‘This is first of all recognition of those who have been on the front line in the fight against this epidemic,’ he said.

‘It’s also a way of catching up the delay for each and every one – including perhaps myself – has their share of responsibility.’

The pay rise was announced a day before Bastille Day celebrations, which will see traditional military parades side-lined so health workers can be honoured instead.

Supermarket cashiers, postal workers and other essential staff will also be honoured, along with former President Charles de Gaulle, eight decades after the historic appeal he made to opponents of France’s Nazi occupiers that gave birth to the French Resistance. 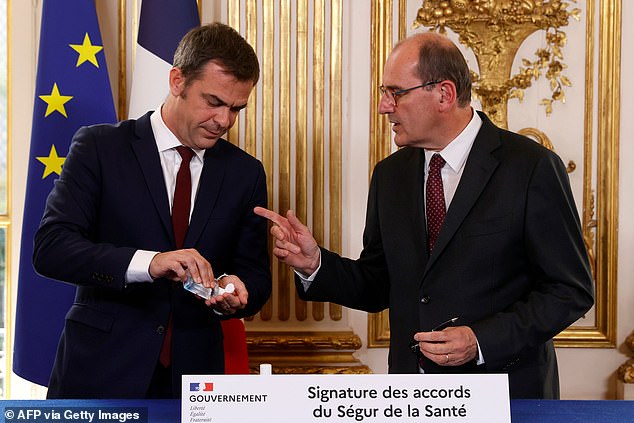 But the battle against the virus, which has claimed more than 30,000 lives in France, is expected to be the main focus of the official event in central Paris, as President Emmanuel Macron seeks to highlight France’s successes in combating its worst crisis since World War II.

Across town from the the Place de la Concorde, protesters plan to highlight France’s failures during the pandemic.

Medical workers and others who decried mask shortages and cost cuts that left one of the world’s best health care systems ill-prepared for the galloping spread of the virus are expected to demonstrate.

The destination of their protest march wasn’t chosen by chance: They’re set to head to Bastille plaza, the former home of a royal prison that rebels stormed on July 14, 1789, symbolically marking the beginning of the French Revolution.

At Tuesday’s main ceremony, fighter jets will paint the sky with blue-white-and-red smoke and will be joined by helicopters that transported COVID-19 patients in distress.

A military band will sing the Marseillaise national anthem to 2,000 special guests.

This year, instead of world leaders or other dignitaries, those guests will be nurses, doctors, supermarket and nursing home workers, mask makers, lab technicians and others who kept France going during its strict nationwide lockdown. 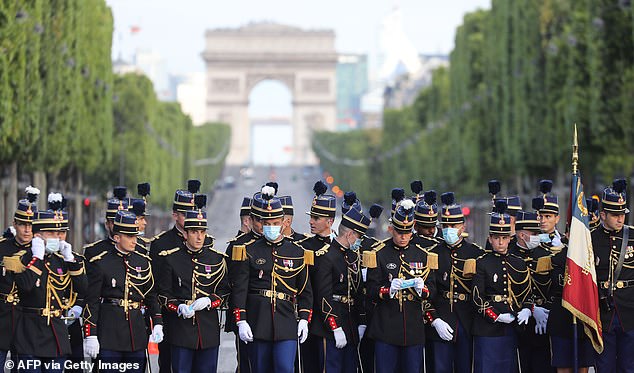 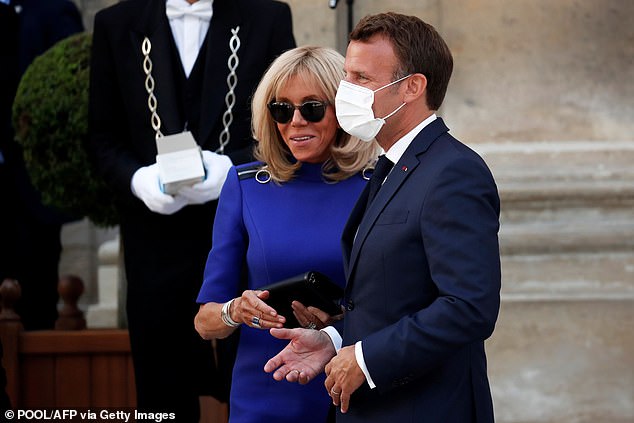 Emmanuel Macron (pictured ahead of Bastille Day with wife Brigitte) has spent most of his first term battling with unions, but finally struck a deal backed by a majority on Monday

Families of medical workers who died with the virus also have a place in the stands.

‘Exceptionally, this year, our armies … will cede the primary place to the women and men in hospital coats who fought’ the virus and who remain ‘ramparts in the crisis,’ Macron said.

He hailed the French military for building a field hospital and carrying patients in cargo jets or specially fitted high-speed trains, and paid tribute to the volunteers who allowed ‘our nation to hold on.’

Ordinary French citizens won’t be able to honor front-line workers in person, however, because the Paris ceremony is closed to the public, to prevent new virus infections. And the usual military parade down the Champs-Elysees is being truncated to a smaller affair.

Even the annual fireworks display over the Eiffel Tower will be largely restricted to television viewers only, since City Hall is closing off the heart of Paris, including embankments of the Seine and other neighborhoods where crowds usually gather on Bastille Day.

France has one of the world’s highest virus death tolls, and scientists are warning of a potential resurgence as people abandon social distancing practices, hold dance parties and head off on summer vacations.