French Open forced to reduce number of fans to just 1,000 per day to comply with new rules

French Open forced to reduce number of fans allowed in to just 1,000 per day to comply with new rules as COVID-19 cases continue to soar in Paris

The French Tennis Federation said it ‘deeply regrets these new restrictions’ after confirming only 1,000 fans per day will be allowed to attend the French Open.

Having reduced the daily capacity from a planned for 11,500 fans to 5,000 a week ago, tournament organisers have now had to reduce further to comply with new rules introduced to try to curb France’s soaring rate of coronavirus infections.

Tournament director Guy Forget told a press conference on Thursday that organisers were still hopeful of keeping to their 5,000 tally despite restrictions announced by the minister of health that specifically targeted sporting events.

Only 1,000 fans per day will be allowed to attend the French Open due to new restrictions

Forget said: ‘We are playing the tournament on the size of 15 football fields on an outside stadium and we have all the health procedures with the masks, with the gel to clean your hands. We’re pretty confident.’

But French Prime Minister Jean Castex said on TV on Thursday evening that Roland Garros would not be exempt and the inevitable announcement arrived on Friday morning.

Around 35,000 spectators usually attend the tournament every day during the first week, and a statement from organisers read: ‘From the very outset of the public health crisis that our country is experiencing, the French Tennis Federation has consistently worked closely with government departments to determine how to organize the tournament in the current situation. 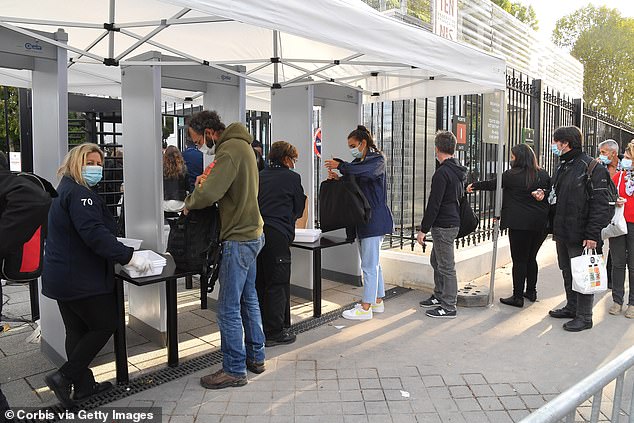 ‘It deeply regrets these new restrictions.’

With the tournament beginning on Sunday, organisers have been left with a major logistical headache.

Current ticket-holders will be put into a draw for the 1,000 places, with those who miss out given priority access for 2021.