By Lauren Lewis For Mailonline and Afp

Police have shot dead a man with psychiatric problems suspected of beheading a 13-year-old boy and mutilating his body in southern France, a prosecutor said on Monday.

Police made the grisly discovery of a body and severed head on Sunday evening in an apartment in the town of Tarascon.

The flat was rented by a 32-year-old man with a psychiatric disorder who was shot dead by police, local public prosecutor Laurent Gumbau told AFP.

Gumbau said that an investigation into the disappearance of a boy from a care home in the city of Marseille, 100km (60 miles) to the east, had led police to the address in Tarascon.

Police have shot dead a man with psychiatric problems suspected of beheading a 13-year-old boy and mutilating his body in Tarascon, southern France (stock)

Police entered the address after receiving a tip from a man who said he believed he saw a bag containing human body parts inside.

Officers found a partially eaten decapitated body in a bag with satanic objects inside the property.

‘The body found may be that of the minor,’ Gumbau said, adding that strips of flesh had been ripped from a shoulder, fuelling suspicions of cannibalism.

Gumbau said that it was ‘impossible at the current time to confirm the cannibalism hypothesis.’

The man, who had previous convictions for acts of violence, fled the apartment over the rooftops, according to neighbours.

The police eventually located him at another location in Tarascon three hours later and shot him dead, the prosecutor said.

He added that the suspect did not appear to have been armed at the time of his death and that he had not been formally identified as the killer of the person whose body was found in the apartment.

A police oversight body is investigating the circumstances of his killing and an autopsy has been ordered on both bodies. 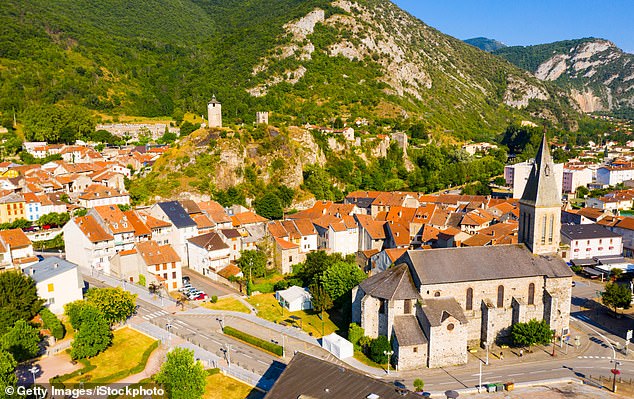 Officers found a partially eaten decapitated body in a bag with satanic objects inside the Tarascon apartment, prosecutors said on Monday (stock)