Squadrons of French riot police descended on a sprawling migrant centre near Dunkirk this morning as they prepared to dismantle the camp that has become a launch-pad for illegal boat crossings to Britain.

Armed with tear gas and heavy batons squadrons of the heavily-armed officers began clearing the 1,200-capacity encampment at Grande-Synthe near Dunkirk before dawn today.

The first migrants – a small group of young children – were escorted out of the camp shortly before 8am local time.

Riot police have this morning moved in on the Grande-Synthe migrant camp, Dunkirk. A group of small children were first to be escorted from the camp to be dispersed around France 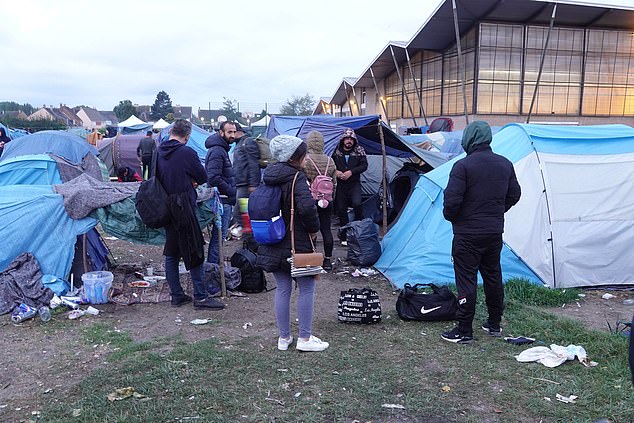 Armed with tear gas and heavy batons squadrons of the heavily-armed officers began clearing the camp where 1,200 people – mostly Kurds from Iraq – are currently living 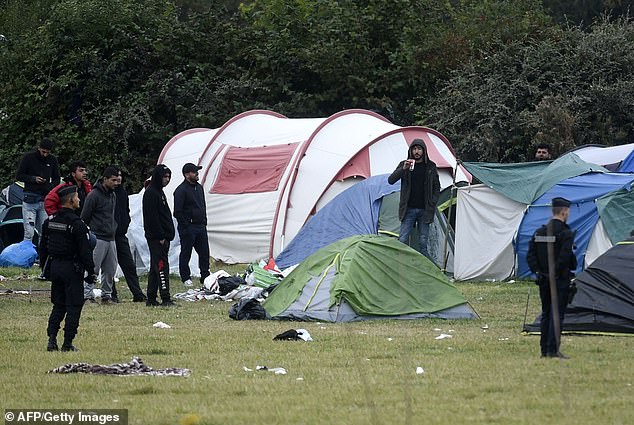 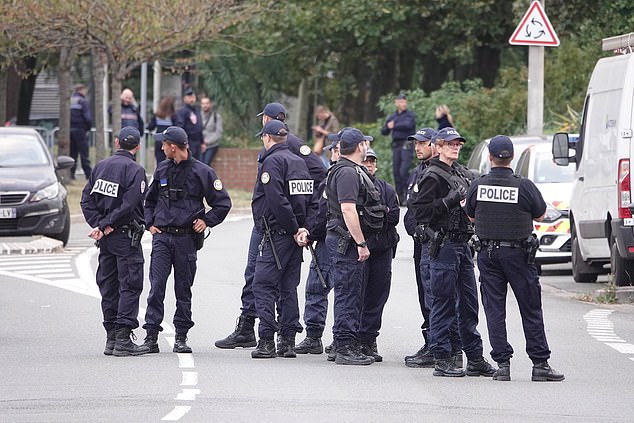 More than 200 police officers from various forces have been drafted in to take part in the operation. Today they were seen standing around as they began the clearance first phase

Immigration officials from France’s Interior Ministry were accompanied into the centre as part of the operation.

More than 200 police officers from the various different forces – CRS riot police, Gendarmerie Nationale, Police Nationale and Police Municipale – have been drafted in to take part in the operation.

Government officials disperse the camp residents across the whole of France – often hundreds of miles from the English Channel.

Drivers of the coaches are only told their destination at the last moment. Then they will be displaced to refugee reception centres across France where they will be encouraged to apply for asylum in France.

But migrants have told MailOnline how they will obey police instructions to vacate the camp but will return to the coast within days.

The vast majority refuse to give up their dreams of starting a new life in Britain and will return to the north coast to make fresh attempts to cross the Channel – in the back of a lorry, underneath a Eurostar train or braving the winter weather in a rubber boat.

‘Today we go with the police but we will be back in three days,’ said Mohammed from Erbil, Iraq.

‘I am here with my wife and daughter so we will not resist. But we will not stop trying to get to England.’ 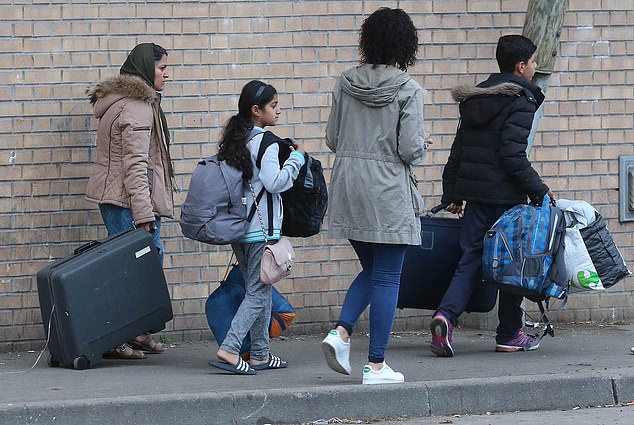 A Councillor in France has said a ‘perfect storm’ of the Dunkirk camp closing, the threat of a freezing winter and Brexit has meant that migrants are more desperate than ever to reach the UK for the October 31 deadline 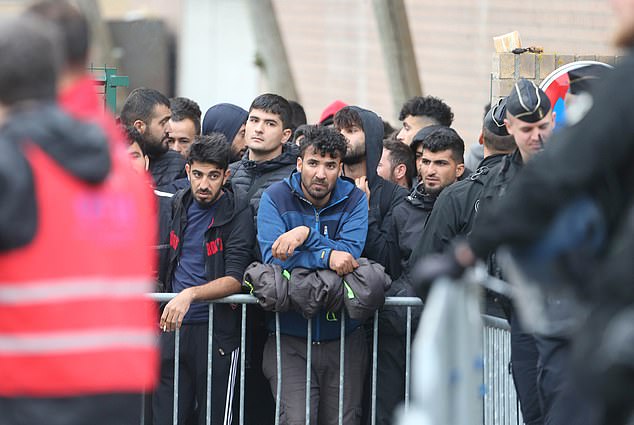 One migrant, a married father of two children, told MailOnline only death would make him stop trying to reach Britain.

‘You can only die once,’ Saman Ali, said as he sat on a make-shift bench around a wood fire. ‘I know it is dangerous to try to cross the sea to England but we will not stop trying. 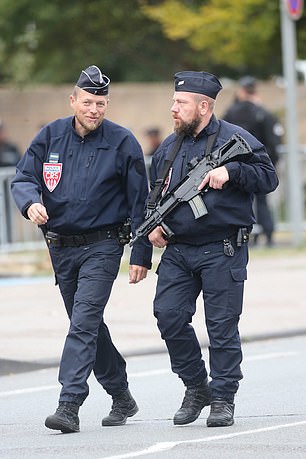 Officers from the various different forces – CRS riot police, Gendarmerie Nationale, Police Nationale and Police Municipale – have been drafted in to take part in the operation

‘I want to give my family, my children a better life and I will do this, or I will die trying.’

Mr Ali, one of dozens of parents with young children at the sprawling camp at Grande-Synthe, fled Iraq after ISIS overran their village.

He lived with his family in Turkey for several years before embarking on their epic trip to Britain. And he vowed never to stop trying.

People traffickers are believed to have infiltrated the camp at Grande-Synthe demanding thousands of pounds to organise illegal crossings to Britain.

One man, known as ‘the boss’, is rumoured to be charge of the growing number of boat crossings.

He orders passengers to take taxis to remote spots along the coast in the middle of the night. The migrants, who often include small children, must then walk several miles where an inflatable rub is ready and waiting.

Setting off in pitch darkness the passengers are ordered to navigate by the moon and use their mobile phones to call for help if they get into distress. 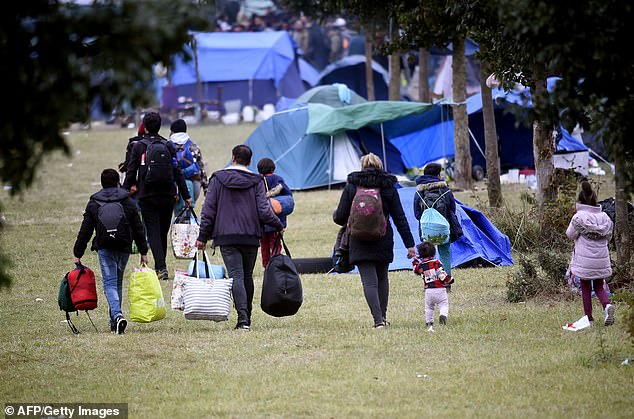 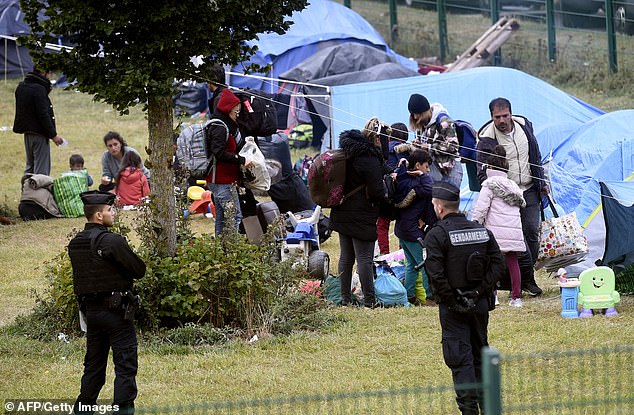 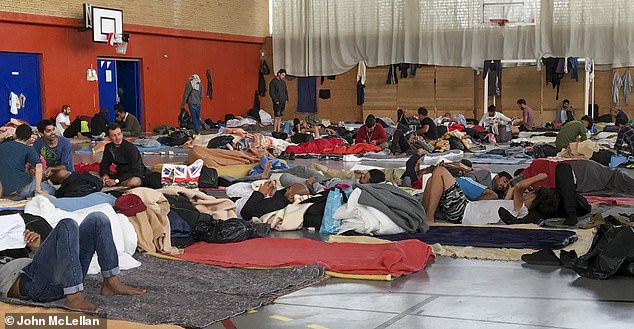 The male sleeping area inside the Espace Jeunes du Moulin refuge centre in Grande Synthe, Dunkirk before the eviction began this morning 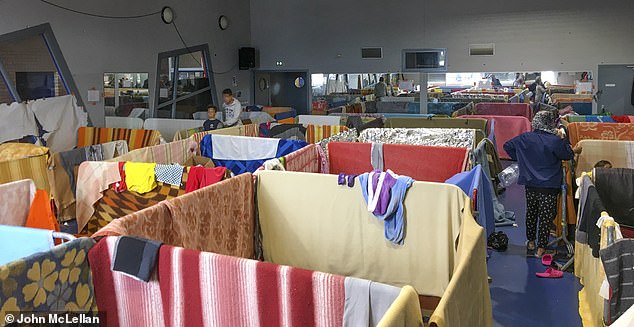 Migrant welfare groups have condemned the camp eviction claiming it would not stop people trying to reach Britain but would simply make their conditions worse.

Claire Moseley, of Care4Calais, said: ‘The migrants will be taken to reception centre away from the coast. They will be encourage to apply for asylum in France but most won’t. The vast majority will be back at the coast within days. But they will be living in terrible conditions.’

Claire Millot, of charity Salam, added: ‘Closing the camp does nothing to stop migrants trying to reach England. It only makes people live in terrible conditions and without dignity. It is unnecessary.’