French fisherman who attacked British boats in the so called ‘scallop wars’ raging in the English Channel have vowed to stop up their protests.

Skippers in France have boasted they have ‘won a battle’ and say they are now preparing to put pressure on their country’s shop to take British caught scallops off shelves.

The dispute blew up off the coast of France this week after Normandy crews accused UK trawlers of ‘pillaging’ the shellfish in a row over access to the Seine Bay.

Anthony Quesnel, captain of La Rose des Vents, one of the boats damaged in the clashes, said: ‘If we let them do what they want, they’ll ravage the area.

‘In the end, it’s worth it, because they left.’

He told The Times: ‘We won a battle but we haven’t won the war.’

Fisherman Stephane Le Francois told Sky News: If ever they were to come back into our waters, then we will do the same again, but this time with larger numbers.

‘We are now much more motivated.

‘We won’t use weapons, unlike what some people are saying in England, but we will have other things on board that are a little different. A little less aggressive.’

Maritime authorities have appealed for calm and branded the clashes – in which French fisherman threw stones, flares and pieces of anchor – ‘very dangerous’. 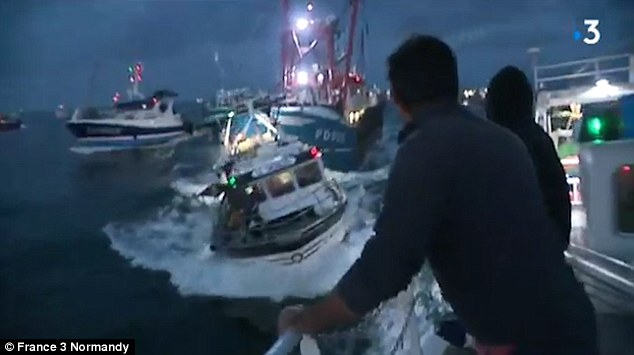 Fishing vessels had set off from Trouville-sur-Mer, Port-en-Bessin and Ouistreham to confront the English. It is not clear which ports the small British fleet were from 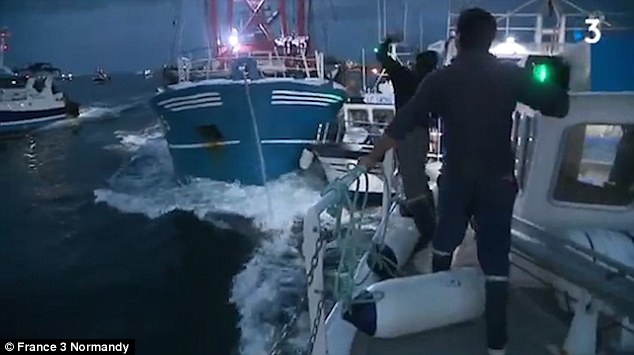 Earlier this week 40 French boats tried to stop five larger British boats from fishing 12 nautical miles off the Normandy coast, in the Bay of Seine.

UK boats are entitled to fish in the scallop-rich area, but their presence has angered the French, who accuse the British of depleting shellfish stocks.

It comes as Tory Eurosceptics told Environment Secretary Michael Gove that Britain must take back control of its waters in the wake of the row.

They said they felt ‘angry and let down’ as they hit out at Theresa May’s Chequers Brexit deal and called on the Royal Navy to be put on standby. 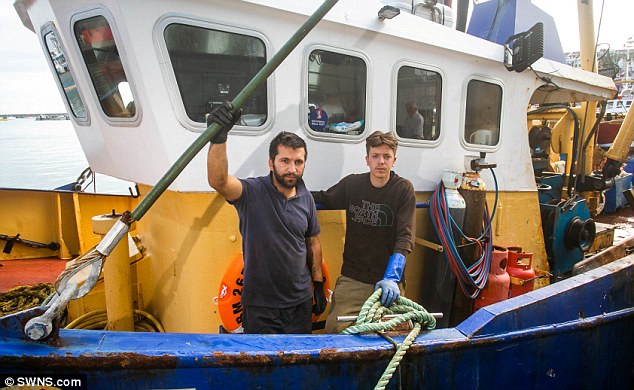 Fishermen Nathan and Callum Clark were among those attacked by the French this week. They said it was ‘very scary’ when French crews threw rocks and pieces of metal at them 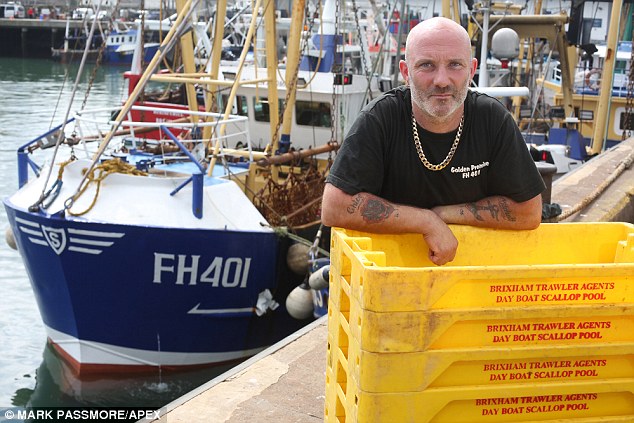 The Daily Telegraph reported Tory Owen Paterson said on a WhatsApp group of Eurosceptic MPs: ‘Our boats would not have to go over to French waters if they had fair access to our own.

‘We should chuck Chequers and establish our full control of our EEZ [Exclusive Economic Zone] out to 200 miles.

‘We should then start managing our waters properly, learning from competent maritime nations.’ 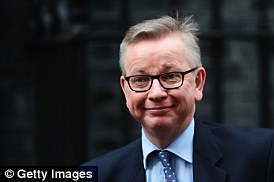 Michael Gove has backed British fishermen in the scallop wars – and told the French to bring order to their waters.

The Environment Secretary hit out at the ‘terrible’ scenes British fishermen have been subjected to in the Channel.

And he said it is clear that the British fishermen have every right to fish there.

He said: ‘My heart goes out to the British fishermen who were caught up in the terrible scenes that we saw happen earlier this week.

‘They were fishing entirely legally, they had every right to be in those waters and we talked to the French authorities in order to ensure that we have a protocol.

‘These are French waters – it’s the responsibility of the French to ensure that those who have a legal right to fish can continue to fish uninterrupted.’

It is understood that British minsters are in contact with the French administration in an effort to prevent a repeat of the scenes.

British fisherman have insisted they have done nothing wrong and will return to fish in the area at the end of this week.

Derek Meridith, who owns two boats involved in the dispute, said: ‘The French need to stop taking the law into their own hands. It’s terrorism. If we done it in this country we would be locked up as terrorists.’

Brian Whittington, skipper of the trawler Golden Promise, which was also involved in the battle, also plans to return.

He said: ‘We’ll go back. It’s international waters – we’re allowed there. Maybe the Royal Navy could help us next time.’

‘My nephew Callum was petrified – it’s his first year on the boats and he was scared for his life. We had to get him in the boathouse to get him under cover and away from the objects being thrown.’

But despite safety fears, the boat will return to the area later this week, with Mr Clark insisting: ‘It won’t stop us. We’ll take a few days off but we’ll go back out there again.’

‘At sea there is always the threat that the smallest incident can lead to loss of life and it’s extremely fortunate that no one lost their lives or was seriously hurt,’ he said.

‘We have emailed French colleagues and pleaded for an end to this messy affair.’

Locals in Devon have meanwhile warned that someone could be killed if something is not done to stop the clashes.

On Monday, a British fleet of four boats was up against at least 40 from Northern France. Crews claim the French Navy and coastguard stood by before police finally intervened.

Theresa May was asked about the issue and called for those involved to hold talks.

She told reporters: ‘I think it’s important we see an amicable solution to what has happened in the Channel.

‘It’s what we want and it’s what France wants and we will be working on that.’ 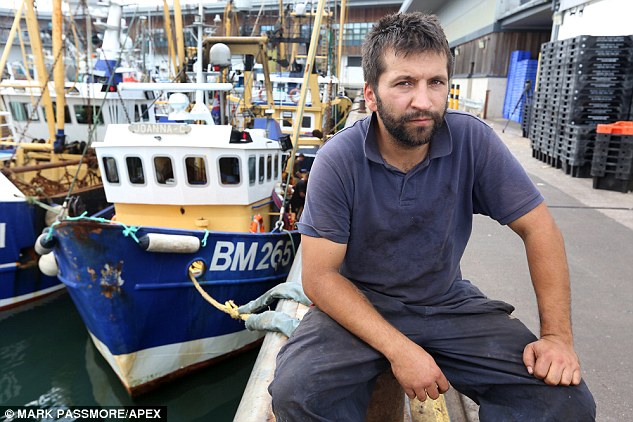 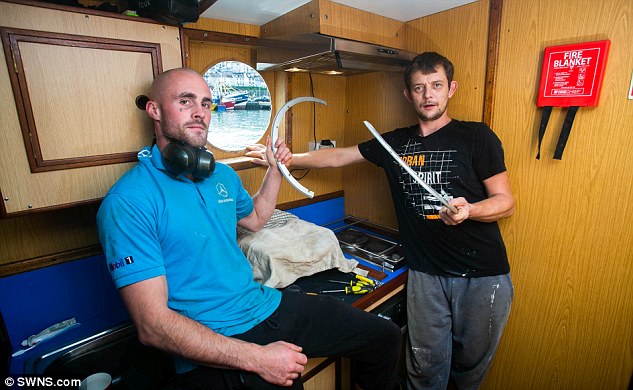 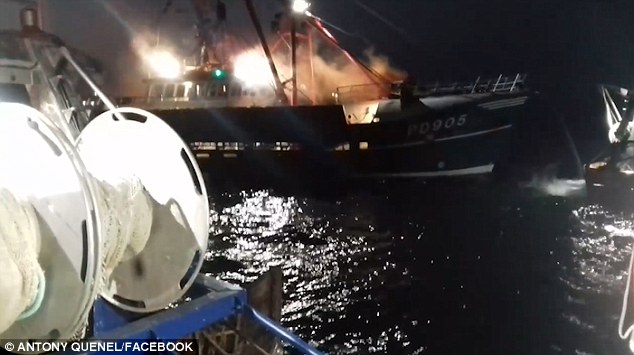 French fishing boats are smashing up British crab pots amid furious rows between trawler crews on either side of the Channel, UK fisherman have claimed.

British crews have now accused the French of destroying and damaging crab pots off the coast of Newquay and Padstow as they trawl the waters off Cornwall.

Fisherman Martin Gilbert said he has he lost 50 crab pots, worth an estimated £3,000, after 10 French trawlers, some up to 85 feet long, entered waters where British crews usually fish. 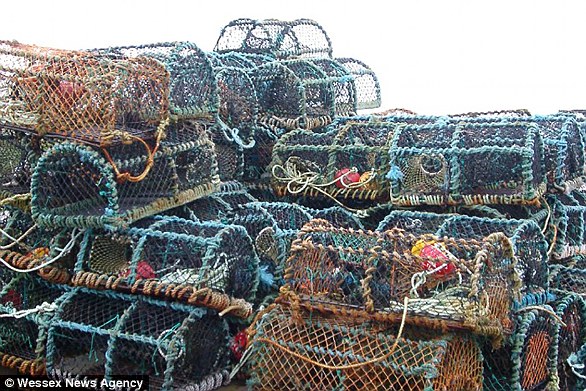 He told local paper The Newquay Voice: ‘What they have been doing is towing the crab pots out of the way so they can make room to drag their nets. Three boats in Newquay have been clobbered and a Padstow boat had 150 crab pots dragged away.

‘There is an understanding that the French fishermen keep away from our crab pots and we stay away from theirs, but they encroach on our pots all the time. It is getting worse year on year.’

Fishermen hope that, after Brexit, French boats will not be able to enter a 12-mile limit, potentially solving the issue.

Tensions have run high for at least 15 years, during the so-called ‘Scallop Wars’. The French want their ‘Anglo-Saxon’ enemies to stay north of a line from Barfleur to Cap d’Antifer, both in Normandy, and only to use small vessels to avoid running down supplies.

But residents in Brixham, where some of the boats caught up in the dispute are based, have backed British fishermen.

On a local Facebook discussion, Andrew Elsey wrote: ‘French pain in a***, I hope they get the book thrown at then as someone will get killed or hurt.’

Patricia Shears added: ‘They have done exactly the same to us in our waters. We watched them cleaning out Torbay many years ago. Could see it all happening from our house.’ 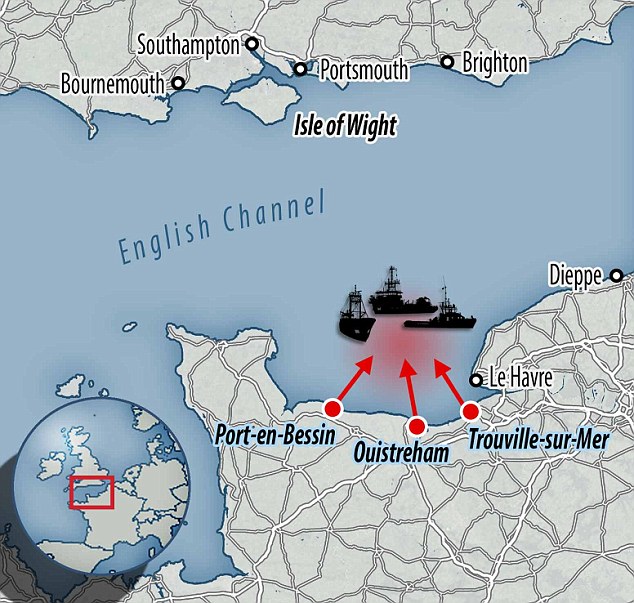 French boats sailed out from Trouville-sur-Mer, Port-en-Bessin and Ouistreham on the North coast of France to meet English scallop boats in the Seine Bay (shown by red marker) – a scallop-rich area off Normandy 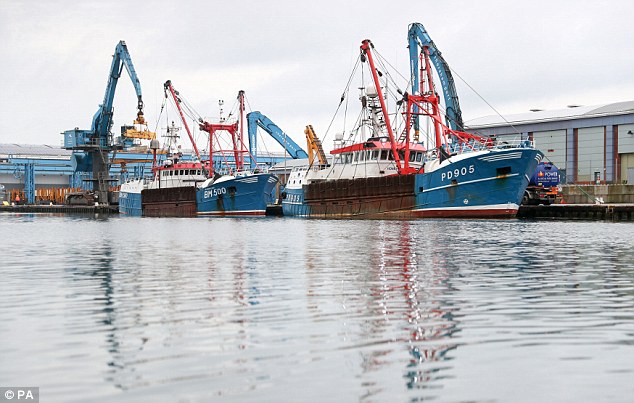 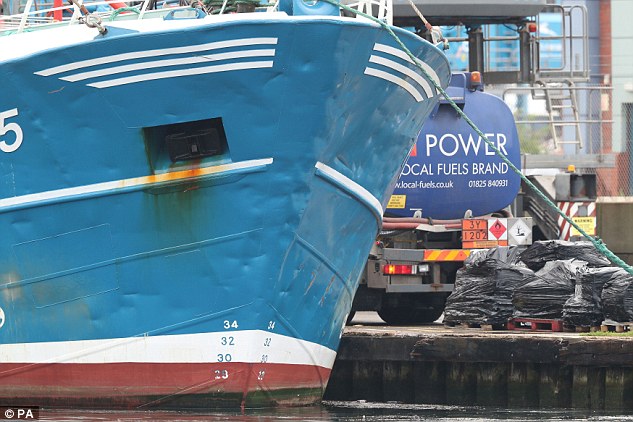 Some locals called for the Royal Navy to be sent out to protect British boats.

Mr Deas said: ‘We have raised the matter with the British Government and asked for protection for our vessels, which are fishing legitimately.

‘The deeper issues behind the clashes should be settled by talking, not on the high seas where people could be hurt.’

Normandy fishing chief Dimitri Rogoff said: ‘The French engaged the British to stop them fishing, they clashed with each other.’

He claimed the British were ‘pillaging’ the multi-million-pound scallop supply crucial to both the French and UK fishing industries. He said: ‘Stones were thrown but there were no injuries or damage.

‘The French regulation requires French fishermen not to exploit scallops between May 15 and October 1. The British do not have to respect this regulation.’

The UK has no such regulation, although in previous years an agreement has allowed both sides to fish fairly. This year, no such agreement is in place.

History of the ‘Scallops War’

Britain’s scallop fishing industry is worth around £120million a year and supports more than 1,200 jobs.

But under EU law, the British are not allowed to fish within 12 miles of the French coast.

UK fishermen can dredge for scallops in the 40-mile stretch of international water known as the Bay of Seine – while the French have access from November to February.

Fierce competition between the nations has been simmering since the long-running dispute blew up in 2012 in an incident in which French fishermen attempted to ram British boats.

The dispute was nicknamed the ‘Guerre de la Coquille’ when again British and French fishermen clashed this time off the coast of Le Havre, France.

French fishermen believe that British fishermen were coming within France’s twelve-mile zone inside the Bay of Seine to dredge for scallops.

The situation was worsened by the fact that the French fishermen were banned from fishing for scallops over the summer months as a measure to allow stocks to spawn and regenerate.

But British fishermen were allowed to dredge scallops all year round, although they only had a limited numbers of day to access the best fishing grounds.

They rammed British boats, pelted them with iron bars and rocks and attempted to snag their propellers with rope.

Protests have seen Norman fishermen overturn trays of scallops in supermarkets and hurl fish in front of shoppers and they have even set fire to live lambs.