‘Maybe someday I’ll join Barcelona, but not this season’: Frenkie De Jong confirms he will stay at Ajax despite interest from Spanish giants

Ajax midfielder Frenkie De Jong has confirmed he will remain at the club this season despite interest from Spanish champions Barcelona.

The Dutch outfit secured their place in the group stages of the Champions League with a 0-0 draw with Dynamo Kiev on Tuesday, having won the first leg 3-1 in Holland.

And highly-rated youngster De Jong was quick to make clear that he would be staying put for the upcoming campaign.

‘Maybe someday I’ll join Barcelona, but not this season,’ he told NOS. ‘I’m staying at Ajax. I think it will be a good year.

‘I’d love to play with Ajax against Barcelona. Our squad is good and we deserved to reach the group stage. Now we’re about to find out what we’re capable of in the Champions League.

‘It will be my first time (facing those big opponents), but I hope to draw a group with perspective to march on.’ 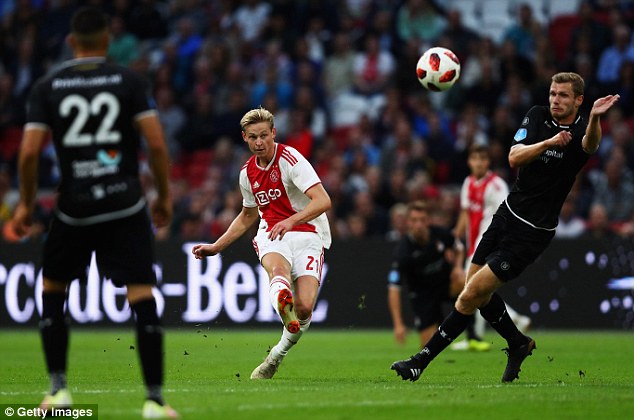