Frequent flyer Gilbert Ott, who flies up to 200,000 miles a year

Never put your valuables in the overhead bin on a plane. Why?

Travel expert and frequent flier Gilbert Ott, who runs the flight tips site God Save The Points, reveals all.

Along with 10 more personal flight ‘don’ts’, including arguing with cabin crew and drinking the tap water.

Writing on his site, Gilbert, who flies up to 200,000 miles a year, all over the world, warns that there are ‘actual crime syndicates that target overhead bins’.

He continues: ‘These groups wait until the lights are out when passengers are sleeping, and they make gut assessments about which bags may have a laptop, cash stash or something valuable. Too often, the person only realises what’s missing after the plane has landed.’

Gilbert, who lives between New York and London, says: ‘Cabin crew are not your enemy, even if they have power to trip on. Stay calm, know that even if they might be wrong, they run the show, and be the polite human you’re capable of being. Fights in the air mean planes get diverted, which means you may end up in a cold city when you thought you were going somewhere warm.’ 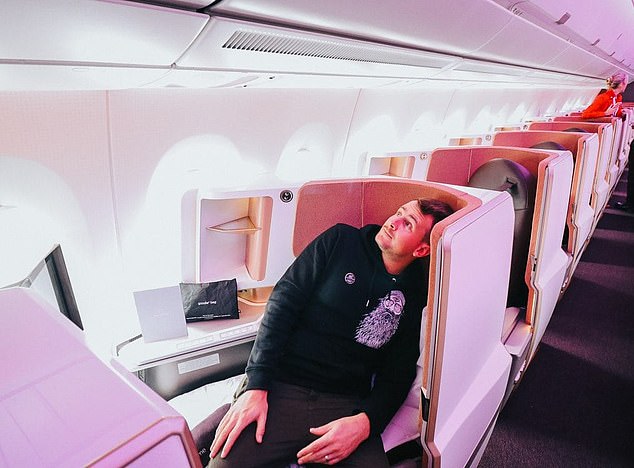 Gilbert, pictured, says: ‘Cabin crew are not your enemy, even if they have power to trip on. Stay calm, know that even if they might be wrong, they run the show’

Gilbert writes: ‘Airplane water tanks are Petri dishes, with water that’s been found to contain just about every bacteria and parasite under the sun. I wish that was a joke.

‘I don’t drink the tap water, or even use it to brush my teeth and neither should you. Bring a reusable water bottle and fill up in the airport, or use bottled if you must. No tap water typically means no coffee, tea or anything else that’s made with that water, just FYI.’

‘Airplane seats rarely get cleaned to the extent they should be, so how do you think the magazines fare?’ says Gilbert. ‘Think about hundreds of passengers every week putting their unwashed, sometimes greasy – or worse, germ-filled – hands all over each page.’

‘For once, and for all – it’s never ok to go barefoot on a plane,’ stresses Gilbert. ‘Socks, totally fine, but barefoot is not ok for you, or anyone else. Continuing the theme that planes are one of the most biologically terrifying places on and above the earth, any minor wounds could be exposed to potentially life-threatening bacteria.’

Don’t take your shoes off before take-off

‘A pilot once told me,’ writes Gilbert, ‘that one of the greatest mistakes a passenger can make is to take their shoes off before the plane successfully climbs into the sky, or touches down safely and comes to a halt. These are the two critical areas of flight, where the unlikely event of an emergency is more likely and if your shoes are off, you can get cut, trampled or immobilised because of it.

‘I always, always keep my shoes on until we’re a few thousand feet up in the air and make sure I’ve put them back on before the final approach.’

Don’t stay seated for too long

‘It’s crucial to get up, invigorate your body and promote good blood flow. Every day, somewhere around the world, a person picks up a potentially life-threatening blood clot from DVT [deep vein thrombosis],’ writes Gilbert. 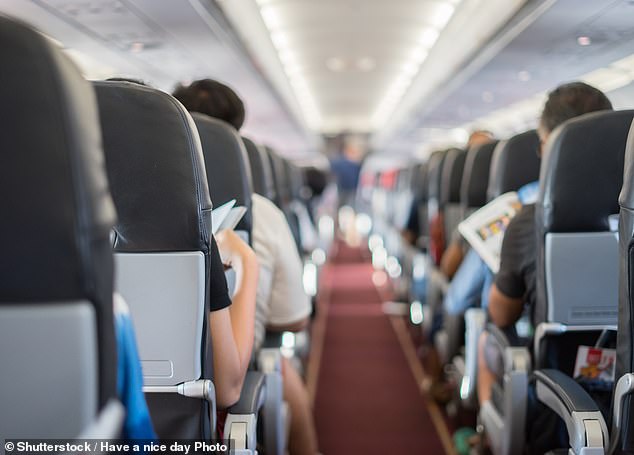 Gilbert writes: ‘Almost every environment in air travel is either too hot or too cold. Layers help prepare and plan for both, but can also provide a health benefit. I was on a show once with a leading scientist studying disease control, and he noted that pulling a layer above your nose and mouth in the immediate aftermath of someone sneezing can greatly reduce your risk of actually taking the germs into your airways.

‘Since learning that that’s scientifically true, I’ve always worn a hoodie, scarf or additional layer to quickly pop over my nose if someone is hacking away.’

‘Some airlines are awesome at stocking the latest releases, boxsets and classics, but others are simply terrible. Also, those screens are yet another Petri dish,’ warns Gilbert, ‘where people specifically tap away with their fingers, which may or may not have been in places you’d care not to know about. And no, the screens don’t get cleaned well, no matter what an airline may tell you.

‘If you’re going to drink on a plane, always drink at least equal, if not double the amount in water,’ urges Gilbert. ‘If you don’t drink alcohol, still ply yourself with the water. Air travel is incredibly dehydrating, which not only makes you feel sub-optimal, but also makes your glands more susceptible to picking up germs.’

Don’t touch anything you don’t need to

‘The more you self-cater,’ says Gilbert, ‘the more you control what you touch. I never reach too far down into a seat crevice, try to use a sleeve to tap or grab things that are part of the aircraft. I generally try to keep my hands away from any surface that might hold the thing that makes me every other passenger’s nightmare – a sniffling, coughing human seated within inches.’