Frequent flyers could be hit with extra charges as part of plans to tackle greenhouse gas emissions to meet climate targets in the UK, according to government advisers.

The Committee on Climate Change suggested the new levy among other options including changes to air taxation and airport capacity management to try to limit the surging demand for cheap flights.

Committee members said ministers should try to cut the amount of flights to no more than 25 per cent above current levels by 2050 as part of efforts to reduce the UK’s emissions to net zero by mid-century.

And it warned the Government that it needed to ‘assess its strategy’ on airport capacity to make sure future investments make ‘economic sense’.

The committee did not object to a third runway at Heathrow but added it would ‘leave at most very limited room for growth at non-London airports’.

The recommendations come in a letter from chairman Lord Deben to Transport Secretary Grant Shapps and also suggested including international aviation and shipping emissions in the UK’s targets to cut greenhouse gas emissions to zero overall by 2050.

The letter said aviation was likely to be the largest emitting sector in the UK by 2050, even with good progress on technology to provide greener fuels.

Lord Deben said including air emissions in the legally-binding net zero target will reveal the measures needed to remove carbon dioxide from the atmosphere to offset the emissions caused by flying.

As far as shipping is concerned, the committee said net zero was likely to be feasible and cost-effective through use of alternative fuels, such as hydrogen or ammonia. 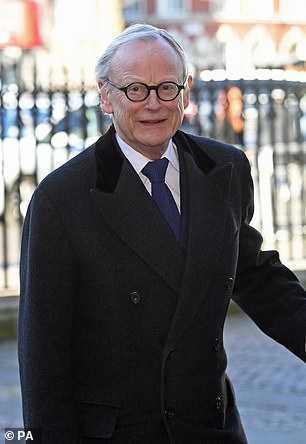 The committee is chaired by Lord Deben, pictured, who said the aviation industry is likely to be the largest cause of emissions by 2050

‘These are real emissions, requiring a credible plan to manage them to net-zero by 2050.

‘Their inclusion in the UK target will complement international approaches and increase confidence that the Government is prioritising their reduction, ensuring the net-zero target covers all of the UK’s emissions.

‘As the UK prepares to host the next major climate summit in 2020, we are well placed to show global leadership on this fundamental issue of international concern.’

Leo Murray, director at campaign group 10:10 climate action, said that aviation had been given a ‘free ride’ in climate policy for too long, with politicians putting it in the ‘too hard’ box.

He said the Government was talking up electric planes, which should be an innovation priority, but the potential for technology to contribute to carbon cuts in a short time frame was limited.

He added: ‘The CCC make it very clear that growth in demand for flights from UK airports cannot continue unchecked. That’s why we need to introduce a frequent flyer levy. 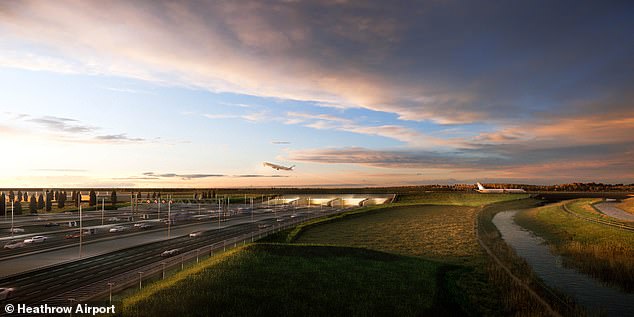 The committee did not object to a third runway at Heathrow, pictured in an artists’ impression, but added it would ‘limit growth at non-London airports’

‘Most of the environmental damage from air travel is caused not by annual family holidays but by very frequent leisure flights by those at top end of the income spectrum.

‘A frequent flyer levy is the fairest and most effective way to keep aviation emissions within safe limits, at the same time as protecting access to some air travel for all.’

Dr Doug Parr, chief scientist for Greenpeace UK, said the Government’s current aviation strategy is incompatible with the net zero target, ‘and must be revised’.

‘The new strategy must focus on restricting demand growth, and will either require Heathrow’s third runway being cancelled, or capacity restrictions on other airports to balance Heathrow’s expansion.’

A Department for Transport spokesperson said: ‘The fight against climate change is the greatest and most pressing challenge facing the modern world and this government recognises that aviation and shipping have a crucial role to play in tackling it.

‘The government has already made clear its commitment to zero emission shipping in the Clean Maritime Plan, which was published earlier this year. We are also committed to setting a clear ambition for the aviation sector and will carefully consider the advice of the Committee on Climate Change when we publish our position on aviation and climate change for consultation shortly.’ 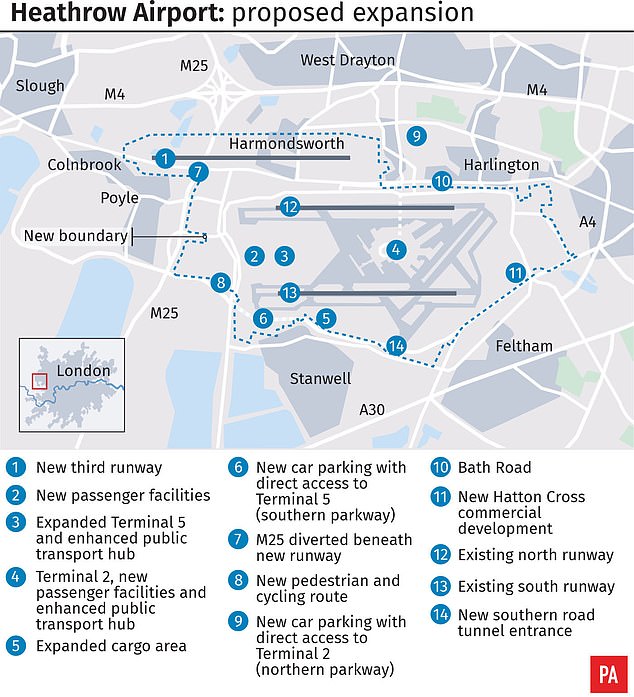 This graphic shows the various additions and changes to the site which are planned over the next few decades. Construction is expected to start in 2022, with the runway built by approximately 2026. New terminals will not be ready until around 2050