YouTube star Jordan Shanks has returned serve to John Barilaro hours after the Deputy Premier said ‘vile racism’ had contributed to his decision to quit politics.

Mr Barilaro said defamation proceedings he launched against the YouTuber, also known as FriendlyJordies, and Google played an enormous role in his decision to step down just days after Premier Gladys Berejiklian handed in her resignation.

He accused Shanks of spouting ‘vile racism’ marketed as journalism, noting the ‘disgusting, vile, racist commentary on social media has taken a toll’.

Shanks quickly prepared a statement which claimed Mr Barilaro used the press conference to ‘defame me as a racist’.

‘That in itself is a vile and offensive accusation about me that anyone following these issues can see straight through,’ Shanks said.

‘He dodged, weaved and bristled when asked about the substantive and serious allegations that our videos have exposed.’

The duo will go head-to-head in the Federal Court in a judge-only trial where Shanks has already indicated he will rely on a truth defence.

‘After a decade of proudly advancing his interests and blaming other people for his mistakes, what a fitting way to go out,’ Shanks said in the fiery statement.

‘He may be able to dodge questions in a press conference but I doubt he’ll be able to in a courtroom.’

Mr Barilaro will be represented by leading defamation barrister Sue Chrysanthou, SC and the matter is expected to return to court this month.

He said on Monday he hopes the matter will be resolved outside of the public eye and was outraged when asked who funded the legal challenge.

‘As a young boy with immigrant parents, I understood what racism was from a young age.’

Mr Barilaro acknowledged the ‘defamation case is playing a big role in this’ and said he felt for all the young boys and girls who endure social media bullying.

‘As a 49-year-old man, it has taken a toll on me… It was started by disgusting, vile and racist commentary disguised as journalism… And that’s why I’m calling out Google, they’ve allowed this to happen.’

The father-of-three is proud of his Italian heritage and the sacrifices his parents made for him growing up, citing his late father as his ‘biggest inspiration’ for getting into politics.

Mr Barilaro’s father, Domenico, died in 2020 after a long-fought battle with diabetes.

‘Though he was a strong man the end was grim, with his part of his leg amputated, we watched him die in excruciating pain,’ Mr Barilaro said when justifying his support for an assisted dying bill.

‘I’ve said in my inaugural speech to Parliament that dad was my hero and I said it during my eulogy.’

On Monday, he said his decision to retire from politics felt like a ‘final goodbye’ to the man who first inspired him to enter public service.

Shanks’ supporters were quick to throw their backing behind the YouTuber, who also recently called outgoing Premier Gladys Berejiklian a ‘koala killer’.

Ms Berejiklian’s bombshell resignation was announced at 1pm on Friday, immediately following the new the Independent Commission in Corruption had launched a probe the dealings she had with her disgraced ex-boyfriend Daryl Maguire MP.

Huddled with her closest allies and friends, the NSW premier almost decided to defiantly weather the storm before she ran out of options.

Then she stood up in front of TV cameras and, barely holding it together, announced she was stepping down and quitting parliament.

The ICAC will look into whether she breached public trust by not reporting suspicion of corrupt conduct of former boyfriend Daryl Maguire.

There will be consideration into what role, if any, she played in two government grants handed out in Mr Maguire’s electorate.

In August it emerged that Ms Berejiklian showed ‘interest’ in a proposed $5.5 million grant for a shooting association clubhouse and conference facility in her former lover’s electorate, documents show.

But the ex-premier continues to insist she’s done nothing wrong.

The public inquiry on the matter will be held for about 10 days from October 18, overseen by Assistant Commissioner Ruth McColl SC. 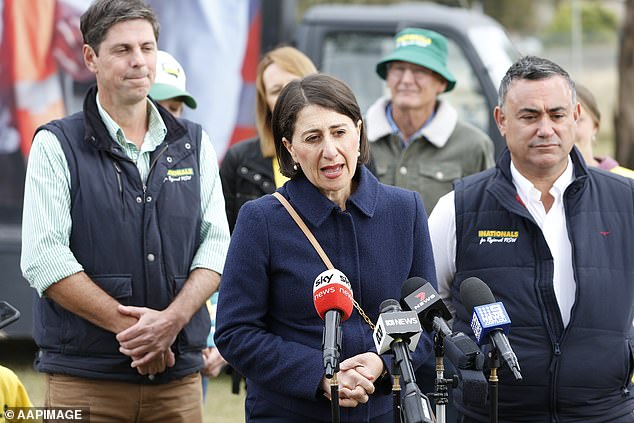 ”When I said politics is stuffed in this country, and some of the people in it need to have a long hard look, I meant it. I hadn’t signed up to contest federally to be called that type of smear,’ he said at the time.