Hatice Cengiz weeps at the memorial in London on Monday night

The friends and fiancee of murdered journalist Jamal Khashoggi paid tribute to him and called for Saudi Arabia to return his remains during an impassioned memorial service in London.

‘He wrote what he believed in, not what would please the powerful. He was a voice for the voiceless,’ she added.

‘If I only knew what would happen I would have entered the consulate myself. If I knew that was the last time I would see his smile, hear his laughter, I would stood in front of that death squad myself.’

‘Jamal is a martyr for a cause. He is a martyr for the struggle for democracy and freedom in our part of the world. I want to bury my beloved Jamal. I am asking again, where is his body?’

Other speakers at the event slammed the Crown Prince Mohammed Bin Salman for being a ‘toxic influence’ and likened him to Isis. 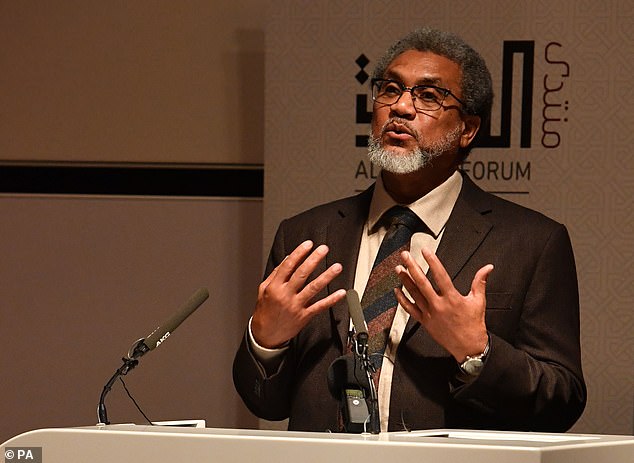 Dr Daud Abdullah, head of Mid East Monitor, pleaded with Saudi Arabia to hand over his body in his speech

Khashoggi’s murder has sparked international condemnation as Saudi Arabia’s initial claims it had nothing to do with his disappearance at their consulate in Istanbul last month were proven false by Turkish investigators.

The Kingdom eventually relinquished claims Khashoggi had left the building unharmed and admitted he had been killed after he entered the complex.

His body is yet to be recovered by authorities, leading to calls for Saudi Arabia to cooperate with investigators so that he can receive a full burial.

Speaking at the memorial on Monday, Dr Daud Abdullah, the head of the Middle East Monitor, pleaded with the Saudis to hand over his body, saying: ‘Everyone deserves that right.’

Abdullah also called Khashoggi ‘a true Saudi patriot’ who ‘will not easily be replaced.’

Human rights activist Sarah Leah Whitson demanded a full international investigation into death which she says was planned and executed on MBS’s orders.

Whitson also called on western governments to properly punish Saudi Arabia before imposing sanctions on the Crown Prince himself.

She called for Mohammed Bin Salman to step down as the country’s ruler, arguing he was ‘poisonous’ and the country’s ‘biggest liability in years’.

In an emotive send-off tribute to Khashoggi, Whitson added: ‘You are the Saudi man who would not bow down, who paid for his freedom with his life. You have given your people a hero.’