After a teenager’s terrifying seizures caused her to miss her senior prom, her friends jumped into action to give her a celebration she would never forget.

In a powerful post on Love What Matters, Bonaire, Georgia, mom Margie Johnson tells the story of her daughter Kiersten, who suddenly started having seizures when she was just 15 years old.

Margie explains how the first one happened on November 14, 2015, while Kiersten was at her friend Abby’s house. After dialing 911, the shocked friend called Margie to tell her what happened.

Mom and daughter: Margie Johnson (left) has revealed how her daughter Kiersten’s seizures caused her to miss her senior prom – and how her friends saved the day Hard days: In a powerful post on Love What Matters, Margie describes how her daughter started having seizures back in 2015 and doctors struggled to figure out what was wrong 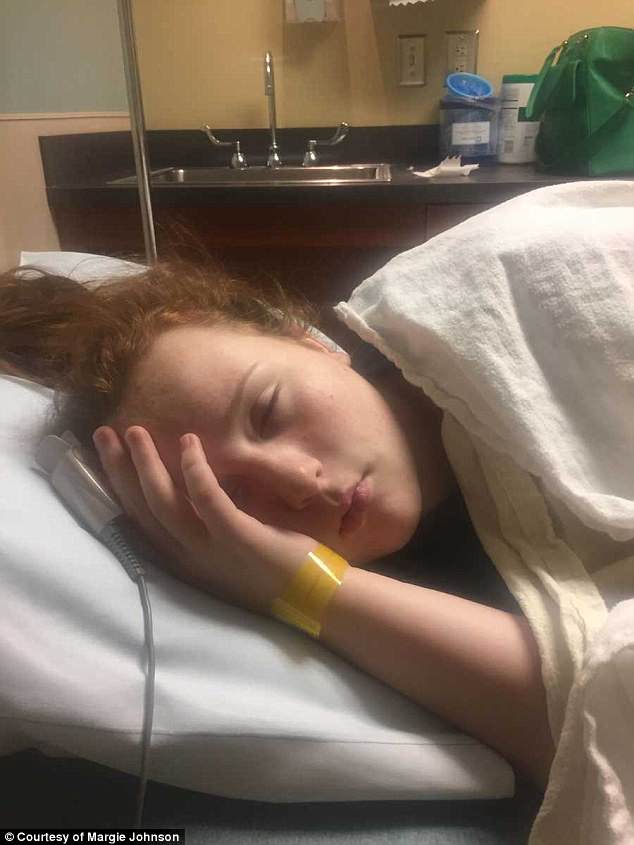 Treating the problem: She was initially given medication for epilepsy, but Margie claims the drugs left her ‘a shell’

‘My response to her, “Abby, quit playing around!” She passed the phone to her mother Tracie who proceeded to tell me that Kiersten did, in fact, have a seizure and that they had called for an ambulance and could I come quickly,’ Margie writes.

At the hospital, the doctors ran a number of tests, all of which came back normal. They guessed, Margie says, that it was a ‘fluke’ and a result of the teenager staying up too late.

But it wasn’t a fluke. Two months later, Kiersten had another seizure, and this time mom was there to witness the whole thing.

‘Early one morning in January 2016, she and I were getting ready for school/work and while in my bathroom she kept having these bizarre arm jerks,’ Margie remembers. ‘She would be brushing her hair one moment and the next her arms would be jerking up and out.

‘I remember her saying she could not control them as I stepped into the shower. Moments later, I heard a thud. I threw open the shower curtain to my 15-year-old daughter convulsing on the floor and I lost my mind.’ 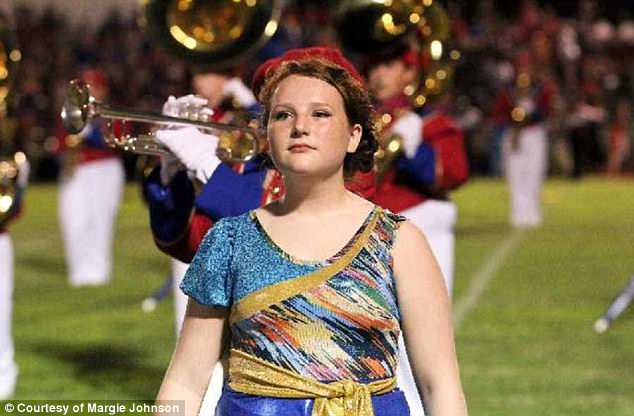 Former passion: Kiersten was a member of the Color Guard before her seizures started 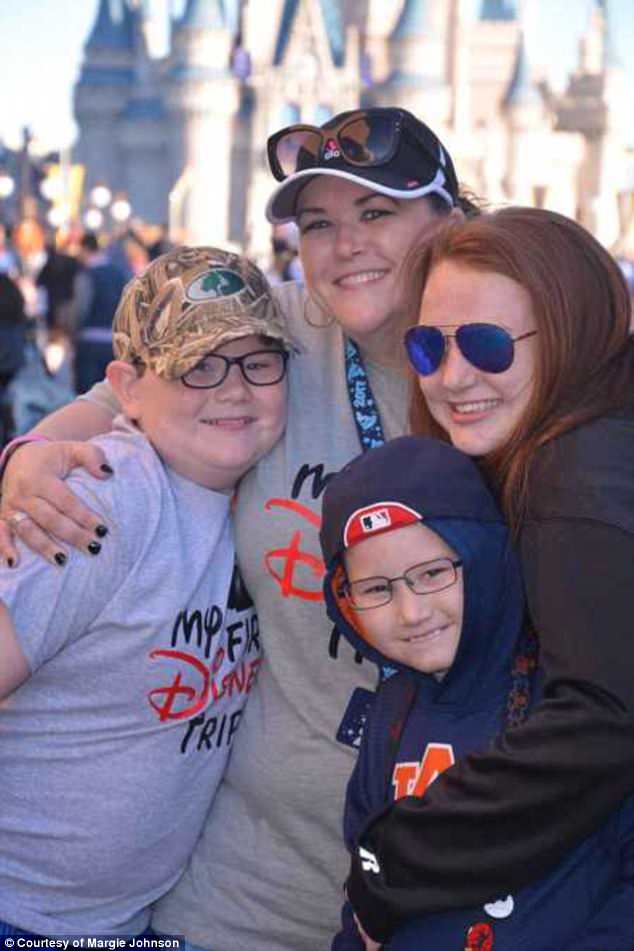 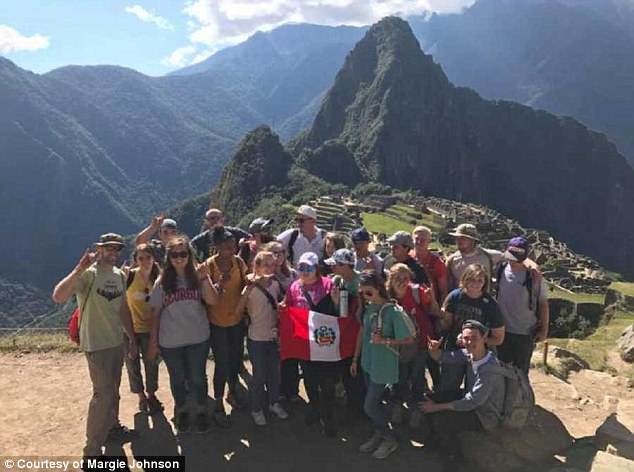 More troubles: She suffered another seizure while on a missions trip to Peru with her church

Margie grabbed a towel and dropped to the floor screaming. The noise attracted Kiersten’s brother Clark, then only 10 years old, who called 911.

The paramedics arrived and Margie collapsed. She remembers: ‘My mind could not reconcile what my eyes had seen. The way my precious daughter looked on that floor. Her face frozen with the look of fear, as if it were her last emotion as she fell backwards.’

At the hospital, the tests were normal again, leaving no explanation for the episode. She was given medication to keep future seizures from happening, but the drug left her a ‘shell of herself’ and plagued by depression for the next year.

Eventually, Margie decided that there had to be another way. In December of 2016 she took Kiersten to Atlanta’s AMEN Clinic to undergo a series of brain scans, which eventually found that she had Generalized Anxiety Disorder and PTSD. The seizures, the doctors said, were panic attacks that looked like seizures.

She was taken off the epilepsy drugs and put instead on anti-anxiety medication. Things seemed to be going well until she had another seizure while on a missions trip to Peru. A month later, she had another panic attack/seizure after crashing a car into a stop sign, breaking her nose. She broke it again in October when a seizure saw her fall down the stairs. 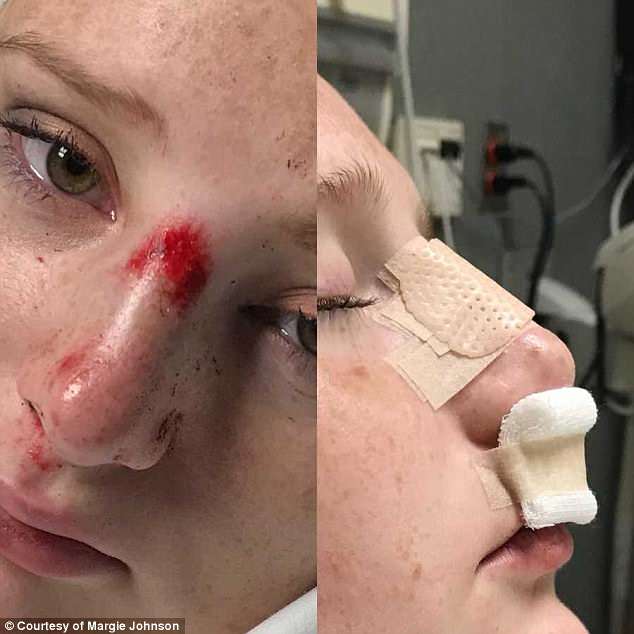 Scary moment: Kiersten broke her nose after crashing her car into a stop sign and suffering a seizure as she got out 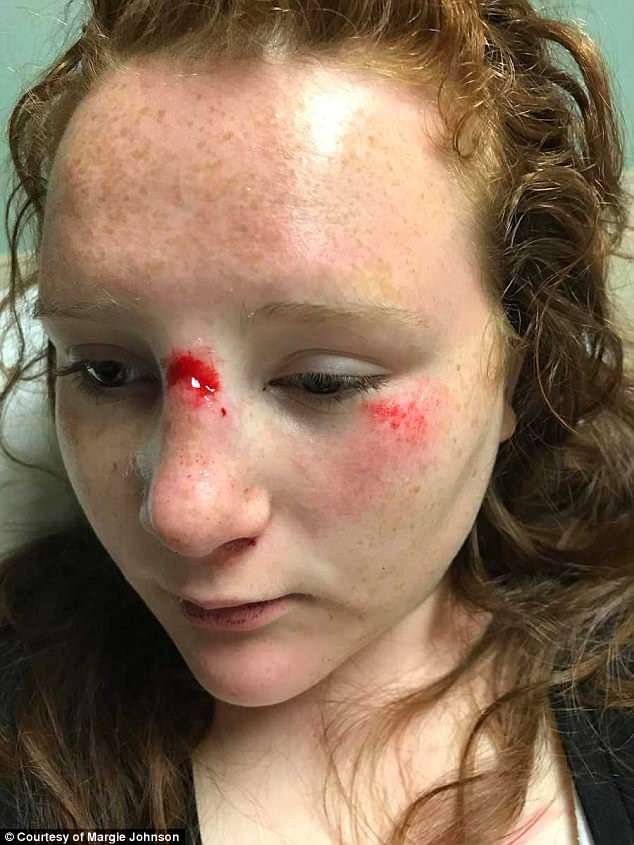 Again: A tumble down the stairs while seizing result in yet another broken nose Looking for answers: Margie thought that certain foods were setting her daughter off so she they went to get her an allergy skin test 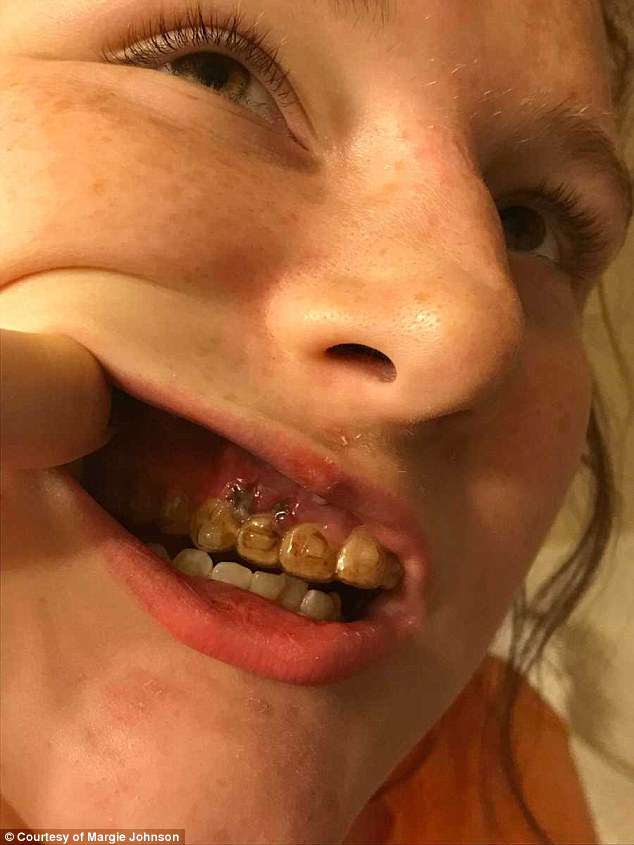 Ouch: Soon after the test – and the day before prom – Kiersten suffered a serious seizure, slamming her face into the floor and causing damage to her teeth and gums

But despite these incidents, Kiersten’s treatment seemed to be progressing thanks to breathing exercises and medication. After the October seizure she went months without another, but the arm twitches would still sometimes appear.

‘I started to notice that her arm twitching came more consistently around times that she would eat certain foods,’ says Margie. ‘I can remember telling her not to eat something she had brought home from a fast food restaurant. I told her, “If you eat that you are going to have a seizure.” She had a seizure the next day. It was April 5, 2018. I decided then that I would have her doctor test her for food allergies.’

Prom was on the way, which meant that Kiersten was less than impressed with the marks left on her back from the allergy skin test. In the end, the doctors found that she has allergies to eggs, wheat, dairy, and nuts. For the next week, the teen was left feeling terrible.

Then, on April 20th – one day before her senior prom – Kiersten had another seizure. The arm twitches came and Margie told her to lay down as she snatched up some towels in preparation.

‘As I grabbed the last towel and turned towards her she went rigid, her body throwing itself upwards and then forwards, crashing down hard, face first onto the tile floor,’ Margie writes. ‘It was the sound that stopped my breathing. I froze. My mind imagined every bone in her face was crushed.’ 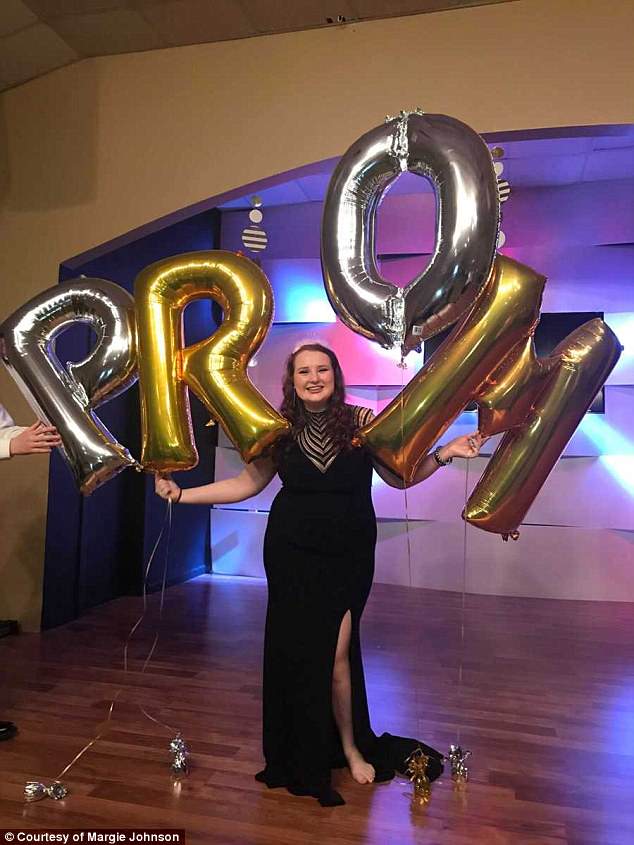 Pulling through: Days later, one of Kiersten’s friends reached out to Margie asking to throw her a personal prom 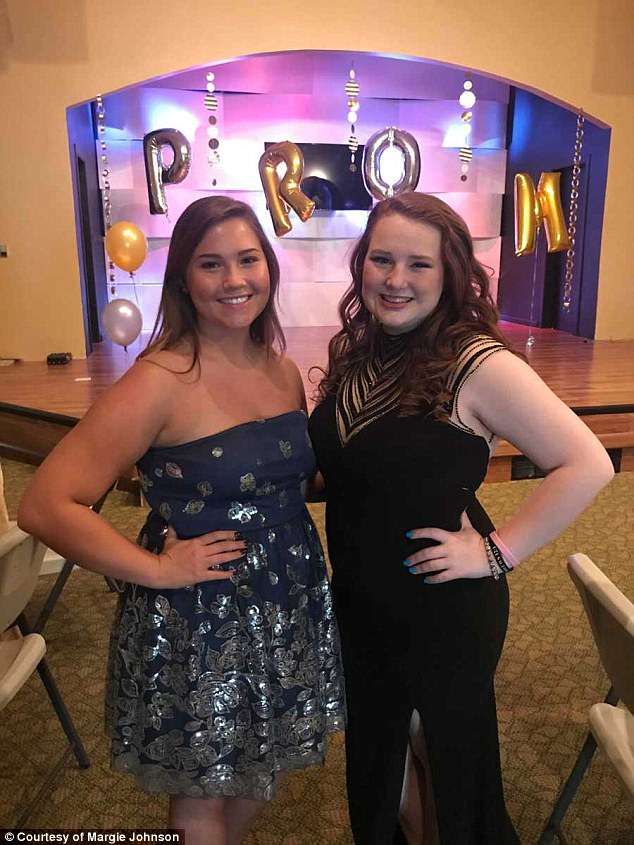 Her day: After a few weeks of planning, the surprise was a huge success, with Kiersten looking every inch the prom queen in a gorgeous black gown 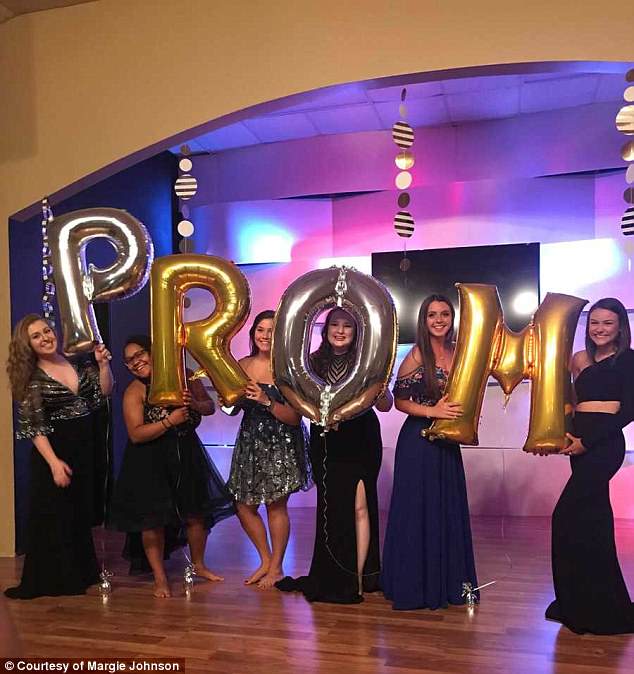 So loved: Margie writes about how she was ‘overwhelmed with emotion’ by the gesture

It wasn’t her whole face, but the teenager’s teeth had shifted and her gums were split open. A dentist came and worked to reset her teeth, but it was clear that Kiersten was in no state to go to her prom.

‘Grieving yet another loss. She and I both cried a lot that weekend. We shared anger and frustrations as we talked about her future,’ says Margie.

A few days later, one of Kiersten’s friends reached out to Margie on social media, saying: ‘She felt terrible Kiersten had missed her senior prom and how she wanted to put together a surprise Prom for her with all of their friends.

‘She asked if that would be ok with me. I was overwhelmed with emotion. I could not believe this precious girl would think to do something so very thoughtful and selfless for my daughter. ‘

After a few weeks of planning, Kiersten was surprised with a decorated room full of her friends and family for a prom just for her.

‘I then stood there and watched her walk through those doors and see with her own eyes what people did for her, because they love her,’ Margie writes, sharing photos of her daughter looking stunning in a floor-length black gown.

‘I acknowledged that even in our darkest days, we have so much light surrounding us. My momma heart was overcome.’