This is the bizarre moment a frog decides its eye are bigger than its stomach as it tries to swallow a giant moth – before it escapes from its mouth.

Footage shows the gruesome moment a green frog in Florida clings to a window pane as two large moths wings protruding from its mouth.

Screams can be heard as the frog tries in vain to gobble up the moth whole as its wings flap desperately.

One person can be heard screaming:  ‘He’s about to throw it up!’

While another person shouts: ‘Is that his tongue or is that the bug?’

Black legs can be seen flicking out of the frog’s mouth as the moth tries to pry its jaws open to be set free.

But the frog uses it’s tongue to try and twist the moth back into its mouth and clamp its jaw shut.

Suddenly the moth manages to break its head from the frog’s grasp and haul it’s body from out of the its stomach. 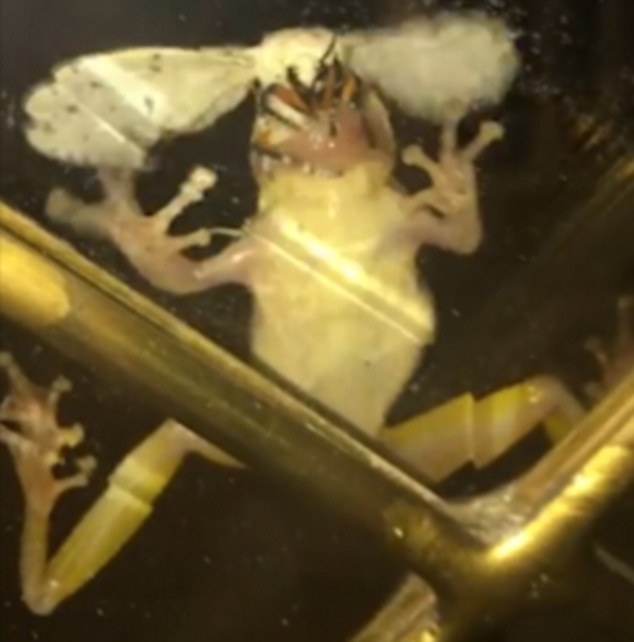 The frog decides it is too full for dinner as it’s regurgitates the giant moth.

Screams and gasps can be heard as the moth emerges- and turns out to be the same size as the frog.

One person can he heard saying: ‘Look how big it is. It’s as big as he is!’ 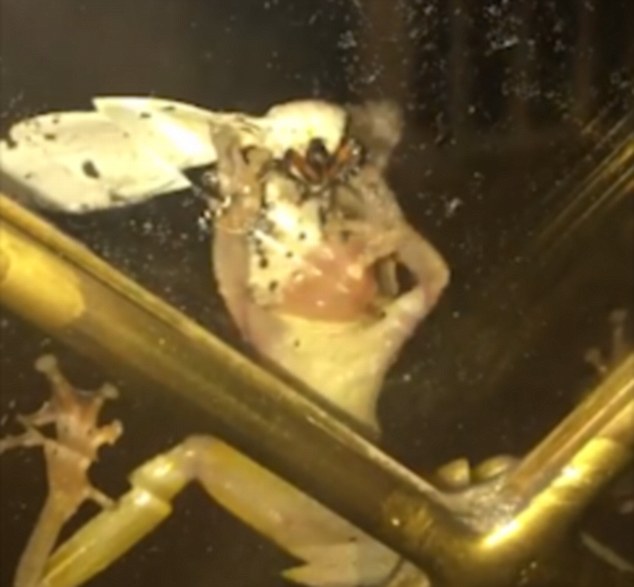 Those filming the bizarre video joked that the moth would turn on the frog and decide to eat it instead.

But the moth breaks free and falls off the window to safety.

This comes after an eerie video captured a frog that had eaten a firefly firefly glows from inside the stomach of a frog that has just gobbled it up.

The hungry frog, recorded clinging to a wall in Nashville, US, illuminates the room as the firefly continues to glow from inside its belly.