From ancient pyramids to luxury beaches: Incredible pictures show Egypt in all its glory

These incredible pictures show this side to its allure – and much more. They also underscore how Egypt has become an exotic modern holiday destination, with stunning beaches and eye-catching luxury resorts. There is also some truly bizarre geology to behold.

The awe-inspiring pictures are all from a new book in Amber Books’ Visual Explorer Guide series called Egypt, by Trevor Naylor. Among them are snaps of the mighty pyramids of Giza, the intricate tomb of Tutankhamun, the stunning marina of Port Ghalib as well as the beautiful Al-Azhar Park in Cairo.

Trevor said: ‘Egypt’s allure comprises a wide mixture of historical and cultural attractions, as well as beach-side holidays and the nation’s greatest asset, its friendly and fun-loving people.’

Scroll down to see MailOnline Travel’s pick of the 200 fascinating images that appear in the book, with captions courtesy of the author…

The Pyramids of Giza stand alone as the last remaining monument of the Seven Wonders of the Ancient World. Having stood for 4,000 years under the blazing sun, these monuments to the Old Kingdom pharaohs, Khafra (back) Khufu (centre) and Menkaure (front) are a lasting testament to the skilled labour of the thousands of workers who toiled at this site

The Sphinx and the Great Pyramid, Giza 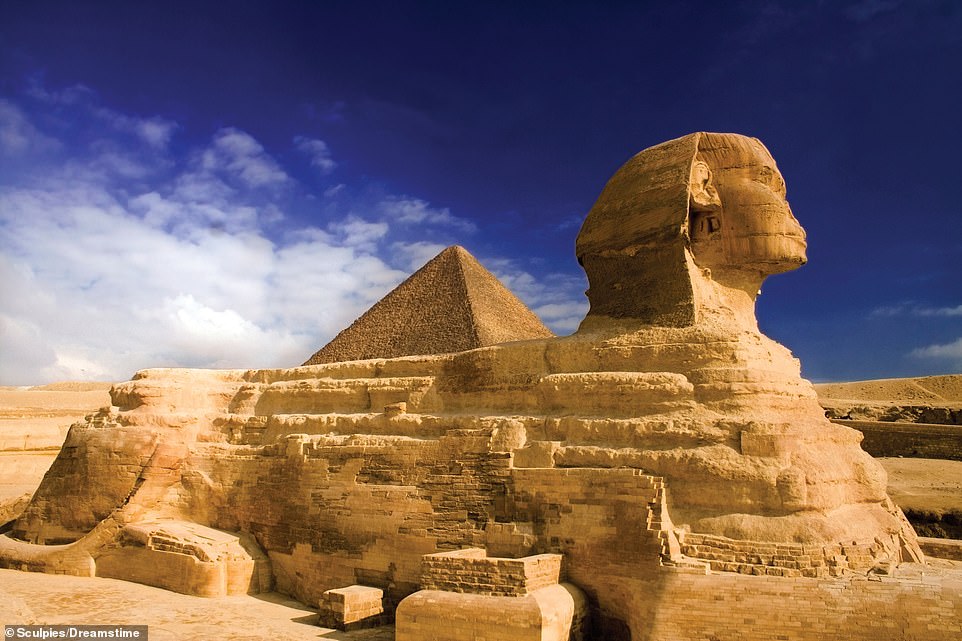 This iconic view of the two star attractions of the Giza plateau shows the Great Pyramid, created for the Pharaoh Khufu, standing behind the Great Sphinx of Giza. The Sphinx is believed to have been built for the Pharaoh Khafra, who constructed the second Giza Pyramid 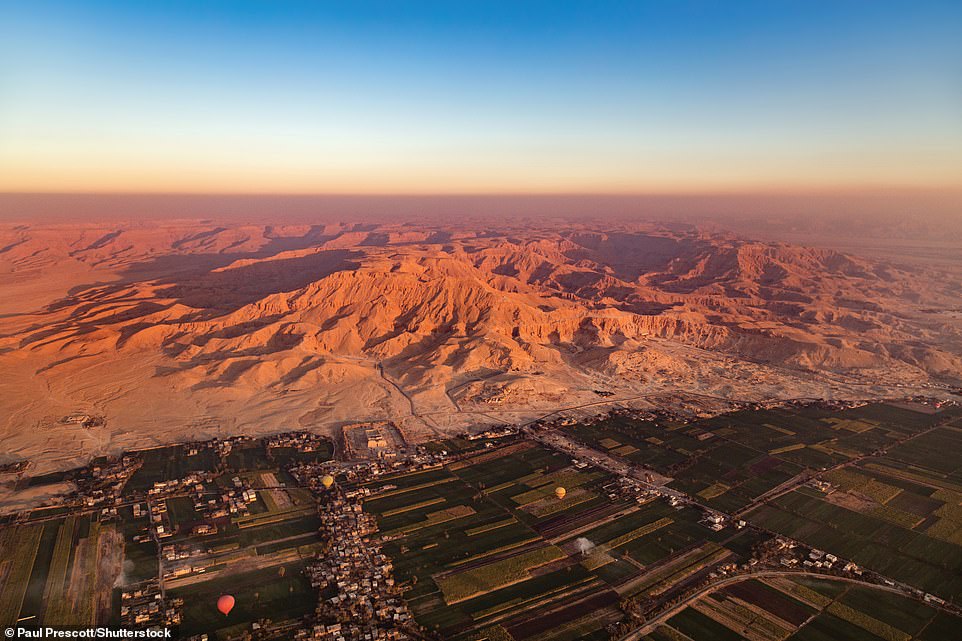 The burial place of many pharaohs and nobles of the New Kingdom era lie on the west bank of the Nile at Luxor (Thebes). These tombs are in several areas including the Valley of the Kings and the Valley of the Queens. There are 63 tombs in the Valley of the Kings, dug over a period of 500 years between the 16th and 11th centuries BC. Hiding their treasures in these desert hills did nothing to deter tomb robbers who stole much of what was buried alongside each sarcophagus 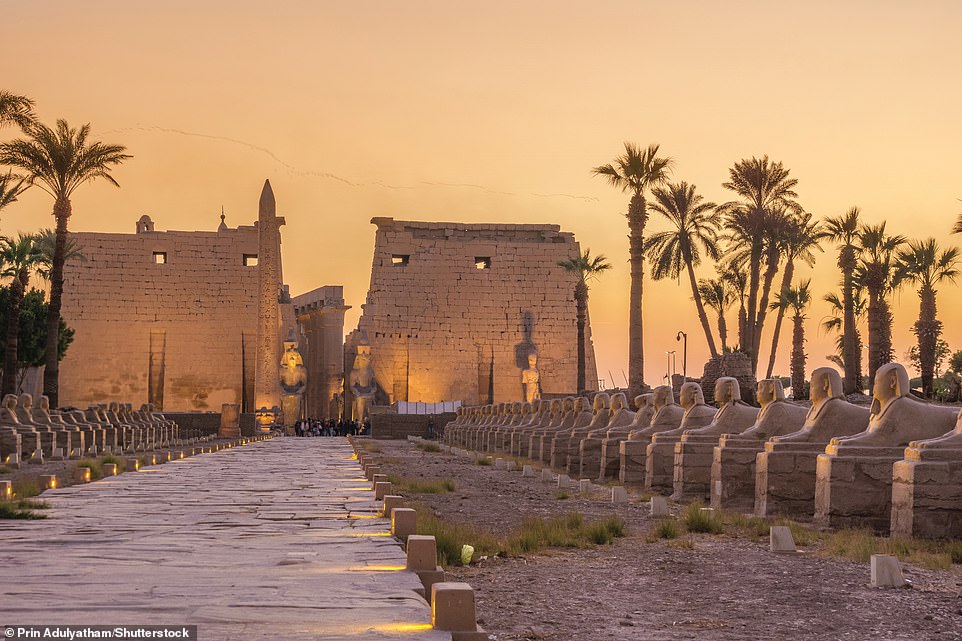 Luxor Temple comes as a sudden surprise to new visitors as it sits in the very centre of Luxor town itself. With the Nile on one side and the town square on the other, it is impressive and statuesque in its setting. Here we approach the first pylon from the Avenue of the Sphinxes and are met by the Luxor Obelisk built by Ramesses II. The twin of which is now in Paris

Tutankhamun, The Tomb, Valley of the Kings 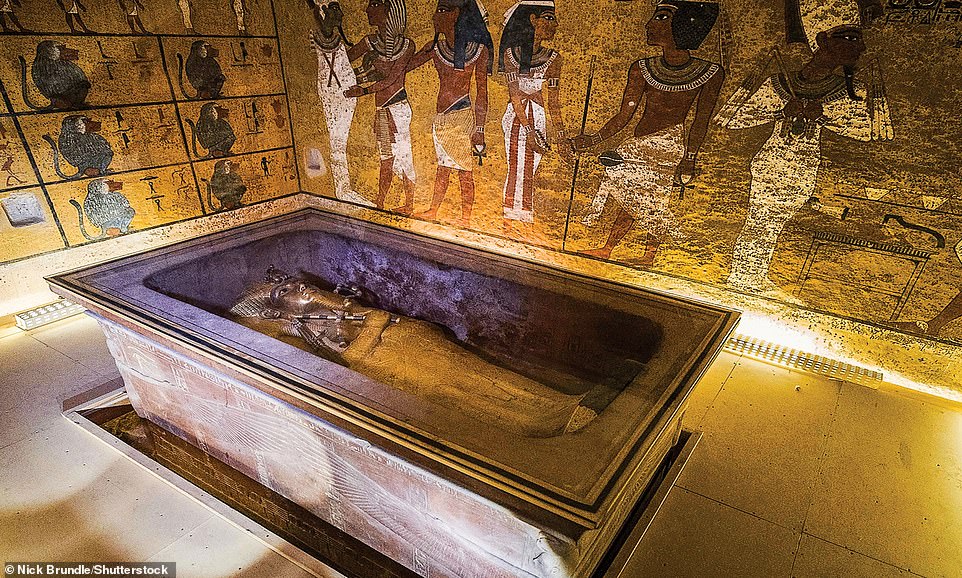 Tutankhamun died aged 19 and was hurriedly buried. His tomb in the Valley of the Kings has recently reopened after years of restoration work

The two giant temples of Abu Simbel were saved by a Unesco project from being lost under the waters of Lake Nasser by the building of the Aswan High Dam between 1964 and 1968. Sitting in majesty in the Nubian landscape, the Great Temple of Ramesses II (left) and the Small Temple (or Temple of Hathor – right) lie some 174 miles south of Aswan overlooking Lake Nasser 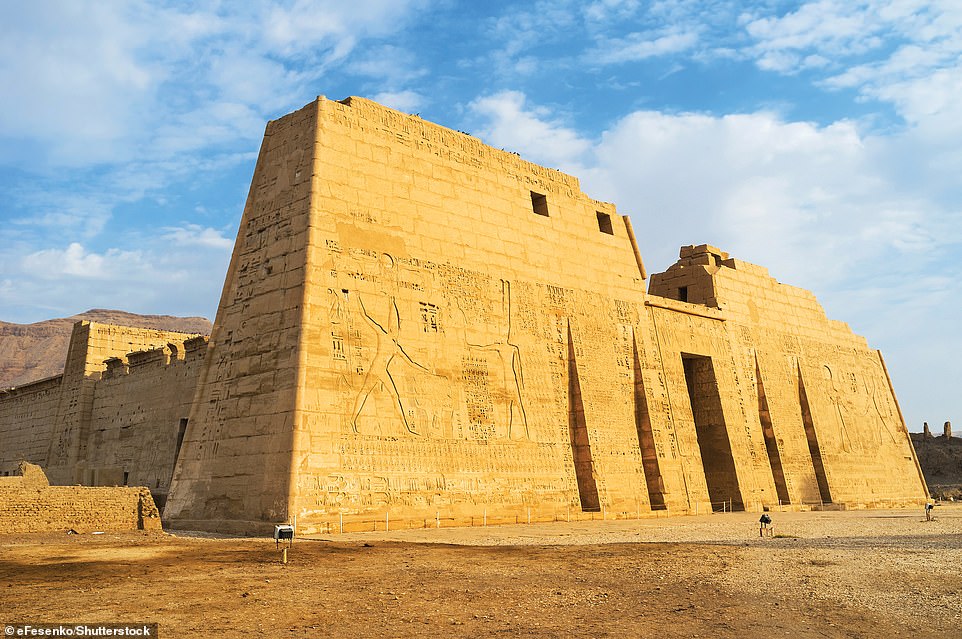 The first pylon of Ramesses III memorial temple at Medinet Habu is a gateway to one of Egypt’s most fascinating sites. The Temple of Amun within the complex was built by Queen Hatshepsut and Thutmose III and is one of the earliest places devoted to that local god. Medinet Habu was later greatly enlarged by the construction of the Funerary Temple of Ramesses III 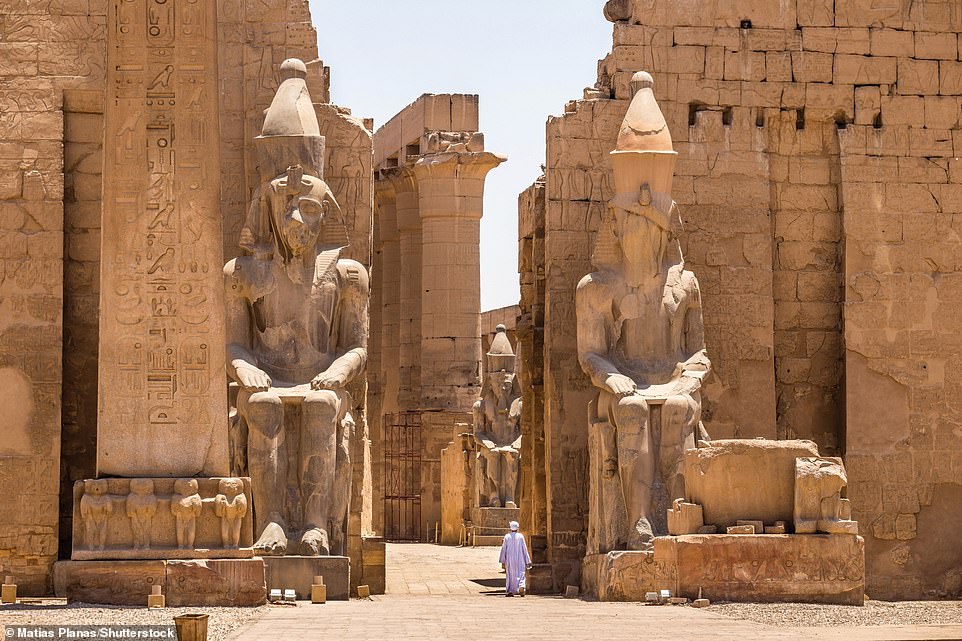 The statues at the Temple of Amun-Ra in Luxor. Trevor said: ‘All around the Nile, towns, temples and commerce developed hand in hand to build a successful society’ 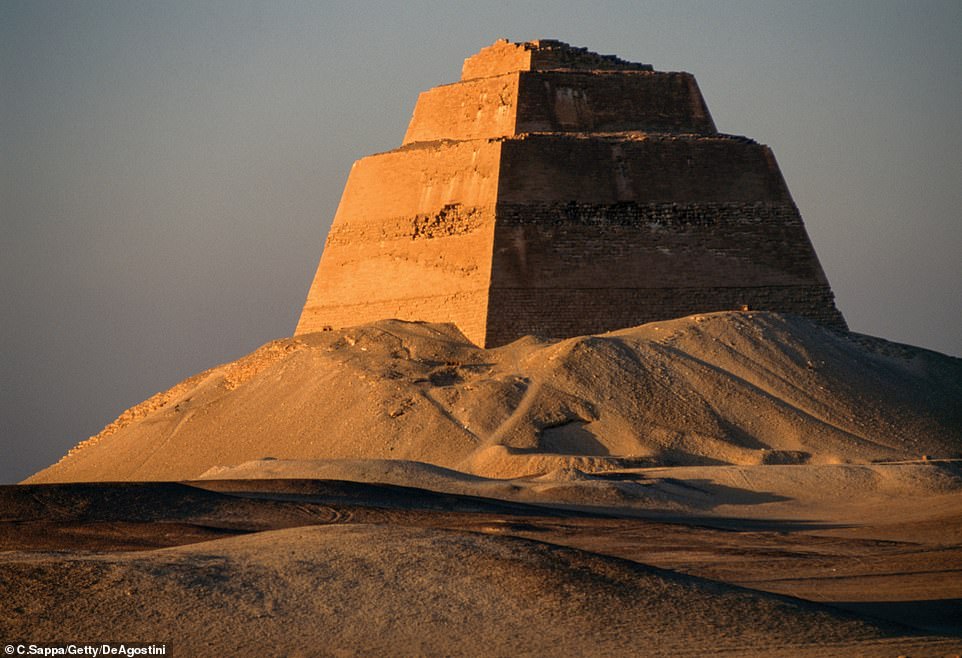 This fascinating addition to Egypt’s skyline was perhaps the next attempt at pyramid building after the Step Pyramid of Saqqara. It was something of a failure, thanks to a mixture of poor design, poor construction, and a bad choice of materials for its outer covering 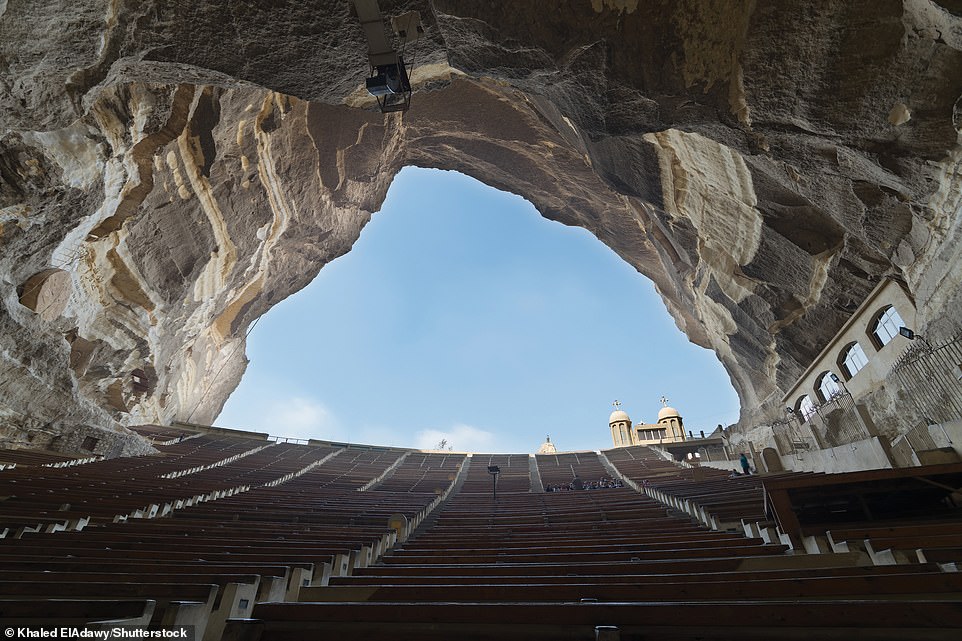 This vast cavern was dug from the Mukattam hills through the hard work and commitment of the zabbalin Christian community. It is now the single largest church in the Middle East, hosting congregations of up to 20,000 people. A visit to this area involves a complicated drive and steep climb, but it is more than worth the effort to see this fine example of pure devotion 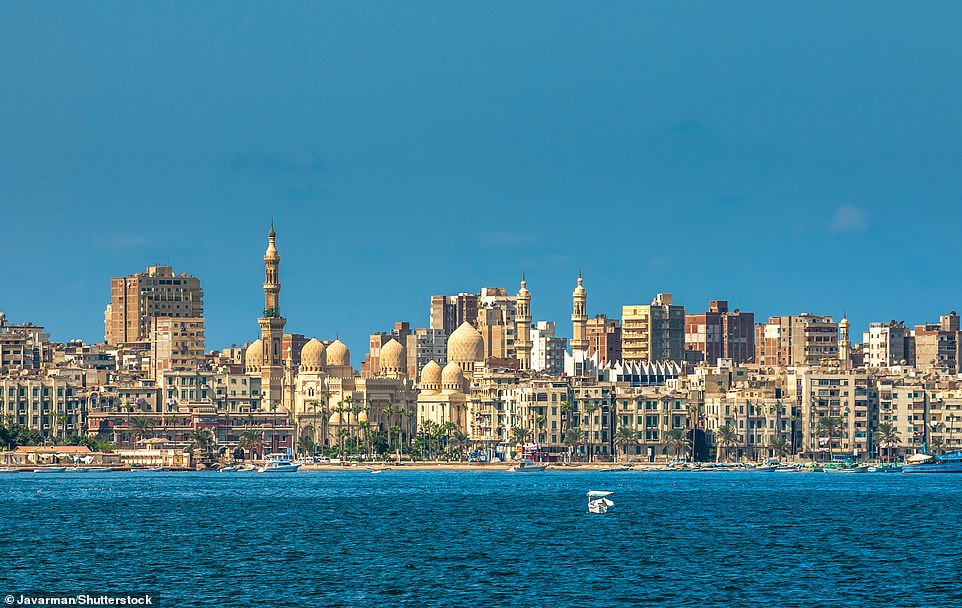 The harbour and the Corniche of Alexandria represent Egypt’s geographic connection with the Mediterranean and classical history, which made Alexandria the greatest city of ancient times 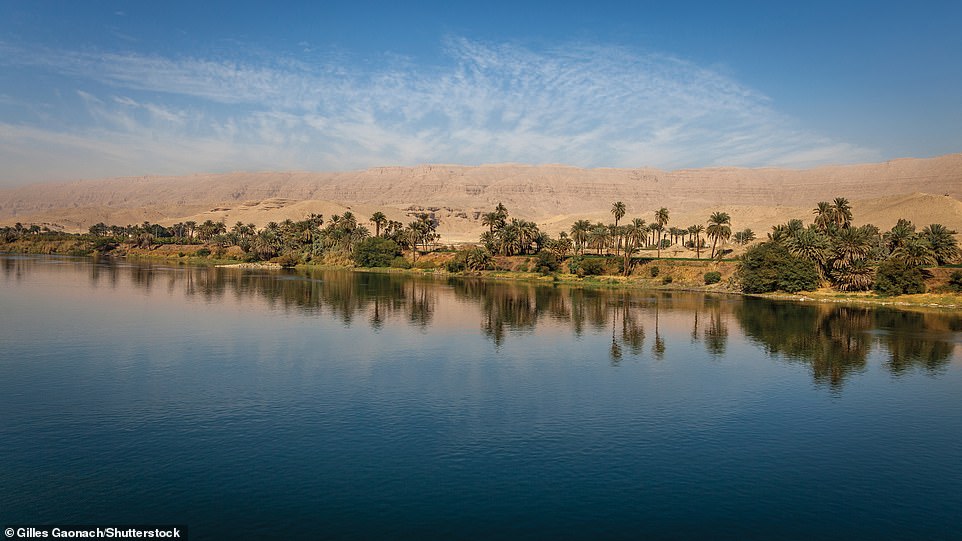 The Nile is the world’s longest river and as it flows through Egypt, its waters play as vital a role today as they did for the people of Ancient Egypt. The fertile valley which runs from south to north can be seen here outlined by the barren desert beyond. Egypt’s dependence on this river has been recognised and recorded by many writers and historians. Visiting Egypt more than 2,500 years ago, Herodotus called the country ‘The Gift of the Nile’

The Saladin Citadel of Cairo

The Citadel built by Saladin in the 12th century still dominates the Cairo skyline. Within its walls, there are three mosques and three museums to enjoy, as well as gardens. The Citadel’s chief attraction is the stunning view it provides of the city. There is a sweeping panorama of Islamic Cairo which sits below the Citadel and leads the eye to the modern city beyond. On the distant horizon sit the Pyramids

Port Suez and the Suez Canal 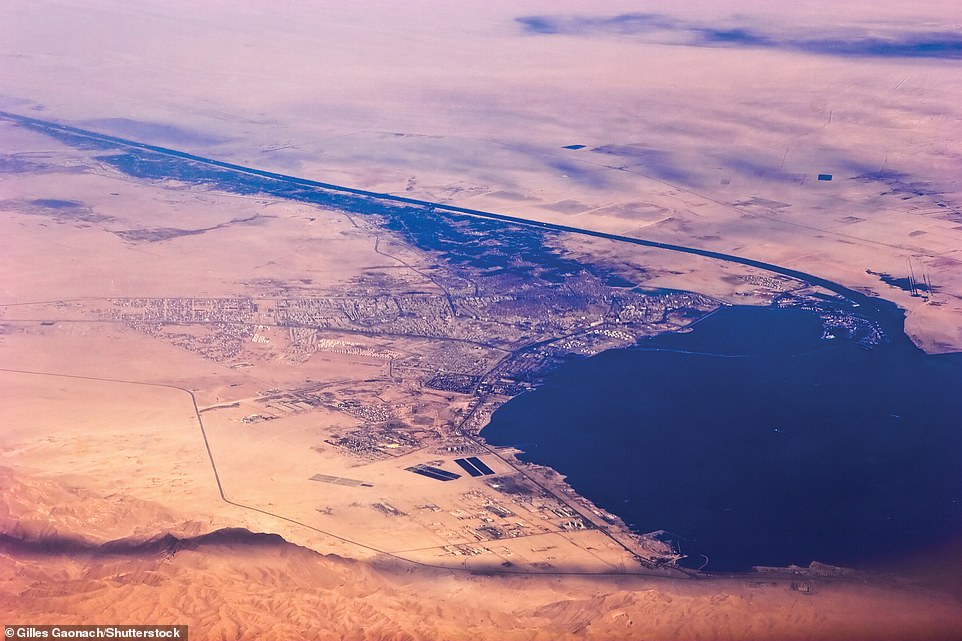 The Suez Canal is a vital artery for shipping. Its position connecting the Red Sea to the Mediterranean allows cargo and cruises the chance to avoid the long and expensive sea journey around Africa. Here we see the southern entrance which connects with the Gulf of Suez near Suez Port 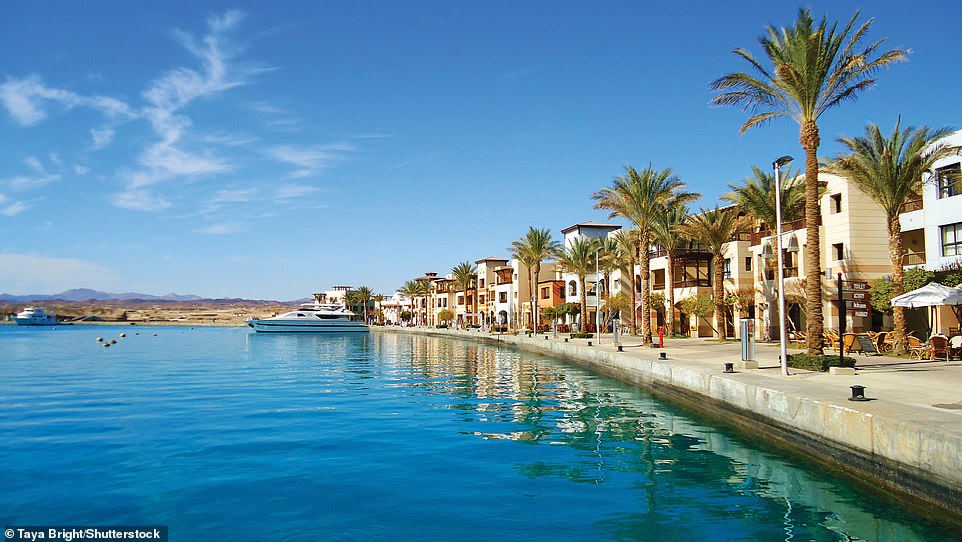 Close to Marsa Alam’s airport is the newly established tourist resort and marina complex of Port Ghalib, a miracle in the desert. The brainchild of a billionaire Kuwaiti businessman, Port Ghalib was created from nothing to become one of the New York Times’s must see-destinations worldwide 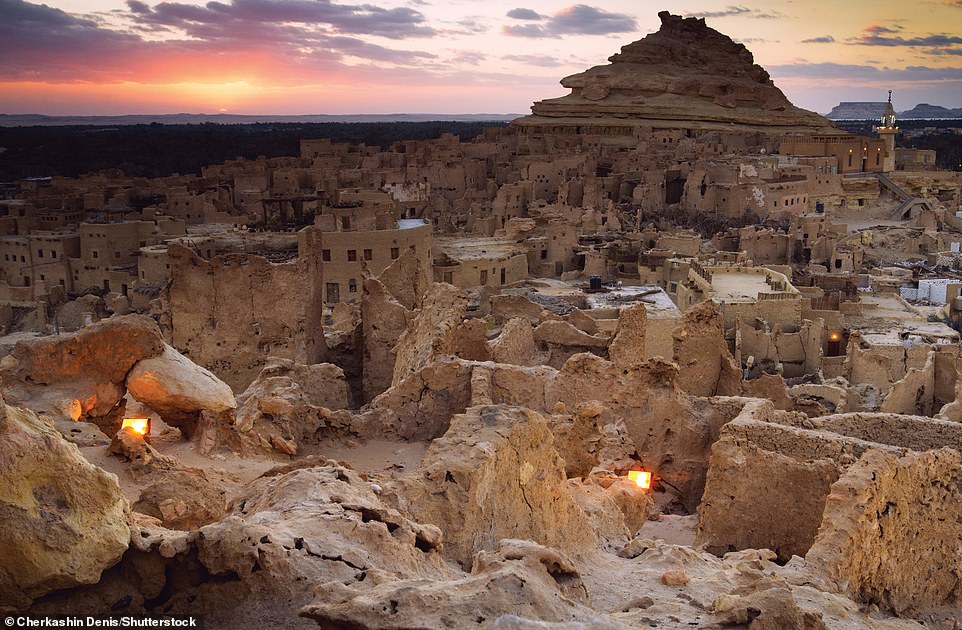 The heart of Siwa town is dominated by the quite spectacular shape of the Shali, which fills the skyline with a shape very different from most buildings of the past. This area was the original fortress of the oasis and what you see are the remains of a 13th-century bastion. These unplanned, uneven mud-brick rooms and homes were up to five storeys high and housed thousands of Siwans. They were a remote group of oasis dwellers with their own language and distinct customs and traditions, many of which live on today in what is a distinctly conservative area

The White Desert is part of the Farafra depression and its landscape, fauna and geological features are excellent for photography, walking and driving. The shapes of the outcrops and the land, created by wind erosion from what was once was an ancient sea bed, create the effect of being in a vast, natural sculpture park 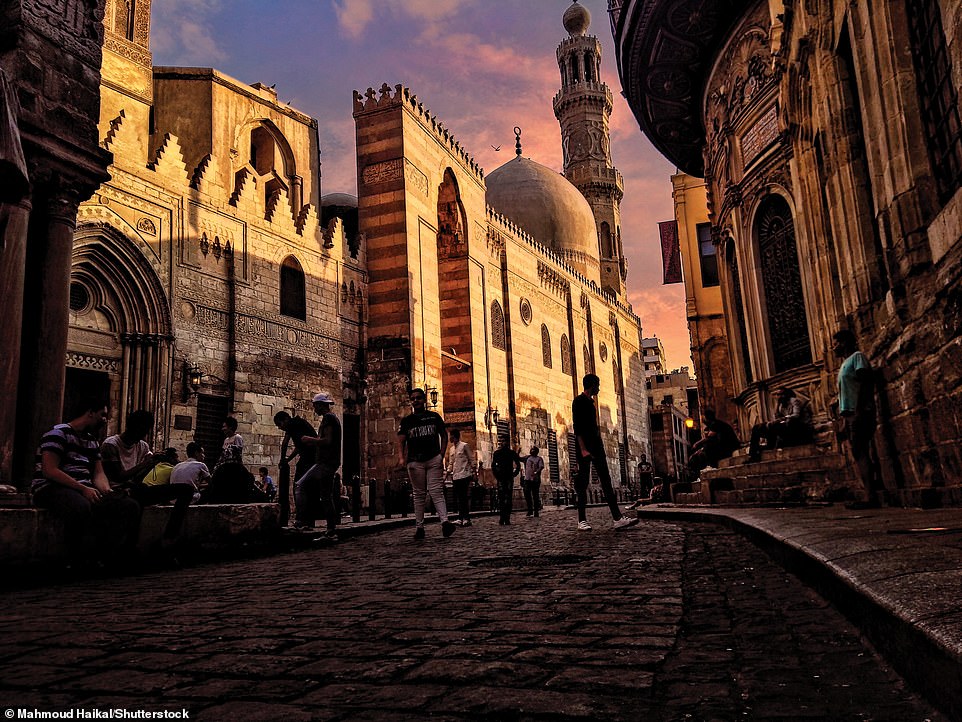 At night, the backstreets of Islamic Cairo evoke scenes from the works of the Egyptian writer Naguib Mahfouz, who made this area famous in a series of novels. His most popular work is The Cairo Trilogy, a saga set in this area in the period following World War I 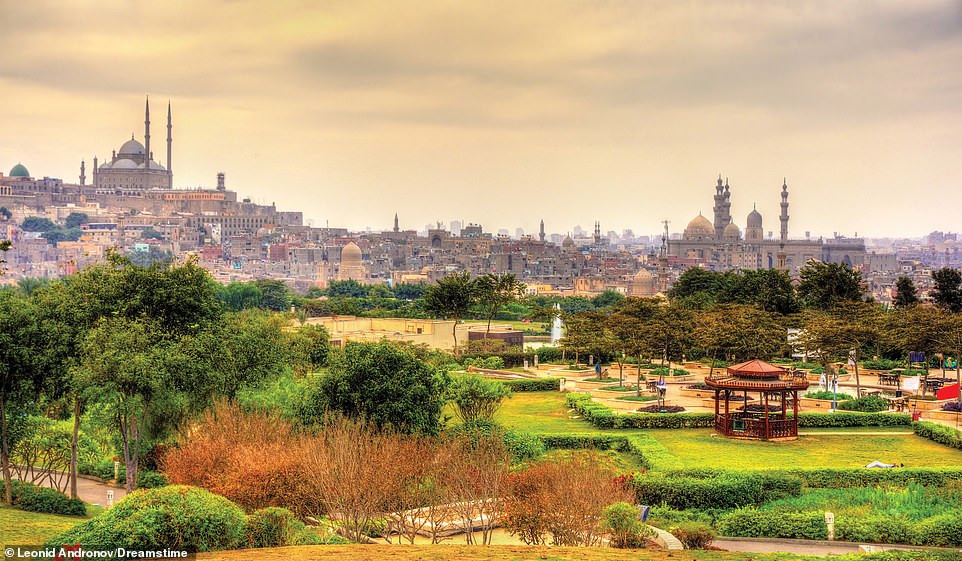 In 1984, the Agha Khan IV visited Cairo and decided to help the city after seeing an area filled with mountains of waste. He gifted 30 million dollars to clear land which had been a rubbish tip for 400 years, and create a vast garden and urban park for Cairenes to escape the crowded streets which surrounded the area. In 2005, this beautiful space opened to the public and worldwide acclaim. Today, Al-Azhar Park provides a vital space for local people to enjoy at the weekend and on public holidays 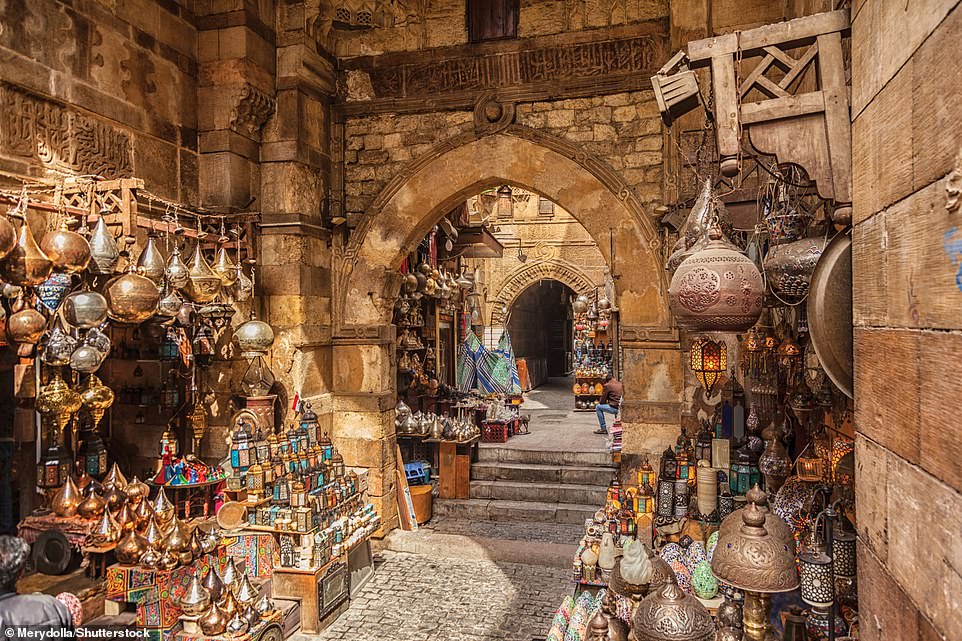 This area in Islamic Cairo is Egypt’s most famous souk (market). Its many streets are divided into areas devoted to specific goods where sellers compete for your business 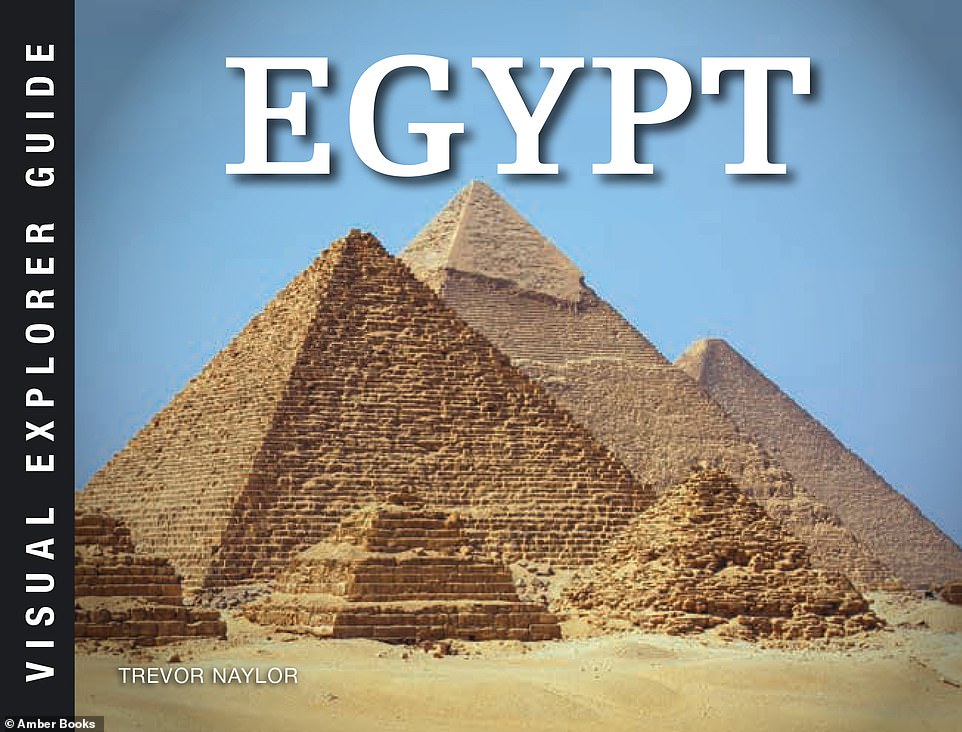 All images are taken from the book Visual Explorer Guide: Egypt by Trevor Naylor (ISBN 978-1-78274-873-1) published by Amber Books Ltd and available from bookshops and online booksellers