From Ms mop to pop Princess

Until 18 months ago, she worked as a cleaner by day and a wedding singer by night – and she admits that The X Factor is ‘her idea of a nightmare’. So how has Suffolk country girl Samantha Harvey, 24, become a social media phenomenon, with 1.3 million followers on YouTube and 2.2 million on Facebook, plus a major recording contract?

The answer is that she sat on her bathroom floor one night, recorded a cover of Sam Smith’s ‘Stay With Me’ and, because someone told her that it would help her to get more wedding bookings, posted it on Facebook. ‘It blew up overnight,’ she says. ‘I remember sitting there with my laptop propped up against the bath. I was refreshing my feed over and over and couldn’t believe I already had 60,000 likes.’

That was in 2014 and the wedding gigs duly rolled in – ‘I still get about 300 emails a week asking me to do weddings but I don’t have the time.’ Samantha recently released a second single, ‘Please’, with Virgin, which reached number two on the iTunes chart and ‘has created a bit of a buzz on Spotify’. Her debut single, ‘Forgive Forget’, also cracked the iTunes top three when she self-released it last summer, landing her a gig at London’s O2 Academy Islington, which sold out in minutes, and catching the attention of Virgin EMI. She has also starred in a docu-series about her life – Samantha Harvey: Released – for Awesomeness TV, one of the biggest YouTube channels, whose film crew followed her around Suffolk, London, Sweden and Los Angeles, ‘charting my progress from country girl and cleaner…to what is going on now, which hasn’t really hit me yet’.

Samantha quickly found herself mixing with big names and industry insiders. ‘I’ve met Simon Cowell and David Beckham, both lovely. David doesn’t talk much. Simon does.’ She is just back from LA, where she met representatives from Capitol Records. With her looks and willingness to engage – she replies to every fan message on Facebook, Instagram and Snapchat – it’s hard to imagine she won’t go down well Stateside, too.

Until 18 months ago, Samantha juggled cleaning through her own business Samantha’s Domestic Services (‘it’s key with any brand to get your name in there’) with wedding singing and recording covers to live-stream. I wonder whether a platform such as The X Factor wouldn’t have been easier for her. ‘I’ve never wanted fame or to be on TV,’ she says. ‘The reason I have such a big following is because I’m not that person. I love live streams because you’re in control of what you put out, rather than being on a show like The X Factor where they can make you out to be something you’re not. Before my gig at the O2 Academy last July, I was so nervous I couldn’t speak. With a live stream, people can see who you really are, and on mine they can see that I am vulnerable and get nervous; they relate to that.’ 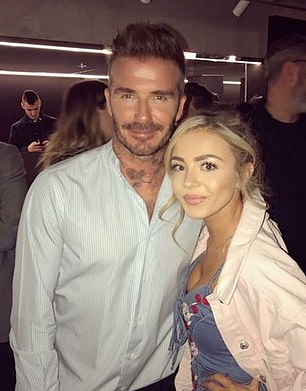 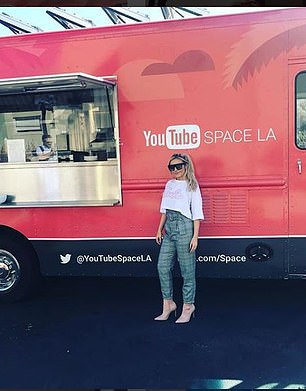 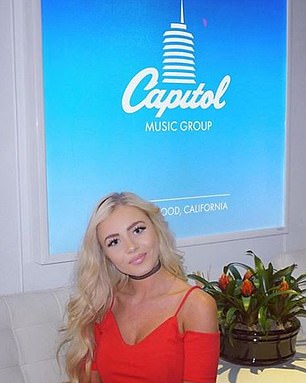 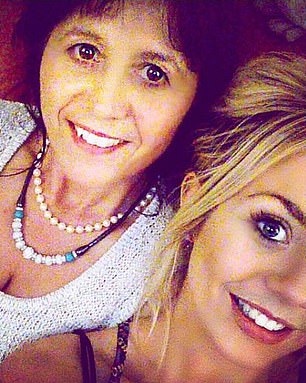 A visit to the LA offices of Capitol Records (left); an Instagram selfie with her mum

Samantha may be a straightforward girl whose main motivation is ‘to buy my own little cottage in Suffolk’ (she currently lives with her mum and dad near the town of Harleston) – but she is also steely. ‘I learned that from my mum, who worked as a cleaner; she was a grafter, fitting jobs around us kids. My dad worked for a shipping company. They keep me grounded.’ Samantha has two elder sisters, both in Suffolk. ‘I am there as much as I can be. I could never live in London; it’s too noisy. Every time I try to record there’s a siren in the background.’

Her performing career began aged eight when she auditioned for an amateur dramatics club. ‘I got cast as a workhouse boy in Oliver! After that, I was hooked.’ She continued in local theatre through her teens and studied performing arts at Suffolk New College in Ipswich. ‘Then I thought, “I’m either going to work on a cruise ship or get a day job and do wedding singing around that.” I went for the latter. I couldn’t have afforded to not earn money while chasing a dream.’ 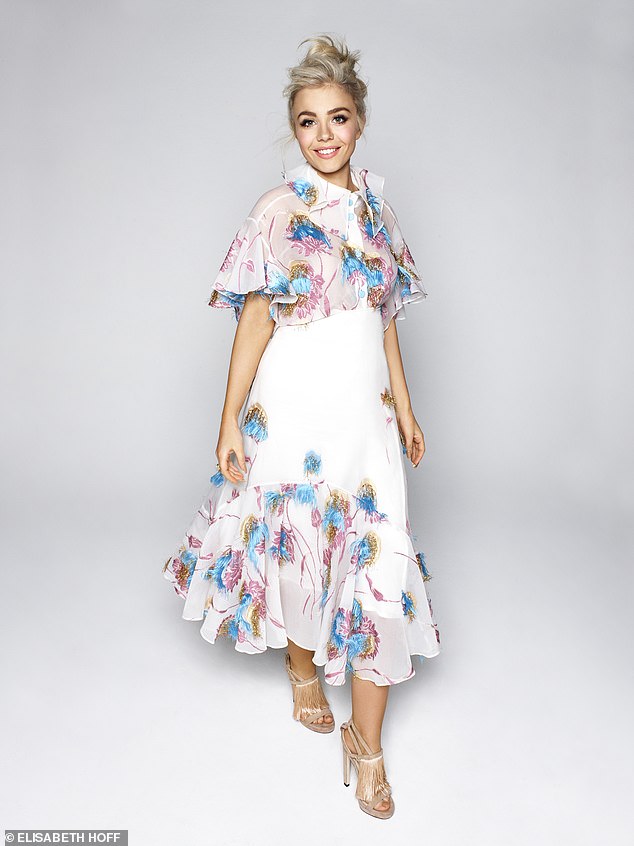 Her musical talent came from her dad, ‘a wicked singer’, and her grandad, ‘who played the organ and piano in church’. They are all supportive of Samantha’s career. One thing that has taken some getting used to is the constant whir of social media in their lives. ‘I document pretty much everything from my work and my family life on Instagram and Snapchat. I’m always putting my mum and dad on there. They say it’s like living with the paparazzi. They are so funny, though; they should be on Gogglebox. I post my nights out, though I do think about what I put out, as I know girls as young as eight are looking, so there’s nothing too risqué. I also make sure I let people know when I am having a bad day because no one’s life is perfect. If I’m dating someone, I try to keep them off it…at first.’

Artists are flattered when you cover their songs. Little Mix always say thanks and retweet it when I cover them

With refreshing frankness, Samantha tells me that she met her boyfriend of two months – a graphic designer – on the dating app Bumble. ‘I approached him, but he didn’t reply within 24 hours, so my message got wiped. He remembered my name, though, and contacted me on Instagram. My work life is so busy that finding someone who can cope with it has been a challenge. Sometimes I can’t reply to messages for hours, because I’m recording or communicating with my fans, and he handles it so well. In the past, I’ve been with people who go crazy if they don’t get a reply within ten minutes.’

By her own admission, Samantha is a seasoned dater. ‘People say to me, “You’ve been through such terrible things” when I’ve talked about boyfriends who cheated on me. But those people are why I can write songs! Thank goodness those situations happened, so I can make great bangers out of them.’ Both ‘Forgive Forget’ and ‘Please’ have lyrics inspired by break-ups. ‘“Please” is about how, when you split with someone, you may think you’ve made the right decision and be happy about it for a few weeks but then you have that comedown, where you worry they are starting to move on and it may be too late to get them back. I knew a lot of people would be able to relate to it.’ 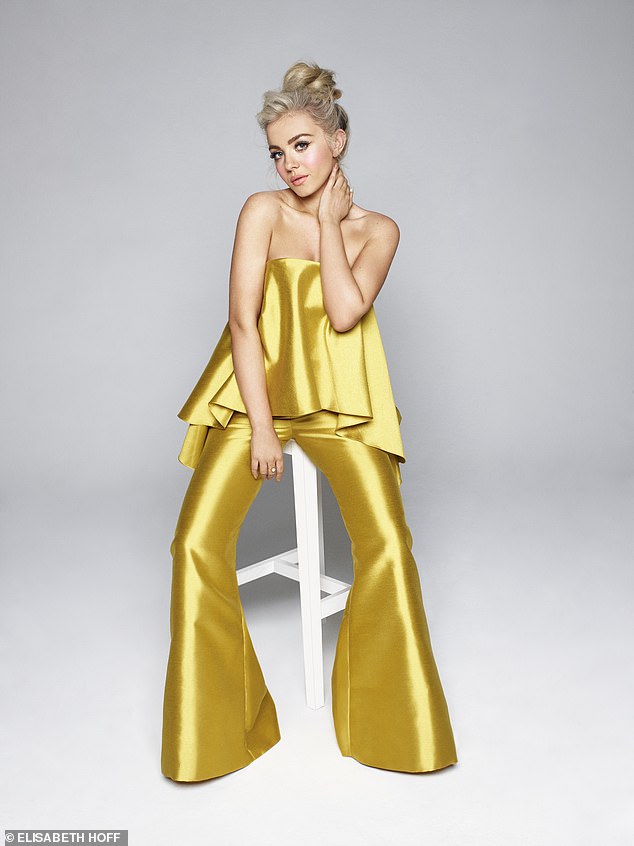 By her own admission, Samantha is a seasoned dater. Suit, Sari Lazaro. Ring, Monica Vinader

It is clear that connecting with her fanbase is a large part of what drives Samantha. ‘Eighty-five per cent of my fans are female. I respond to people, so no one can ever say I’m stuck-up. Once I was sweating in the gym with no make-up on, and this man came up and said, “My daughter follows you on YouTube. Could you record a quick video for her?” Of course, I did it. I never say no because I always think, “What if my mum met my hero, Ed Sheeran, and asked him to do something for me?” If he said no, I would never support him again!’

Although she is now releasing her own music, Samantha is still effusive about the thrill of covering other people’s: ‘It’s showcasing your voice on someone else’s song – on YouTube, you share the royalties; their label automatically takes a cut, but that’s fine because you’re doing it for the recognition. Generally, I find artists are flattered when you cover their songs. Little Mix, for instance, always reach out to say thanks and retweet it when I cover them.’ She believes that this is the best way into the industry. ‘I hope I can be a role model for other girls like me. You have to relax and enjoy it. So many people do covers and if they don’t get more than 100 likes, they cry and say, “Why hasn’t it gone viral?” I think mine went viral because I didn’t really expect to and was just doing what I loved.’

I use Simple Facial Wipes to remove my make-up and The Body Shop Tea Tree Facial Wash with a hot flannel to cleanse before applying Estée Lauder Advanced Night Repair.

I don’t do designer – why would you spend all that money on one pair of shoes when you could get ten?

I love an Indian takeaway and my mum’s chicken curry is my favourite dish ever.

Describe yourself in three words

Music festivals. I’ve been to Latitude and the V Festival. That’s where I can let my hair down and have fun.

I don’t get starstruck because every famous person I have met has been so normal, and I can talk for England. If I met Adele I’d be excited but would just treat her like anyone else.

A lie-in, followed by a cheese and sausage bagel, a bath and a dog walk; then spending the rest of the day in a onesie watching Netflix.

Samantha has now come full circle and is in the happy position of having young hopefuls covering her songs. ‘We did a competition where fans could download the instrumentals for “Forgive Forget” and cover the song. I listened to every single one – there were about 300 entries – and chose a winner, who was then posted out across my socials. It was like a virtual X Factor with me as the only judge. And I’m not as mean as Simon Cowell!’

One of the downsides of her success, says Samantha, is that some of her old friends have been less than happy for her. ‘Some of them are mega-supportive and go to all my gigs, while others never come and don’t ask about my life. If we go out and people ask me for a photo, they’re like, “That’s weird – we just think of you as Sam from school and now you’re Sam from the internet.”’

But if it all ended tomorrow and she returned to her old life, Samantha says she would be just fine. ‘I would go back to cleaning in a heartbeat. It showed me what hard work is and prepared me for what I’m doing now. And I loved being a wedding singer. The songs people ask for at their wedding are often some of my favourites. It’s the best feeling in the world when a bride walks in looking beautiful and you’re singing an emotional song.

‘My dream is that in about five years’ time people whose weddings I sang at will look back at the film of their evening and think, “Wow, we had her singing there.”’