Stunning photo composites capture breathtaking locations as they shift between day and night in a single image.

Incredible photos include a tantalising panoramic of New York and its unmistakable skyline; a couple tenderly embracing among the hustle and bustle of Trafalgar Square; and hundreds of diverse animal species sharing one watering hole in Tanzania’s Serengeti National Park.

Another striking image shows the real beauty of the Falkland Islands and its resident albatrosses.

A bride and groom can be spotted in the foreground of this image capturing the Manhattan skyline. Wilkes took the shot from Brooklyn Bridge Park in 2016. It is just one of hundreds of shots included in his new book, Day To Night 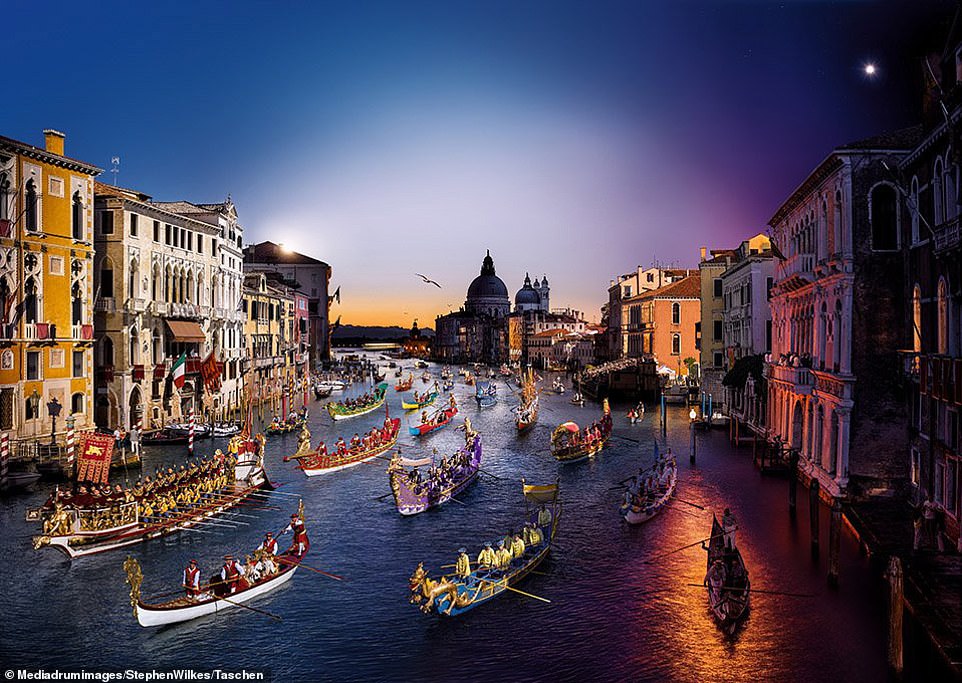 Gondoliers take to the Grand Canal in 16th-century-style boats and garb for the annual Venice Regata Storica. Wilkes took the image in 2015 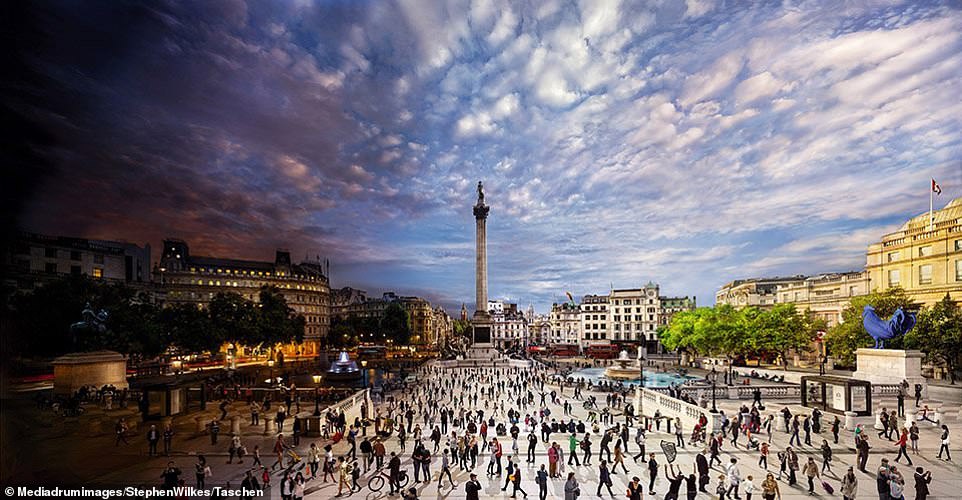 Usually a photo will capture a moment, a static snapshot in time.

But in Stephen Wilkes fascinating new book Day To Night, with a foreword by acclaimed New York-based critic Lyle Rexer, the American photographer has merged hundreds of different images from the exact same spot to create a ‘living, breathing account’ of the distinct landscapes.

‘Day to Night has been a 10-year personal journey to capture fundamental elements of our world through the hourglass of a single day,’ he explained.

‘It is a synthesis of art and science, an exploration of time, memory, and history through the 24-hour rhythms of our daily lives. 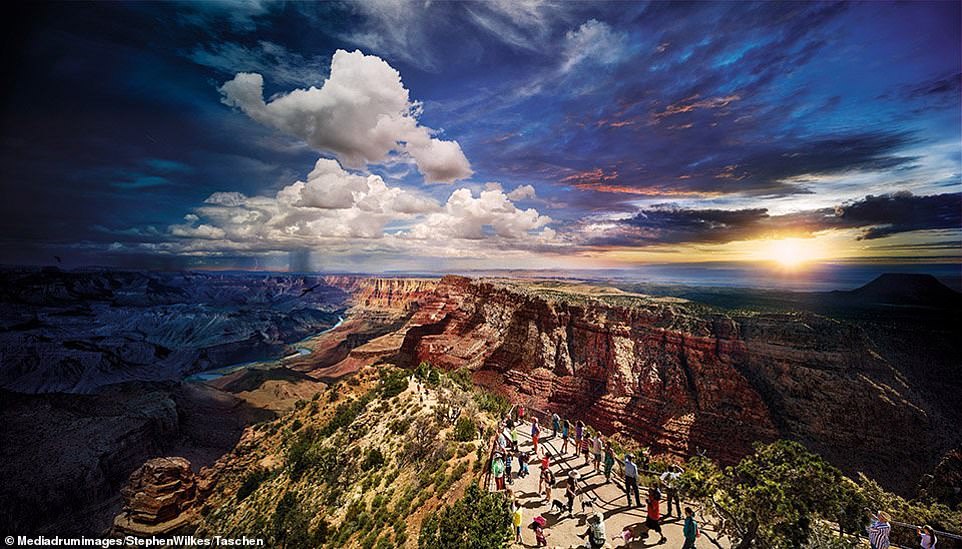 The Grand Canyon’s popular South Rim as seen from the 70-foot-high Desert View Watchtower. Wilkes said of the shot, taken in 2015: ‘I slept on top of a watchtower while shooting for 36 hours. There was, of course, no outside light, so I had to wait for the moon to light the canyon. I had only one hour of exposure to get this right’ 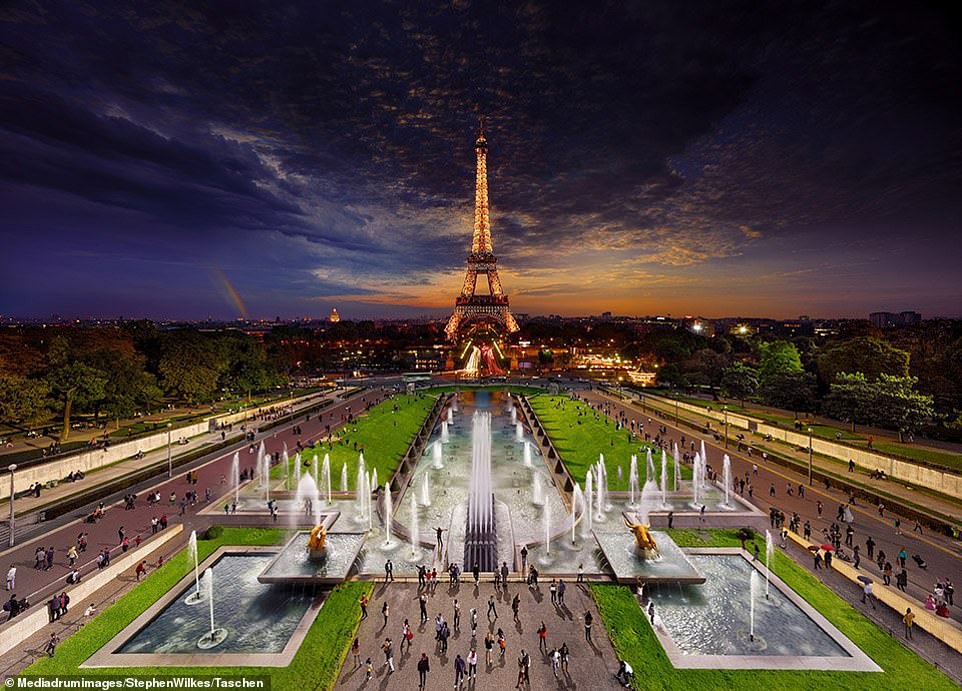 ‘I photograph from locations and views that are part of our collective memory.

‘Working from a fixed camera angle, I capture the fleeting moments of humanity and light as time passes.

‘After photographing as many as 1,500 single images, I select the best moments of the day and night.

‘Using time as my guide, all of these moments are then seamlessly blended into a single photograph – a visualisation of our conscious journey with time.’

A magical shot showing Stonehenge in all its glory. Wilkes said of the image: ‘Late in the afternoon, I noticed people dressed in elaborate, 18th-century gowns inside the circle. The clouds had almost begun to replicate the physical structure of Stonehenge. All of these things came together in in the most magical way’ 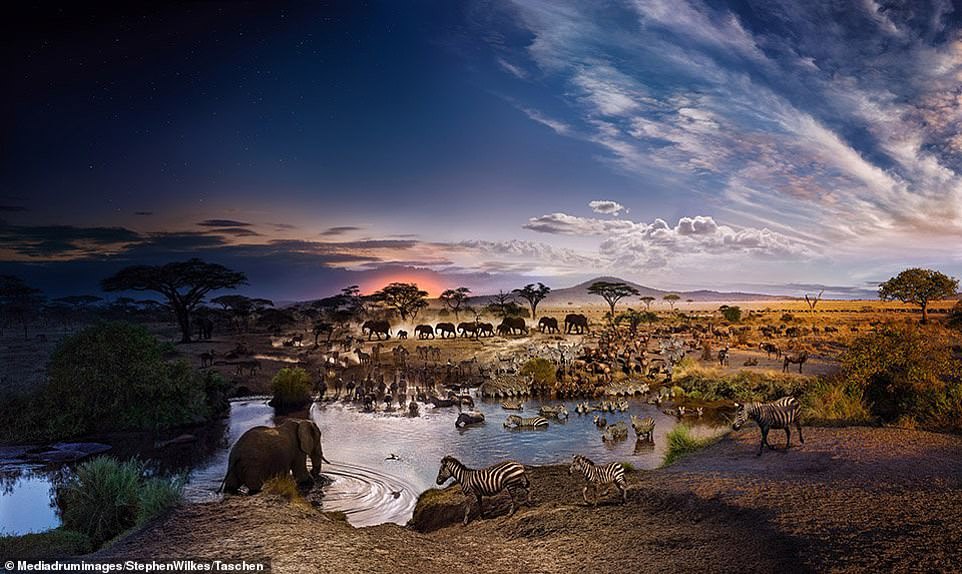 Animals gather around a watering hole in the Serengeti National Park, Tanzania, during a drought. Wilkes said to capture the image, he spent 26 hours hanging out by the spot in 2015. He mused: ‘All of these competitive species shared one watering hole, and they never so much as grunted at each other. They seemed to understand the act of sharing’ 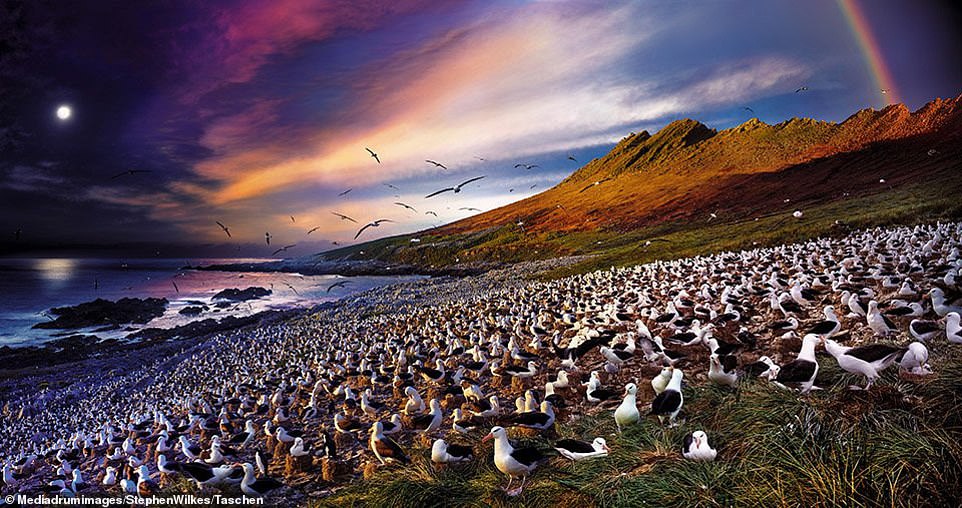 Wilkes said of this shot, taken at a remote spot in the Falklands Islands: ‘The World Wildlife Fund has a house on Steeple Jason that I was fortunate to stay in. The island is sparse with few visitors – maybe 50 people have ever set foot on the island. I spent 36 hours photographing the nuanced behavior of the black-browed albatross that in a lifetime can fly 1.5 million miles and mate for life’

Vast and extraordinarily detailed, Wilkes’ images capture not just the location, but rather a day in the life of that location. Wilkes’ process is intensive, the editing painstaking, and the choices agonising.

‘The landmarks become our shared heritage, not as frozen, immovable images, but as steadfast bastions of a living, evolving humanity.

‘In a world where humanity has become obsessively connected to personal devices, the ability to look profoundly and contemplatively is becoming an endangered human experience,’ Wilkes continued.

‘Photographing a single place for up to 36 hours becomes a meditation.

‘It has informed me in a unique way, inspiring deep insights into life’s narrative, and the fragile interaction of humanity within our natural and constructed world.’ 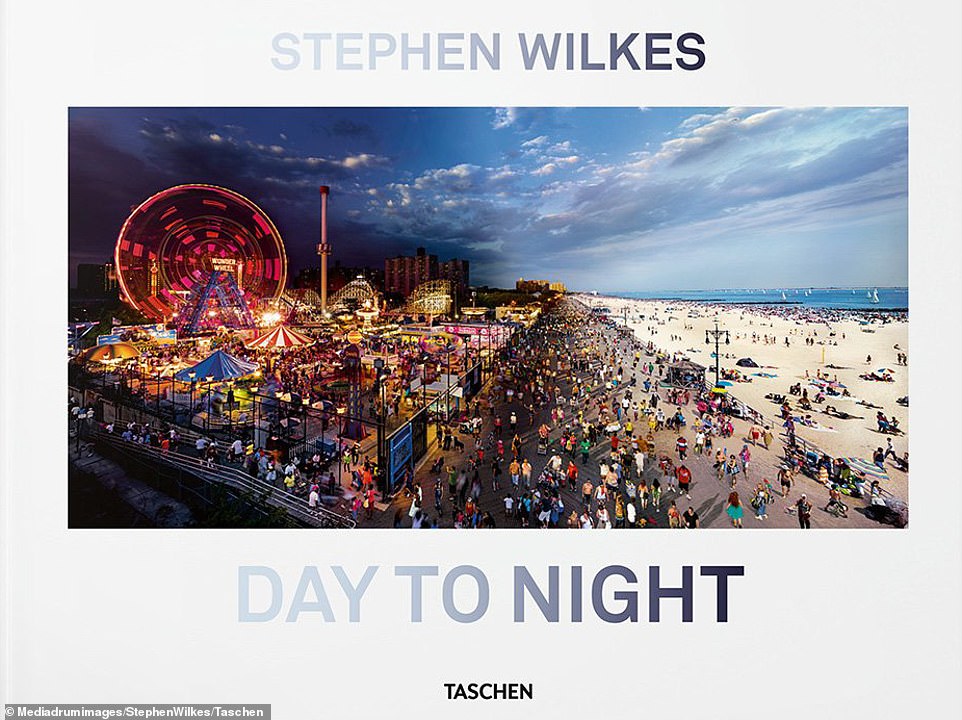 Stephen Wilkes’ Day To Night, published by Taschen, is available now priced at £100